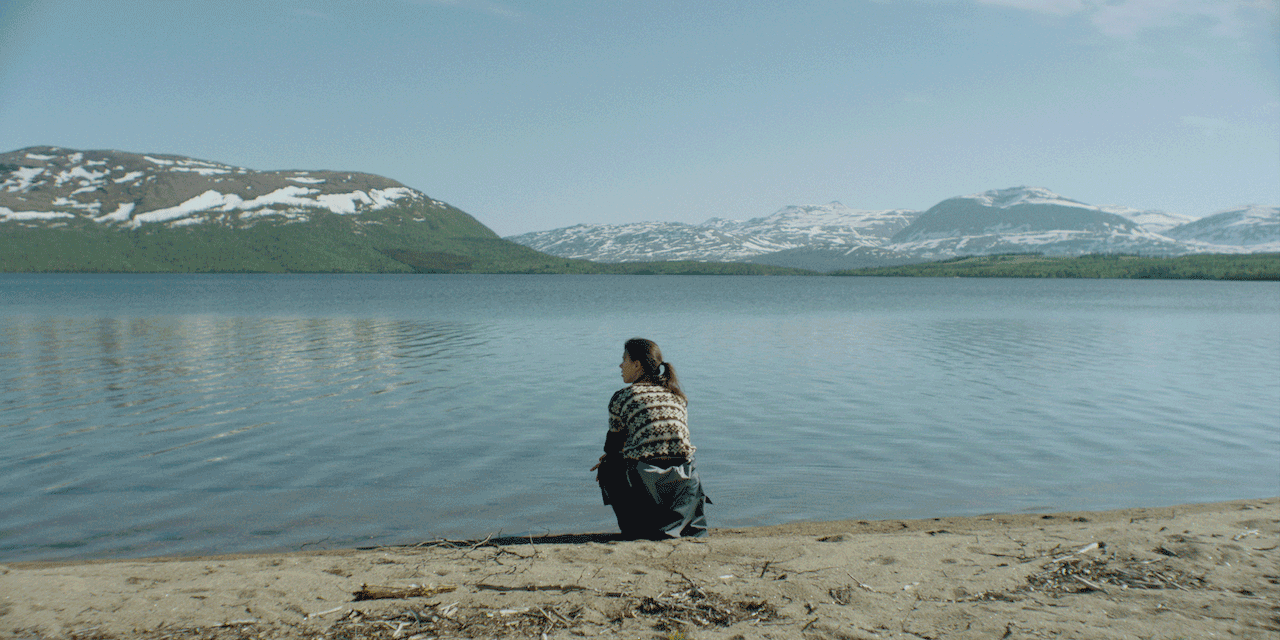 Outlier – currently thrilling viewers on All4 – is an unlikely showreel for Northern Norway: audiences get the views but are left in no doubt that they come at a cost.

In the latest noir sensation from Walter Presents, the body of a missing teenage girl is discovered in a trailer park in northern Norway. Within days the regional police believe they have their man. However, in London, Maja Angell is less certain. Maja comes from the same small rural town and is now studying criminal psychology, a career choice informed by some vague and unsettling events in her past. Returning home, she begins her own investigation and soon ruffles the feathers of the local, all male, police department, who quickly disregard her theory that there is a serial killer at large. 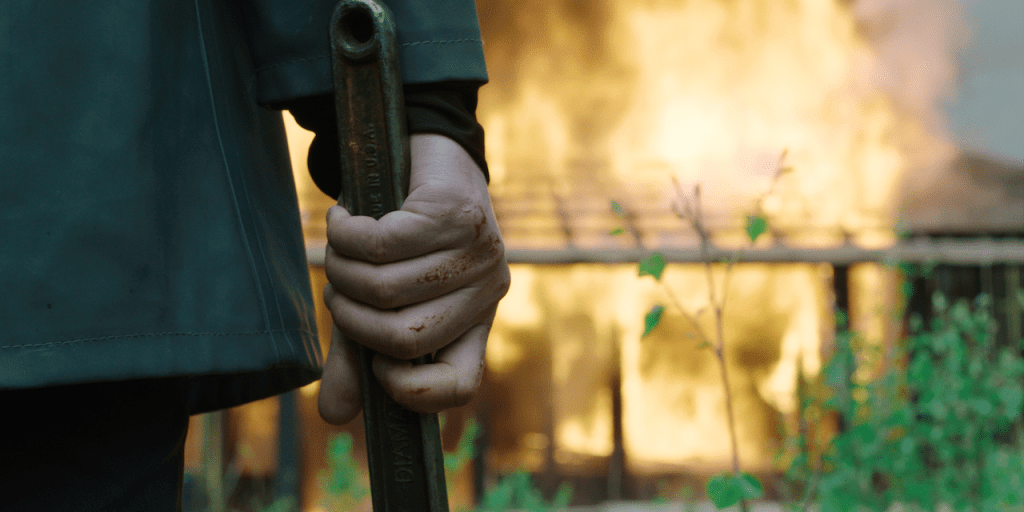 Filmed in the widescreen landscape of Øverbygd in Troms-Finnmark, Outlier is less of a whodunnit – that is revealed early on in the series – than a tense waltz of wits between Maja and the culprit. As the clock ticks down on the fate of another kidnapped girl, this dance is further complicated by police failings, family secrets and a claustrophobic community.

“I kept getting these directions to stop smiling”
Hanne Mathisen Haga

Blunt, rude, authority-provoking, Maja is as annoying as she is determined. “I kept getting these directions to stop smiling,” says Hanne Mathisen Haga, who plays Maja to bracing effect. “But then it started making sense, that she doesn’t give too much, she protects herself. But it was challenging to not be polite.” The character’s brusqueness is just one example of how the drama plays against Norwegian national traits. “We are quite polite and we operate in a rather strict social system. I read that we’re in the top three countries who punish each other when we don’t act correctly.” 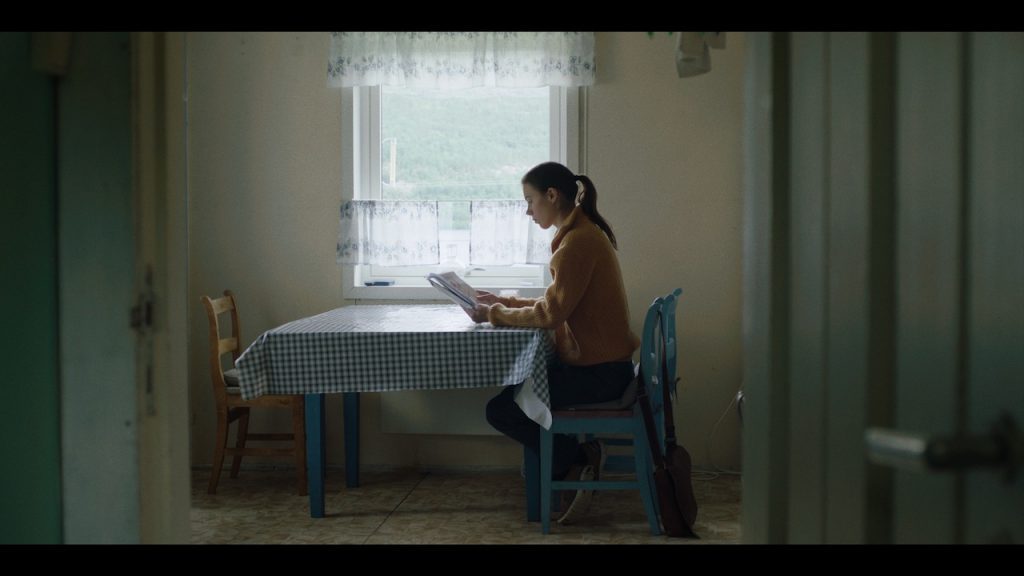 Characters require contrasts, states Kristine Berg, who co-created the series with her writing partner Arne Berggren. They require “something dark, secret or weird, so they don’t get too perfect.” Indeed, on the screen, the atypical has now become the norm: in recent years, dark Norwegian drama has delivered an accidentally murderous wife (Twin, currently available in the UK on BBC iplayer), a policewoman-cum-foster-mother (Eyewitness) and a female army officer turned sleuth (The River, another Berg drama).

Berg and Berggren run Shuuto, a production company with a particular emphasis on telling stories set in the remote north. “From the outside looking in, Arne and I are an odd writing couple but I think it’s good to have both a male and a female writer,” Berg says. “I’m quite young, he’s in his sixties, and we come from different backgrounds. But I feel that we have the same curiosity.” Gender politics are not their chief consideration. “It’s about finding the right character for the right story. For me, and I think for Arne as well, it’s not about the gender of the character, it’s about making something interesting and something that is dynamic and has multiple sides to it. It has to feel alive. If it becomes a female character then great, if it becomes a male character great.”

Their cast and crew are often recruited from the territory (several of the stars of Outlier also appear in The River). This is what separates them from their competition, says Berg. While Netflix provides a global range of locations in their dramas “they all look the same, feel the same and taste the same.” 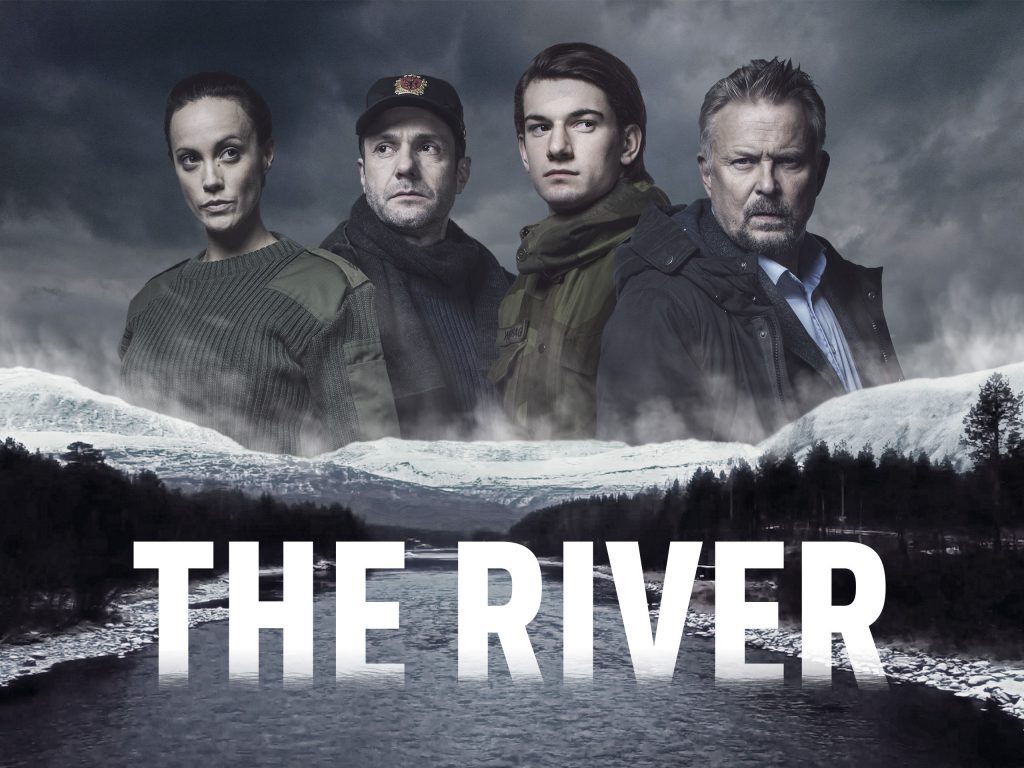 For Berg and Berggren, a sense of place is paramount. Achieving this has been helped by some unusual filming facilities. “There is a studio in the middle of nowhere called FilmCamp,” Berg explains. “In the far north, in the woods, two guys bought a military camp which has been there since the 1950s and the Cold War. Now it is empty of military equipment and they have opened up a studio.”

Mathisen Haga was born even further north, near the border with Finland but, she says, filming Outlier – which provided one of her first lead roles – was still “in the hood”. And while iconic Nordic Noir performances, such as those by Sofie Gråbøl in The Killing and Sofia Helin in The Bridge, could have proved intimidating, she was undaunted by the shoot: “It’s encouraging that they are there. It’s more about trying to not replicate. It’s easy as an actress to think this has been done before, how am I going to make this character come alive.” 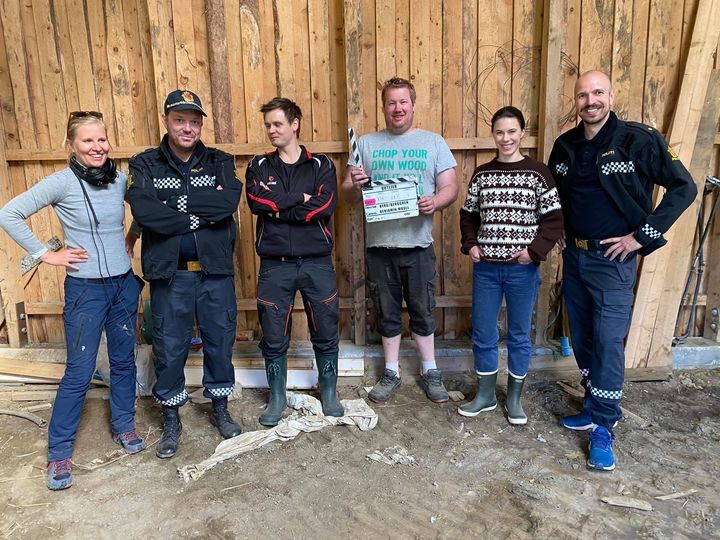 Berg agrees that the genre has strong foundations. “They have become references. You have to know them like you have to know your Shakespeare or your Ibsen,” she says, adding that new writers need to have fun with the themes while providing elements that the audience can recognise: “Ah, she’s wearing the woollen sweater, now I know where this is going,” laughs Berg. The job of the writer is to then take the audience on unexpected detours.

“The sad truth is that, yes, it could have happened.”
Mathisen Haga

Authenticity is a mercurial target, however. In addition to online research into the field of criminal psychology, Mathisen Haga asked her father, a former policeman, if he thought the plot of Outlier was plausible: “How can it be that cases slip through in such a small community, how is it possible that so many people can know that things aren’t right? The sad truth is that, yes, it could have happened.” 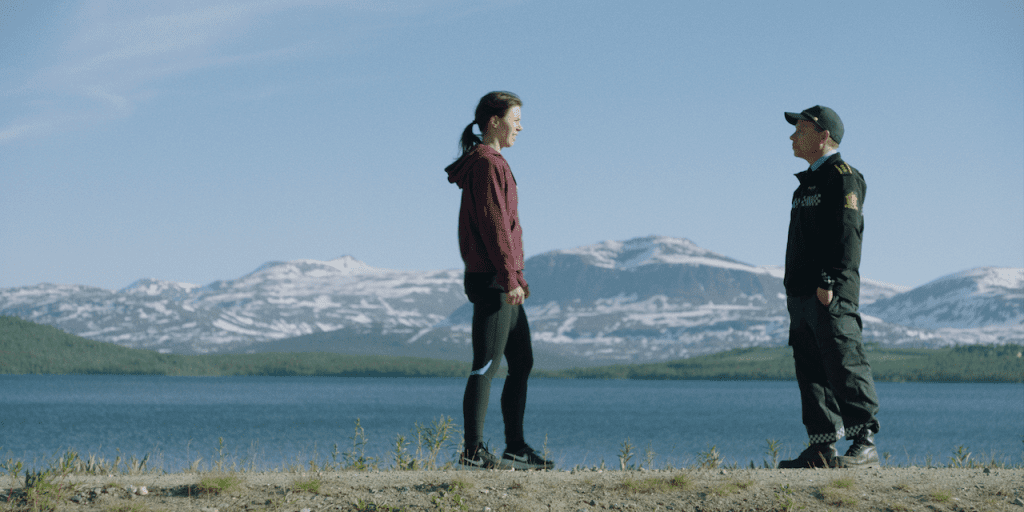 The northern extremities of Norway provide a complex environment for women, observes Mathisen Haga. It is both a very masculine environment, in which men work in traditional industries such as fishing, logging and farming, but there is also a custom of women being resilient and a key participant in all aspects of everyday life. “As a girl, if you know how to shovel snow, fish and drive the scooter then that’s good,” she says. “It doesn’t diminish your femininity. It’s extra.”

Maja is both detective and victim. Was this a complicated sensibility to portray on screen? “As an actress, you’re used to working with conflicts. What I was most afraid was that the audience wouldn’t be able to see the fragility in her,” Mathisen Haga says. “The one thing doesn’t exclude the other.”

Fresh takes on genre – and gender – tropes abound. Another drama in the Scandinavian season is the second series of The Truth Will Out, a Swedish police procedural helmed by the Norwegian film and television director Camilla Strøm Henriksen, which features a heavily-pregnant former alcoholic as one of the investigators (a mesmerising performance by Louise Peterhoff). And then there is Catch and Release, another forthcoming series from Berg and Berggren, which follows a dying policewoman pursuing her final case. 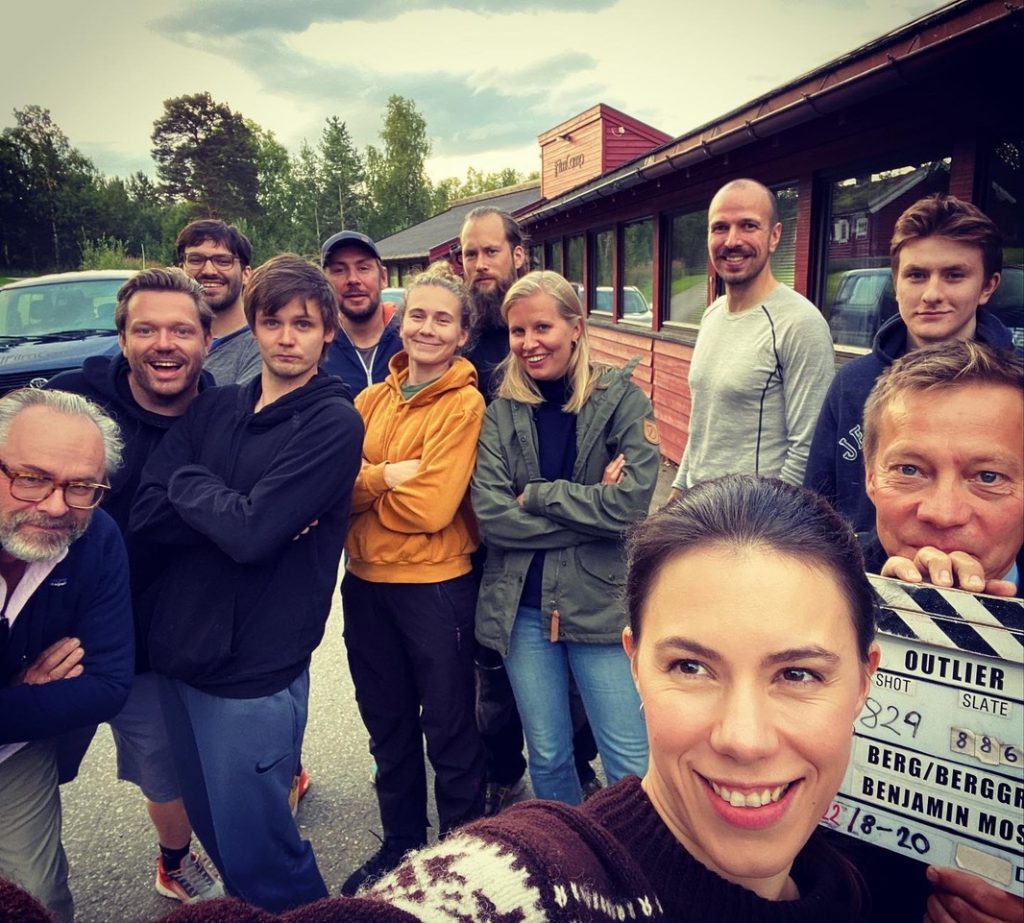 Cast and crew on location for Outlier, with Arne Berggren on far left (Photo: Shuuto AS)

Confident women continue be a fruitful source of inspiration. Berg believes that Scandinavia in general, and Norway in particular, has a strong record with gender equality. “We have a lot of female bosses and politicians. So, there are a lot of female role models,” says Berg, adding that Outlier examines the anomaly: “The police force has been a place where there has been male dominance. It’s a bit of a special case.”

However, as Mathisen Haga reveals, the show’s search for verisimilitude is as much whimsical as it is criminal: “Personally, if I go home or to the cabin, then yes you could see me wearing the same knitwear for a week.”

Outlier is available now on All4

The Walter Presents ‘Scandi Takeover’ season continues throughout the spring

20 January 2022 / Christian House is a freelance arts and books writer for Financial Times, Sotheby's and The Art Newspaper. Categories