Oslo Philharmonic: A Century of Grieg, Tours and 12-Tone Techniques

As the Oslo Philharmonic marks its centenary with an appearance at the Barbican in London, Andrew Mellor looks back over a hundred years of orchestrating events through war, peace, hard times and prosperity.

Misery is the chief by-product of war but if a handful of good things had their origins in the conflict that ravaged Europe in the 1910s, the Oslo Philharmonic is one of them. Bergen and Trondheim dominated Norway’s music scene until the early 18th century but when the centre of gravity finally shifted south, Oslo and its inhabitants were unprepared. One concert society had already failed and another, established by Edvard Grieg and Otto Winter-Hjelm, finally collapsed in 1919 after war-induced inflation. 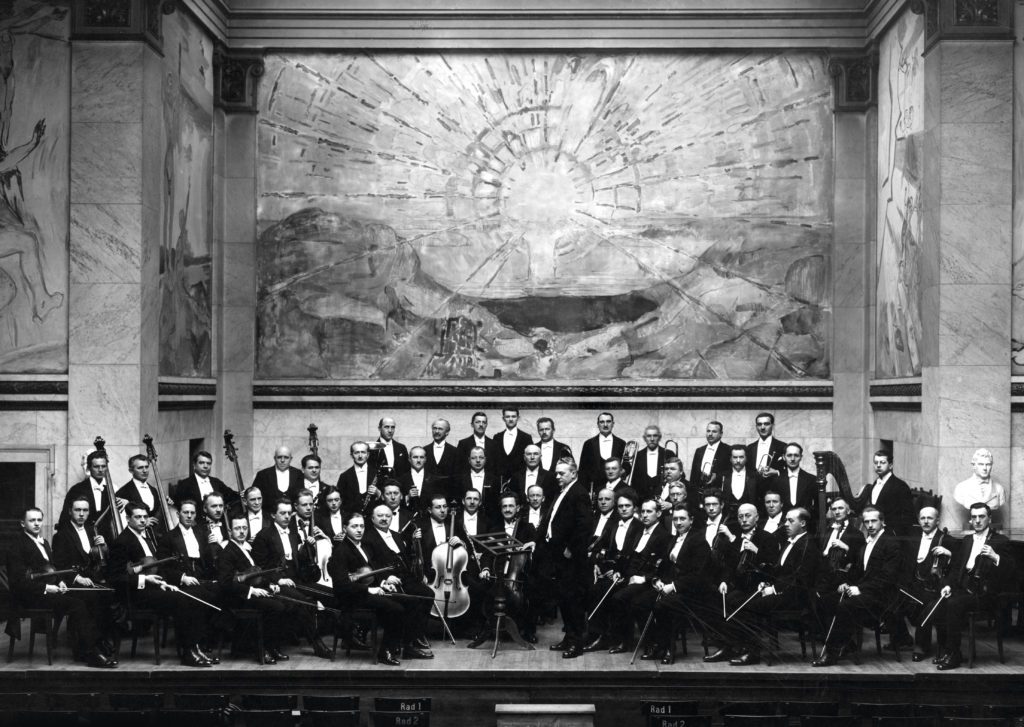 Norway remained neutral during the war but its trade suffered and its people were politicized. Their appetite for music only increased, and the vacuum left by the collapse of Grieg’s ‘Musikforening’ was there to be filled.

It was, and quickly. The first concert of the newfangled Filharmoniske Selskap (Philharmonic Society) on 27 September 1919 was nothing if not nationalistic. Oslo’s first permanent symphony orchestra played Johan Svendsen’s Festpolonaise, Christian Sinding’s Symphony No 1 and the piano concerto and stirring hymn Landkjenning by Grieg. Georg Schnéevoigt, an experienced facilitator from Finland, conducted. 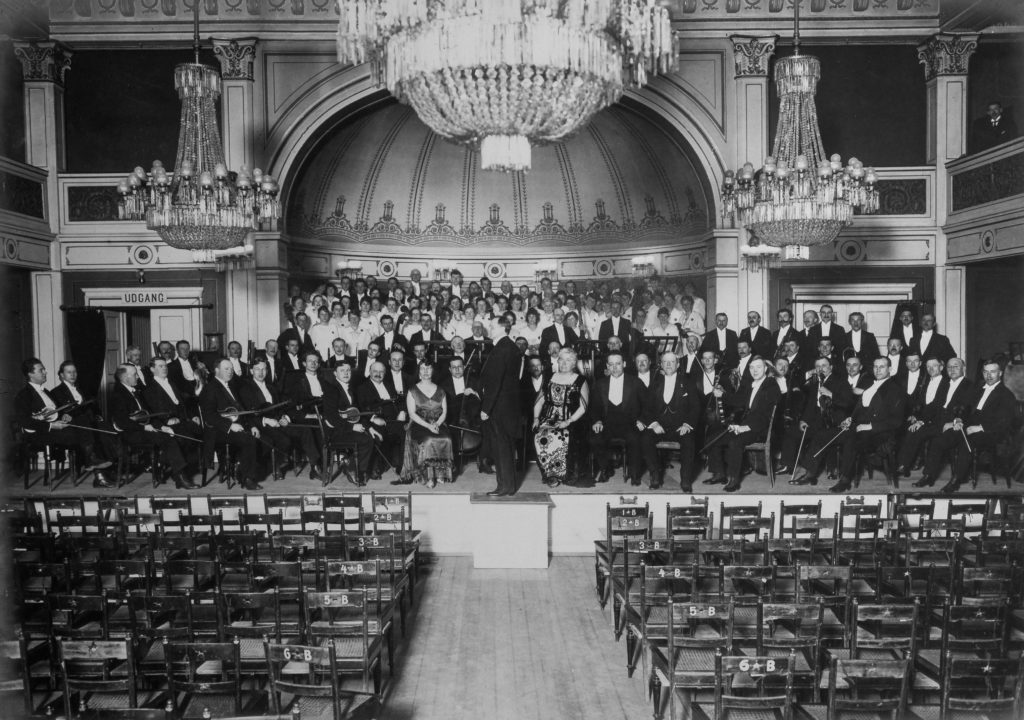 Musical nationalism was on shaky ground at the time. In a changing Europe, what was music’s purpose? Should an orchestra in the Norwegian capital occupy itself and its fresh-eared audiences with music by Grieg and Sinding, Beethoven and Mahler or Stravinsky and Debussy? How much time should be given over to contemporary Norwegian voices and how much to allowing international currents to wash into a still young country via its capital’s even younger symphony orchestra?

These are the questions the early Oslo Philharmonic (as it was officially branded in 1980) asked itself. Even from the inside, there were conflicting answers. In the orchestra’s first season, there was indeed music by Mahler, Debussy and Grieg (much of it brand new) and also by fellow northern Europeans Carl Nielsen, Vasily Kalinnikov and Selim Palmgren. The celebrated Austrian conductor Felix Weingartner visited to conduct a second performance of Sinding’s determined Symphony No 1, a work, like so many others by composers of Sinding’s vintage, with a Leipzig-derived German accent.

Young Nordic composers were generally sent to Leipzig to study in the school founded by Mendelssohn and later presided over by Niels Gade from Denmark, whose preeminence in both Leipzig and Copenhagen was one reason for the pan-Baltic link. But Oslo’s own conservatory was now into its third decade. Grieg had demonstrated that Leipzig training, however useful, didn’t have to result in a Leipzig style. Sibelius in Finland and Nielsen in Denmark, meanwhile, proved that Nordic music could and should follow its own paths, however diverse. 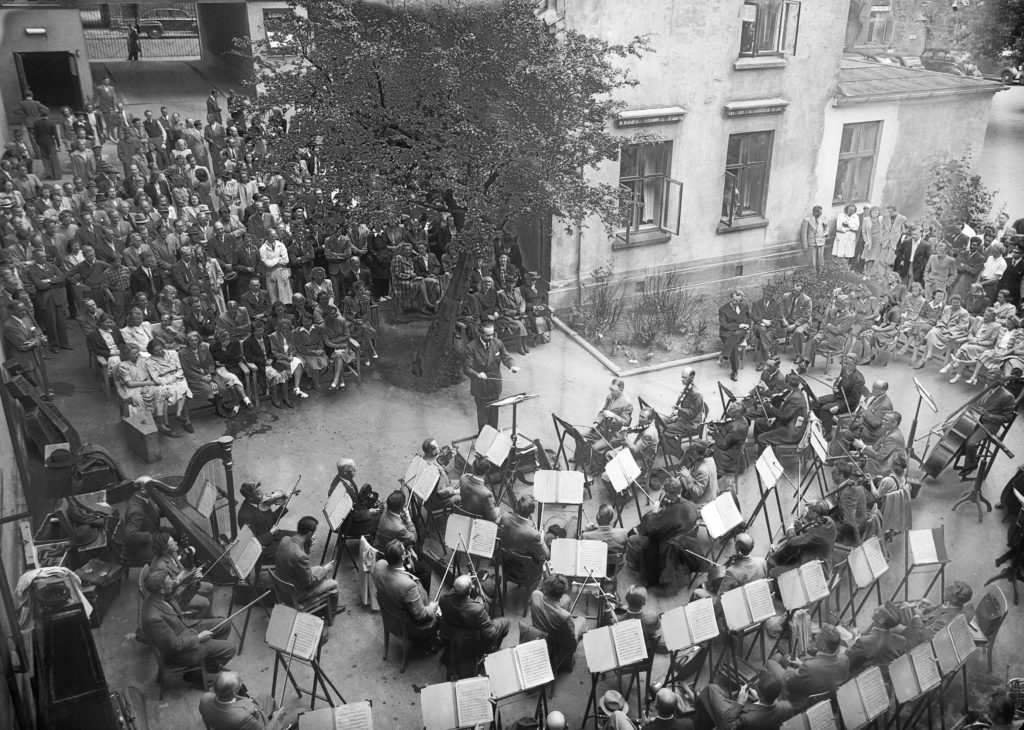 The Oslo Philharmonic performing outside in Oslo in 1947 (Photo: Oslo Filharmonien)

As such, a bright young man named Olav Kielland, one of the Oslo Philahrmonic’s first named conductors, made a strong impression with his own Symphony No 1 (1935). He remained the orchestra’s artistic director until 1945, at which point war once more had a curiously benevolent effect on Norwegian music life: Kielland was offered a senior conducting position with the New York Philharmonic in 1939, but the danger of crossing the Atlantic prevented him from accepting.

In the 1920s and 30s, intriguing new voices emerged in Norway. The Oslo Philharmonic gave its first performance of Ludvig Irgens-Jensen’s monumental and meticulous Passacaglia in 1929, and of his equally enthralling Theme with Variations in 1934. In 1939, David Monrad Johansen wrote his symphonic homage to the ‘forces of nature at work’ in Knut Hamsun’s writing: a lean and borderline impressionistic score titled Pan. Johansen’s son Johan Kvandal came to prominence in the second half of the century; he finished his piano concerto for the pianist Håvard Gimse in 1998, the year before he died. Modern recordings of both works have made by the Oslo Philharmonic.

On 9 April 1940, the Nazi fleet cruised ominously into the Oslo Fjord bringing the Second World War to Norway (barely a week before, the German conductor Wilhelm Furtwängler had been on the Oslo Philharmonic’s podium). At the end of the occupation, Norway welcomed King Haakon VII back from exile with a celebratory concert from the orchestra, which included works by Grieg, Svendsen, Irgens-Jensen and Johan Halvorsen conducted by one of its formative musicians, Odd Grüner-Hegge. Five years later, the ensemble inaugurated the city’s striking new redbrick Town Hall designed by Arnstein Arneberg and Magnus Poulsson, presenting Irgens-Jensen’s choral-orchestral work Canto d’omaggio underneath the Hogwarts-esque staircase of its huge atrium.

The post-war years again focused minds on the need to foster locally distinctive but internationally relevant voices. One of the most significant was that of Fartein Valen, the gentle serialist from Norway’s west coast whose highly crafted works have never had the recognition they deserve. The Orchestra made the first recording of Valen’s calligraphic Violin Concerto, with soloist Camilla Wicks and conductor Øivin Fjelstadt. Klaus Egge, who pioneered his own distinctive 12-tone technique, was active in the post-war years too, writing symphonic and concertante works and orchestral songs (he built enough of a reputation overseas to have his Symphony No 4 commissioned by the Detroit Symphony Orchestra). An invigorating presence in these years was that of the composer and critic Pauline Hall, who as founding chair of Ny Musikk from 1938-61 was a catalyst for so much innovation and confidence among Norwegian composers. 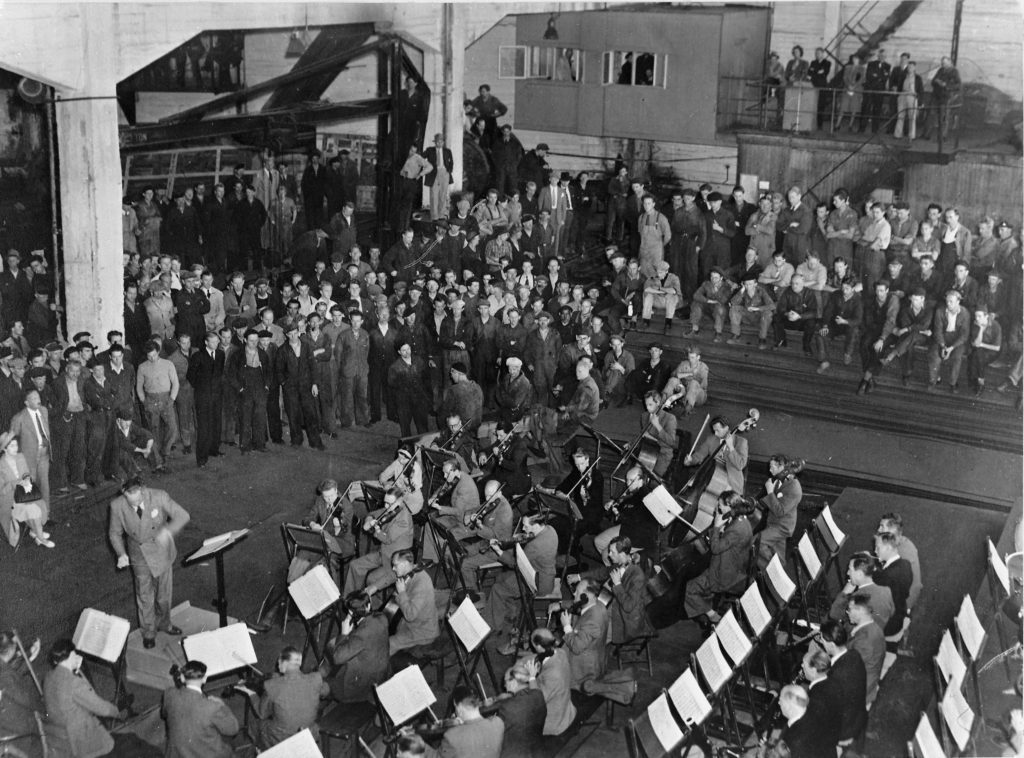 As the world order settled and lines of communication laid new economic foundations, Norway and her neighbours were beginning to see the importance of looking outwards. In the Oslo Philharmonic, the seeds had been sown with visits in the 1920s and 30s from first-rate international figures including Pierre Monteux, Maurice Ravel, Karol Szymanowski, Poul Hindemith, Thomas Beecham and Adrian Boult. In 1956, the orchestra made the first ever commercial recording of Wagner’s Götterdämmerung, starring soprano Kirsten Flagstad, conducted by Fjelstadt, and released on London label Decca.

In 1962, the orchestra ventured physically out of Scandinavia for the first time, touring to Amsterdam, Berlin and Frankfurt. With Fjelstadt and Herbert Blomstedt in charge (the latter, remarkably, will conduct again in this anniversary season), the ensemble was starting to build its own sound culture. One critic listening on that tour noted the “new accent” it brought to the European orchestral scene. Foundations were laid for the era that would make the Oslo Philharmonic world renowned: the appointment of Mariss Jansons as Chief Conductor in 1979, two years after the opening of the Oslo Concert Hall. 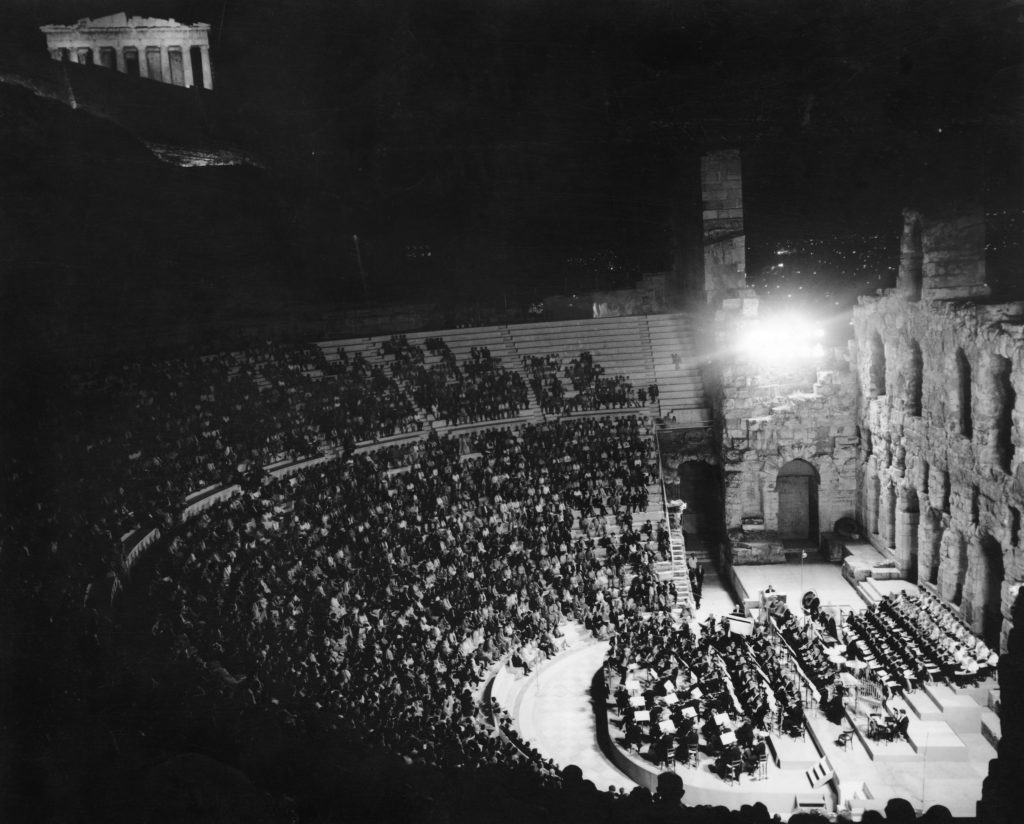 Jansons took the orchestra apart, worked on every section of it individually, and put it back together again to make one of the most formidable and charismatic orchestral ensembles in the world. Audiences started to encounter the orchestra’s silky, focused string sound and smooth-blend brass and winds, even in performances that transcended those qualities. Jansons initially schooled the orchestra in Russian repertoire: first Tchaikovsky (with a series of recordings still discussed today), then Stravinsky and Shostakovich. At the orchestra’s 75th birthday concert in 1994, he conducted a performance of Schoenberg’s Gürrelieder, which had first been on the orchestra’s music stands in 1927 when less than two decades old.

Also on the menu during that celebratory year were Egil Hovland’s new Piano Concerto and other newly-commissioned works by enfants terrible Lasse Thoresen and Olav Anthon Thomessen. During his tenure, Jansons recorded music by half a dozen Norwegian composers and performed many more in concert. He negotiated the grotesque, humorous and wildly melancholy world of Harald Sæverud, and showed his vast experience in the sophisticated post-Romantic architecture of Finn Mortensen’s Symphony Op 5, arguably the finest symphony written in Norway. He made a memorable recording of Canticum, a beautiful miniature by the former Oslo Philharmonic violinist Carl Gustav Sparre Olsen.

The orchestra’s centenary falls at a fascinating time for Norwegian music. There has been the opportunity to commission more music from Thoresen, still ‘terrible’ if not so much of an ‘enfant’ (he is now Professor of Composition at the Norwegian State Academy of Music) and to call upon a generation of new composers including Øyvind Torvund, Gisle Kverndokk, Rolf Wallin and Therese Birkelund Ulvo, the breadth of whose work demonstrates how eclectic the music scene has become. Other new works include the Cello Concerto by Finnish composer Esa-Pekka Salonen, who served as Permanent Guest Conductor from 1984-89. Almost all these composers, even in their diversity, demonstrate certain longstanding values in Nordic music – notably, a tendency towards rigorous, efficient design whether heard as a principle of overall form or in a general lack of wasted notes. 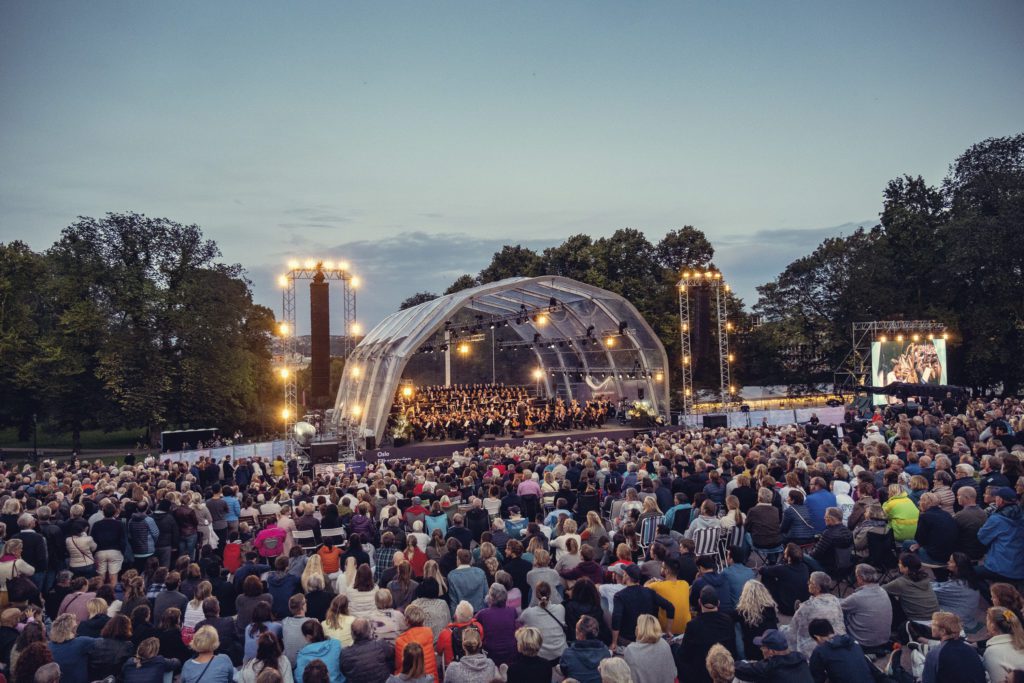 The Oslo Philharmonic performing in Slottsplassen in Oslo in 2019 (Photo: Oslo Filharmonien)

The centenary season will look backwards as well as forwards. It revives thrilling, brutalist music by Arne Nordheim, gems by Irgens-Jensen (his delicious song cycle Japanese Spring) and Pauline Hall (whose Verlaine formed part of the centenary concert on 27 September). That concert also referenced the very first, 100 years ago, with a movement from Grieg’s Piano Concerto and Henrik Hellsetenius’s new reimagining of Grieg’s Landkjenning.

In London on 22 October, the Oslo Philharmonic’s current Chief Conductor Vasily Petrenko is set to channel its illustrious pedigree in Russian music with Shostakovich’s Symphony No 10. But before that, he conducts the piece many associate with Norway most of all: Grieg’s Piano Concerto. Leif Ove Andsnes hadn’t played the work in public for 12 years when he returned to it for the first time this summer, a return marked by fingerwork of freshness, vigor and clarity. He is a player of colossal experience who values his roots yet still, in comparison with the greats among which he can take his place, apparently remains ever young. The same can be said of the Oslo Philharmonic.

The Oslo Philharmonic will be performing at the Barbican Centre, London, on 22 October 2019

Top Photo: Members of the Oslo Philharmonic celebrating their centenary in 2019 (Oslo Filharmonien)