As Jaga Jazzist release their ninth album, Pyramid, BBC Radio 3 presenter Fiona Talkington explains how the experimental collective became part of the soundtrack to her life.

I’m going through my Jaga Jazzist ‘archive’ and discover a press release from 2004 in which the band is described as “the Norwegian fusoid jazznut drum twiddle merchants from the land of the midnight sun.” The quote seems to sum up the music world’s attempt, back then, to describe the indescribable: the sound, the appearance, the charisma of this multi-instrumental 10-piece group of musicians who could whip audiences into frenzied, creative, joyful disbelief. 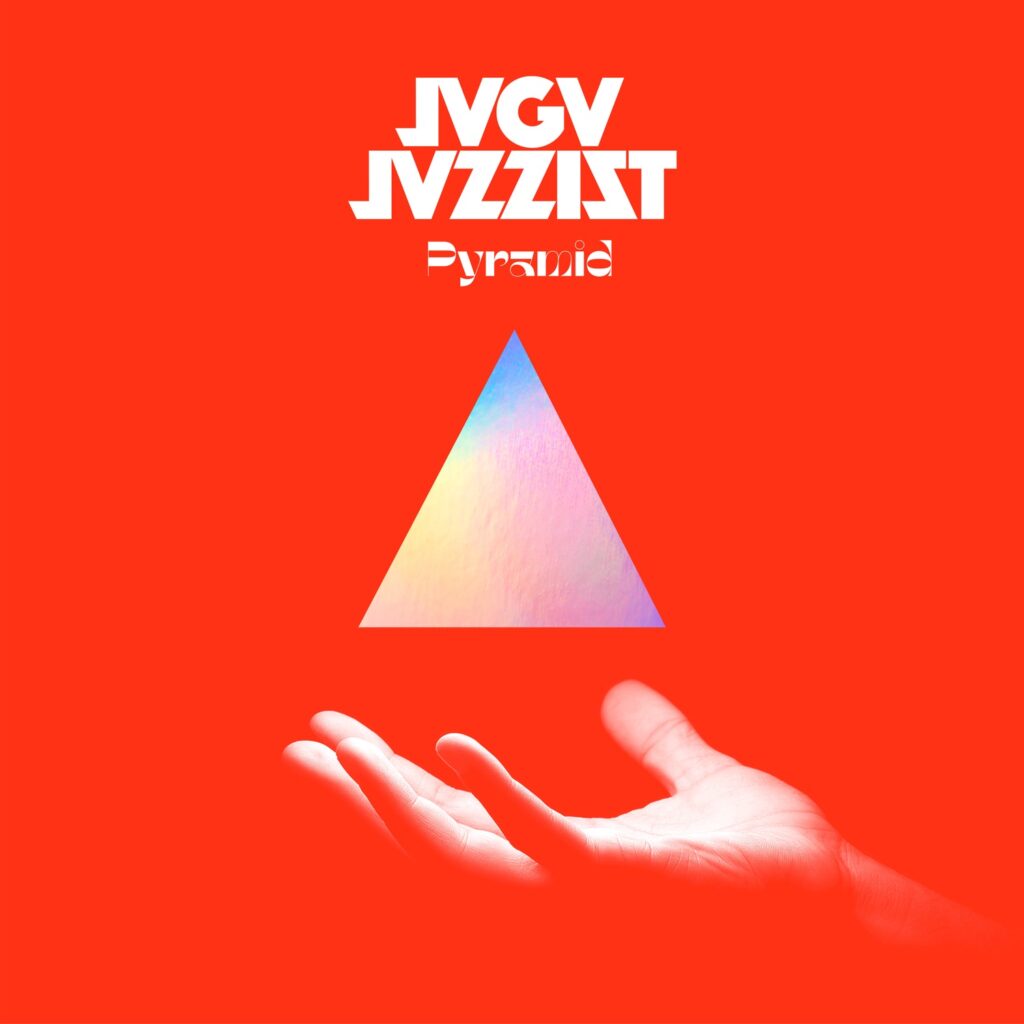 Fast forward to 2020 and Pyramid, a technicolour wonder of the music world. A vast soundscape with the sensibilities of chamber music at its heart, Jaga’s ninth album in what the group’s composer Lars Horntveth describes as a “very long journey”.

A few months ago, I attended the band’s 25thanniversary concerts in Oslo. I had fallen under their spell in 2001 at the International Jazz Festival in Molde on the west coast of Norway, swept away by their driving energy, taunting melodic motifs and gravity-defying harmonic shifts. A few weeks later a CD arrived in the post from their record label. “This is the band you heard in Molde” read the note. The CD was A Livingroom Hush recorded in 1999, and released by Warner Music Norway(later reissued by Ninja Tune in 2002). The track ‘Made for Radio’ was just begging to be on my playlist for Late Junction on BBC Radio 3. Listeners were as surprised and delighted as I had been. 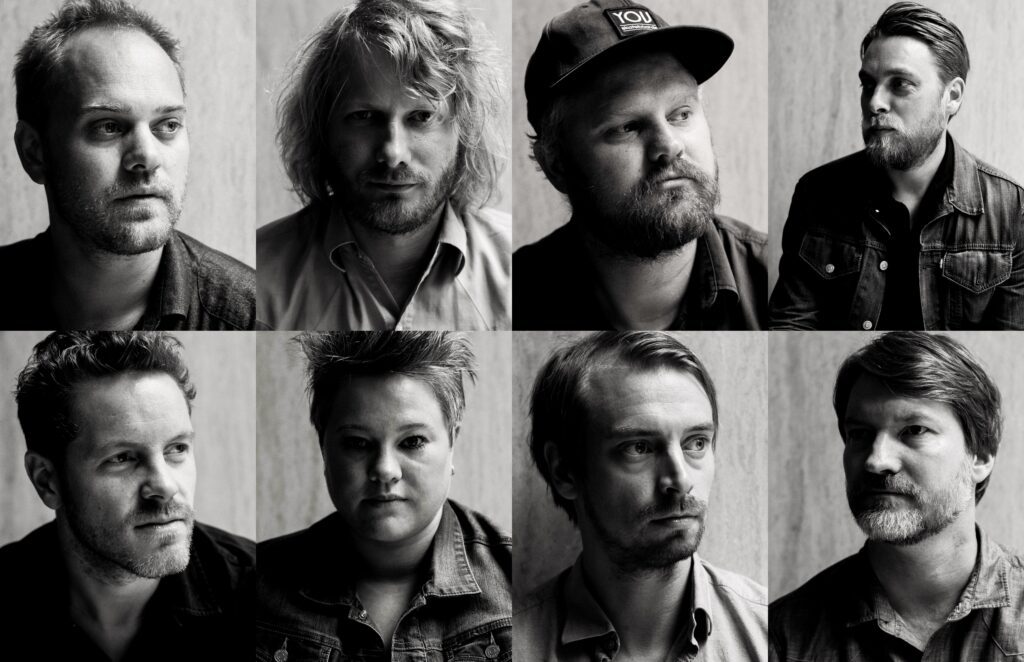 In 2003 I co-hosted a DJ set at the Big Chill Festival, as Jaga Jazzist set up on stage behind us. Two years later, Late Junctionrecorded Jaga’s appearance at the newly launched Wychwood Festival in Cheltenham. Their music had started to become part of my life.

Following the success of A Livingroom Hush came The Stix (2003) which proved that this powerhouse band also had the elegance of a Mozart quartet. Track ‘Kitty Wu’ showed off their sensitivity to gorgeous textures: the opening vibes, the interplay with bass clarinet, drums and electronics propelling it forward, a broadening soundscape with flutes and guitars, keyboards, the brilliant intercutting of motifs.

In 2004, Jaga fans were thrilled by the release of their early EP Magazine, from 1997/98, when the various members were still teenagers. “They were young seafarers, explorers of a thousand seas,” wrote Martin Revheim, one of the leading figures in the Norwegian music scene. “They gave us an unexpected sound to our lives. A sound then unknown, and a sound we were eager to embrace.”

2004 saw the band celebrate its tenth anniversary. Founded by brothers Martin and Lars Horntveth and their sister Line at home in Tønsberg, they drew friends in to the mix to have fun with music. “We just wanted to play in a band with many musicians playing many different styles on all the instruments we could possibly think of,” they told me when we met up in Oslo that year. “When we started, we liked to blend in all sorts of things, like hip-hop and African music. We were so young we didn’t care.”

That fun – international touring, recording, creating a stage performance that was visually thrilling and musically breath-taking – maintained Jaga’s profile as daring, adventurous and entertaining artists. Their huge palette of sound incorporated saxophone, clarinet, flute, trumpet, trombone, tuba, keyboards, vibes, electronics and a drummer in Martin Horntveth who fired up the crowds. It all provided constant inspiration for Lars as composer. Caught up in music that’s like time-lapse footage of criss-crossing urban traffic, the audience tightens its seat belt, bracing for the unexpected twists in the road. 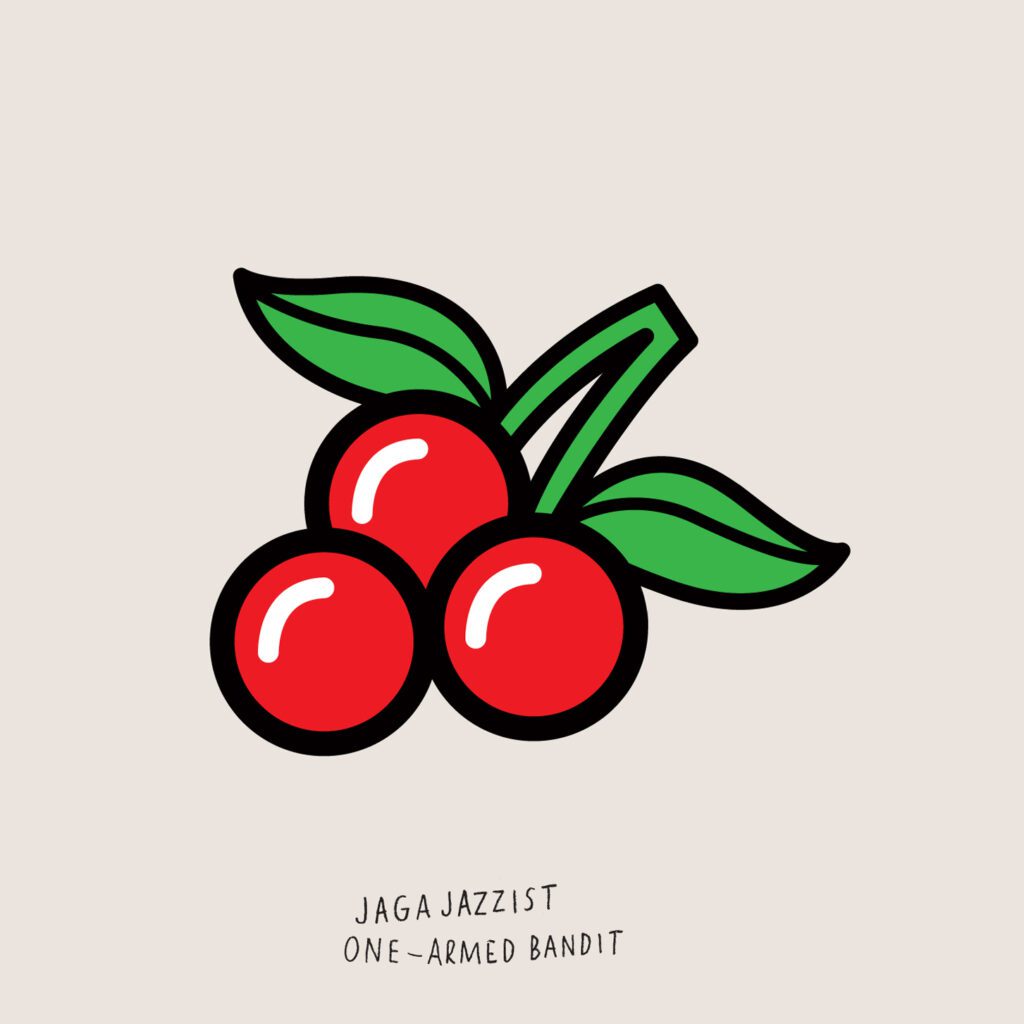 Each track in their album One-Armed Bandit, from 2010, is a strong and memorable composition, from the captivating invention of the title track, to the Philip Glass-like ‘Toccata’, and the cheeky ‘Prognissekongen’. All the band members have other musical lives as performers, producers and composers and by the time One-Armed Bandit was released Lars Horntveth aimed to bring his own experiences as a composer across several genres together with the talents of Jaga.

Not long after the album’s release, Lars asked me if I knew of an orchestra in the UK who might be interested in playing arrangements of Jaga material. I did: the Britten Sinfonia had been pushing the boundaries of concert programming ever since their foundation in 1992. They soon became known for being as brilliant with Franz Zappa as they were with Mozart. And so began a conversation that involved Jaga Jazzist, the Britten Sinfonia, the Barbican Centre in London and the Nasjonal Jazzscene and Ultima Festival in Oslo, with me acting as a cross between a go-between and curator. Eventually an agreement was reached, with members of the Sinfonia and the band shaking hands in a curry house in King’s Cross in London. 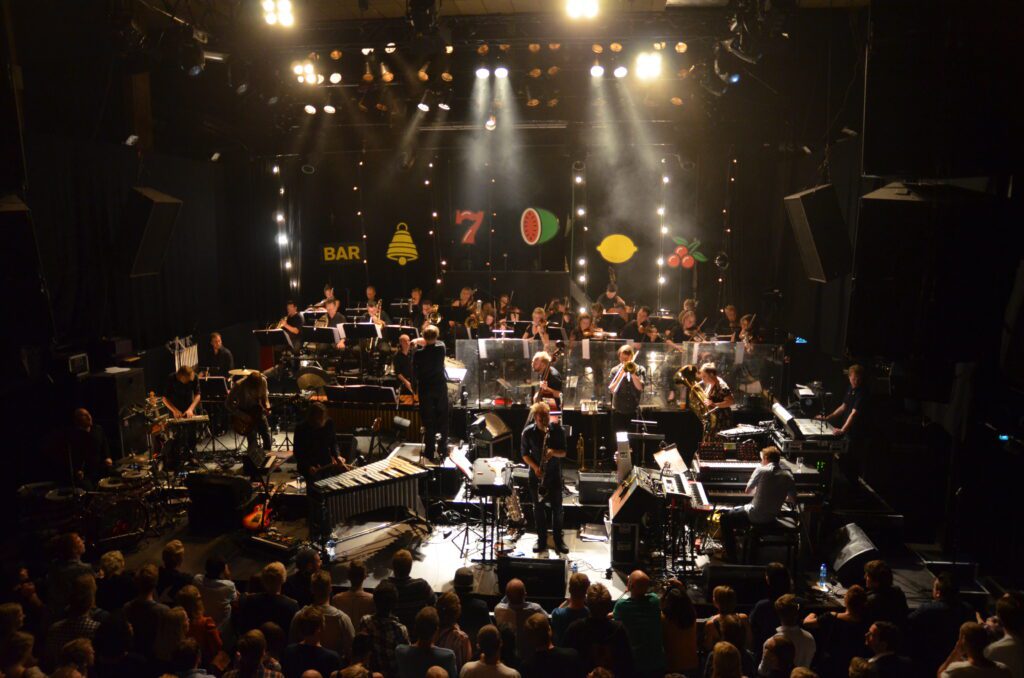 Lars set to work on the orchestrations. In June 2012, the full band and the orchestra met for the first time in London and, under the guidance of Norwegian conductor Christian Eggen, they began rehearsals with an air of disbelief that the event was finally happening. There was a moment at the concert in the Barbican when Lars went to the side of the stage and watched. He had the biggest smile that I have ever seen. The standing ovation was well deserved. A couple of months later they did it all again at Rockefeller in Oslo and the live album came out the following year, including an expansion of the title track from One Armed Bandit into a thrilling 15-minute piece. 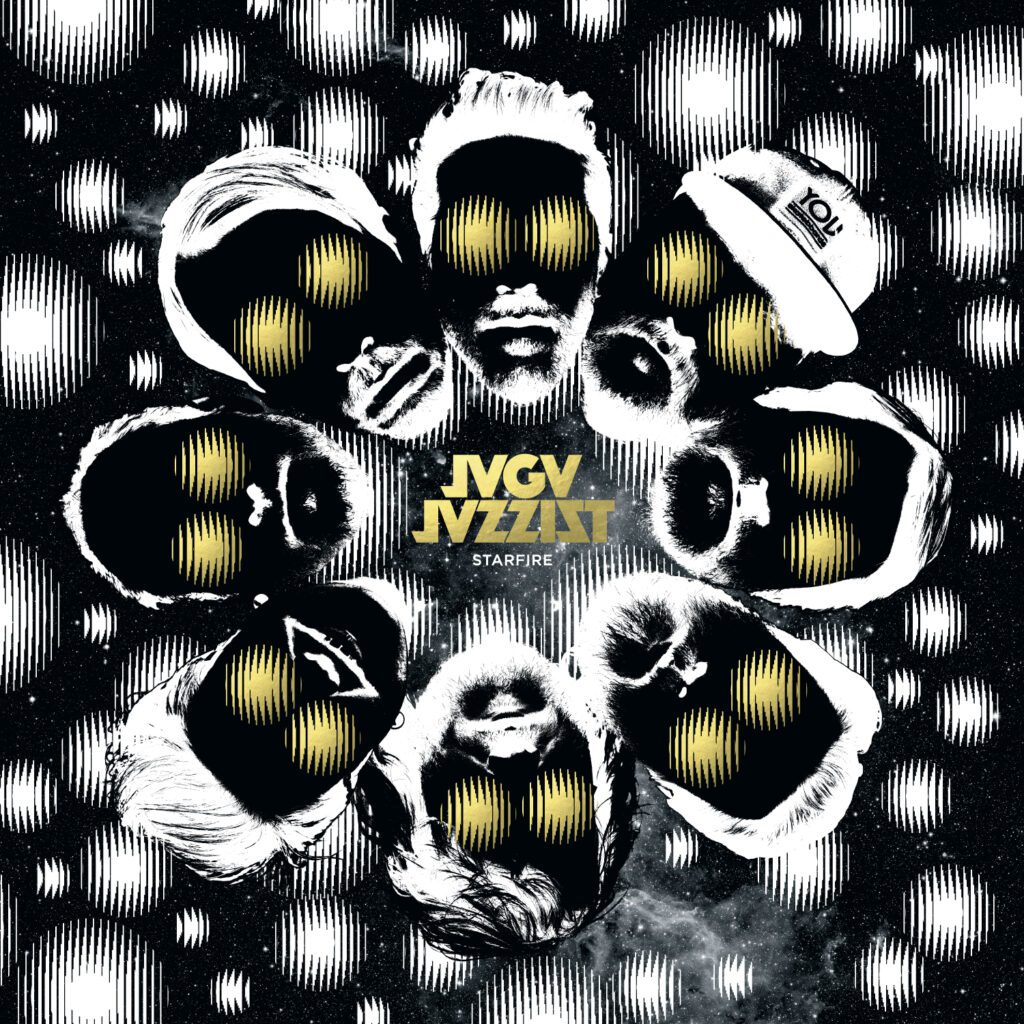 By the time Starfire arrived in 2015, Jaga Jazzist was 20 years old. There was a sophistication about the production, while retaining all the daring energy of their youth. The 25thanniversary in 2019 was celebrated at Parkteatret in Oslo over a weekend, reuniting past and present members of the band to play A Livingroom Hush for one concert, and new music for a second, along with two guest musicians, the legendary Norwegian keyboard players and composers Jon Balke and Ståle Storløkken. “I love playing with these two,” Lars told me from his home in Oslo during lockdown. “We grew up with their music, I have such a strong emotional link to it.”

But anniversary celebrations aside, there was another album to make. The one whose release has been impacted by the Covid-19 pandemic, whose release tour has been halted. Through all of this though Pyramid emerges as one of Jaga’s most powerful statements to date.

The recording happened quickly over two weeks last summer. The band returned to a place in Sweden that they hadn’t been to for over 20 years. Lars took along music he’d been working on and, confined indoors and the studio owing to a massive gnat attack, the band breathed life into the compositions, everyone working together producing and engineering. “Rehearse, record,” Lars recalls. “No one had heard the music before, but it worked well. Suddenly we had 40 minutes of music.” The four tracks of the album are like the four movements of a symphony. Lars concurs: “The four songs are very connected, so, maybe, a small symphony. Is that pretentious?” 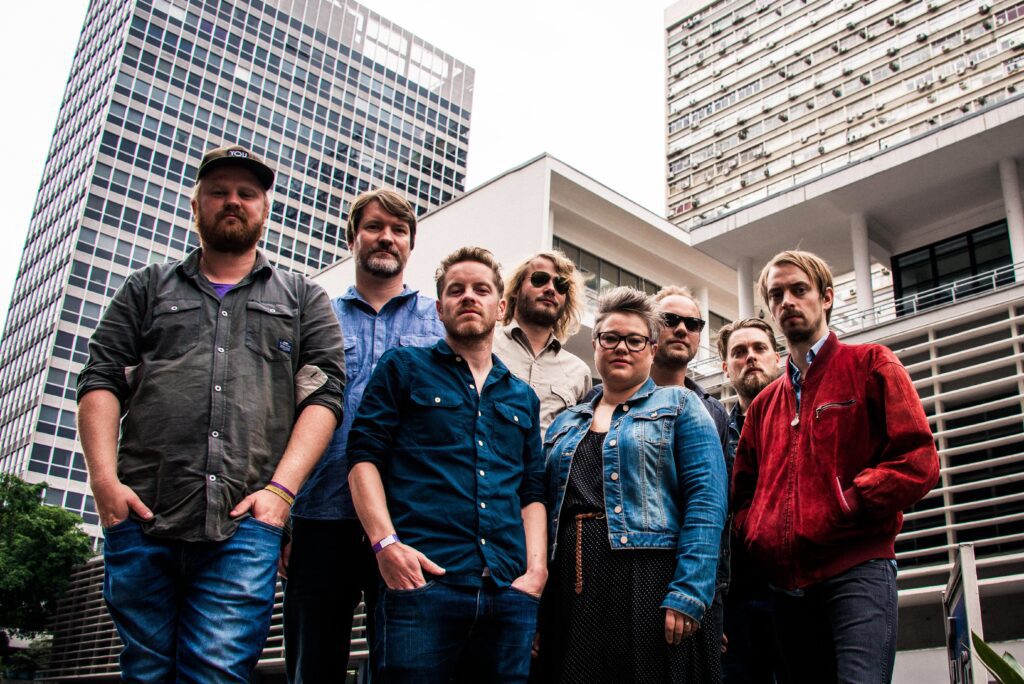 Experiencing Pyramid is like making a commitment to a Mahler symphony. There is a journey that you have to follow through, there’s a constant narrative flow. Lars relishes the album’s evolution and feels that he can no longer write short songs. But there’s still the spirit of early Jaga there: “A lot of the melodies are things I could have written when I was eleven, a lot of it is the same musical language.”

The first track, the first movement, ‘Tomita’, lifts off, majestically, like a plane tilting its wings as a farewell gesture to the runway; ‘Spiral Era’ is the scherzo, the high above the clouds playground; ‘The Shrine’ is a reminder that Jaga music is also a melting pot of so many influences and is, perhaps, a reference to Fela Kuti’s legendary Nigerian Afrobeat venue of that name; while the finale ‘The Apex’ is where Jaga past and future combine, an ending that arrives with a question mark. Whatever will happen next? Whatever it is, it will surprise and delight, and it will be the music we never knew we needed.

Pyramid by Jaga Jazzist is available on Brainfeeder

7 August 2020 / Fiona Talkington is a broadcaster, curator and writer, presenting for BBC Radio 3 for 30 years including 20 years as presenter of the award-winning show Late Junction. She’s been working with the Norwegian arts scene for 25 years. Categories