As jazz saxophonist Jan Garbarek prepares for performances in Cambridge and London, music journalist and broadcaster Fiona Talkington looks back over a 50-year career which has seen the veteran musician experiment with wind harps, eastern rhythms and Renaissance harmonies.

When Jan Garbarek walks on stage this month at the EFG London Jazz Festival and at the Cambridge International Jazz Festival, there’ll be those in the audience who’ve seen him perform countless times and probably own every note he’s ever recorded, and there’ll be others who have never heard him play before.

They will see a youthful looking 72-year-old carrying his instrument bag to centre stage. As he walks, he’ll look, almost shyly, towards the welcoming audience, and give a gentle smile. And then, with the other members of the Jan Garbarek Group (Rainer Brüninghaus on keyboards, Yuri Daniel on bass, and Trilok Gurtu on percussion) they’ll inhabit a musical world that goes beyond jazz, beyond continents.

In recent years we have mostly heard Garbarek with his own group or with his extraordinary 20-year best-selling project Officium, with the Hilliard Ensemble, but his lifetime of collaborations and musical explorations are numerous and breathtakingly wide-ranging. 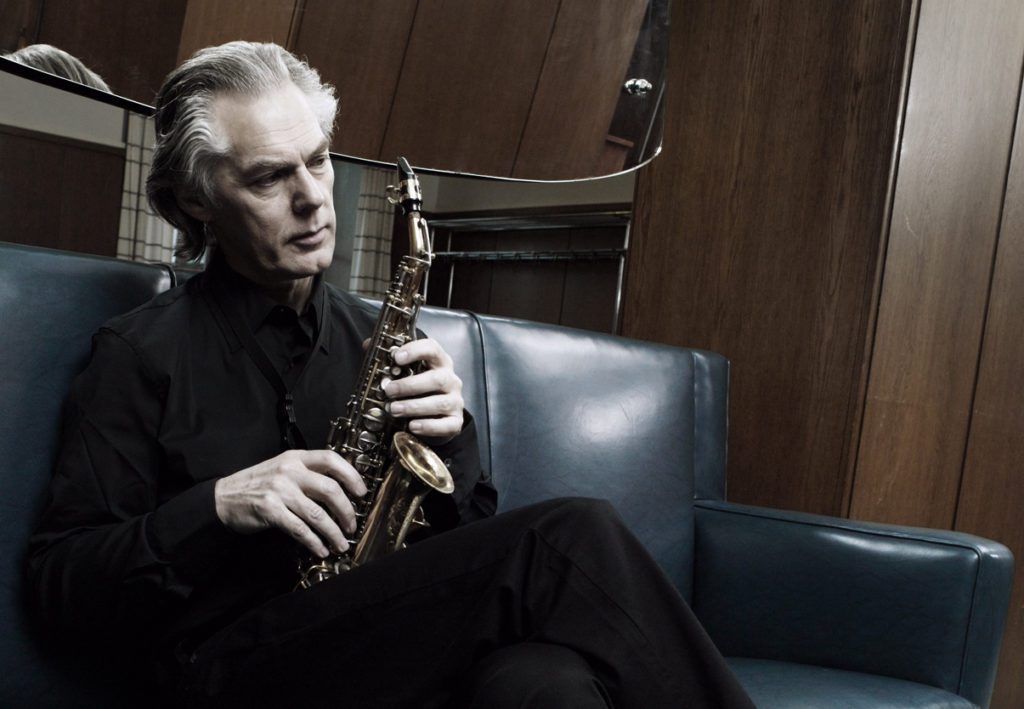 It was in his early teens that Garbarek first heard the music of John Coltrane, which stirred him to search for his own sound.  Later the American pianist, theorist and composer George Russell energised a melting pot of young Norwegian jazz musicians during the years he lived in Scandinavia, and Don Cherry nudged Garbarek with a few thoughts about using Norwegian folk music.

If all this felt a little behind closed doors, there came, in 1970, an international focus, a recording, Afric Pepperbird, which was to begin a relationship with one of the most influential record labels, ECM celebrating its 50th anniversary this year. This union was fuelled by the vision of its founder and producer Manfred Eicher and the close collaboration with the renowned sound engineer Jan Erik Kongshaug. * 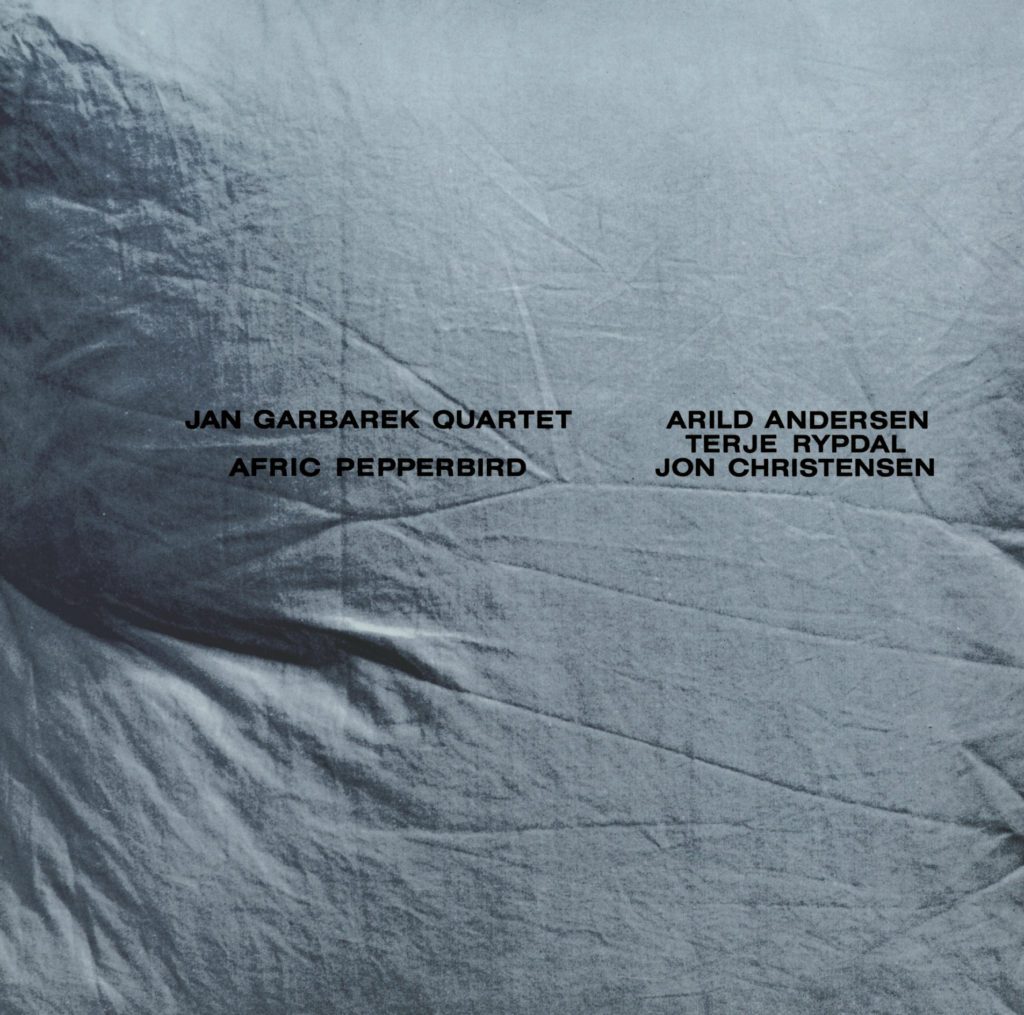 Before Afric Pepperbird Garbarek had appeared with other musicians on several records. Here, however, he was playing as part of a quartet, each of whom has since attained legendary status as artists who put Norway on the global music map: guitarist Terje Rypdal, bassist Arild Andersen and drummer Jon Christensen. The opening track ‘Skarabée’ feels as thrilling now as it must have been to listeners at the time with its unexpected palette of sounds:  sax, African thumb piano, drums, tinkling metallic percussion.

Over the course of 50 years, ECM has released some 1,600 recordings. Much respected by jazz aficionados, it gives a much wider context to musicians, blurring genres, always searching for new possibilities, nurturing new collaborations. Its ‘New Series’ releases include Thomas Tallis, Schubert, Arvo Pärt, Giya Kancheli, Dobrinka Tabakova and Bach. It is a label where one of the greatest jazz pianists, Keith Jarrett, is found playing Handel. It has created vast cathedrals of sound where anything can happen. Its role in music history is significant, and not least for its part in drawing attention to the European, and especially Norwegian, jazz.

It is in this context that Garbarek’s career unfolded. The hidden world of the scarab beetle gave voice to the opening of Afric Pepperbird. The albums which followed incorporated wind harps, medieval ballads, Indian ragas, hymns and lullabies. 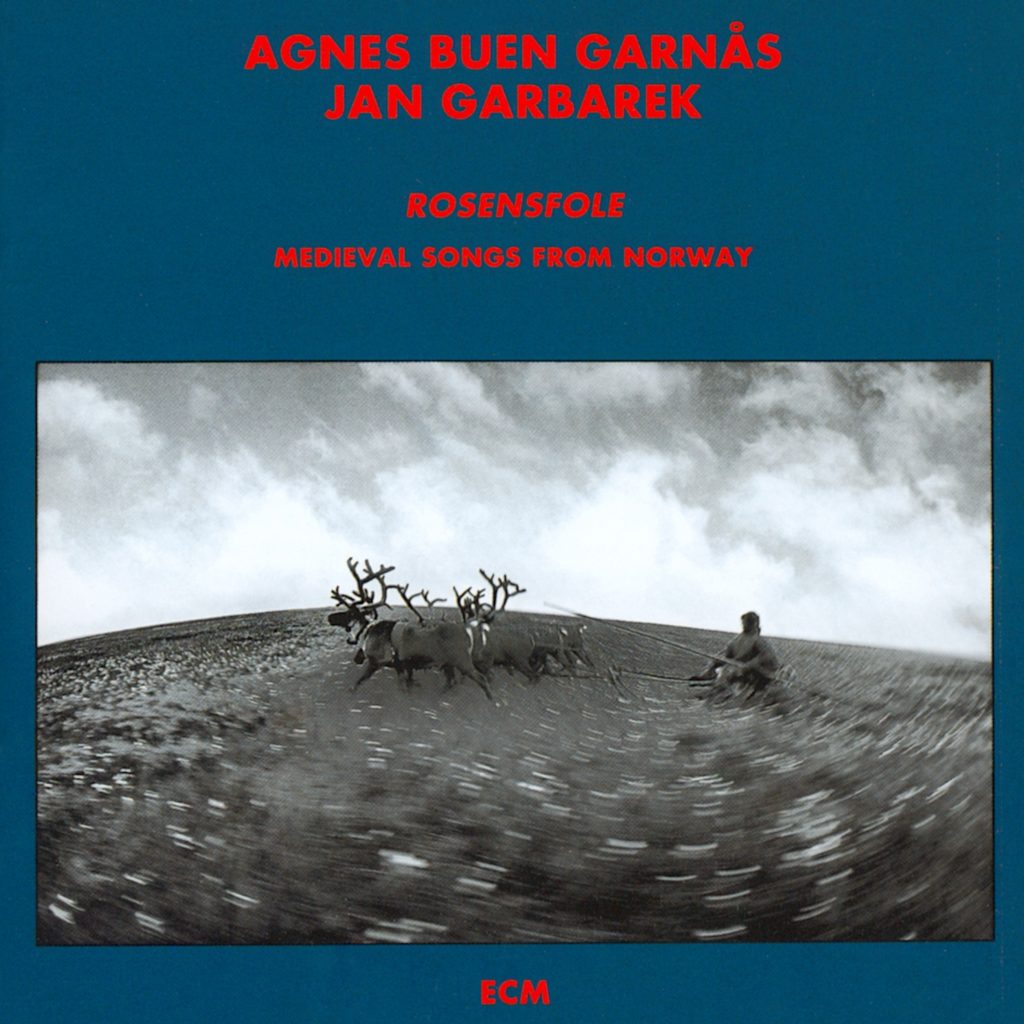 To really understand Garbarek on stage, one needs to listen to some of his earlier ECM recordings. Rosensfole (1998) is often overlooked. Joining Garbarek was one of Norway’s most renowned folk singers Agnes Buen Garnås who asked Garbarek to arrange an album for her. Her chosen tunes, the traditional cattle calls, and the ancient ballads fired his imagination, bringing to mind connections between old Norwegian melodies and music from other parts of the world, including eastern scales and rhythms and calls to prayer.

An early album, Dis (1977), explored yet another collaboration, not just with the brilliant guitarist Ralph Towner but with a wind harp – also known as an Aeolian harp – on the coast of Southern Norway, recorded by Jan Erik Kongshaug. The tones and overtones of the wind rolling in off the North Sea were the inspiration, an exquisite example of Garbarek’s own distinctive saxophone sound that so many people describe as singing. 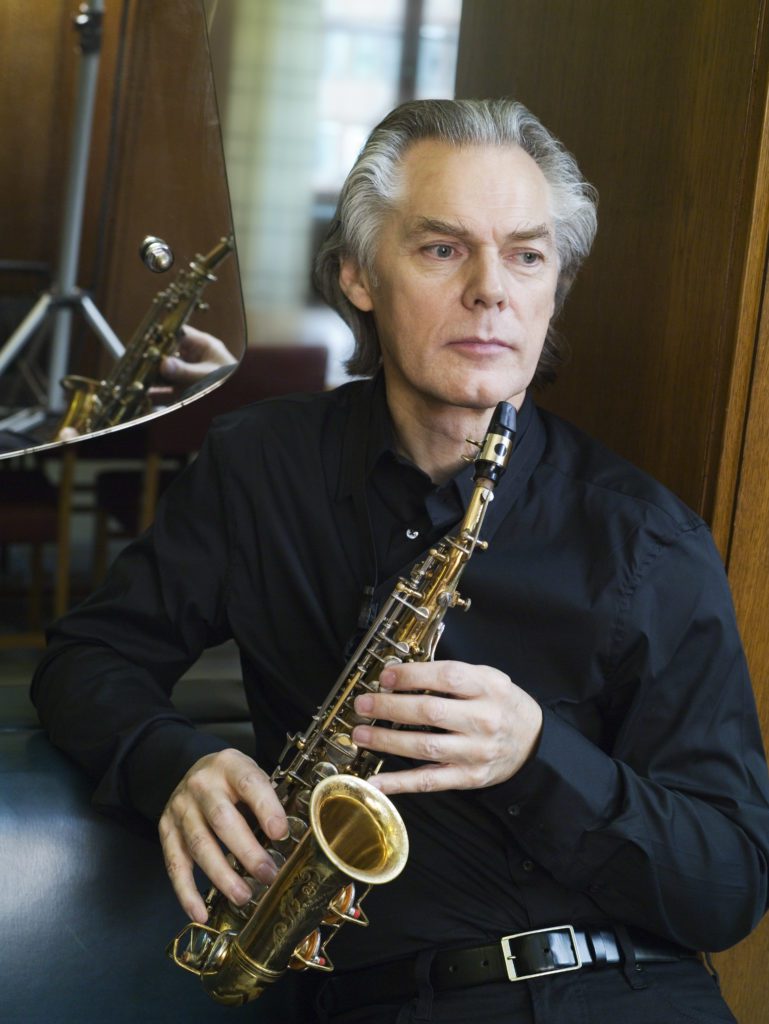 For any newcomer to Garbarek’s music his own selection, for the ECM’s ‘:rarum’ compilation, reveals a great deal about this musician. But, in Garbarek’s own words, it is also a tribute to the many musicians he has worked with: “I feel I could write a book about the virtues of each of the musicians I’ve been so fortunate to encounter throughout these years and my gratitude is endless for their generous input on so many levels”.

Perhaps most touching of all are his words about pianist Keith Jarrett, who he first heard play in Stockholm in 1966. ‘My Song’ (1977) with Jarrett, Jon Christensen (drums) and Palle Danielsson on bass, features in the compilation, alongside other collaborations: the infectious energy of a partnership with violinist L. Shankar and percussionists Zakir Hussain and Trilok Gurtu on Song for Everyone (1984); with church organist Kjell Johnsen on the disturbingly beautiful ‘Iskirken’ (1979); and folk meets South America in Eventyr, (1980) which includes Nana Vasconcelos’s seductive percussion and John Abercombie’s mischievous guitars.

In 1990 Garbarek released I took up the Runes, which featured Sami traditions in an arrangement of music by singer Mari Boine and also the voice of Ingor Ántte Áilu Gaup. The Sami influence continued into Twelve Moons (1993) including brilliant percussion from Manu Katché and Marilyn Mazur – and a magical arrangement of music by Grieg.

Garbarek once explained to me that it did not matter if you lived in the same apartment block as a great musician: if there was no chemistry, then you wouldn’t make great music. Sometimes it was necessary to cross continents. For the beautiful Ragas and Sagas (1992) and Madar (1994) he played alongside tabla player Ustad Shaukat Hussain and vocalist Ustad Fateh Ali Khan. On Madar, he also collaborated with the Tunisian oud player Anouar Brahem for a timeless Norwegian lullaby ‘Sull Lull’, delivering a full-throttle sax improvisation.

By this point Garbarek had been introduced to the musicians who were to become perhaps his most distinctive and, in the early days, most unlikely collaborators: The Hilliard Ensemble, English choral singers, experts in music of medieval and Renaissance eras, as well as passionate commissioners of new music. 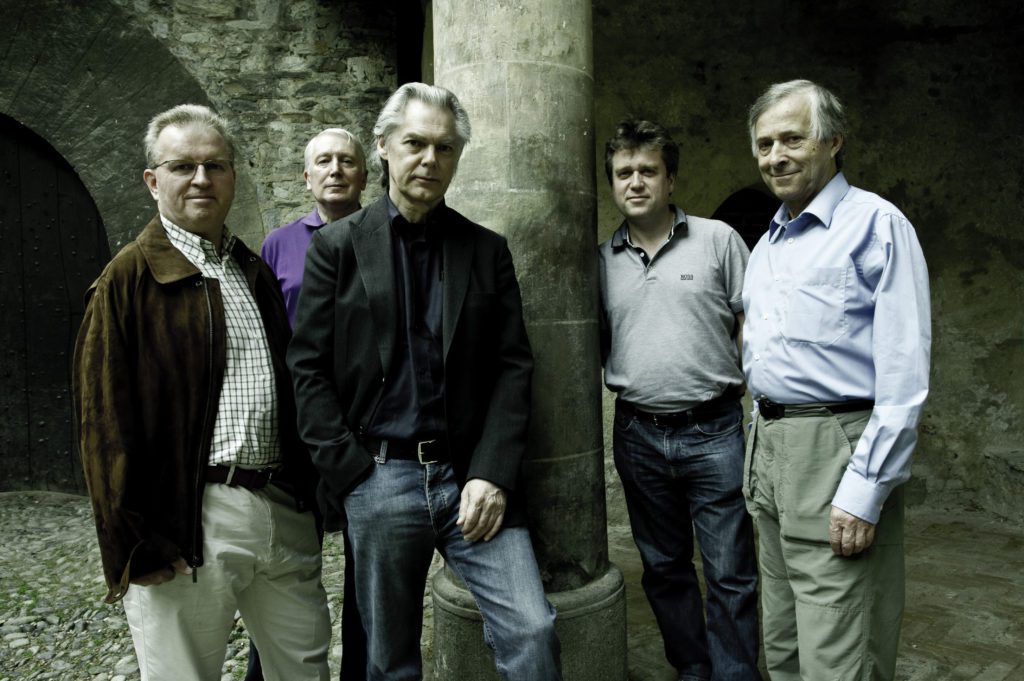 While filming in Iceland in 1990 ECM’s Manfred Eicher had the idea to bring them together with Garbarek. He remembered hearing music by the 16th-century Spanish composer Morales in Seville Cathedral some years earlier and imagined Garbarek improvising above the voices.

It is this vision which brought about the Officium project, which for 20 years gave the Hilliard Ensemble and Garbarek a huge worldwide touring schedule, and three bestselling albums: Officium (1994), Menmosyne (1999) and Officium Novum (2010). In 2014 as the Hilliard Ensemble retired, they gave a series of farewell concerts, recordings that now emerge in the new release Remember me my dear. 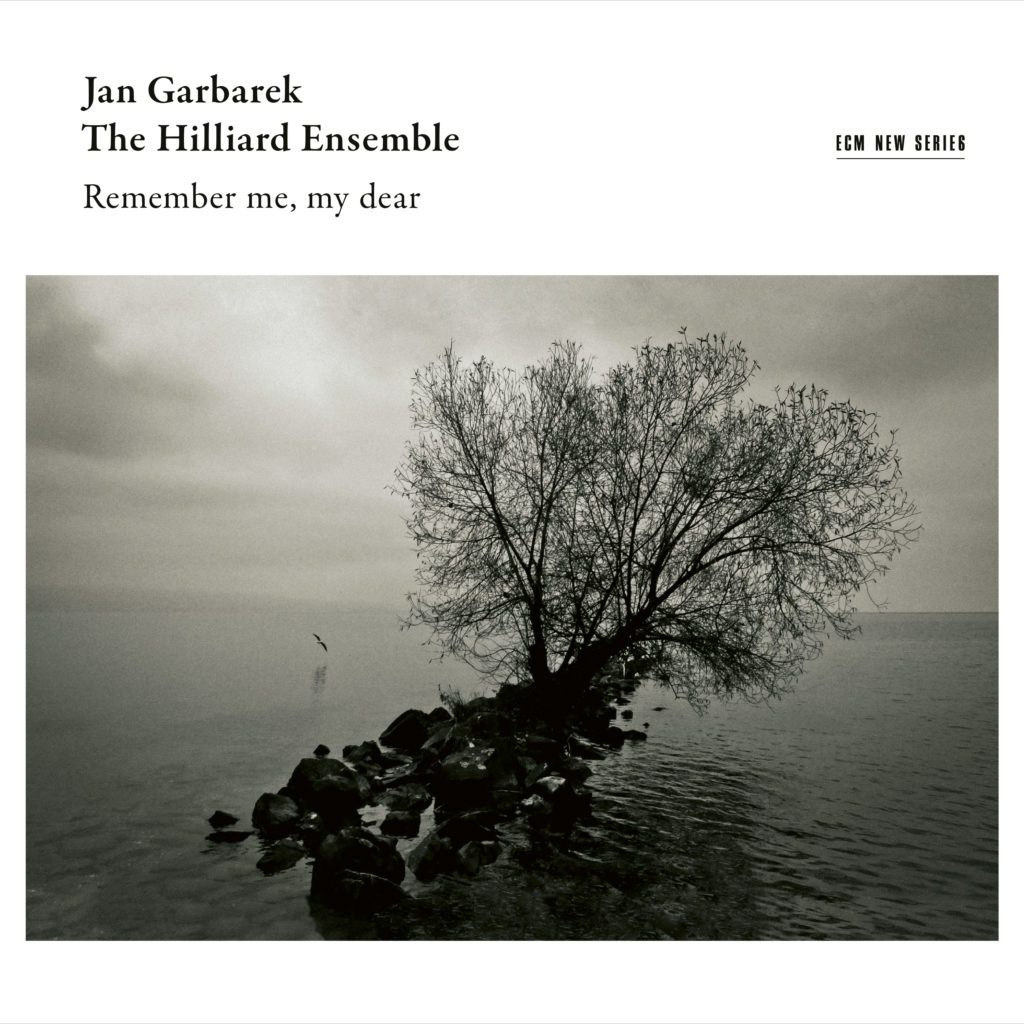 Jan Garbarek / The Hilliard Ensemble, Remember me, my dear (ECM)

Counter-tenor David James told the story of their first meeting in a monastery in the Austrian Alps. The Hilliards took a pile of music with them and began with Morales’ ‘Parce mihi Domine’. “Suddenly,” James recalled, “we were aware that there was something else going on. And as I’m telling you now, I can still feel in my body that moment. Quite unawares, behind us, Jan had started joining in with us. Then Manfred got up and said: ‘We have to record this as soon as possible.’ And the other guys, I can tell you, there were tears in all their eyes. And that’s how it started.”

Garbarek was now the ‘fifth voice’. Together, over the years, they explored the medieval and Renaissance repertoire, as well as newly researched fragments and manuscripts, new music from South America, from Estonia, Armenia, 13th century France, Russian liturgy. They performed in cathedrals, amphitheatres, churches, concert halls, and explored the physicality of these spaces. Walking around while performing they found a freedom, new ideas, new possibilities, as Garbarek’s reactions to their voices soared and swooped around ancient stonework and high vaulted ceilings. 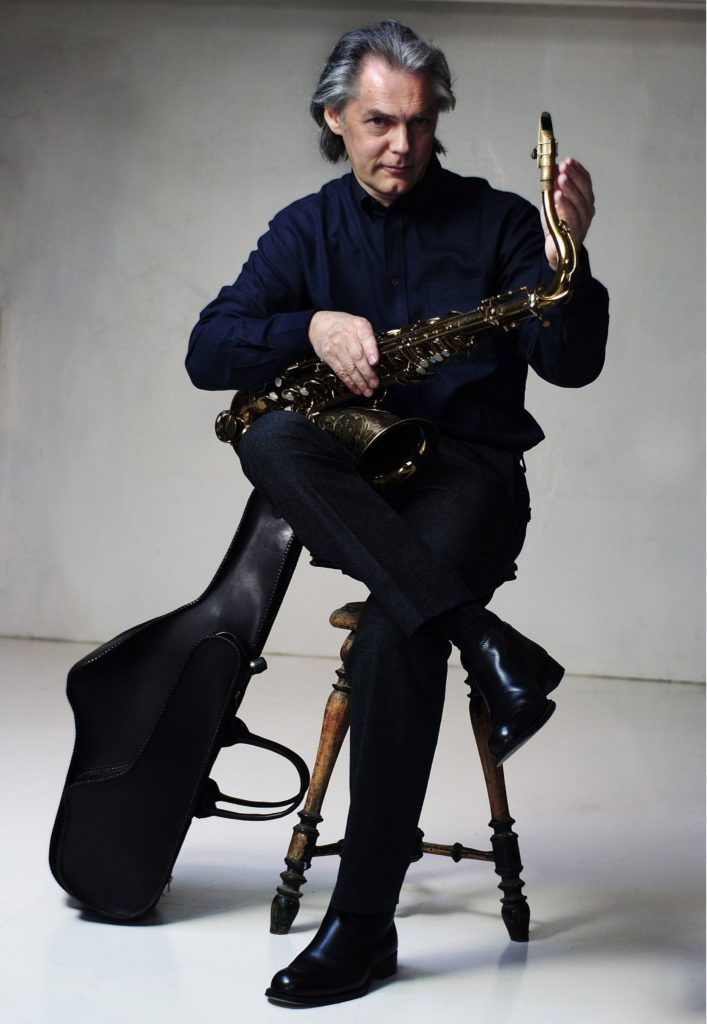 This new release is a tribute to the work and vision of Manfred Eicher and ECM in its 50th year. Recorded in the Church of the Collegiata dei Santi Pietro e Stefano in the Swiss town of Bellinzona, it takes listeners inside that vast space, filled with Garbarek’s haunting notes, his fierce interjections in a Hymn by the Armenian priest and composer Komitas. Glorious prayers and litanies follow, witty moments of dance, two of Garbarek’s own poetry-inspired compositions, and, finally, an anonymous but now familiar 16th-century Scottish song ‘Remember Me My Dear’, the title track. Never has it sounded so poignant.

On stage at a jazz festival, Garbarek’s ‘voice’ remains the same. His unique sound comes from a lifetime of belief in music, of listening deeply to others, and drawing on the wonder and determination of musicians to create something that is inescapably life-changing.

The Jan Garbarek Group will be performing at:

Remember Me, My Dear by Jan Garbarek and The Hilliard Ensemble is available now from ECM Records

* Sadly, as we were going to press news came through of the death of Jan Erik Kongshaug on 6 November. He had contributed so much to the work of so many musicians, including a long creative collaboration with Jan Garbarek.

7 November 2019 / Fiona Talkington is a broadcaster, curator and writer, presenting for BBC Radio 3 for 30 years including 20 years as presenter of the award-winning show Late Junction. She’s been working with the Norwegian arts scene for 25 years. Categories