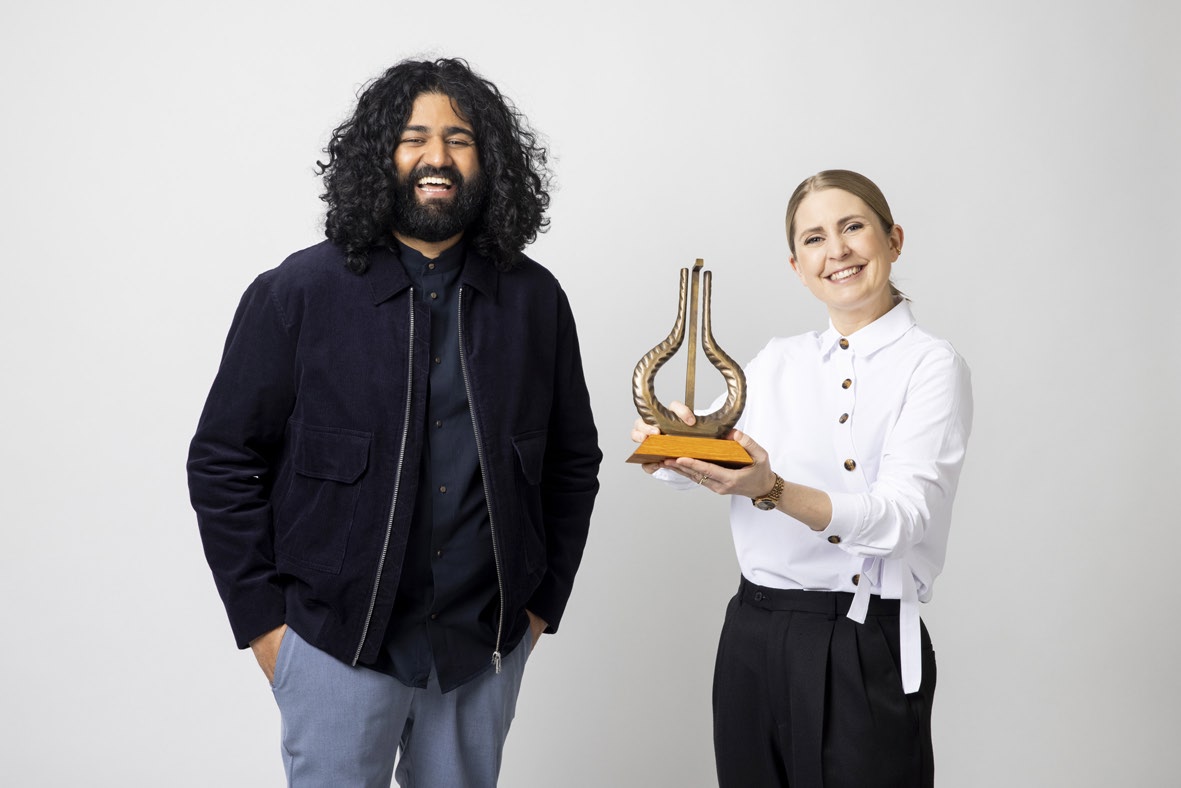 On the eve of the Spellemannprisen, Dan Cromb examines Norway’s premier music award ceremony, discovering an array of unusual categories, hopeful contenders and big winners – and yes, A-ha have won their share.

As the largest, most prestigious, award ceremony in the Norwegian music industry’s calendar, the Spellemannprisen awards are fiercely anticipated. And that is particularly true for this year’s ceremony on 16 April, as Norway comes together to celebrate some of its most impressive and diverse musical talent following a challenging year for the music industry.

Established in 1973 by the International Federation of the Phonographic Industry, Spellemannprisen acknowledges those artists who’ve made a significant contribution to Norwegian music during the previous year, rewarding figures who’ve stood out in their respective genres. It also aims to “strengthen unity in the music environment”. Widely considered as a Norwegian equivalent to the American Grammy awards (or the UK’s Brit Awards), the prizes themselves, which take the shape of a harp, are highly coveted within the industry.

In its first year, just ten Spellemann prizes were awarded. Since then, there have been 2,853 nominations, resulting in 821 awards shared between over 500 different artists or collaboratives. There are now 23 categories. Topping the list of winners in the awards history is the classical pianist Leif Ove Andsnes, who has received a total of ten prizes. Following closely behind are the dansband Ole Ivars and synth-pop sensation A-ha, with eight apiece, and electronic duo Röyksopp and the funk pairing of Madcon, both amassing six wins each. It also feels appropriate to mention arguably the unluckiest nominee to date, indie artist Erlend Ropstad, who has had seven nominations and no wins. The number of categories continues to grow each year, with the original ten in 1972 rising to 23 this year, with Hip Hop and R&B/Soul categories introduced for the first time.

In a year where large-scale musical events have been notably absent, even getting together to write and record has required re-imagining normal practices. Musicians, artists and producers have developed innovative techniques to keep their creativity flowing, with virtual spaces often taking the place of real ones. Spellemannprisen is no exception, with the list of this years’ nominees having recently been announced in an online press conference.

The virtual ceremony itself is set to be broadcast on NRK 1, co-hosted by journalist Silje Nordnes, DJ Sandeep Singh and rock drummer Tarjei Ström. Join us on a tour of the nominees across some of the key categories featuring head of this year’s ceremony Friday 16 April.

This category is always closely watched and this year the competition is hotter than ever. The nominations are for Arve Tellefsen and Kaare Ørnung’s compilation Haijn Kaare Ørnung å Æ, cellist Sandra Lied Haga for her self-titled album, conductor Edward Gardner (with the Bergen Philharmonic Orchestra) for their interpretation of the Benjamin Britten opera Peter Grimesand violinist Eldbjørg Hemsing’s recording of Grieg’s Violin Sonatas (alongside Macedonian pianist Simon Trpčeski).

The strongest contenders are Gardner – critics described his Peter Grimes as “shattering” and “spellbinding”, and Hemsing, who will hope to improve on last year’s result which saw her nominated in the same category (with the eventual prize going to the Oslo Philharmonic Orchestra for Mahler’s Symphony No. 3).

A category which needs no translation, and for which there are four albums in the running. This year sees Annie nominated for Dark Hearts, an introverted-yet-cinematic offering that is her first record in over a decade, and one that also sees the Bergen based singer nominated in the ‘Songwriter of the Year’ category. Emilie Nicolas, already the holder of four Spellemannpris awards, receives a nomination for her deeply personal album Let Her Breathe.

The relative newcomer SKAAR (Hilde Skaar, a singer/songwriter from the island of Stord) picks up one of her two Spellemannpris nominations this year for her debut album The Other Side of Waiting. And veteran songwriter Sondre Lerche is the only male nominee in the Pop category with Patience, an album that’s been described as “a critically acclaimed collection of essays” and has also received nominations in the Årets Tekstforfatter (Lyricist of the Year) and ‘Årets Låtskriver’ (Songwriter of the Year) categories.

Årets låt (Song of the Year)

Is this the year that Dagny, the Tromsø-born singer who has progressed from pop princess to fully-fledged queen, finally takes home the coveted ‘Song of the Year’ trophy? With nominations in the same category in 2016 for Backbeat, 2017 for Wearing Nothingand 2018 for Drink About (with Seeb), it feels long overdue. Given that Somebody – this year’s contender – picked up the NRK P3 Gold ‘Song of the year’ award at the end of 2020, it bodes well, but the competition is fierce.

Frida Ånnevik and Chris Holsten have been nominated for their Norwegian language version of Hvis verden (If the World), a gorgeous duet which has been wildly popular in Norway this year. And the artist who’ll be representing Norway at this year’s Eurovision Song Contest in Rotterdam, TIX, doubles his chances of a win with nominations for two separate songs Kaller På Degand Karentene. Elsewhere, the contenders are team efforts, with Alan Walker & Ava Max’s club-friendly Along pt. II, CLMD & Tungevaag’s globally-popular DANCE, Julie Bergan & Seeb’s catchy Kiss Somebody and Kygo and OneRepublic’s collaboration Lose Somebody all also in the running.

This is a category that draws the focus of the wider musical community. This year’s nominees include Girl in Red and Boy Pablo, both of whom have established a dedicated international following and are highly sought after for festival appearances. They also both stand a chance of taking home the ‘Music Video of the Year’ award, for Rue and Hey Girl respectively.

Elsewhere, nominees Caroline Ailin and Payday both found themselves in the mix at the American Grammy awards this year, with Ailin contributing to Dua Lipa’s track Don’t Start Now, and Payday recognised for his role on Bad Bunny’s album YHLQMDLG.

Other categories that draw interest include Åpen Klasse (Open Class), often a seen as a showcase for some of the more innovative and experimental homegrown talent, with this year being no exception. The nominated artist/albums are: Hedvig Mollestad for Ekhidna, Jaga Jazzist for Pyramid, Mimmi for Semper Eadem, and Stian Westerhus for Redundance. Similarly, the jazz scene in Norway has been enjoying a resurgence over the last few years and it’s going to be hard to tease apart a winner from the four nominees in the Jazz category: Gard Nilssen’s Supersonic Orchestra, Harald Lassen, the Maria Kannegaard Trio and Møster!.

In the more mainstream categories, it’s not unusual for artists who write and perform almost exclusively in Norwegian to be somewhat overlooked, given their lack of commercial appeal abroad. This year, however, sees a slight reversal of that trend, with several such artists picking up nominations. Notably, Norwegian-Portugese rapper Cezinando’s fourth studio album Et godt stup i et grunt vann (A Good Plunge into a Shallow Water) received nominations in both the Lyricist of the Year and Songwriter of the Year categories. Fierce punk-rock band Daufødt are recognised for their album 1000 island, nominated in the Rock category, but find themselves up against Undergrünnen, nominated thanks to their “hard-hitting and absurd Norwegian lyrics” on sophomore album Ein revnande likegyldighet (A tearing indifference).

Even the children are getting in on the act, with Hei Kalas, Huldra Hildur and Sarah Camille all picking up deserved nominations in the Barnemusikk (Children’s Music) category for a range of delightful and uplifting songs, all sung in Norwegian.

Next year the prize will celebrate its 50th anniversary, which is likely to be a memorable event. And so, it’s worth finishing on the nominees in this year’s Årets Gjennombrudd (Breakthrough of the Year) category; history shows that these artists are likely to feature heavily at future Spellemannprisen awards. Recent winners in this category include Boy Pablo, Sigrid, Astrid S and Aurora, all of whom have gone on to have successful careers, both at home and abroad, with Boy Pablo and previous nominee Girl in Red both also in the running for this year’s ‘Internasjonale Suksess’ (International Success) award.

In the running this year are BØLGEN, one of the most streamed artists in Norway last year, Norwegian-Somali rapper Musti, the elusive dance artist Ringnes-Ronny, 21-year-old S1sco, rising star of the hip-hop scene Sebastian Zalo, and SKAAR, who is also a Pop category contender. Even securing a nomination in the ‘Breakthrough’ category provides a platform fromwhich to launch your career, so the music industry will be paying close attention.

Details of every nominee across the 23 categories, with background information on all of the artists, can be found on the Spellemannprisen website. Regardless of who wins on 16 April, the strength and depth of this year’s line-up proves that the Norwegian music industry remains strong, even in the face of the adversity.

8 April / Dan Cromb is a freelance journalist and photographer who enjoys all things Nordic. When he's not also writing for Ja Ja Ja Music, he can be found on the ward looking after small humans. Categories