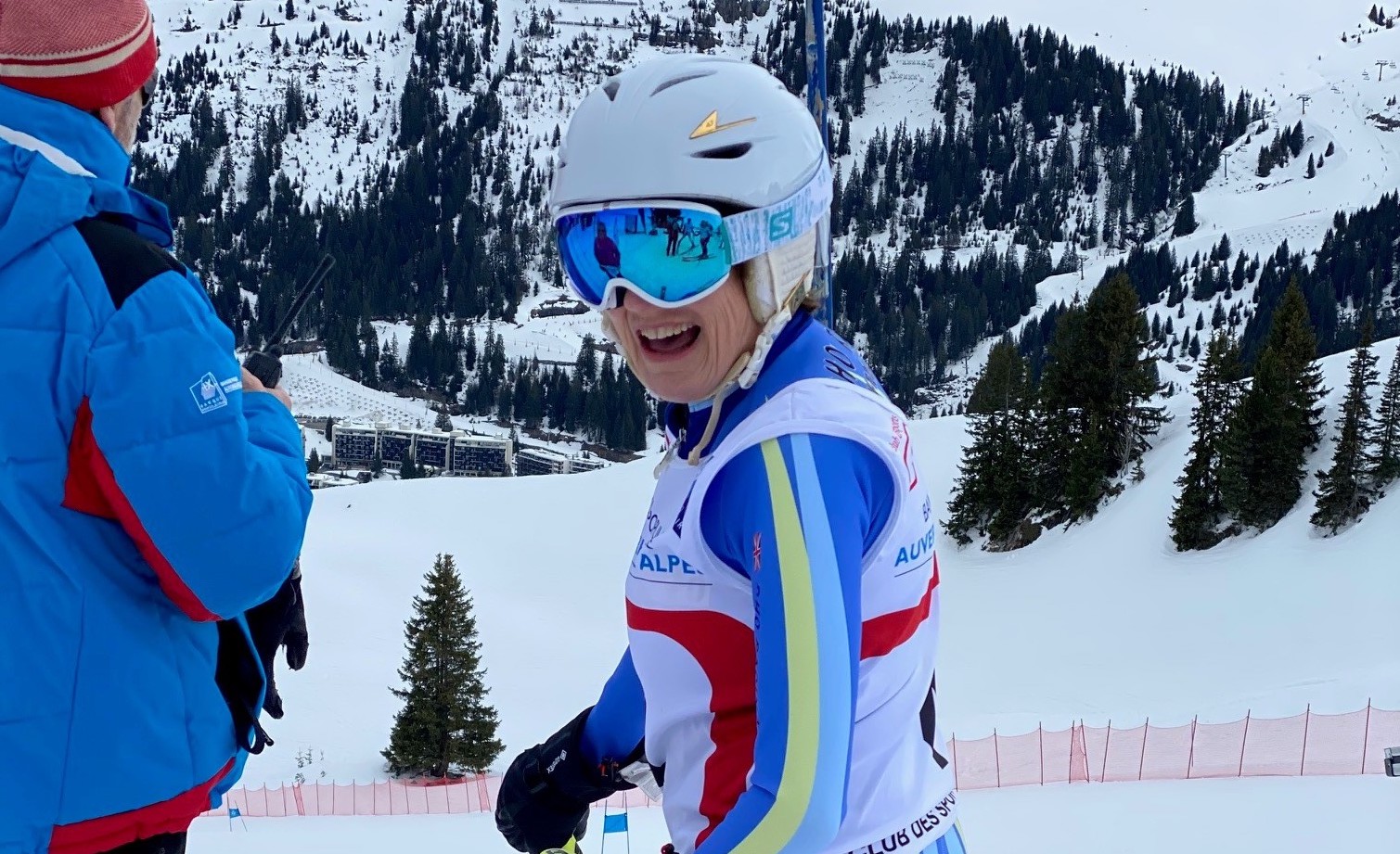 Exploration, espionage, first love and Norwegian knitwear. These and other emotive elements feature in ‘To Heaven’s Heights’, Ingrid Christophersen’s thrilling new anthology of skiing in literature.

Christophersen is perfectly placed to survey the subject: raised in Norway during the post-war years – Christophersen’s father was Norwegian, her mother Australian – she was skiing at an early age. Subsequently, she was a member of the British Women’s Alpine Ski Team, managed the British childrens’ team and was awarded an MBE for services to skiing in 2007. She is also familiar with the literary landscape, having translated several books from Norwegian into English, including Åsne Seierstad’s The Bookseller of Kabul and Tor Bomann-Larsen’s biography of Roald Amundsen. 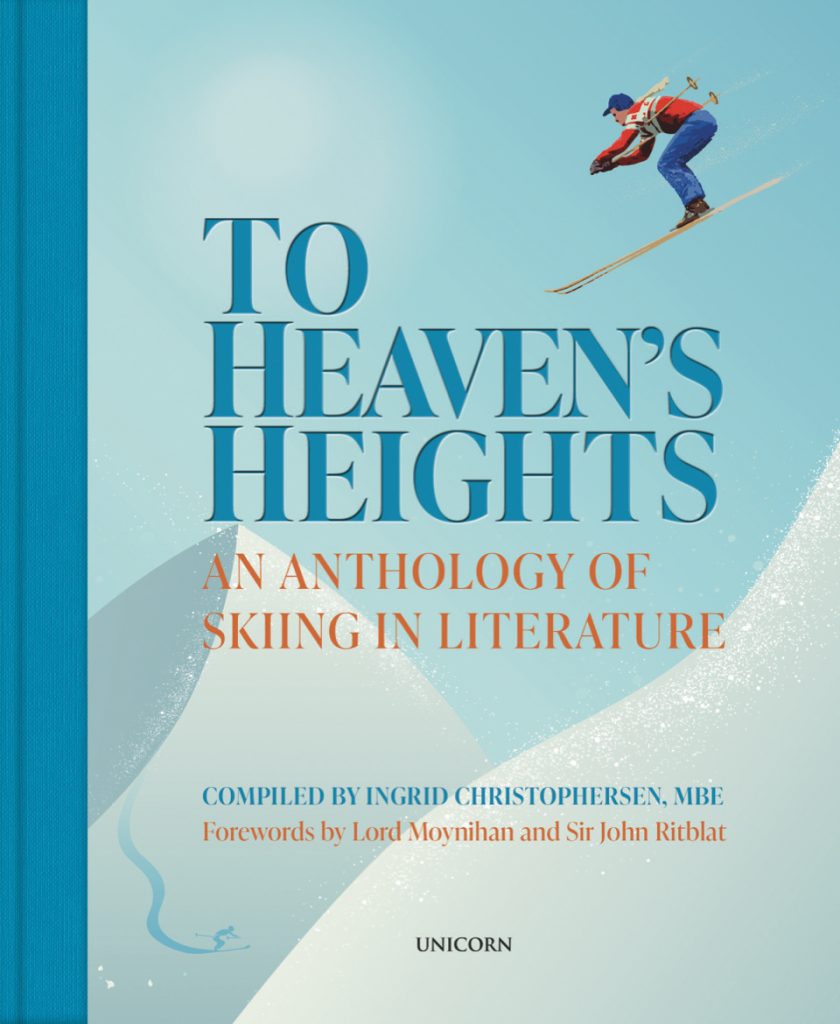 The pages of To Heaven’s Heights bring together fiction, travel writing, memoir and journalism, with both amusing and pulse-propelling results. We find skiing as sport, transport and cultural activity, as pure joy and abject terror. There are classic Norwegian authors – Knut Hamsun, and Sigrid Undset – and more recent figures, such as Karl Ove Knausgaard and Lars Saabye Christensen, alongside international writers, including Ernest Hemingway, Ian Fleming, Honoré de Balzac and Sylvia Plath. The result is a great slalom run of a read. As her charming book is published in the run up to Christmas, Christophersen explains why skiing is the perfect activity for a clever reader.

Why do you call Norway the “Cradle of Skiing”at the beginning of To Heaven’s Heights?

Well, there are skis that have been found on rock carvings in northern Norway. We know that the Lapps hunted on skis many thousands of years ago. And when Fridtjof Nansen crossed Greenland on skis in 1888, I think that kick-started skiing as a leisure activity. So, I think skiing in mass production, shall we say, began in Norway.

Do Norwegians learn to ski around the time that they learn to read and write?

Oh no, much before. As I say in the beginning of the book, I was born with skis on and the midwife had a saw. Maybe not so much now because people live in towns, but in the countryside in the old times you skied right from the beginning. I had skis on when I was 18-months old and skied properly when I was three. I skied to school every day. 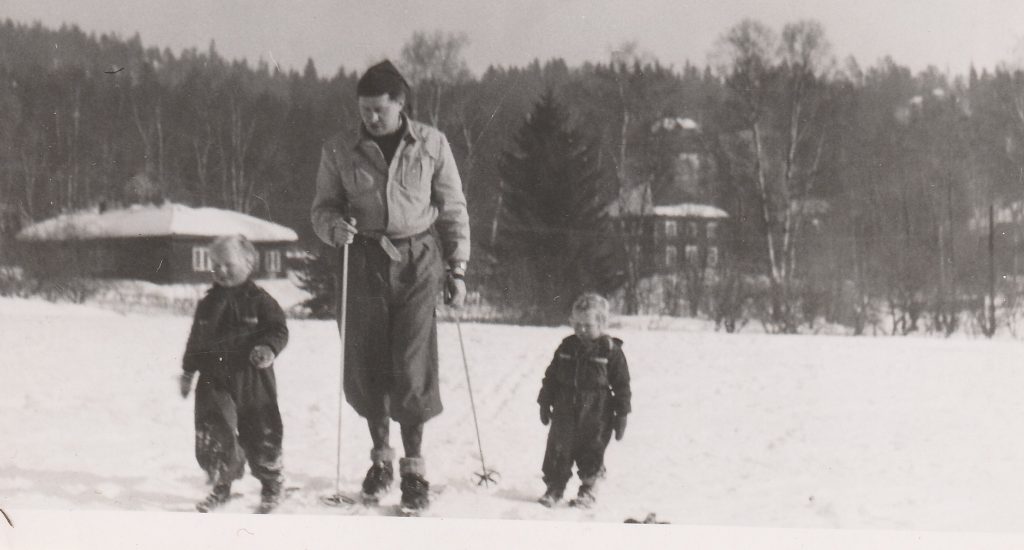 “I was born with skis on”: Ingrid Christophersen aged 3 (right), with her father and brother in Norway, 1947

What inspired you to compile this book?

Well, I went to school and university in Norway and when I was at my 50th anniversary celebrations for my high school there was a Norwegian anthology at the party. It was much smaller than mine. And I thought, ‘Oh, I can do better than that.’ And so, I started and it was terribly interesting finding things. The difficulty and sometimes unpleasantness came when I wanted copyright. All the Norwegians gave me their pieces for nothing, in fact one Norwegian said ‘How much do I owe you?’

What surprised you as you researched the subject?

Two things: how little there was and how much there was. The Germans only came up with Thomas Mann and the Russians didn’t come up with anything at all. Someone like Tolstoy, who lived in the country and had a big farm, didn’t write about skiing. And yet you have Hemingway with four or five books where he mentions skiing. And then there are so many Norwegian anecdotes and vignettes but I can’t really translate them all – some of them are too Norwegian. 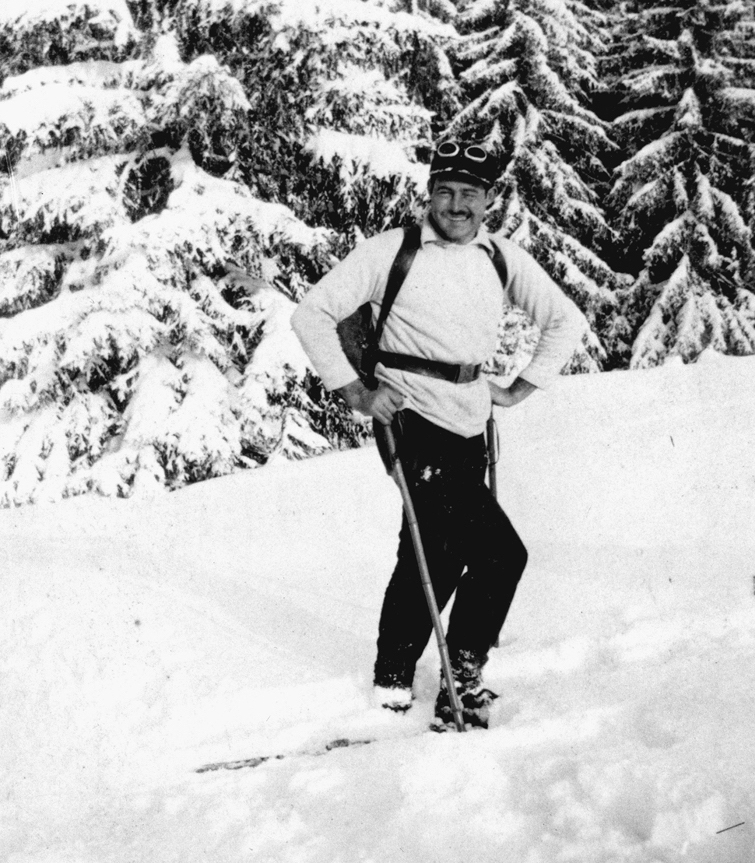 “And yet you have Hemingway with four or five books where he mentions skiing”. Hemingway in Gstaad, 1927 (John F. Kennedy Presidential Library)

There is a strong vein of humour running through the book. What is the funniest thing you have read about skiing?

I think that Garrison Keillor’s story is really funny. This boy falls in love with this girl and they go skiing. He’s never skied in his life but he says ‘Oh yes!’ he knows all about it. He falls off the chairlift and shoots down the hill.

Can parallels be made between the act of skiing and the craft of writing?

I don’t know: one is physical and the other is mental. If you’re a good skier, then you’re obviously not a stupid person. There might be mutual mentality.

“I don’t think that Norwegians sit down necessarily to write about skiing. It’s all around them, in a way.”
Ingrid Christophersen

Does the depiction of skiing vary across continents?

No, not really. In Norway a lot of it is ski jumping. Hemingway talks about downhill skiing, so does Leni Riefenstahl. Only the different disciplines: cross-country, jumping, Alpine. But everybody loved it, everybody fell around in the deep snow and got tangled up. I think it resonates in the same way with everybody.

Have Norwegian writers embraced skiing as a subject?

They have and they haven’t. They don’t have to sit down and write about skiing because it happens all around them. Nansen wrote about his trip across Greenland, and it happened to be on skis, and when he went to the North Pole it happened to be on skis. And Amundsen was telling Scott how stupid he was that he didn’t take skis. But I don’t think that Norwegians sit down necessarily to write about skiing. It’s all around them, in a way. 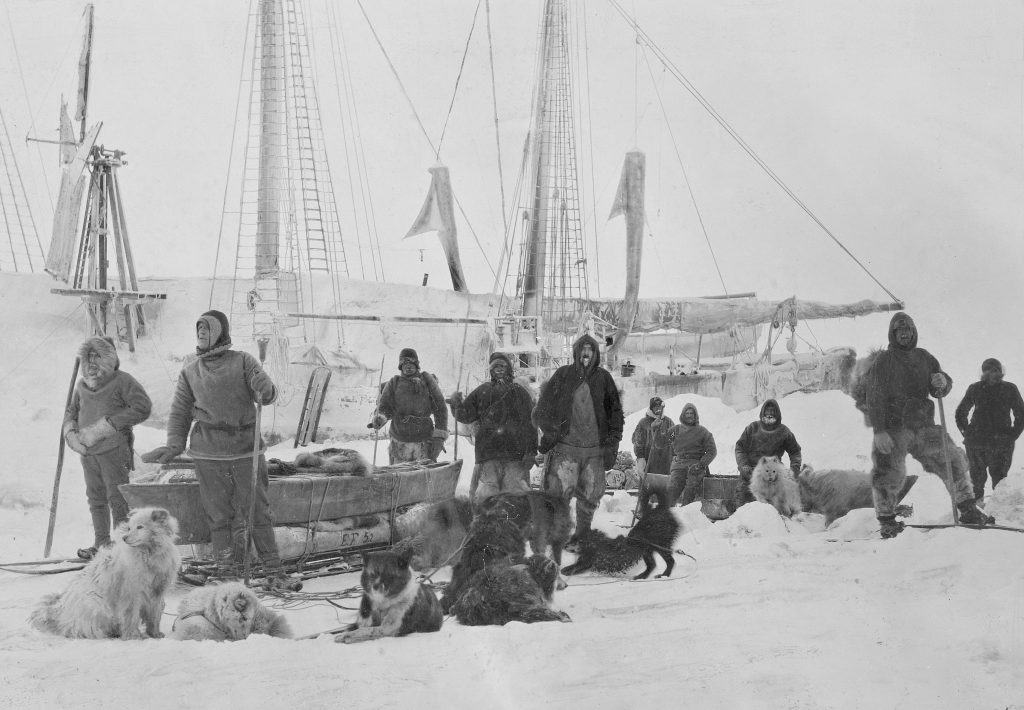 Fridtjof Nansen prepares to leave his ship Fram on 14 March 1895 to begin his ski and sledge journey to the North Pole (Photo: public domain)

Do you have a favourite entry from In Heaven’s Heights?

Well I love ‘The time Ole Hagen showed us what Downhill is all about’ by Ragnar Hovland in the Magic and Mystery section. It’s absolutely delightful. I sent Ragnar a copy and just yesterday he said: ‘I’ve just reread my story and your translation is better than the original’. Which I thought was rather nice.

Also, I love the ski-jumping one because my brother was a good ski-jumper. And then, of course, the one by Karsten Alnaes about the 50-kilometre race with the poor man who has tried all his life. We don’t actually know that he wins but we think he does. 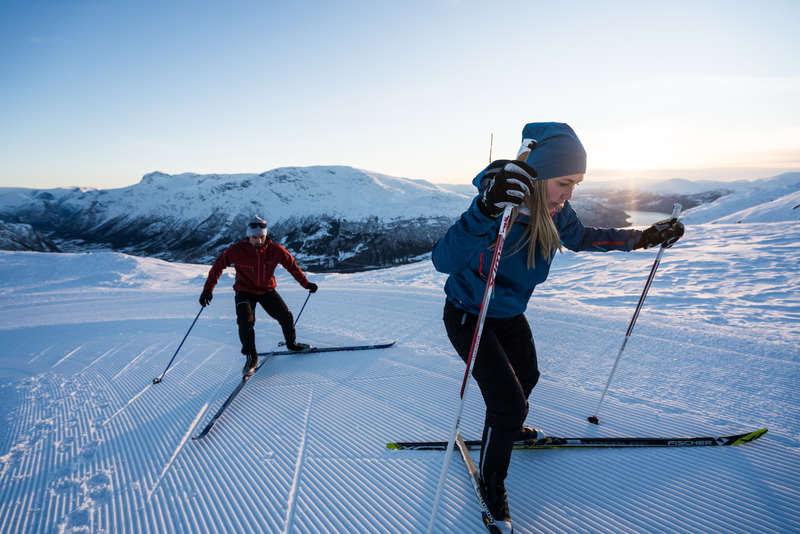 What advice would you give someone preparing for ski season?

I shall précis the advice that I found for the book. Drive slowly for five hours – anywhere – as long as it’s in a snowstorm and you’re following an 18-wheeler. Then fill a blender with ice, hit the pulse button and let the spray hit your face. Leave the ice on your face until it melts. Let it drip into your clothes. Repeat every Saturday and Sunday until it’s time for the real thing.

There is one novel I absolutely love: it’s called Elskere [Lovers] by Terje Stigen. It’s about the idiosyncratic characters in a little village on the west coast of Norway. You have all the extraordinary people, including the local prostitute who makes all the local ladies feel very virtuous; and how the men sneak up to her house every now and then. It’s such a wonderful book. It hasn’t been translated and I wonder if I should have a go at it. Apart from that, my favourite is Kristin Lavransdatter by Sigrid Undset. I read that once a year.

To Heaven’s Heights: An Anthology of Skiing in Literature is available from Unicorn Press.   Proceeds from the sale of the book will go to Snow Camp, the UK’s national snow sports charity.

Top photo: Ingrid Christophersen at a downhill start gate in France, 2020 (courtesy of the author)

1 December 2021 / Christian House is a freelance arts and books writer for Financial Times, Sotheby's and The Art Newspaper. Categories