A Century of Kristin Lavransdatter: Love in the Time of Piety and Pandemics

As Sigrid Undset’s historical trilogy Kristin Lavransdatter marks its centenary, Boyd Tonkin celebrates a literary masterpiece that appeals to readers of both Hilary Mantel and Game of Thrones.

At the end of the epic trilogy that bears her name, and as a lethal pandemic rages, Kristin Lavransdatter looks back on her life in 14th-century Norway. She decides that “that there was not a single day that she would have given back to God without lament or a single sorrow she would have relinquished without regret”.

Kristin is a multi-faceted heroine whose thoughts, doubts and passions speak directly to readers of today. Yet she lives, in Sigrid Undset’s great novel, almost seven centuries ago, in a land scourged at the book’s close by the Black Death. The plague stirs her into one final, extraordinary deed to crown a rich life driven by love, risk and faith. As Undset’s 1,000-plus pages end, readers would no more sacrifice one of them than Kristin would have missed a day. The novel is a majestic achievement – if, in many ways, a thoroughly unlikely one. 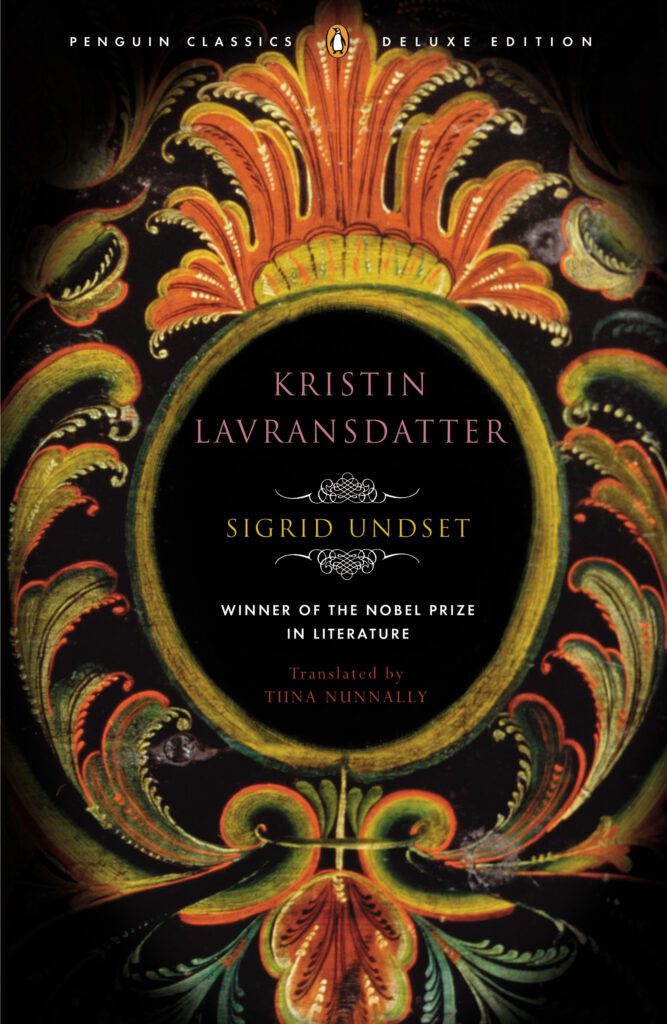 This year marks the centenary of the publication of Kristin Lavransdatter’s opening volume. Born in Denmark in 1882, the daughter of a Norwegian archaeologist father and a Danish mother, Sigrid Undset worked as a secretary but soon made her name in Kristiania (not yet called Oslo) as the author of fashionable, contemporary novels about emancipated women, such as Fru Marte Oulie and Jenny. She married an artist, Anders Castus Svarstad, and raised three children. But the First World War accelerated a personal crisis that pushed her towards the Roman Catholic church; she converted formally in 1924. Separated from Svarstad, she moved to Lillehammer and built the house – Bjerkebæk – that, as a museum, now attracts pilgrims from around the world.

Her journey into ancient faith alone made Undset an outsider in a Norway where intellectuals tended to start out as Lutherans and move towards secular or socialist ideals. Already, as a child, she had rebelled against her progressive school with a “hedgehog-like resistance”. As a woman, and a mother, her grand literary ambitions already outraged some male peers. And with The Wreath in 1920 (the first part of Kristin Lavransdatter), she shamelessly defied the tides of experimental fiction by embarking on a mammoth historical novel set in the mists of the Norwegian Middle Ages.

The trilogy, completed by 1922 with The Wife and then The Cross, proved an unalloyed triumph that would secure for Undset the 1928 Nobel Prize in Literature. Headstrong, wilful, propelled by desire yet tugged with equal force by piety and duty, Kristin herself is one of the most blazingly memorable heroines in modern fiction. Her medieval odyssey takes her from childhood happiness on her clan’s farmstead in Gudbrandsdal, through a reckless, life-defining love for the charismatic adventurer Erlend Nikulaussøn, a decades-long romantic triangle, bloody feuds, heroic motherhood (with seven sons), political intrigue, and the quiet tug of religious conviction. Finally, faith draws her to forsake family to pray, and work, as a lay sister in a Trondheim convent: Undset herself would become a lay Dominican. 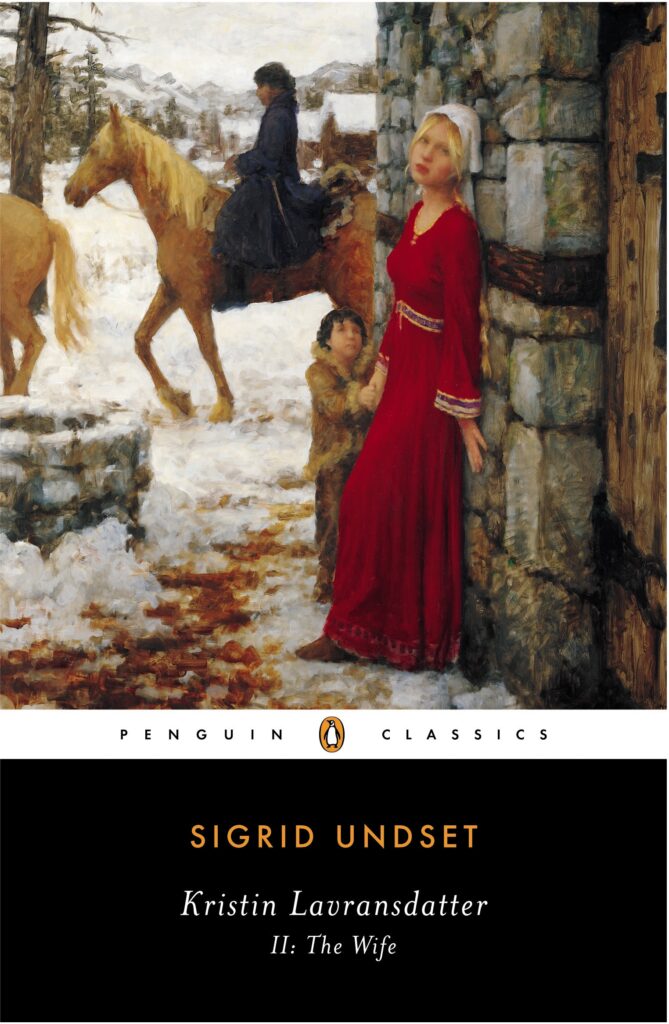 Cover of the Penguin Classics edition of Kristin Lavransdatter, II: The Wife (Penguin)

Kristin learns that “life on this earth was irredeemably tainted by strife”. She tries, and often fails, to subdue the passion that can “temper her will until it was sharp and hard like a knife, ready to cut through all bonds – those of Christianity, kinship and honour”. Those bonds, though, never quite let her rest. The epic struggle that ensues between selfhood and society (and belief) gives unremitting focus to a story that ranges far and wide across the landscapes and communities of medieval Norway. Here, written laws, and the Christian deity, coexist uneasily with an older order of honour, shame, revenge and superstition. In this countryside still saturated in magic and myth, “trolls and goblins and elves” lurk “under every rock”.

An intensive, scholarly researcher, Undset wears her wide learning lightly and brings this distant past thrillingly close. Her alien world feels utterly true, neither archaic nor anachronistic in the life of its people and the feelings they express. Each major and minor character – women and men alike – pulses with credible emotion. Over three volumes, Undset sustains a masterful balance between respect for the real history of a time and place, and characters that strike the modern reader as wholly authentic. 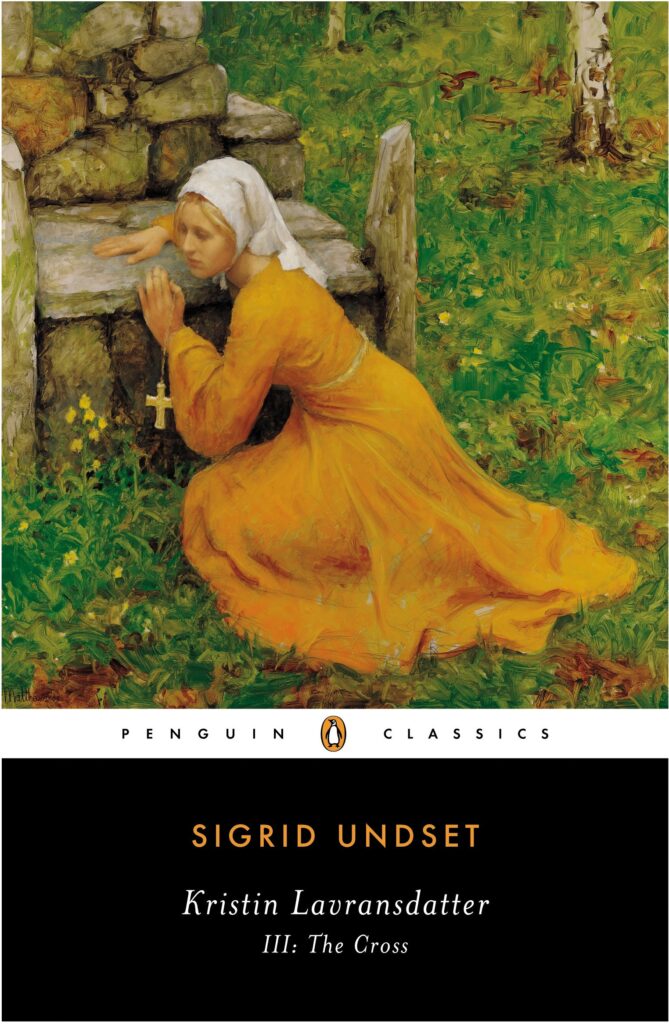 Historical fiction on this scale, at this level, comes along once in a generation at best. Fans of Hilary Mantel’s Thomas Cromwell trilogy would feel comfortably at home in Undset’s Gudbrandsdal. Meanwhile, the picturesque onrush of raids, rivalries, conspiracies, affairs and sorceries also appeal to the taste for outlandish, clash-packed, plot-thick sagas that Game of Thrones has fed.

As for Kristin herself, Undset’s fully rounded portrait of a complete woman from childhood to maturity has a grandeur of design and depth of perspective that still makes her rare indeed. Some recent admirers have likened the trilogy to Elena Ferrante’s Neapolitan novels. The comparison may seem far-fetched but, when it comes to high-definition heroines who leap off the page and into the reader’s imaginations and affections for good, they surely have a point.

Later in the 1920s, by now divorced, Undset returned to Kristin’s 14th-century milieu with the four volumes of The Master of Hestviken: not quite the trilogy’s equal, perhaps, but a formidable achievement. In the 1930s, her work moved further in an explicitly religious direction, with fiction and non-fiction inspired by the Catholic commitment that lent her a lonely eminence in Norwegian cultural life. She also raised an early, and a brave, voice to warn against the rise of fascism in Europe and the Nazi persecution of the Jews. Her son Anders died in battle in 1940 during the German invasion of Norway, and Undset went into exile in the US. From her new home in Brooklyn she kept up her anti-Nazi activism and published a charming memoir of her childhood, Happy Times in Norway. After the Allied victory she returned to her beloved Bjerkebæk, and died in 1949.

All landmark literary classics written in so-called “smaller” languages rely on the talent of translators to make their way in the wider world. In English, Kristin Lavransdatter did achieve early fame. It sold well in the US, becoming a firm favourite among Norwegian-Americans and other readers of Scandinavian descent. MGM Studios reputedly offered Undset $50,000 for film rights in the 1930s – which she turned down. (In 1995, Liv Ullmann directed a Norwegian film of the first volume, The Wreath.) When the American “Book of the Month Club” chose the trilogy in 1929, they dubbed it “the best book our judges have ever selected”. However, Charles Archer and JS Scott’s 1920s translation, with its mock-medieval diction that brings the style of Walter Scott to mind, was off-putting and dated. In the Anglosphere, new eyes opened to the trilogy’s greatness only when, in the late 1990s, Tiina Nunnally started to publish her beautifully voiced and paced translations of the books for Penguin Classics, with their sharp, swift and vividly immersive prose.

When I came to choose the roster for my own reader’s guide to world fiction beyond the English language, The 100 Best Novels in Translation, not only did Kristin Lavransdatter – in Tiina Nunnally’s splendid rendering – immediately earn its place. It struck me that the students of modern fiction who automatically find the likes of Proust, Joyce, Woolf and Kafka on their reading-lists would profit hugely from a knowledge of this unique outlier.

Just when, many critics will tell you, serious historical realism became irrelevant or outdated, these books had proved the opposite. Like her passionate heroine, Sigrid Undset always went her own way. A century on, we should still follow her.

Kristin Lavransdatter is published by Penguin

Top Photo: detail from the cover of the Penguin Classics edition of The Cross (Penguin)

15 July 2020 / Boyd Tonkin is a journalist and author whose writing on arts and books appears in international media including The Financial Times, The Economist, The Times and New York Review of Books Daily. His reader’s guide to global fiction, The 100 Best Novels in Translation, has recently been published in paperback. He is Special Adviser to the International Booker Prize, which he chaired in 2016. Categories