Nobel laureate Knut Hamsun published his groundbreaking, psychological novel Hunger in Norway in 1890, a work based on his own experiences of living in poverty. However, it still resonates today: Hunger is a story of a young man who moves to the big city with dreams of becoming a writer, only to find that in an unforgiving metropolis, friends are scarce and jobs even scarcer.

Playwright Amanda Lomas has written a new adaptation of Hamsun’s novel, to be staged at the Arcola Theatre in Dalston under the direction of her daughter, Fay Lomas, winner of a Peter Hall Fellowship. In her fast-paced adaptation, Amanda Lomas reinvigorates Hamsun’s tale about a mind on the margins and, more than a century since the original novel captured the brutality of urban isolation, asks how much has changed? 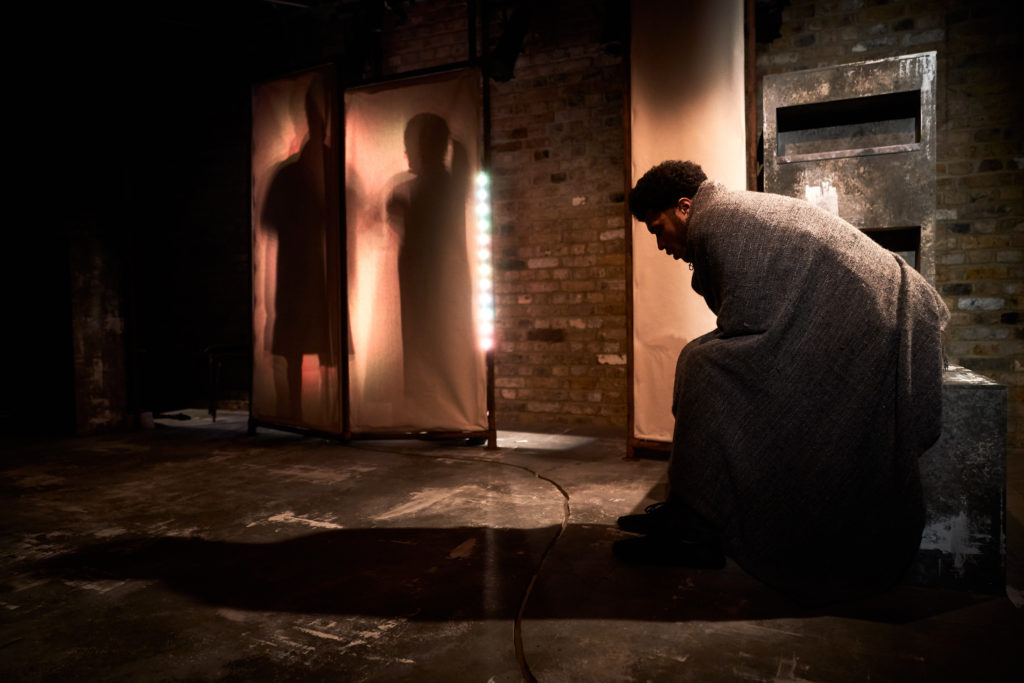 The result is a sensation. “There’s an urgent empathy about Fay Lomas’s production that mimics the jolting intimacy of Knut Hamsun’s first-person novel and swiftly and skilfully draws the audience in,” The Guardian notes, adding that: “Amanda Lomas’s excellent adaptation is finely crafted.”

In between final rehearsals, Oda Tømte met with the pair at Arcola’s atmospheric theatre bar to discover how this mother and daughter team approached a 130-year-old Norwegian tale. 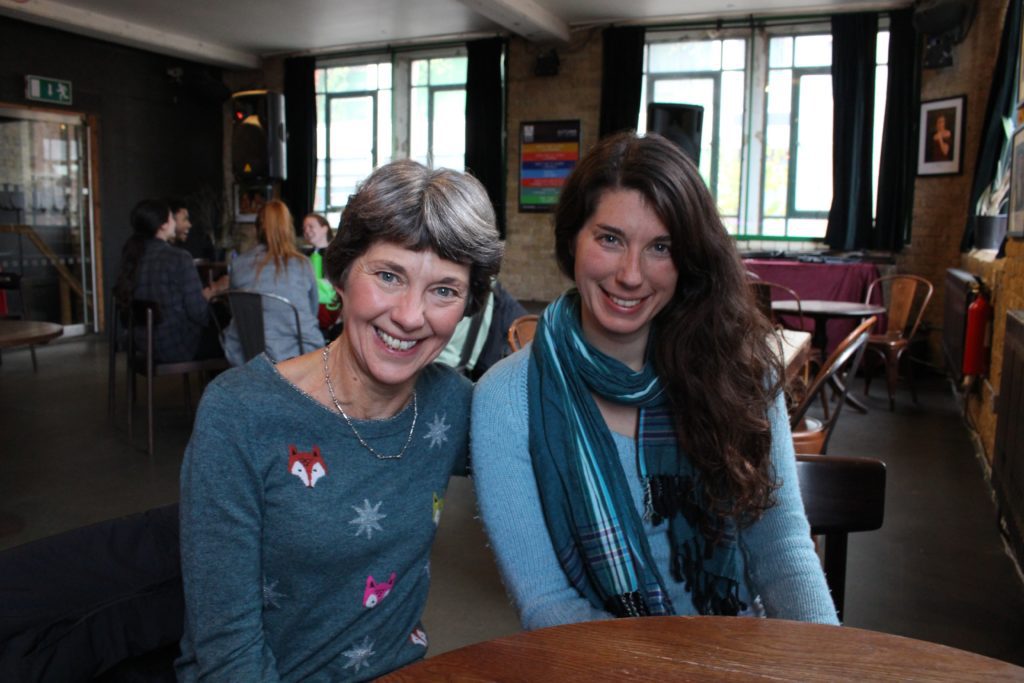 Amanda and Fay Lomas in the Arcola Theatre

How long have you been thinking about Hunger?

Fay Lomas: We have been working with this play for three and a half years. It has been a long process. The cast of four actors are very busy, playing around 30 characters between them. We have been spending this morning doing all the transitions, which has been both fun and difficult at the same time, just because there is so much – they are playing multiple roles at the same time, which demands a thorough work on how to move between the different characters and the different locations.

Amanda Lomas: It has been quite a challenge adapting it into a play. Three of the actors play all of the roles apart from the main character; the young man. We wanted to explore how isolated the main character feels. However, as a spectator, it is terribly boring watching someone being isolated. You need to see them having encounters! Yet, if you are seeing their encounters, they are not completely isolated.

FL: It is hard, because Hunger is, in a way, a story of absence – absence in connection, absence in friendship and companionship, absence of food and absence of shelter – and it is quite hard to show absence on stage. We have been working on how to tell that story without too many encounters. 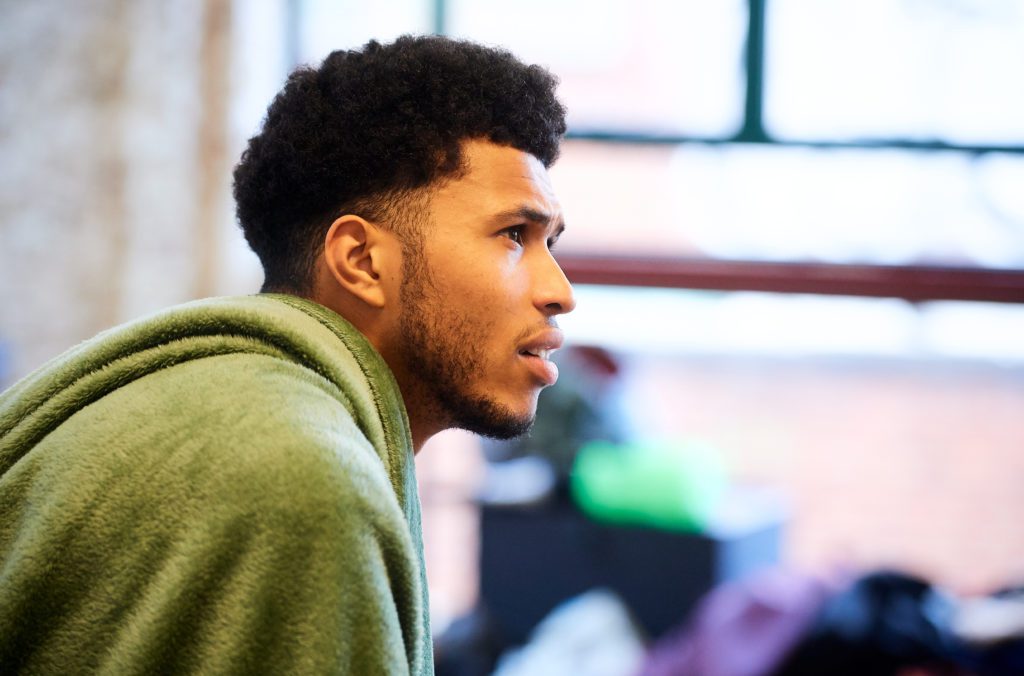 Hamsun drew on his own experiences of being a poor writer in late 19th century Kristiania – the former name of Oslo. What kind of Hunger are we going to see in this production?

FL: We have tried to depict a world that feels timeless. The themes of isolation, homelessness, desperation and individualism are as relevant today as they were when the book was published in 1890. These struggles are still happening every day out in the streets of London. Living in this city, homelessness is something you inevitably are confronted with every day.

So your version of Hunger’takes place in London?

FL: Not literally, no. Similar struggles do happen in London, but also in Oslo and Prague, and in other typical Northern European cities. We wanted to make the location and the time period abstract, so that it is not literally in Oslo in 1890, or in London in 2019 – but in a big, inhospitable city where a young person is struggling. We tried from the very beginning to define, together with the actors, the characteristics of that city – but not with reference to any specific locations at a specific period.

AL: The stage and structure recalls a cold, northern European port at any time during the last 125 years – some things never seem to change. You know the time is not now, but you do not actually know when it is. There are places that we have a common sense of, almost like a nightmarish city – a vision of that city you fear when you are frightened; when you are reaching for your car keys, running away from something unclear. 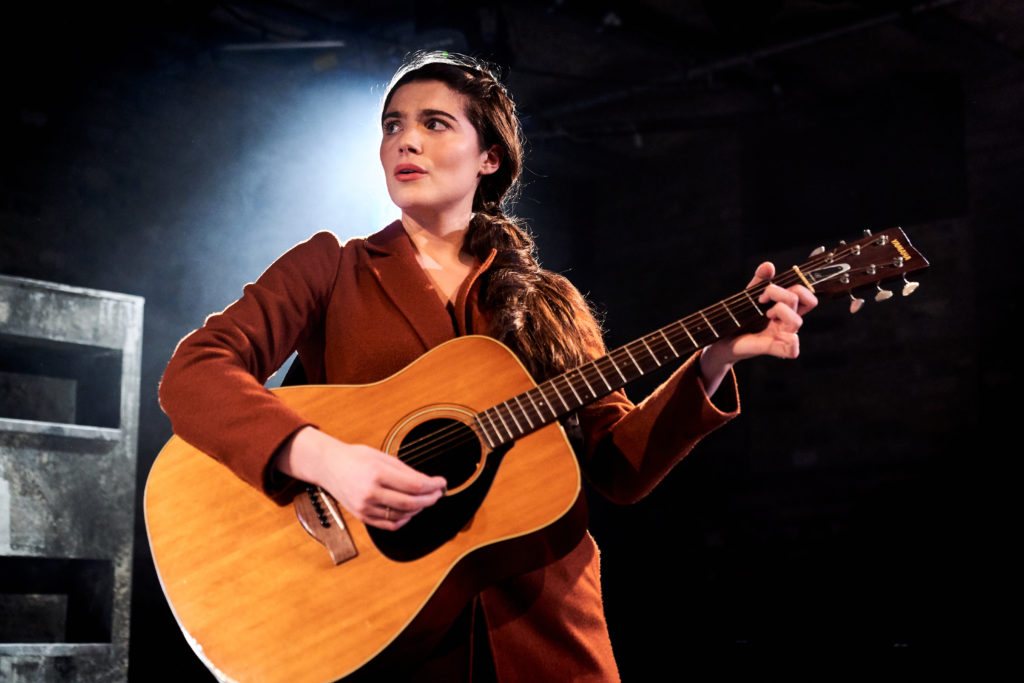 Does the timelessness emphasise that fear?

AL: Yes, precisely. There is an element of everyone struggling.

Is this the first time you have adapted a novel for the stage, Amanda?

AL: No, I started out with Balzac. I am a great fan of Balzac. I have a background in modern linguistics, and I have always been interested in the arts, yet ended up being one of those of my generation – I am 62 – to stay at home with my girls. When a mother at home, thinking I do want to bring up my children, but still be using my mind, I set myself a task of adapting Balzac’s Lost Illusions into a six-episode television series. That was a long time ago – it was a little bit ambitious for a start, and the adaptation never made it to the screen. All of a sudden, one of my daughters is an adult, saying, “Hey, you like adapting things – would you adapt something?” 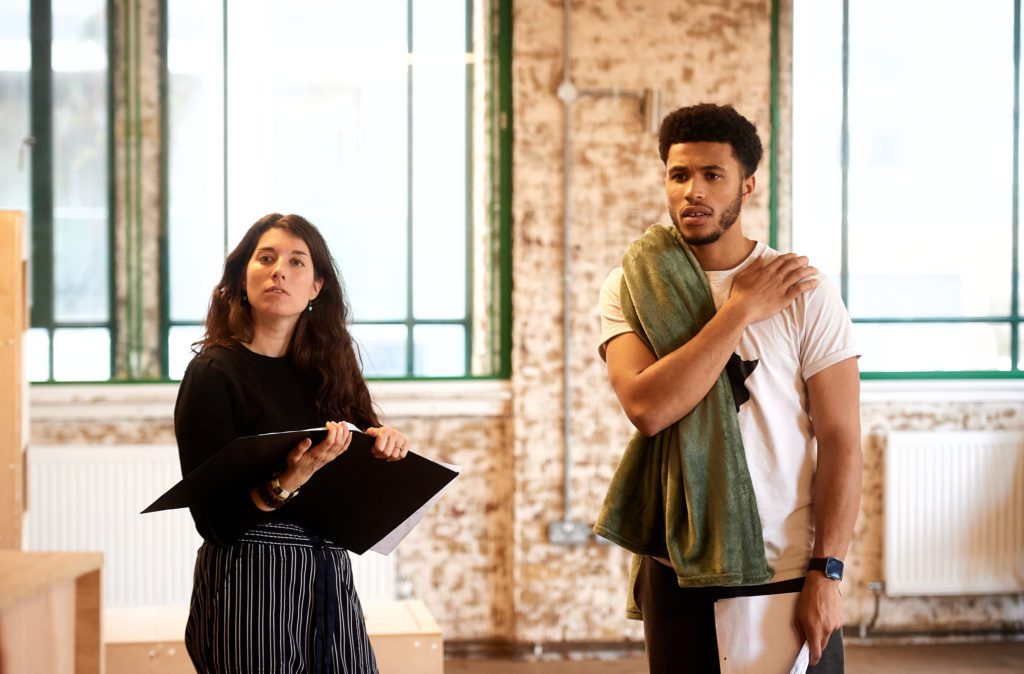 So it was your suggestion, Fay, to adapt Hunger?

FL: Yes. I read Hunger when I was 14, and I remember being absolutely captivated by the novel. That was half a lifetime ago, but when I was thinking of new projects, I came to think of it again. I have a theatre company – Jump Spark – dedicated to doing new versions of international classics. After translating and setting up Berenice by Racine and Blood Wedding by Lorca, I was looking for something else. I felt that Hunger had this relevancy, because of the impact it has had on big cities and on individuals in a big city. My mother and I were talking about it, and found that we both love the novel. That was where our conversation of Hunger started.

FL: The first time I read Hunger, it made me ask: How much has actually changed? Now, in 2019, we do have social security, and yet in this country, the level of homelessness has doubled in five years, from 2010 to 2015. How can that be? It could be 1890 or it could be 2019, and nothing changed in 130 years, really. From that came the desire to make it timeless. 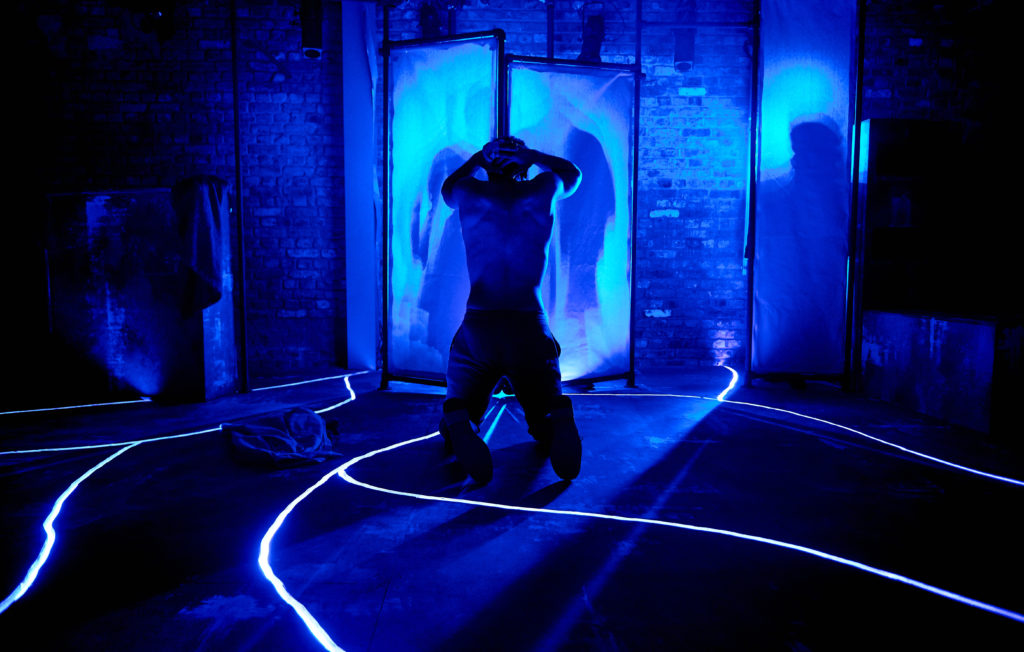 This is not the first time Hunger has been adapted into a play. Have you ever seen other versions, Fay?

Speaking of art – Edvard Munch has been a source of inspiration. There are even moments in the play taken almost directly from his paintings. Munch really captivates the feeling of isolation. Take Anxiety, for example, where you have the three people facing the viewer. That kind of sense of people watching you – the feeling of isolation, even when there are many people around, is something many of Munch’s pictures are depicting. And that felt very helpful for us in the staging of the scenes. 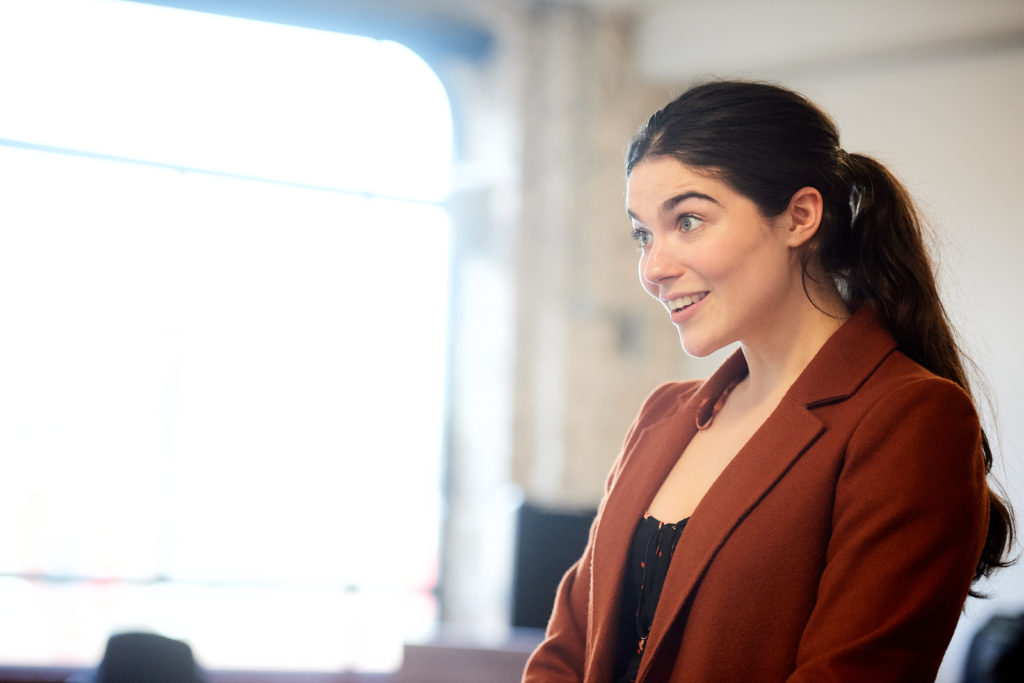 What are the risks when adapting a novel for the stage?

AL: Probably the fear of not doing it justice. Failing to capture what other people see in it, and then disappointing people. Perhaps simplifying the essence of it, if you are not careful. I do not think it matters if you simplify the various details of it – that is probably what a part of the adaptation actually is: being brave enough to say that that detail, which might be something that you really loved, is unimportant for the adaptation, yet stay true to the spirit and the heart of the story.

Hunger is on at Arcola Theatre in Dalston, London, 25 November – 21 December