The pared-back approach to aesthetics and lifestyle shared by the Nordic countries and Japan is being celebrated in a new London venue, as Clare Dowdy discovers.

Simple and functional, sustainable and beautifully crafted. In Europe, these design qualities are associated with the Nordic countries – but they also describe the design aesthetic of Japan. In her new book, Japanese Design since 1945, Naomi Pollock sums it up: “The sculpting of forms, fashioning of materials, attention to detail, and, above all, respect for the hand of the artisan, whether a traditional craftsperson or a factory worker.”

Now, the output of these two regions can be compared side by side in a new venue in London’s Belgravia. Pantechnicon, on buzzy, pedestrianised Motcomb Street, describes itself as a concept store and dining destination. It comprises five floors of restaurants, cafes and shops, which mix and match cooking styles and goods from Japan, Norway, Denmark, Sweden, Finland and other Nordic nations. Norwegian goods include Eikund’s nostalgic furniture and Tom Wood’s restrained and elegant jewellery. 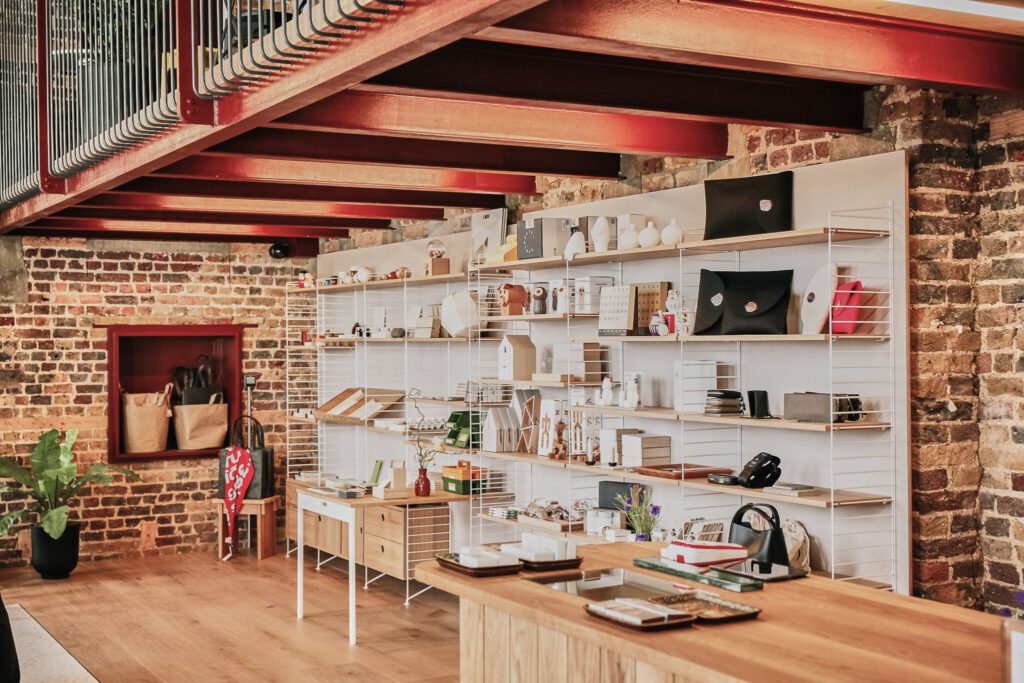 The venture is the brainchild of Barry Hirst, co-founder of a number of gastropubs in Belgravia, including the Thomas Cubitt. The concept was born out of Hirst’s love of Japan and the Nordic countries, which he says “fit together like a hand in a glove. There is most definitely a ‘less is more’ approach to most facets of life, and less chaos in the way they live.” He sees Pantechnicon as “a platform for new creative talent” from the two regions.

To this end, with Pantechnicon located in a district rich with Nordic embassies – and with the Embassy of Japan close by on Piccadilly – the team has established relationships with the different countries. The embassies are, Hirst says, “eager to share art, design and culture with us. It is an enviable position to be in to have such resources at our fingertips.”

Hirst sees Pantechnicon as “a dwell space”. The younger generation, he says “want a destination, they don’t just want to eat and leave. Someone could come here for three or four hours.” They might be tempted to linger by the ever-changing exhibitions, tastings and workshops, where visiting craftspeople will teach skills such as how to repair Japanese crockery in the traditional way, and how to make tofu. 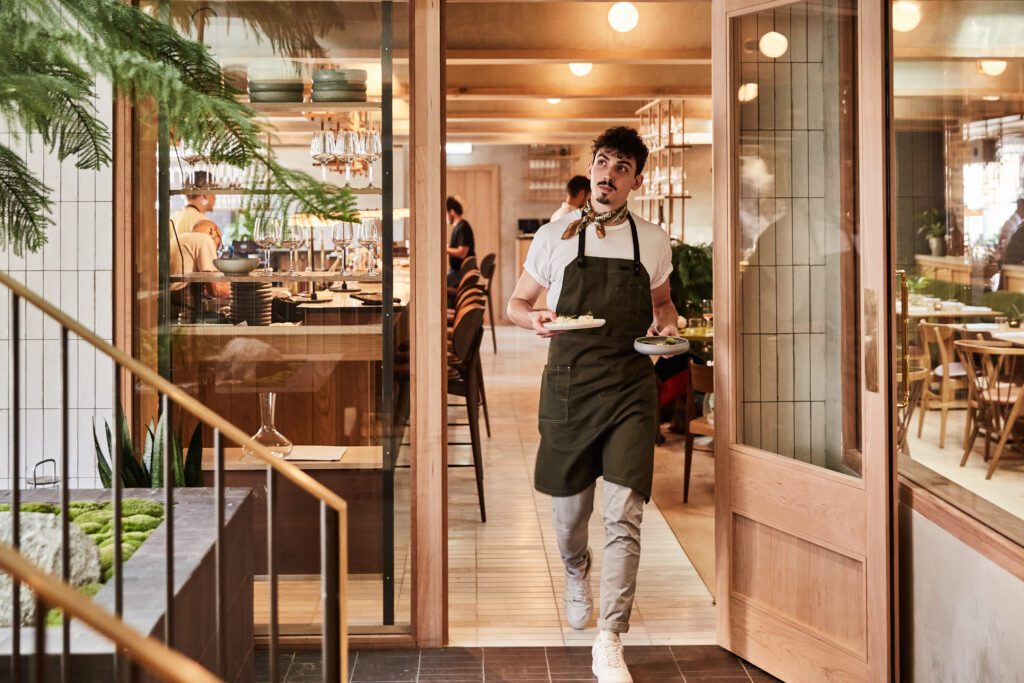 Product selection for the two shop areas is the responsibility of head of retail Shu Terase, who had a two-year stint as Monocle’s retail operations manager. He aims to create “elevated gifting, moments of self-indulgence.”

The Edit shop on the ground floor is full of handcrafted items, including designer tech, ceramics, outdoor equipment, footwear and fashion accessories. The Studio on the first floor has a wider range, including beauty products, and will feature more emerging brands in the future. Here, there will be pop-ups alongside workshops with artists and creators. 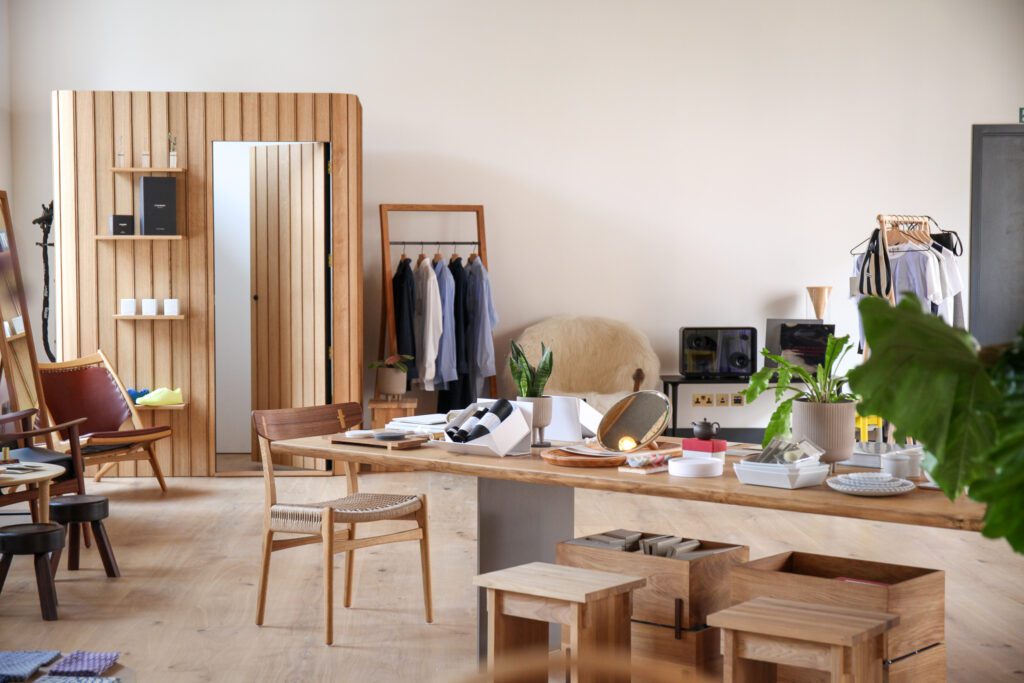 The head of retail has stocked more than 150 brands, many of them as exclusives. This makes Pantechnicon a good place for British shoppers to discover Norwegian gems alongside accessories from Danish label Aesther Ekme, fragrances from Swedish perfumer 19-69, Japanese homewares from Kaikado, and Tokyo Bikes.

So far, the Pantechnicon teamhas sourced a handful of interesting brands from Norway. Eikund, a young manufacturer on the west coast, reissues lost or forgotten furniture designs from Norway’s mid-century heyday. Its most famous piece, the Fluffy chair, is on view upstairs, and its Isbjørn – polar bear – sculptures sit on the stores’ window ledges. 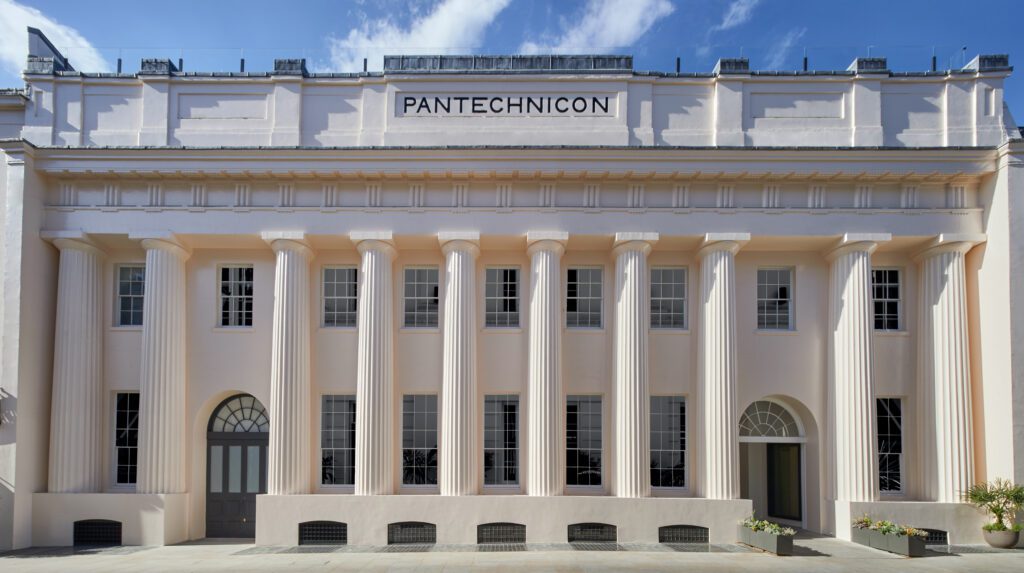 There is minimalist jewellery from Tom Wood, the brand founded by Mona Jensen, which can also be found in Liberty department store. And there are felt caps by Varsity, the headwear company set up by Sebastian and Alex Adams, two brothers with a design workshop and flagship store in Oslo.

Norwegian Rain is in residence as a pop-up in the Studio. It produces stylish waterproof outerwear inspired by the Japanese sensibility and life in Europe’s rainiest city, Bergen, where founder and creative director Alexander Helle was born and raised. Shu Terase is hoping to boost the Norwegian presence, and come Christmas, natural skincare range Alexander Sprekenhus will be on the shelves. 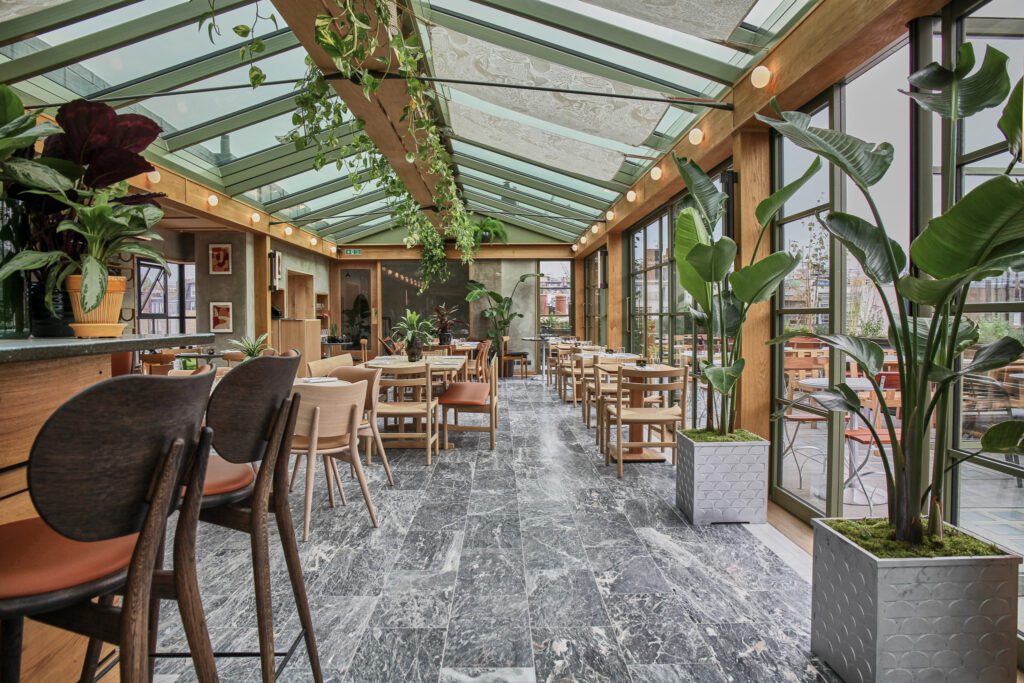 The rest of the building is home to a number of places to eat and drink. On the street terrace, Café Kitsuné is a Japanese-inspired breakfast and cocktail venue. On second-floor Eldr, which means ‘fire’ in Old Norse, serves Nordic-inspired dishes. And in the Roof Garden at the top of the building, there’s a treat for lovers of Norway’s famous brunost – ‘brown cheese’ – as it makes an unexpected appearance in one of the cocktails, called Motcomb Sazerac.

The word ‘pantechnicon’ derives from the Greek words pan ‘all’ and techne ‘craft and art’. In its first incarnation, this wide, white 1830s building, complete with ten imposing columns, was an arts and crafts bazaar. It then became an upmarket warehouse for local residents to store finds from their travels around the world. Pantechnicon’s interior designers have left some walls as exposed brick and put down a floor of polished concrete, for that ‘industrial chic’ feel. This is offset by joinery of oiled timber, warm, natural colours and textures, and some carefully chosen furniture. 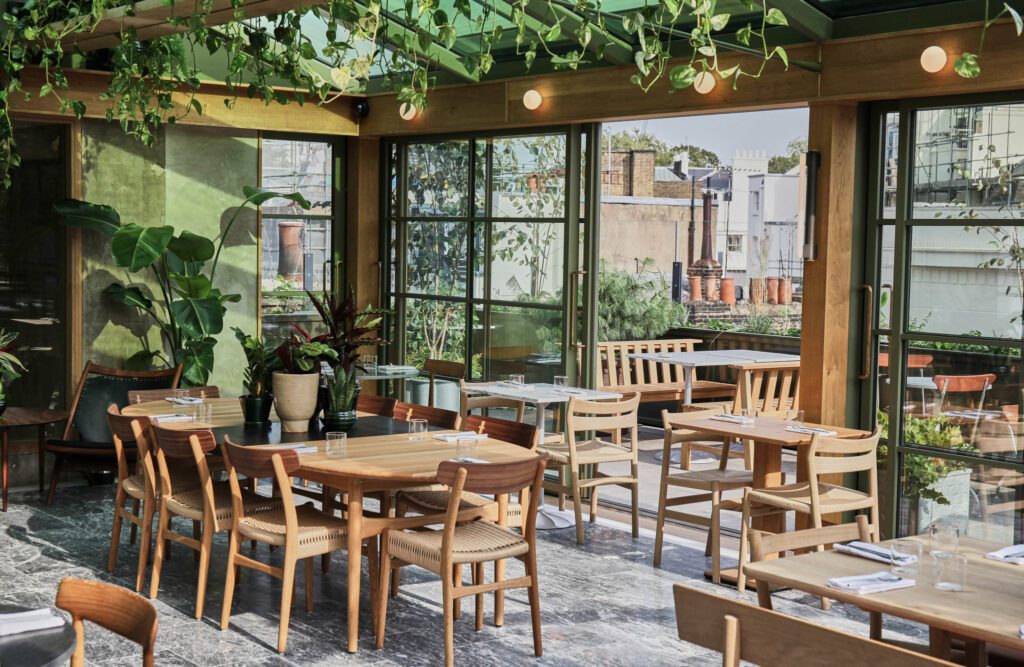 Hirst dislikes contract furniture – standard pieces designed for businesses – so Pantechnicon’s tables and chairs come from 25 different suppliers from across the Nordic region and Japan. (Hence the table and chairs from Eikund in the Roof Terrace restaurant.) This variety, he believes, creates a homely feel.

Japan and the Nordic region might by over 5,000 miles apart, but the aesthetic connection between them has come to the fore in recent years. Their shared design attributes – simplicity and functionality, a love of natural materials, and a deep respect for craftsmanship – have produced a style known as ‘Japandi’ or ‘Japanese minimalism’. It’s a reference to furniture, tableware and interiors featuring clean lines, neutral tones and natural textures. 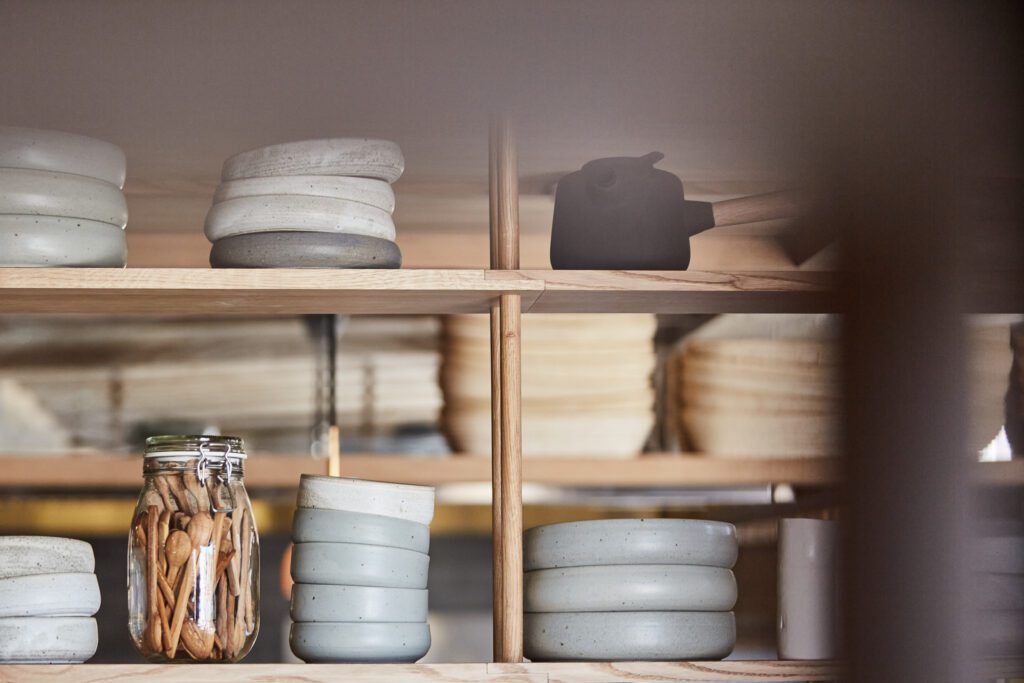 Kris Manalo, senior upholstery buyer at design store Heal’s, defines the trend: “Aspects of the Scandi notion of ‘hygge’, (the Nordic term for the homely feeling of cosiness), and Japanese ‘wabi-sabi’, (finding beauty in imperfection), harmonise to create a stress-free atmosphere.”

This connection has even made its way into museums. From 2015 to 2018, Designmuseum Danmark staged Learning from Japan, an exhibition that explored Japan’s long-standing role as an important source of inspiration for Danish crafts and design. And Japanomania, a blockbuster exhibition at Norway’s National Museum in 2016, highlighted the wide-ranging influence of Japanese art on Nordic art and design around 1900. 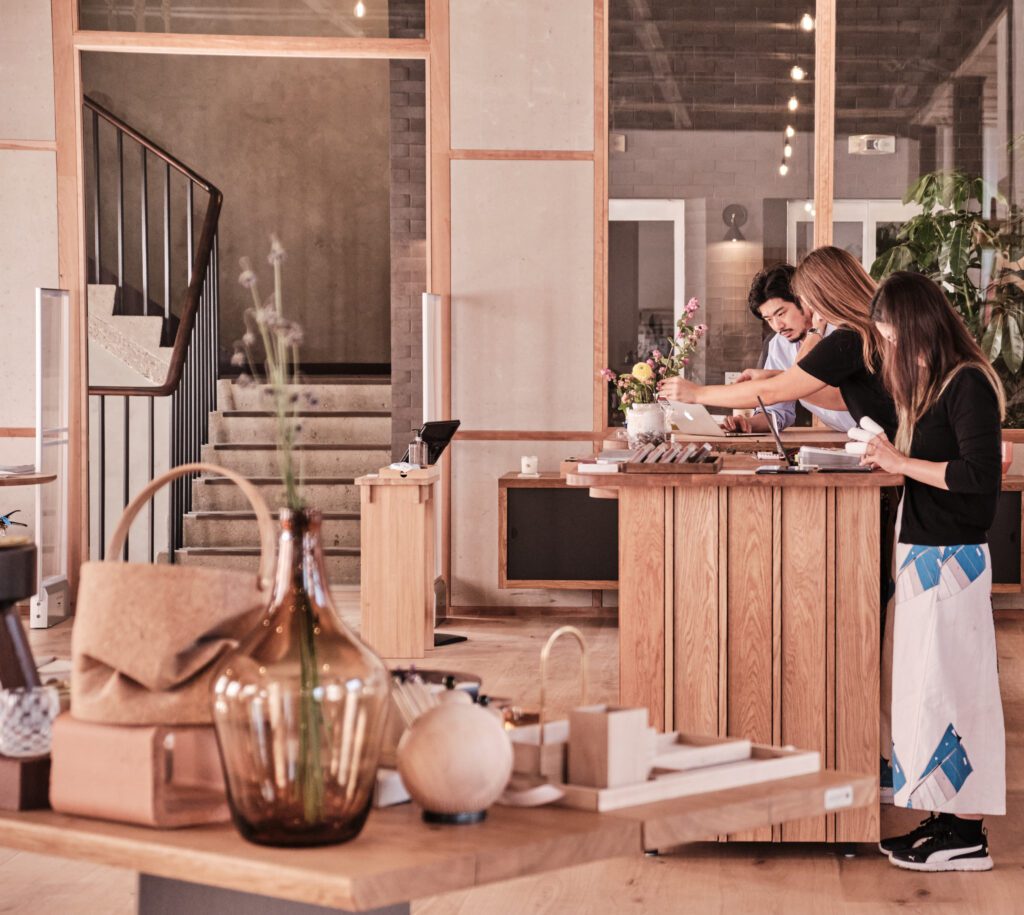 Today, the design duo behind Lamella lighting has, quite literally, fused these qualities together. Tokyo-born Jonah Takagi and Oslo-born Hallgeir Homstvedt bonded over their appreciation of artisanal skills. Homstvedt explains their shared approach: “Furniture is one of very few product categories in our modern world that is not really driven by technology, but rather by aesthetics, materials and craftsmanship. Japanese and Scandinavian products traditionally encompass many of these qualities.”The Lamella lighting collection references the traditional Japanese pleated paper lantern – itself inspired by the underside of mushrooms – and yet is handmade by craftspeople at Le Klint’s factory in Odense, Denmark.

Back at Pantechnicon, Hirst adds that “our focus is really on the common shared values [of the Nordic nations and Japan] and an exploration of the more subtle similarities, especially those displayed in artisanal and design spheres, art, language and of course food and drink.” On the shelves and menus, visitors can judge the depth of these shared qualities for themselves. To the untrained eye, it’s difficult to know which products come from which continent.

21 October 2020 / Clare Dowdy is a journalist who writes on design, architecture and branding for a variety of publications and websites including BBC online, Wallpaper, Monocle and The Guardian. Categories