Take a singer with a whole lotta soul, add a collection of the finest young musicians around and sprinkle with the perfect combination of creativity and sass. And the result? Fieh, an eight-piece outfit from Norway who collectively put the fun in to funk! Drawing together such a talented and diverse group of musicians will always make defining their sound a challenge – a fact acknowledged by the band, who refer to themselves as the “something-funk-neo-disco-rap-soul-band” – but it works to their advantage, resulting in music that simultaneously oozes charm, character and charisma.

Fronted by Sofie Tollefsbøl from the Einafjorden region North of Oslo, 2019 has already been a busy year for Fieh. Since signing to Decca records at the turn of the year, they’ve released a trio of stellar singles in 25, Flower and Brain, and performed to sell-out crowds in London at a headline show in Hackney and at the Lexington with Ja Ja Ja Music. Delighting audiences with their effortless on-stage charm, colour co-ordinated outfits and relentlessly catchy music, it’s no surprise that Fieh are being touted as yet another hugely exciting musical talent to emerge from Norway.

We caught up with Sofie ahead of another hotly anticipated performance at the Great Escape Festival in Brighton this weekend (10th May, 19:15 @ The Arch), where she told us what to expect from their performance, where they draw their musical inspiration from and what it feels like to have one of the most famous songwriters on the planet support your music. 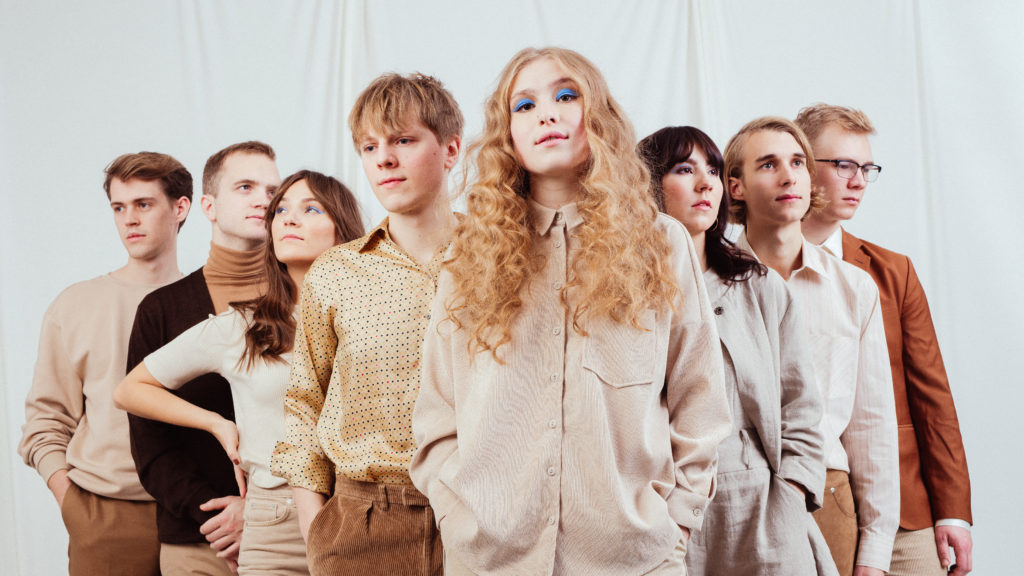 For those that haven’t heard of Fieh, can you tell us a little bit about yourselves?

We’re a band with 8 members, who have played together for around 4-5 years. I gathered the band and I’m the band leader. From the start we’ve been very much inspired by different types of soul, RnB, hiphop, jazz, those kinds of things, but I feel like the project just develops on naturally, and I’ve got no idea what it will all develop into. We try to include every members taste in music, which is a lot of different stuff! As long as we make music that we like ourselves and have fun, that’s the most important thing for us.

You signed to Decca records at the beginning of the year and you’ve since released three new singles, all of which have been fantastically received. What’s next for Fieh?

Little do I know about the future! But I hope we will play many many shows and make several kick ass records!

You’ve said before that giving people a live experience is as important as the music for you. What should people who are coming to watch you perform at the Great Escape Festival this weekend expect?

They should just come with an open mind and maybe bring their dancing shoes.

You’ve already had support for your music from Elton John. How does that feel?

It’s surreal for sure, I’ve just heard his voice say those words about us, but never met him or anything, so it doesn’t even feel real actually. He is an unbelievably great songwriter, needless to say.

Who would you be most excited to work with in the future if you could?

I’m already excited and grateful to be working with the fantastic musicians in my band. There are also a bunch of wonderful Norwegian musicians who are our friends – some of which play on our record –  who are truly exciting and inspiring to work with. And then of course there’s André 3000, Kendrick Lamar, Erykah Badu, Questlove, and all of the band’s idols, who are many. But first and foremost, I’m already inspired by working with my band and other young Norwegian musicians.

Can you recommend some upcoming Norwegian artists/acts for us to look out for? There’s going to be lots of Norwegian talent at the Great Escape Festival – is there anyone there that you’re excited to see?

1. Pom Poko. They are playing Great Escape, do not miss them! You need to see them.

2. Billy Meier. Released an album called Sounds From Erra in February, which is a wonderful album.

Catch Fieh at the Great Escape Festival in Brighton Friday 10th May, 1915 at The Arch.