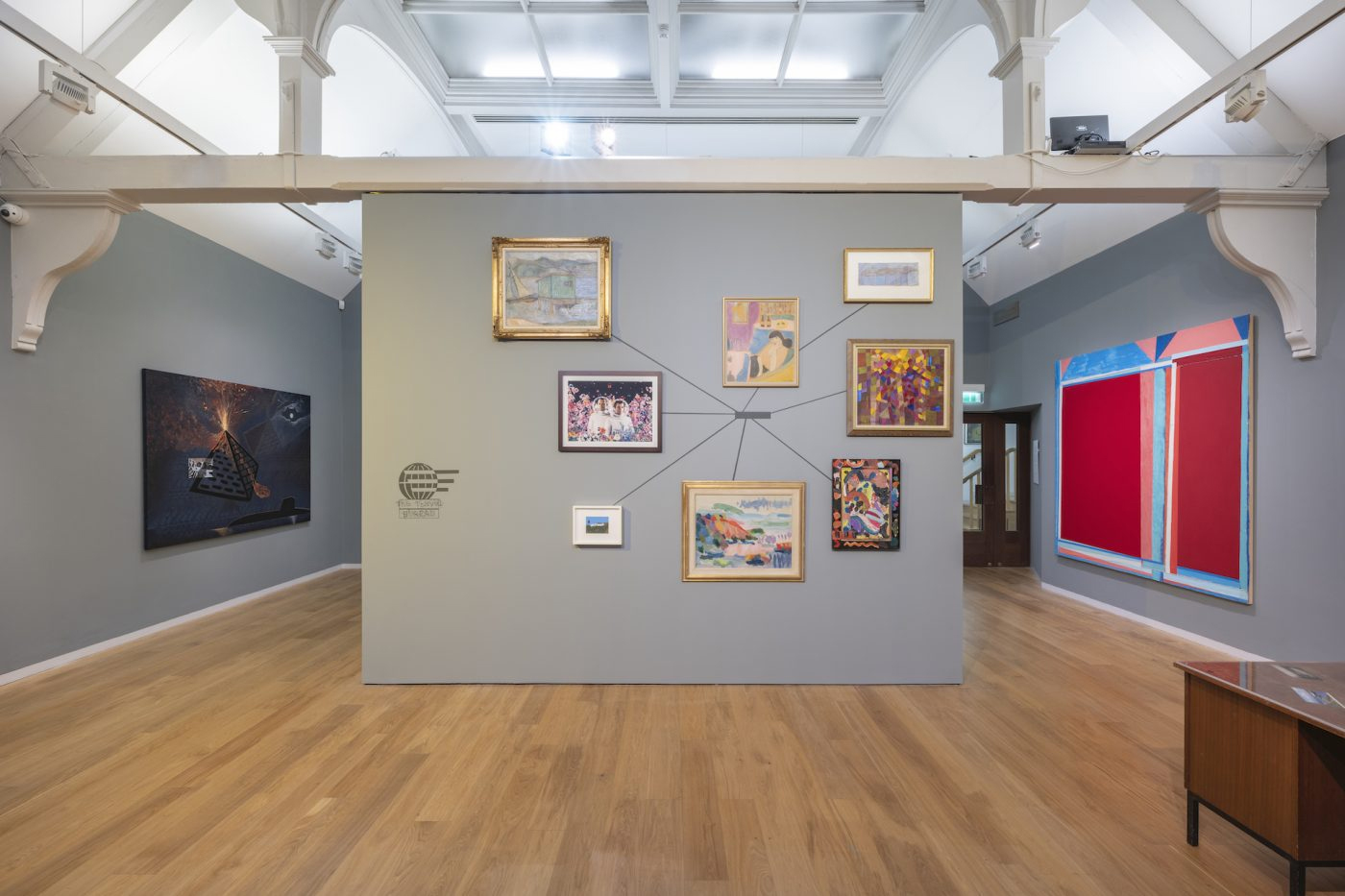 Art lovers in search of vicarious globetrotting pleasures should make their way to The Travel Bureau, Selected by Paulina Olowska, the new exhibition of works from the Christen Sveaas Art Foundation at the Whitechapel Gallery.

Paulina Olowska, the Polish contemporary artist responsible for this selection from the collection of Norwegian businessman, collector and philanthropist Christen Sveaas, states that a gallery can act as a travel bureau “where works of art are portals into myriad destinations imagined by artists.” 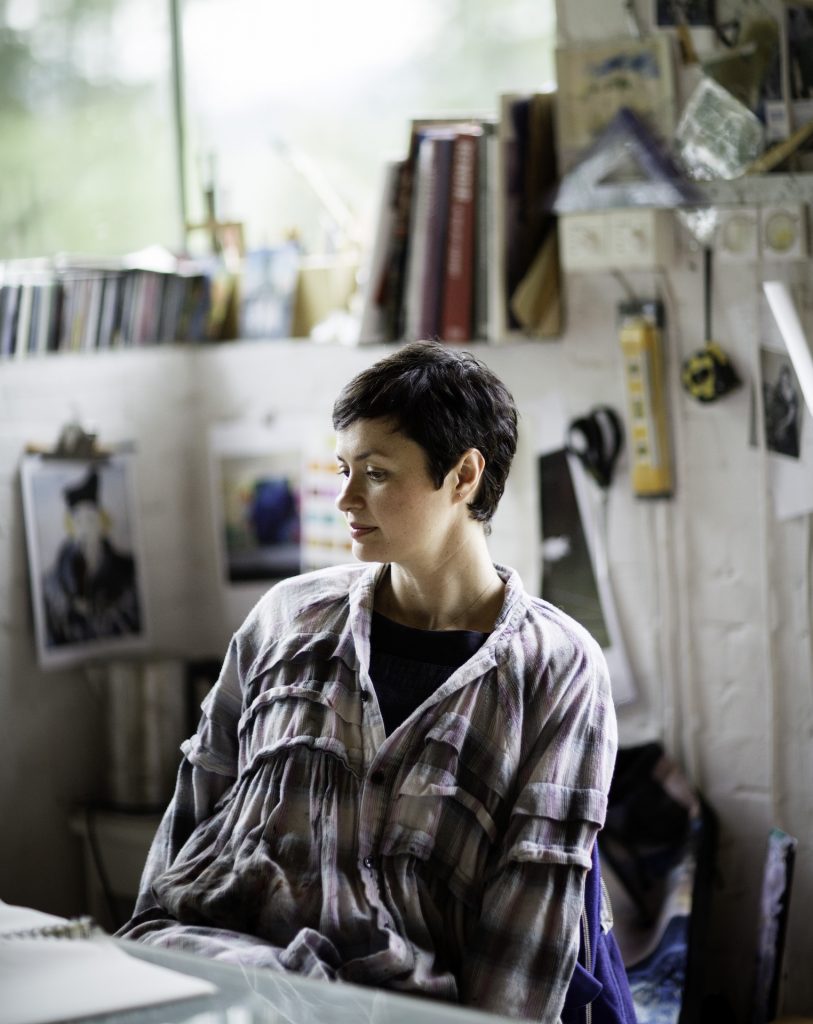 Evidence of her theory can be found in her selected works by Norwegian artists, all executed in the 20th and 21st centuries, exhibited alongside paintings and sculptures by international figures, including Marina Abramović, Ed Ruscha and Gillian Ayres. While some Norwegian works – such as those by Thore Heramb and Oluf Wold-Torne – address the Nordic landscape, others take inspiration from subject matter further afield, or even conceptually situated. As illustrated by the works below, colour is the binding agent to these disparate, often joyful, Norwegian works.

Later this spring, Olowska’s work – high-realist paintings with modern fairy tale narratives – will be the subject of ‘Paulina Olowska: Her Hautology’, a major survey exhibition at Kistefos Museum, the institution founded by Christen Sveaas and housed at his family’s wood pulp mill north of Oslo.

This exhibition is the second in a series of four at the Whitechapel, following the first exhibition of works selected by Ida Ekblad which was covered in October by Norwegian Arts. 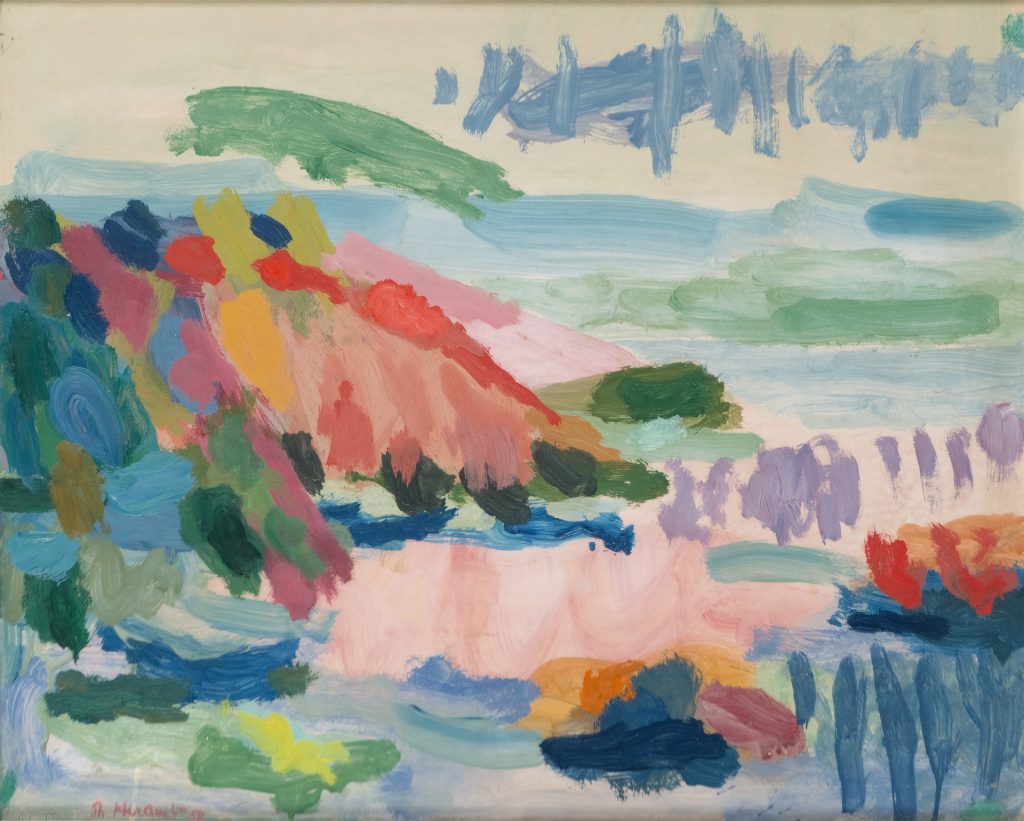 The 20th-century works of the Norwegian painter Thore Heramb reveal the influences of the French Impressionists, the Cubist movement and the mid-century American colourists, whilst achieving a highly illustrative character all of their own. Heramb’s Landskapskomposisjon (1958), which can be seen at Whitechapel, brings the colours of the Mediterranean to the Norwegian landscape in loose, joyful strokes.

Born in Oslo in 1916, Heramb studied at the Norwegian National Academy of Fine Arts and in the late 1940s completed decorative designs for the Akers herredshus, including motifs inspired by the Akerselva River that runs through Oslo. 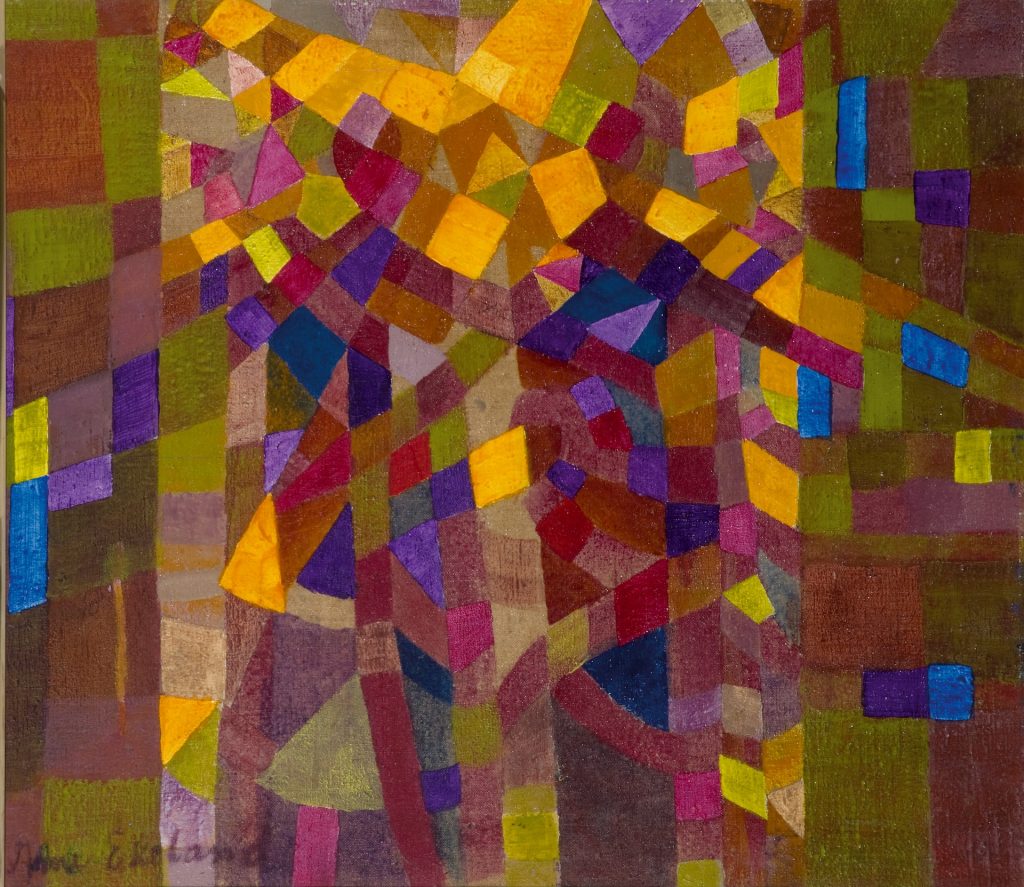 With major paintings and drawings in the soon-to-open Norwegian National Museum, including masterpieces such as The Last Shots (1940) and Occupation (1944), Ekeland is today seen as one of Norway’s key 20th century painters. A communist, his work displayed his politics and humanist stance. In the post-war painting on view in London, Møte i porten (Meeting at the gate) from 1965, the artist created a fragmented, kaleidoscopic composition that is more cheery than much of his oeuvre.

Born in 1908 in Eidsvoll in Viken County, a commuter area for Oslo, Ekeland lived and worked in the region his entire life. He developed a distinctive style – often melancholy, sometimes startlingly complex in their arrangements – that he pursued, honed and riffed on at his home in the village of Bøn. 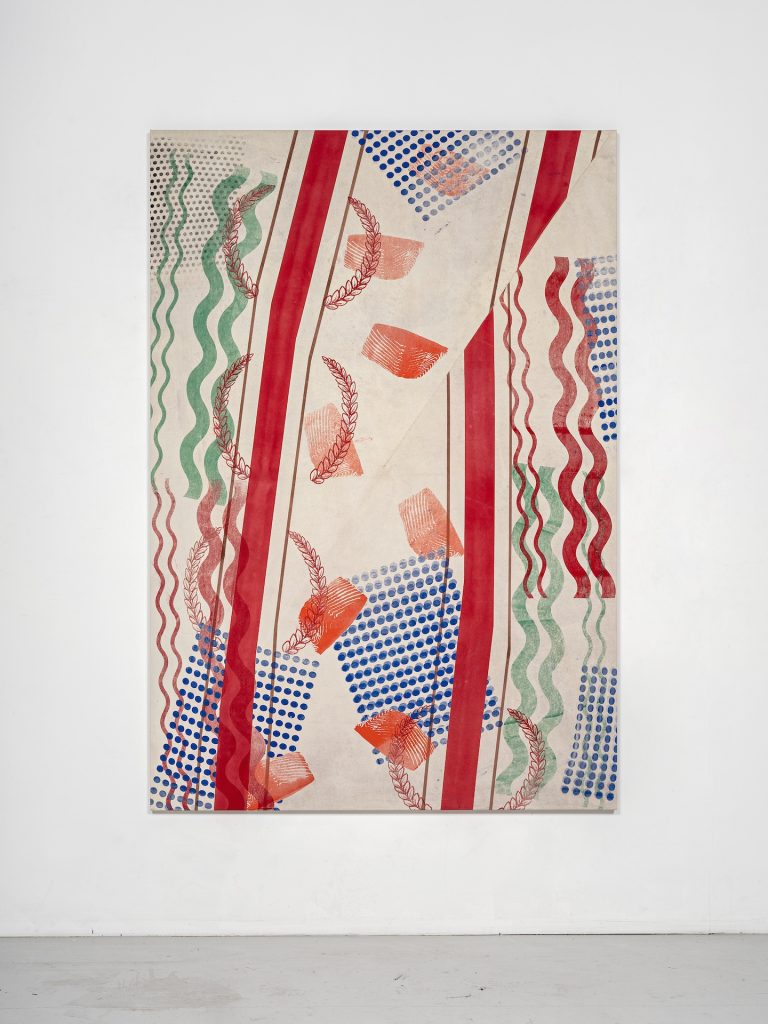 Fredrik Værslev’s Untitled (2018) show the contemporary artist pursuing his obsession with monumental geometry, a hazy borderline-blurring space somewhere between structural studies and painting. His composition here – incorporating both spray paint and acrylic – is a vortex of grids and waves, dots and fingerprints, suggesting rail lines and water, industry and people.

Værslev was born in 1979 at Moss and now has a studio down the Oslo Fjord at Drøbak. His works often possess maritime elements, such as sail, anchor, rope and shoreline motifs, and other aspects from his elementally changeable surroundings. And, like Edvard Munch, he has been known to weather paintings outside his studio. 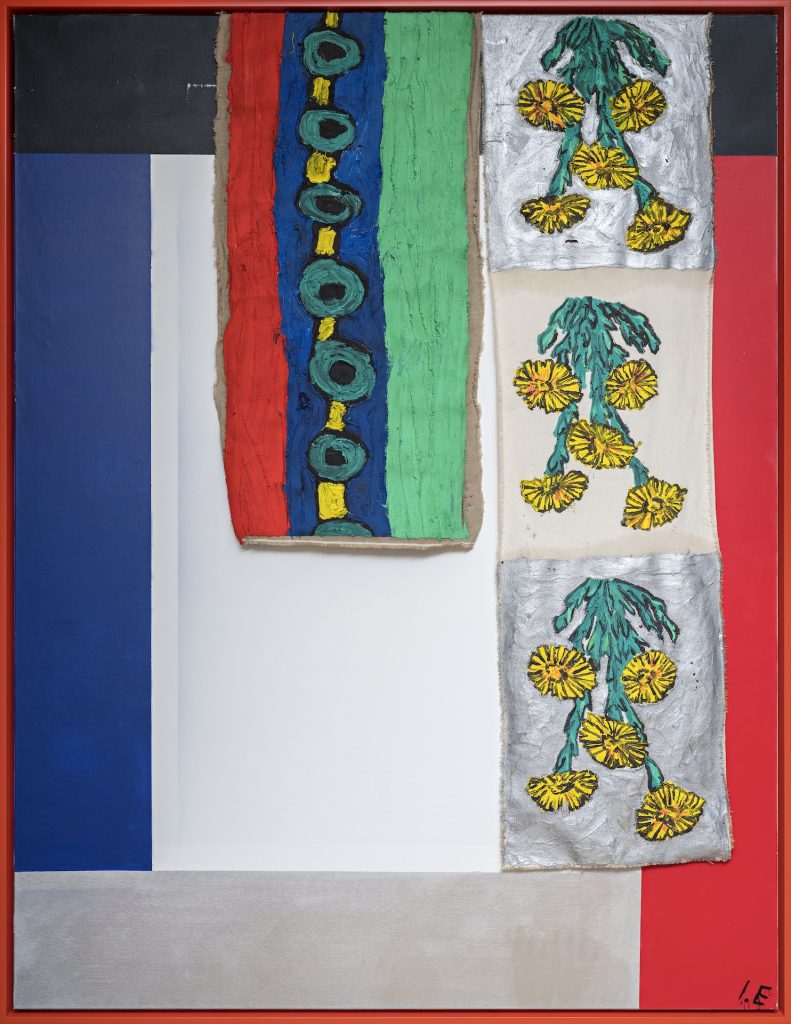 In late 2021, Ida Ekblad, the multi-media artist from Oslo, selected the first group of works from the Christen Sveaas Foundation to be shown at the Whitechapel Gallery. Her selection, titled ‘This is the Night Mail‘, looked at how the nocturne – of varying kinds – was represented within the collection. Ekblad studied at Central Saint Martins College of Art and Design in London and her own work is often large, whimsical, cryptic and colourful. And that’s just her paintings – she also creates performances, installations and sculpture. In 2021 her sculpture A Deadly Slumber of All Forces was unveiled at Kistefos.

The Proofreader (2017) – which combines acrylic, lacquer, ink, puff and plastisol – is a characteristic Ekblad mash-up. “Whatever sense I find is primarily an aesthetic sense,” she noted in 2018. “In painting, sculpture, and via material twists and turns, I am striving to make a personal and decent pattern of what happens to come my way.” 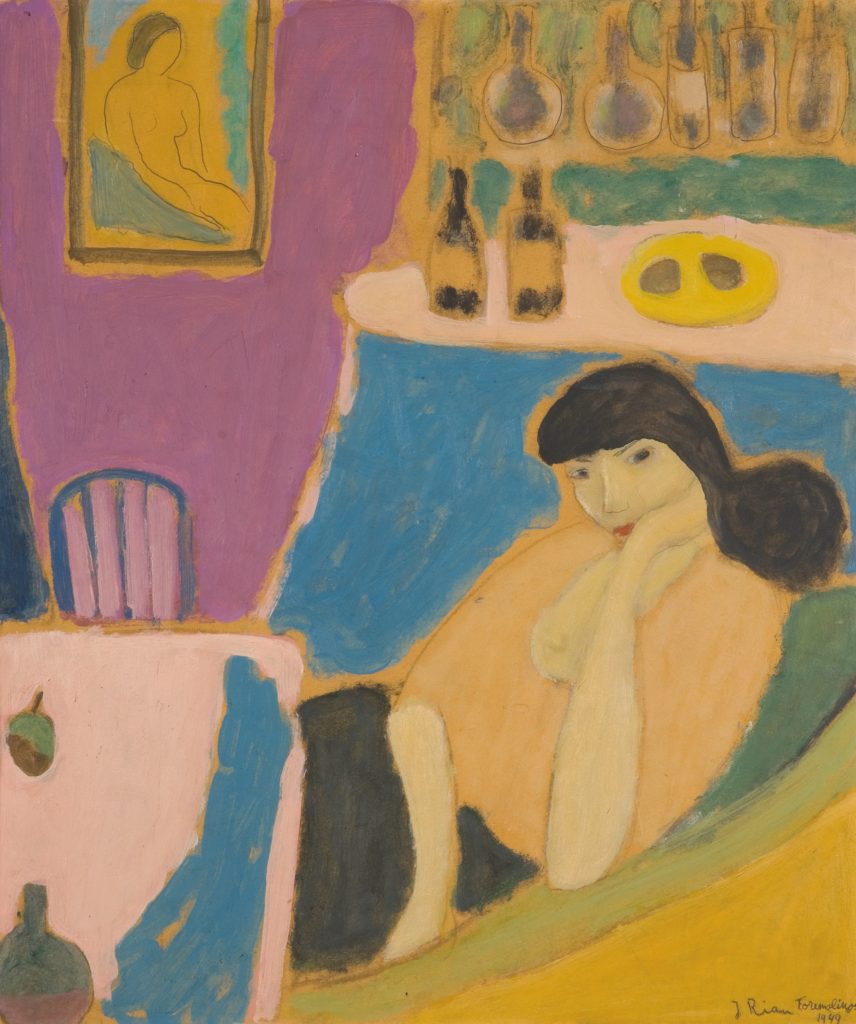 Born in 1891, the son of farmers from Nord-Trøndelag, Johannes ‘Johs’ Rian could be described as Norway’s Matisse. His sensual, boldly-coloured figurative and abstract paintings echo the French master’s technique and preoccupations. The influence was perhaps unsurprising: Rian studied at the Norwegian National Academy of Fine Arts under Henrik Sørensen, who had earlier studied under Matisse.

Rian came to painting late, having been both a farmer and a violinist before taking up the brush, aged 37. Spansk restaurant (1949) is indicative of his heady-hued romantic approach, with its enigmatic female figure looking out at the viewer from an interior alive with purple and yellow decoration and a backdrop of wine bottles. 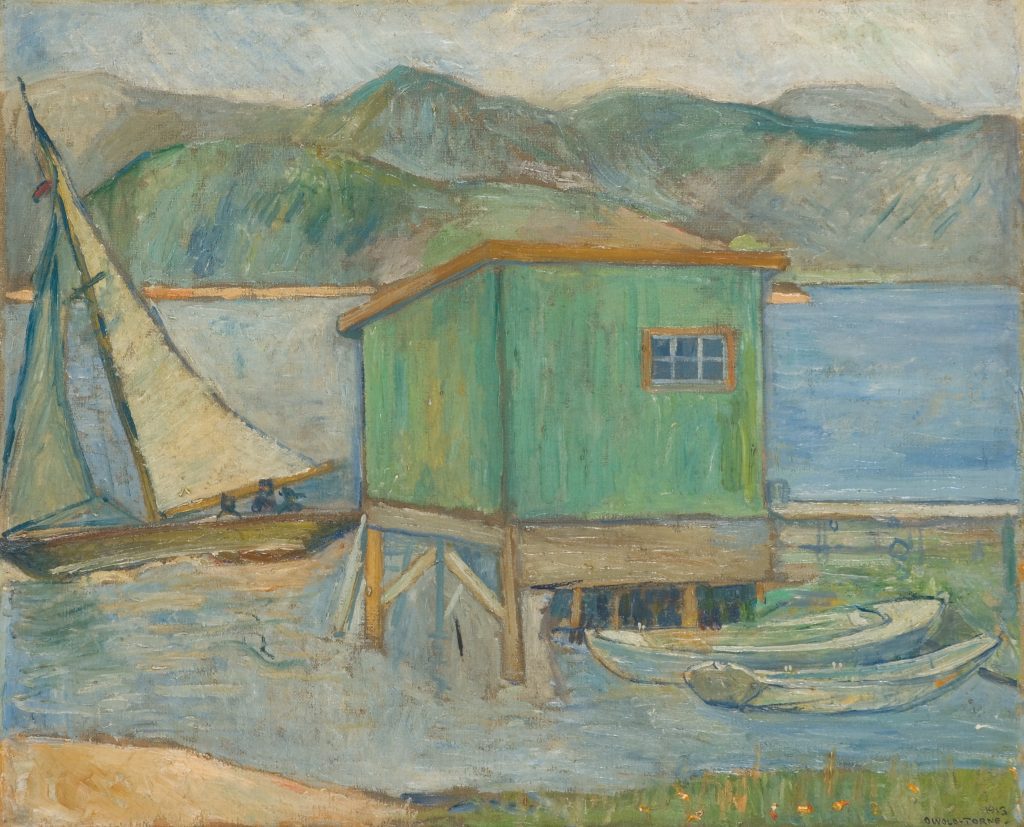 Another Norwegian with an eye on the south of France was Oluf Wold-Torne: his landscapes of Norway reflect his love of Cézanne. In Wold-Torne’s late painting Seilas ved badehus, Holmsbu (Regatta near a bath house, Holmsbu) from 1913, he conjures up a pared-back breezy view of the Oslo fjord, with its sailing boat and sun-dappled shoreline, that could have been painted on the Provencal coastline.

Wold-Torne was born in the old town of Son, south of Oslo, in 1867. Travel was to guide his artistic philosophy: he studied briefly in Copenhagen before spending periods in Paris and Florence. His naturalist eye can also be found in his motifs for stained glass, tapestries, porcelain and jewelry, sometimes designed in collaboration with his wife, the painter and textile artist Kris Torne.

18 February 2022 / Christian House is a freelance arts and books writer for Financial Times, Sotheby's and The Art Newspaper. Categories