As the Whitechapel Gallery in London stages the first of four exhibitions of works from the Christen Sveaas Art Foundation, Christian House delves into a dark world of nocturnal drama, beauty and peculiar juxtapositions.

Of the many maladies endured by Edvard Munch, his insomnia is one of his lesser known. Due to childhood illness, he spent much of his youth in bed, triggering a fear in adulthood – “in my subconscious, my bed has become a torture chamber,” he wrote. When the insomnia became too much, he would take the sleeper train to Stockholm or Gothenburg. The journey would lull him to sleep.

The story springs to mind while viewing This is the Night Mail, a new exhibition at the Whitechapel Gallery, which assembles a selection of sculptures, objects and pictures – including several by Munch – spanning the 18th to the 21st century and of largely Norwegian origin, each touching on the mercurial theme of the night. 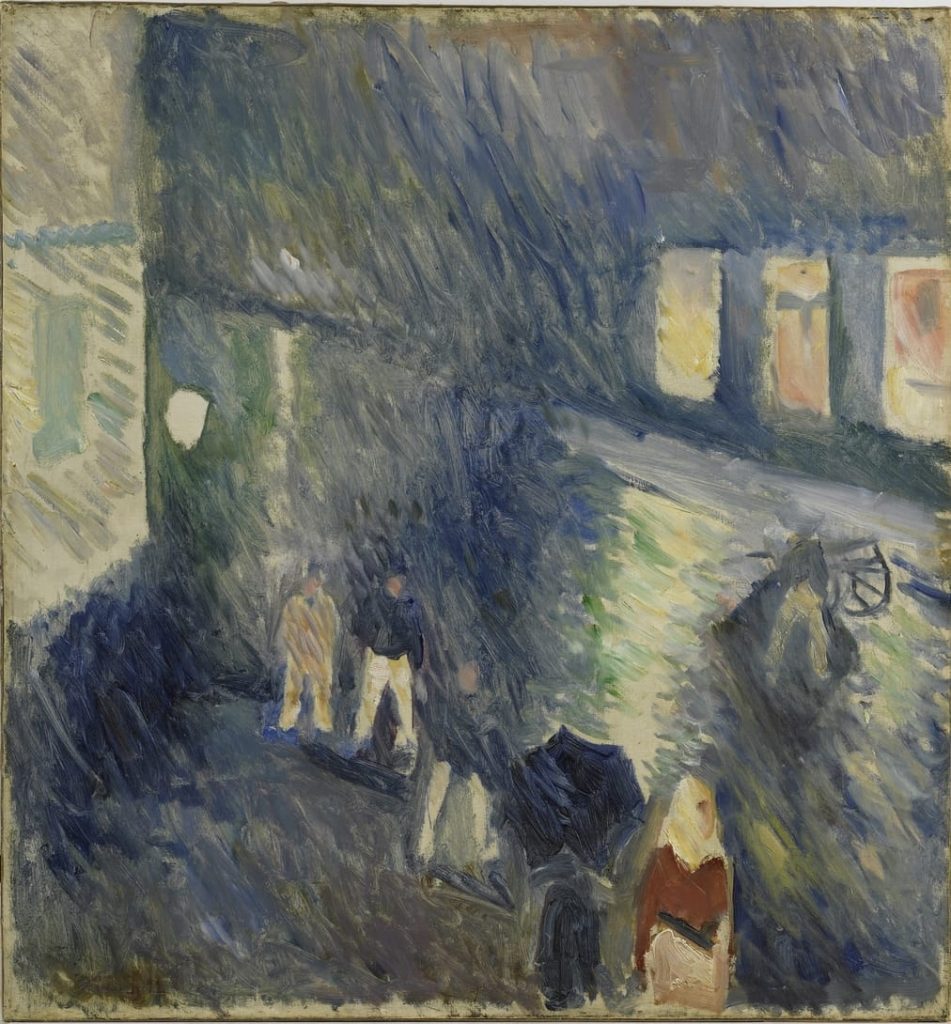 All of the works are from the art foundation formed by Christen Sveaas, the Norwegian businessman, philanthropist and founder of the Kistefos Museum near Oslo. The Whitechapel selection has been made by the Norwegian contemporary artist Ida Ekblad in what will be the first of four displays from the collection over the coming year, each one formed by a different “artist selector”.

As an artist, Ekblad is known for her vibrant maximalist paintings and sculptures – in which “the good, bad, ugly and beautiful mingle in delicious yet uneasy proximity,” explained one critic – and, at the Whitechapel Gallery, that translates into a jarring, entertaining and inspired patchwork of pieces placed at varying heights – in a contemporary reboot of a salon presentation – mixing mediums and moods, periods and styles. 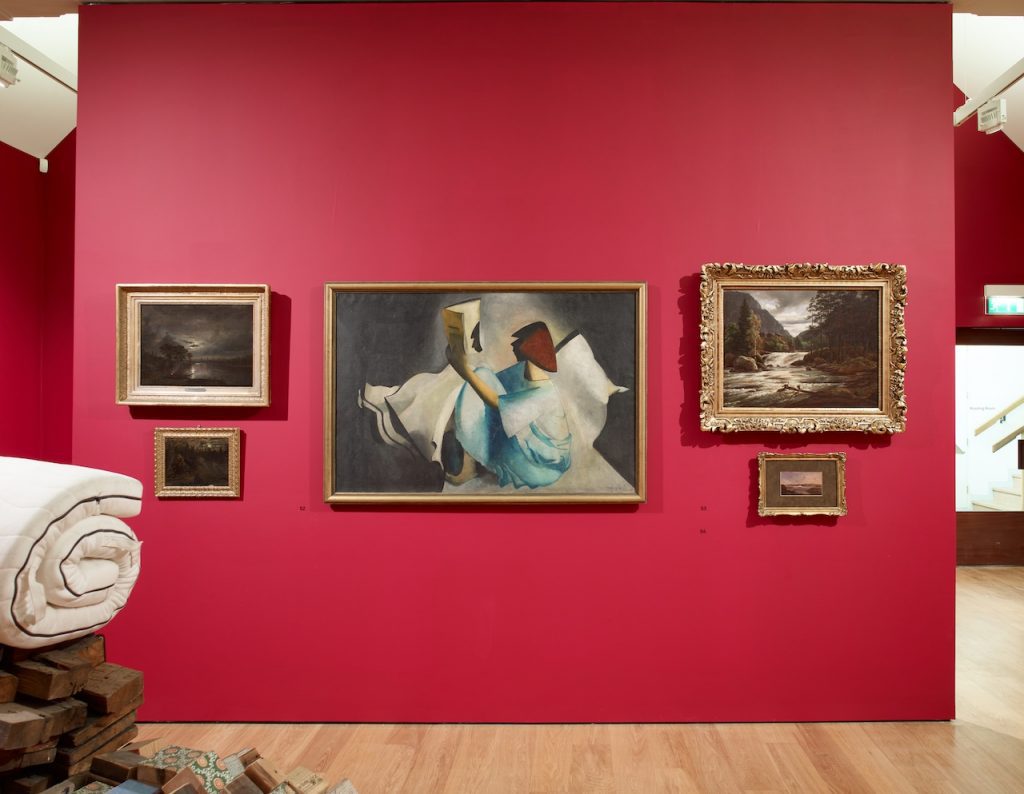 Sveaas refers to Ekblad’s “distinct energetic palette, her fearlessness and her genre-crossing aesthetic repertoire” – all aspects that find their way into her selection of works from his collection. “In this first revelation,” states Sveaas, “Ida Ekblad has identified a theme in my collection of which I was not aware. When seeing art that I connect with, it is initially based on an instant visual and emotional connection. The hidden, the mysterious, the unspoken, the uncanny – are all elements that I am drawn to as artistic qualities, and in this context are also related to the night.”

The unusual cue to the theme is WH Auden’s 1936 poem Night Mail, which begins: “This is the night mail crossing the Border/ Bringing the cheque and postal order/ Letters for the rich, letters for the poor/ The shop at the corner/ the girl next door.” This fragment suggests the universal nature of sending mail, and common feelings about the night time, the hours linked to matters of love, rest, crime, terror and passion, of childhood dreams and adult nightmares. For artists, it has always been an intoxicating subject but one fraught with complications, both in terms of palette and composition. 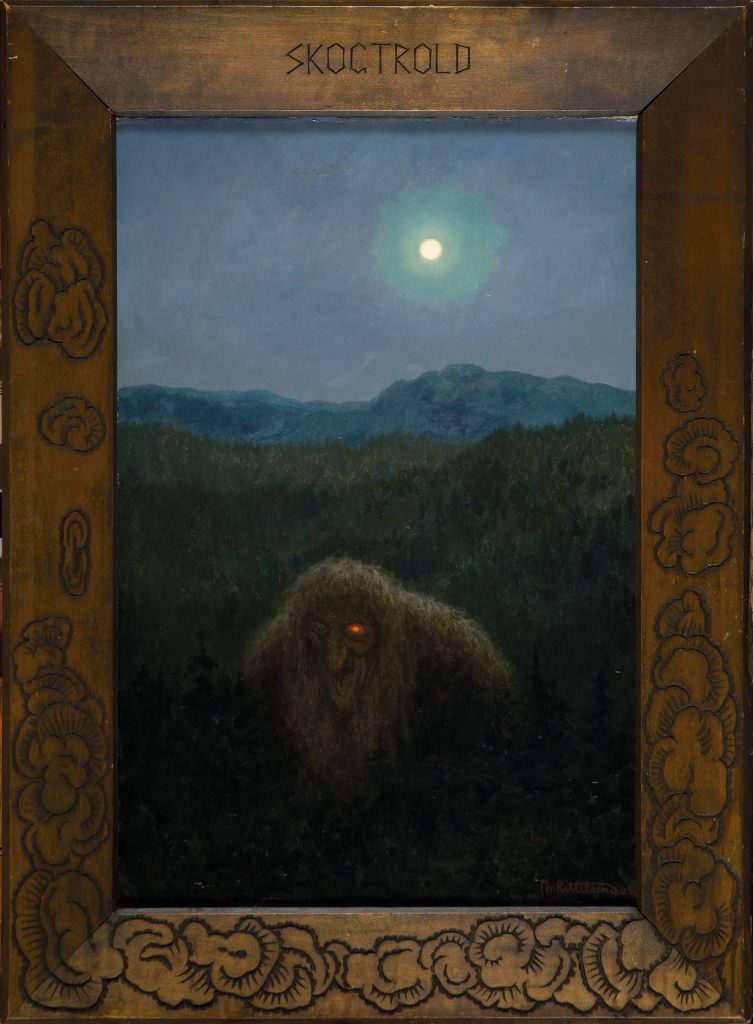 Night is dealt with both literally and obliquely. There are sunsets, full moons, and dark fjords; there are also tranquilisers, butterflies and drunk dogs. And, of course, there is Munch, who is represented by three pictures: a rain-lashed Oslo street scene, a melancholy portrait of a boy in half light, and an eerie forest study of a glow seen through a barcode of tree trunks at dusk. They each, in different ways, deliver a sense of the beautiful menace of Norwegian nights.

This is a significant London showcase for Norwegian artists of the 19th and 20th century, here shown alongside international figures of Modern and Contemporary art, including Louise Bourgeois, Sigmar Polke and Giorgio de Chirico. But many of these Norwegians remain little known outside of Scandinavia. “Aside from Munch, we were aware of Harald Sohlberg and Nikolai Astrup through recent exhibitions in London but many of the Norwegian artists were new to us,” acknowledges Whitechapel curator Candy Stobbs. “We have enjoyed learning about the work of wonderful artists.” Nordic revelations at the Whitchapel Gallery include Cubist forms from Thorvald Hellesen, Theodore Kittelsen’s forest trolls and the melancholy fairy tale portraits of Edvarda Lie. 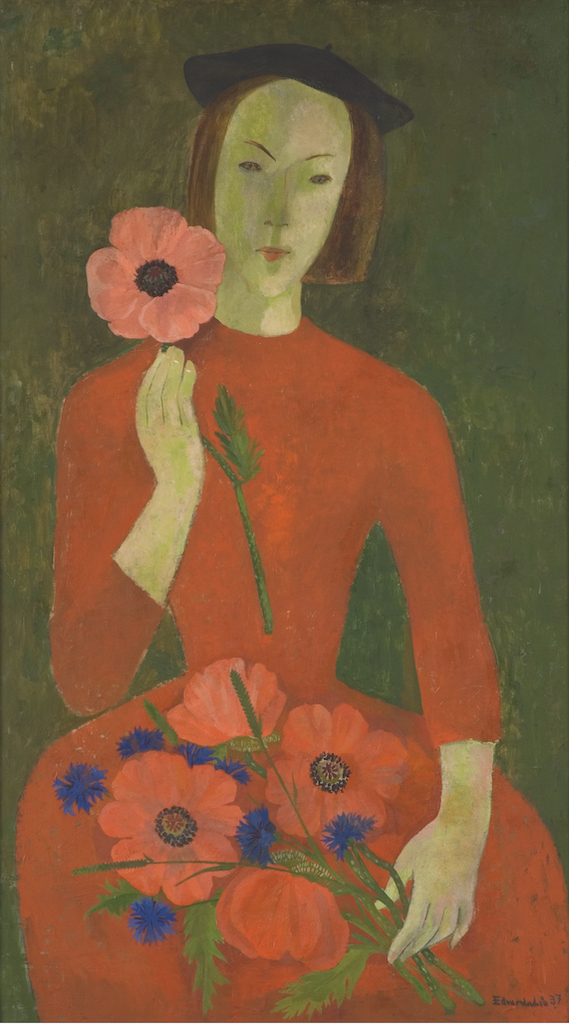 This is the Night Mail is staged in a single gallery, split into three sections, each containing a diverse array of works, from paintings to prints to silver, glass and sculptures. The effect is cumulative: the viewer is – variously – engaged, disconcerted and enamoured by the clashes of methods and motifs.

Landscape is prominent. Norwegian landscape painting is internationally renowned and its key proponents are here, including the 19th-century romantic vistas of Johan Christian Dahl and Adolph Tidemand, and 20th-century masterpieces of mood by Astrup and Sohlberg. More obscure, but no less striking, is the work of Anna-Eva Bergman, whose abstract compositions of moons, boats and mountains from the 1970s shimmer and glow with silver and ocean blues. “I see the whole cosmic riddle through colours and geometry,” Bergman once remarked. 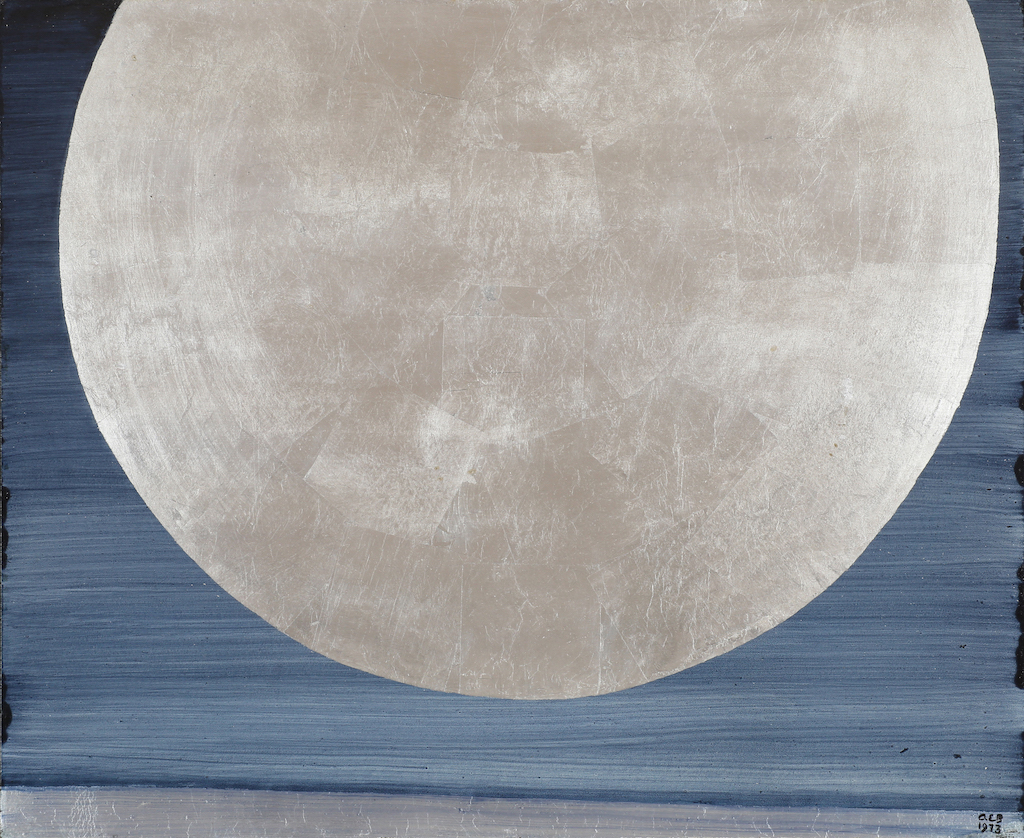 The interiors on view investigate a very different kind of mystery. There is something cinematic in these pictures, a touch of the film noir: a Parisian woman archives boxes up a library ladder in Paulina Olowska’s A la Galcante (2015); a spirited young Norwegian woman lights up a cigarette in a 1912 study in juddering, inky oils by Christian Krohg. These are characters rather than sitters, stories rather than poses. 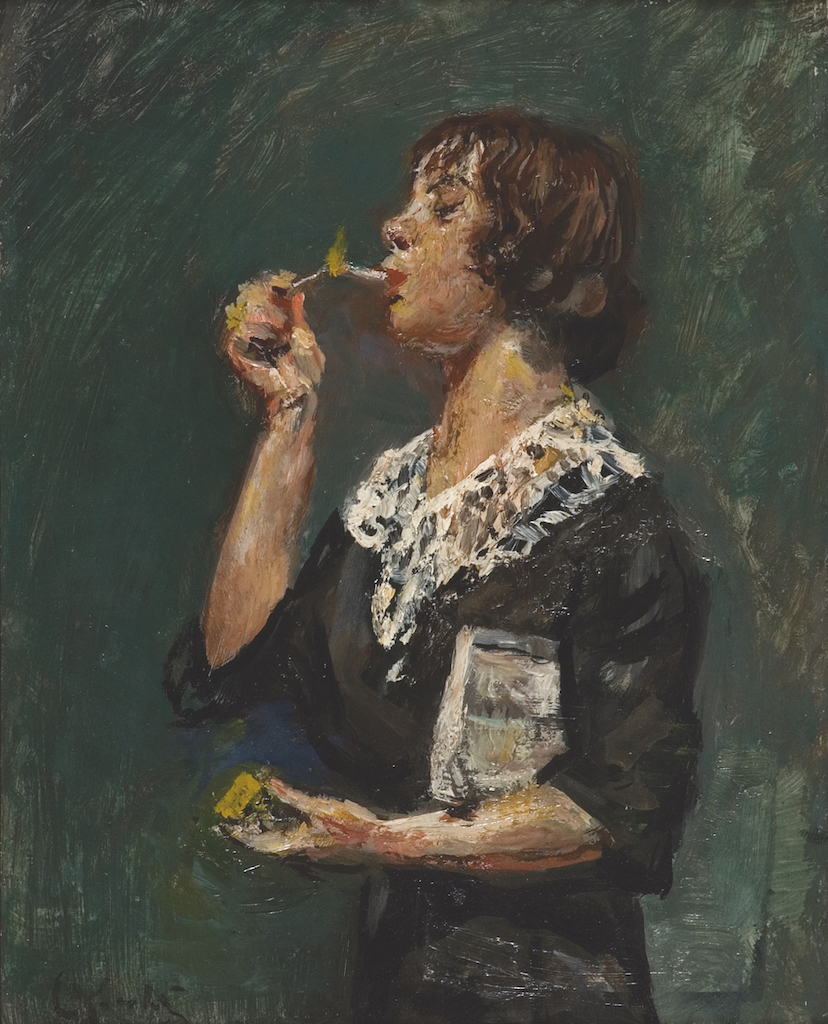 Naturally, reflecting on the long Nordic nights means the exhibition unsettles as much as it comforts. As Christen Sveaas notes: “Not being able to see the full picture stirs our imagination.” Occasionally a picture sits on the border between sinister and cosy: Per Krohg’s painting Natt (1916), of a silhouetted young woman reading a book in a jagged landscape of bedsheets, could have come from the pages of a cautionary folk tale.

Of the international works alongside the Norwegian examples, some – such as an evening interior by Vilhelm Hammershøi, the Danish painter-poet of empty rooms – are natural fits; others, like the mixed-media installations by Isa Genzken (three ominous mannequins in leisurewear) and Theaster Gates (a wooden “migration rickshaw” carrying bundles of bedding) are more curious additions. There is much to ponder in Ekblad’s choices. 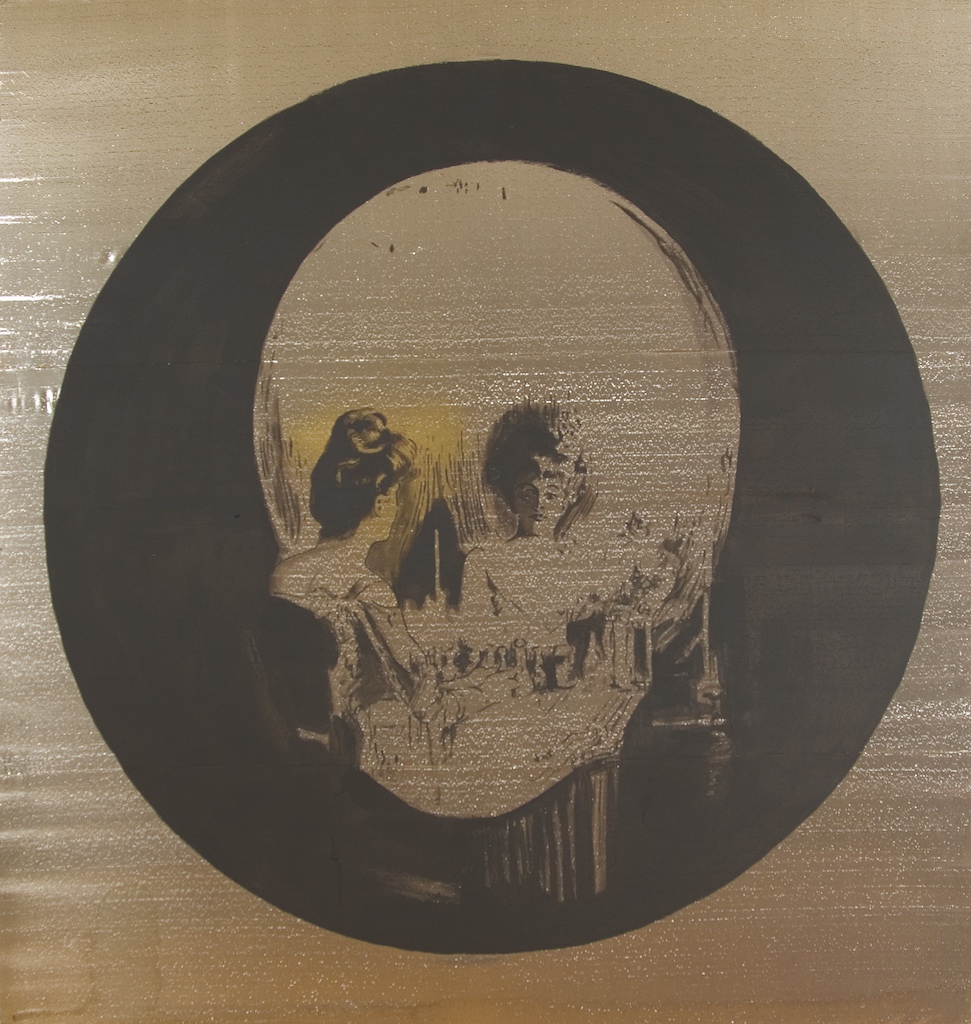 “We were entranced by her combination of historic and contemporary figures,” observes Candy Stobbs, adding that Ekblad’s “selection and layout revealed to us how the representation of night-time went from moonlit nightscapes to the stuff of nightmares and states of mind.” The result is a nocturnal ride worthy of any sleep-deprived master.

Christen Sveaas Art Foundation, This is the Night Mail, selected by Ida Ekblad is on view at The Whitechapel Gallery, London, 28 August 2021 – 2 January 2022

For more information on the Christen Sveaas Art Foundation and the Kistefos Museum visit csk.art

14 October 2021 / Christian House is a freelance arts and books writer for Financial Times, Sotheby's and The Art Newspaper Categories