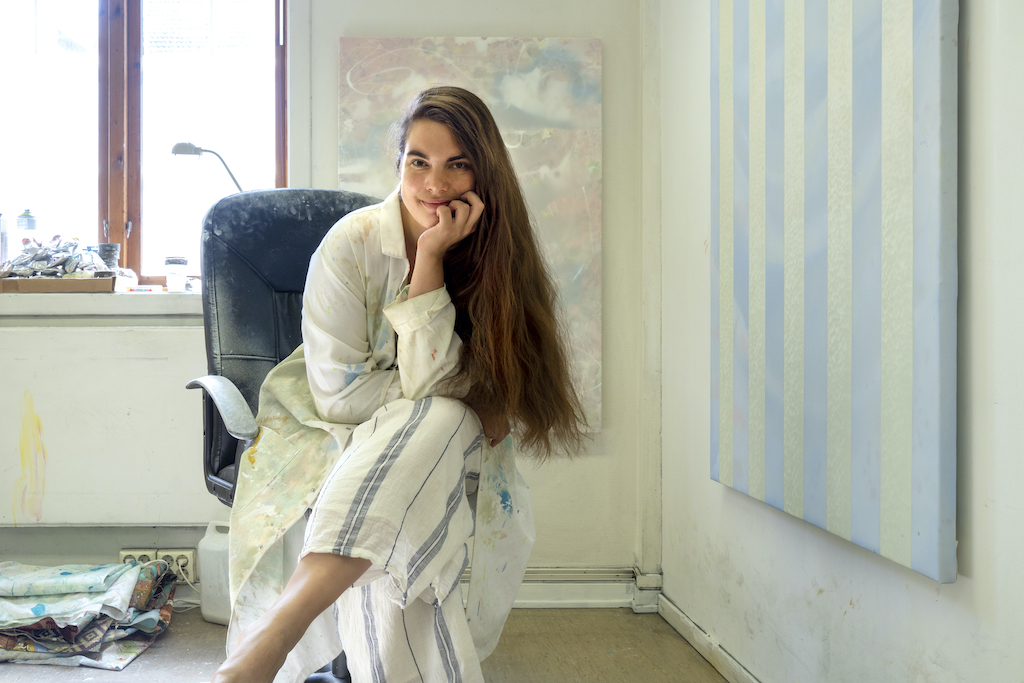 Martine Poppe has lived in London – while retaining a studio in Oslo – since she arrived to study at the Slade School of Fine Art, some 14 years ago. Today, her practice incorporates photography, painting, textiles and sculpture, which she uses – and combines – to explore various colour relations.

Poppe’s new solo exhibition, A Piece of Me, opens at Kristin Hjellegjerde’s London Bridge space on 8 October. With its focus on air and air quality, the show delivers a series of paintings informed by cloudscapes, including an immersive installation that the artist describes as a “cloud museum”. Norwegian Arts spoke to Poppe about autobiographical painting, pale palettes and being inspired by Joni Mitchell.

Can you tell me a little about your practice?

I have never been keen on the idea of a blank canvas. Photography was there before I developed what I now call my practice. My uncle used to be a photographer, and my mum is a photographer too, so I always had access to cameras. I never really felt that a sketch was right for me. If I made a sketch and was happy with it, then it was a drawing, and it was a finished work. My thinking around the development of an artwork is in terms of photography rather than sketching. Once I became a teenager and got access to Photoshop, that became a natural way for me to develop a drawing, rather than using a pencil. 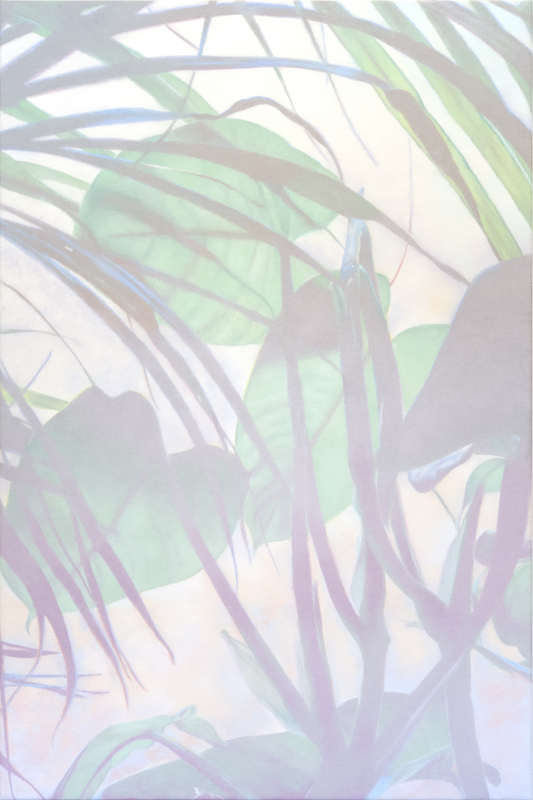 Martine Poppe, Everything is better with a plant, 2021, Oil on polyester restoration fabric, 120 x 80 cm (Photo: Courtesy of the artist/Kristin Hjellegjerde Gallery)

I print out my photograph to exactly the same size as the painting and attach it to my stretcher. I work with abstract photography a lot. It’s more about having a colour relationship I can negotiate. I have never been interested in the idea of replicating the photograph. I put a translucent canvas – usually sailcloth – on top of the stretcher. This polyester restoration fabric is really solid, and I like making objects that have that sense of sturdiness to them, even if they look fragile. It also reminds me of the sailcloth in my dad’s sail-making factory when I was a kid. It has this way of holding light, and it’s very malleable. With a linen canvas, you are only left with the surface, whereas there is a more sculptural element to a translucent material.

Does the photograph remain in the finished work?

No, I remove it towards the end. That’s how my sculptural practice developed – reshaping photographs. The first exhibition I did with them, I folded them all into boats, which I had a lot of fun sitting in, but this evolved into scrunching them up into balls. I was thinking a lot about the value of the photographs, the value of the painting, and the copy and the real, at the time. It felt right to scrunch the photographs up and keep them visible in the space alongside the paintings. 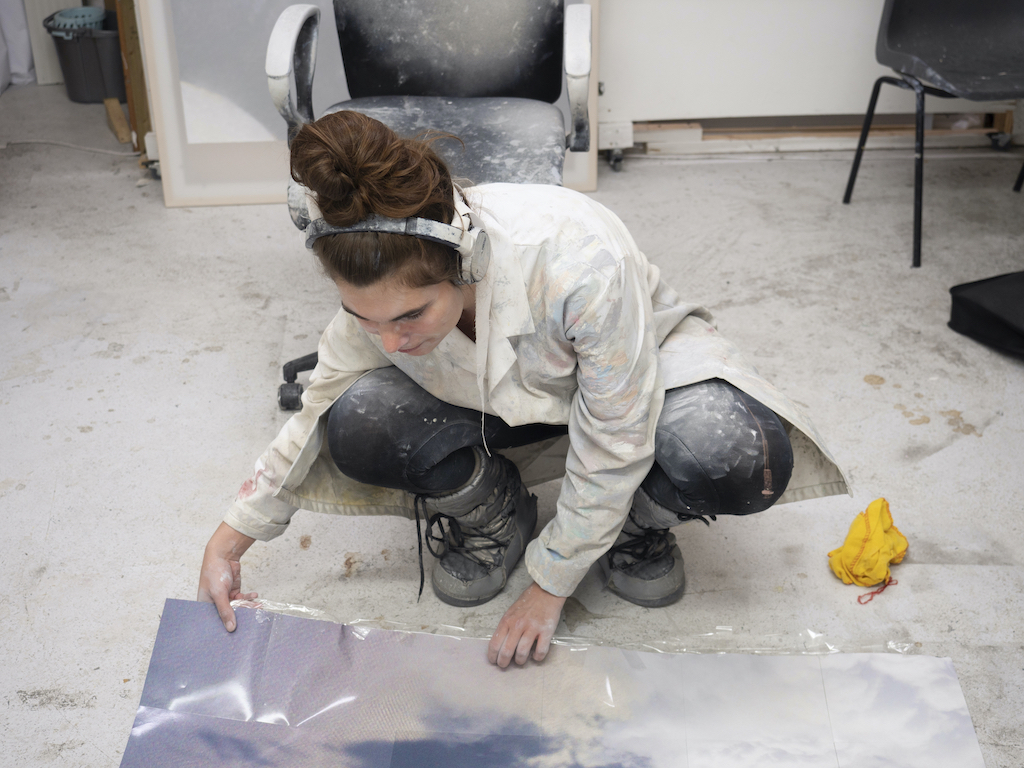 Martine Poppe in her Oslo studio (Photo: Courtesy of the artist/Kristin Hjellegjerde Gallery)

Are the vertical stripes, which are quite a common feature in your work, an inherent part of the fabric?

Sometimes, but other times they are an intervention. They remind me of shutters or bars – again, an element which makes the viewer aware that there is a front and a behind to the work. I never know how to refer to my palette: pale, subtle, vulnerable? But putting that together with the stripes feels quite autobiographical, not in a this-is-me-the-individual way, but this is me as a human being and also as a woman.

I think the best compliment I ever got was from a friend, who has one of my works at home. She told me that she feels recognised by that work and sees in it who she has to be and also all the parts of herself that she has to hide away. I feel things very strongly sometimes, and I want my artworks to make a space for people to think and feel in a less intense way than is usual, especially in a city like London. That is part of the reason why I allow things to be blurred sometimes, too.

You once said that London is “too cramped for me to be interested in it as source material”. What do you mean?

I have a love-hate relationship with London. I have lived here for 14 years now, but I didn’t fall in love with it straight away. I have seasons when I’m really in love, for example I love how the Christmas decorations arrive four months early! I fell in love with the Slade mostly. It felt like my Hogwarts. Even though I’m Norwegian, my art practice isn’t just influenced by the culture I grew up with, but also by the art school I went to, which was very much geared towards experimentation. 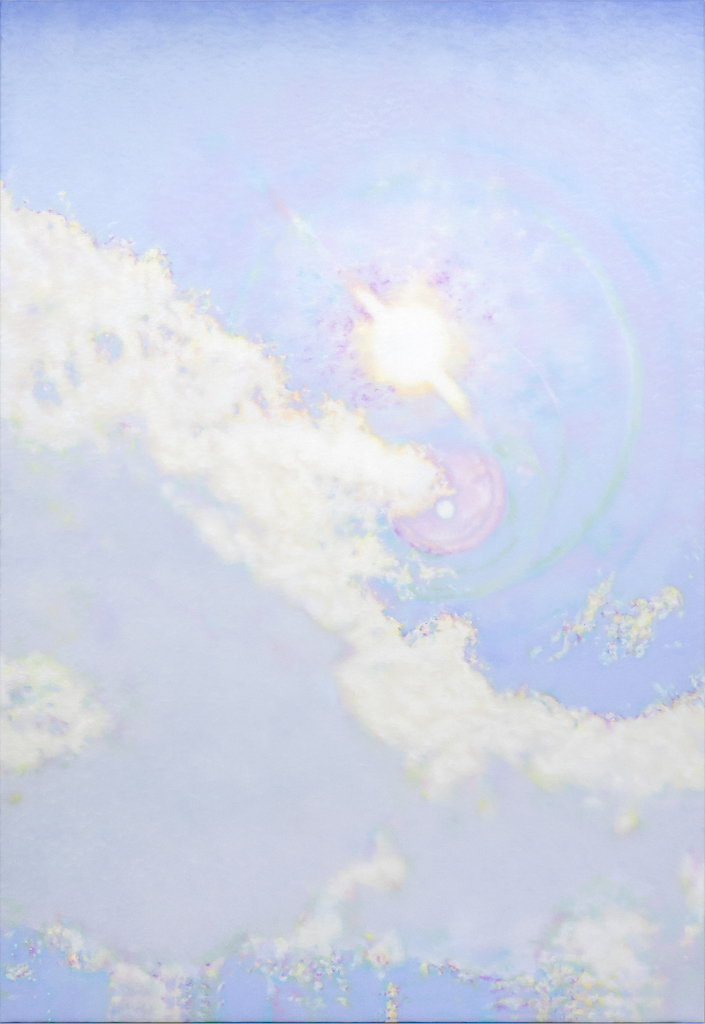 Of course, there are things about Norwegian culture in my practice, too: being so fixated with light is a very Norwegian feature, as is the significance of nature. But I live here because there is a very strong energy in London, and it has this pulse. I love feeling that pulse, but, at the same time, it is a stressful, overpopulated place, with a lot of political problems.

“Being so fixated with light is a very Norwegian feature.”

I spent a whole day in Canary Wharf once, and the tall, grey buildings, and the sheer scale of it, reminded me of what it’s like to be in the middle of really tall mountains. Only, there, the sense of insignificance feels positive – you are minuscule, but part of nature and the greater scheme of things. In Canary Wharf, it feels as if you are just an insignificant, miniscule thing, and it’s awful. I don’t want to be serving up the urban jungle in my work, I want the actual jungle.

Thinking about looking towards the sky leads nicely to your new exhibition, which is largely based on cloudscapes. You have also created an immersive installation which you call a “cloud museum”.

I’ve been taking pictures of the sky for years. I must have more than 20,000 photographs of clouds, and they suddenly seemed relevant to work with. The cloudscapes lent themselves to the way I paint and allowed me to strip it down even more, so it became this really joyous celebration of colour. It felt very liberating. I see a purpose in the cloudscapes that will drive my practice forward, and they also tie in with other things I have been thinking about, such as air and air quality, especially during the pandemic, but also more generally. Everybody can see the sky, but not everyone has access to clouds. For instance, there could be too much pollution. I found out during Covid that I have asthma, so the whole process of breathing has been quite acute for me this past year. The reason why I say “cloud museum” is because I was listening to Joni Mitchell’s song, Big Yellow Taxi, and there’s the line about taking all the trees and putting them in a tree museum. It’s a reference to that. 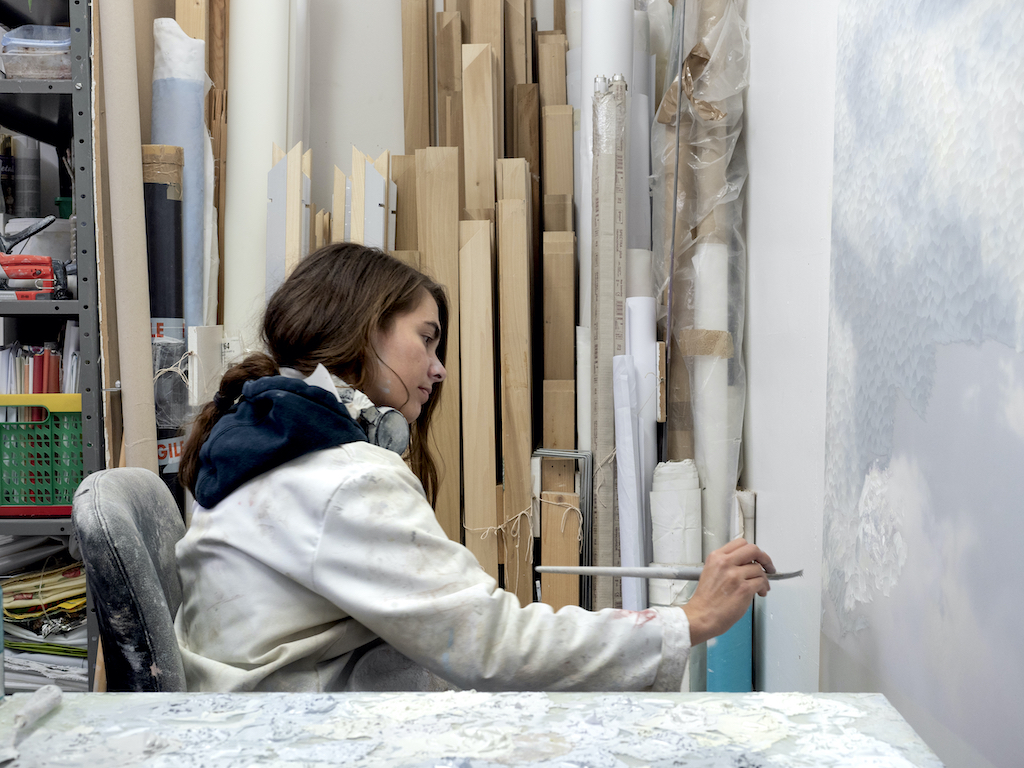 What are the key concerns of your work?

Understanding, recognition, acceptance, space away from the clutter of day-to-day thought processes, time for reflection.

Finally, do you have a few personal Norwegian culture tips?

I think the Astrup Fearnley Museum in Oslo is quite wonderful, and there is the Munch Museum. In London, Scandinavian Kitchen is my absolute favourite grocery store because it has legit Scandinavian food. Most of the products are Swedish, but the cultures are similar, and we eat the same food. That particular shop is great because you can actually go in and taste the different countries.

Martine Poppe, A Piece of Me, is showing at Kristin Hjellegjerde’s London Bridge gallery at 2 Melior Place from 8 October – 6 November 2021.

Have you signed up for the Norwegian Arts newsletter? Subscribe to receive updates on articles and upcoming Norwegian events in the UK.

7 October 2021 / Anna McNay is a freelance art writer, editor and curator. She regularly contributes to a range of art and photography journals, including Studio International, Art Quarterly, The Flux Review, Photomonitor and Elephant magazine. Categories