Right on the Money

One of the first encounters you have with a country is its money, so when the opportunity came up to redesign Norway’s banknotes, Oslo-based design agency Metric Design jumped at the chance. “It’s one of the most well-known forms of design in every country,” explains partner Christian Schnitler. “Everyone uses it, everyone has an opinion about it, and it has a mix of different design elements: design codes, colours, illustrations, typography.”

In a slightly unusual step, the bank decided to combine two of the final submissions to make up a series of notes, already being hailed as a design classic. The winning designs are on show this summer at the London Design Museum as one of the 76 nominees for the eighth annual Design of the Year. It’s an exhibition made from what the Design Museum considers to be ‘the most innova-tive, interesting and forward-looking design projects from around the world.’

Metric Design commissioned illustrator Terje Tønnessen to interpret the bank’s theme of the sea in photorealistic style, capturing the inextricable relationship of Norwegians and the coast in drawings, used on the obverse side of the notes. 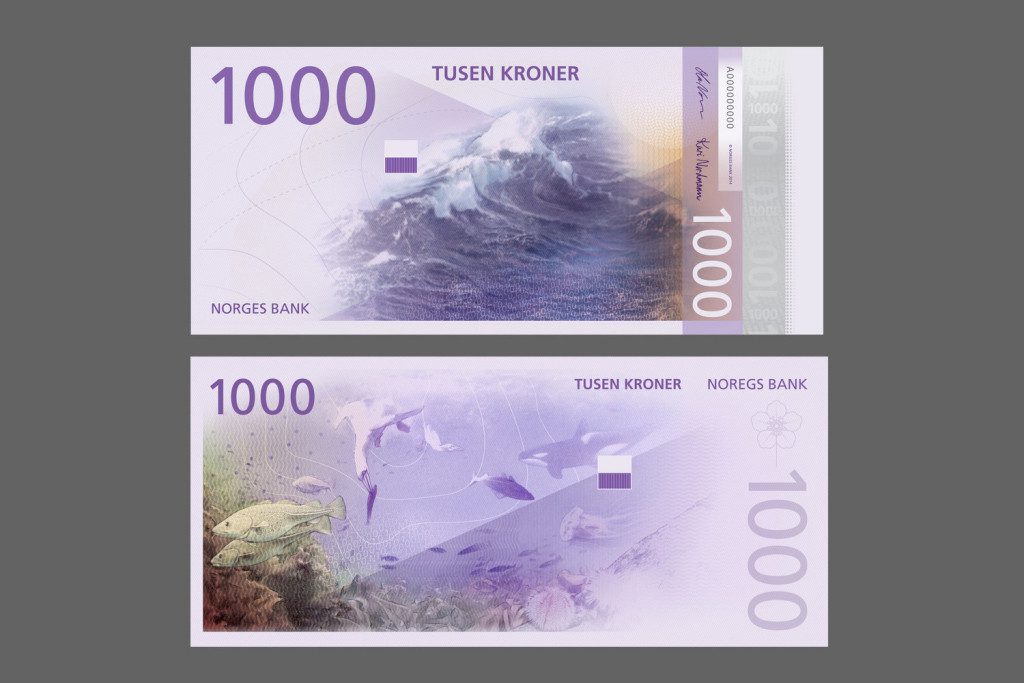 “We decided quite early on that, because people have a well-established and intuitive understanding of the bank note based on a traditional design, we would stay within that classic look,” Schnitler says. “Our biggest problem was to find motifs which were as strong as a portrait. People are used to portraits on the current notes. It’s a captivating image even if you don’t know who the person is. We found motifs we felt were eye-catching and immediately understandable.”

Small details like the use of a different signal flag from the maritime alphabet on each note, make the notes playful and endlessly interesting to examine; put together in a certain order the flags will spell out the letters NORGE, meaning Norway.

The reverse side of the notes features a series of pixel motifs from Snøhetta Design with cubic pat-terns depicting where the sea and land meet, reflecting the communities which thrive on the coast through abstractions of the sea. Each note also follows the Beaufort scale as an expression of wind speed, with a wave design that changes as the denomination of the note rises. On the 50 kroner note the wind is light and so the cubic patterns are short forms, and the waves are long and gentle. On the highest denomination note, representing a strong wind, the rectangular forms are elongated and the waves are short and choppy.

It was the contrast between each side of the notes that led graphic designer Micha Weidmann to nominate the design for inclusion in the Design Museum’s exhibition, saying, ‘It is this combination of a traditional approach, showing various aspects of the sea as well as illustrations of Nordic ships, with modern pixel motifs in a light-wave pattern that makes this design unique, beautiful and rele-vant.’

Schnitler also approves of the combination: “The contrast works really well, because you want to flip it over and each note has an interesting story to tell. The graphics on the reverse side are very representative of the clean precise look of Scandinavian design, and our design on the obverse side captures something of Norwegian tradition and history. Together they work with the theme to repre-sent Norway itself.”

Henrietta Thompson is Editor at Large in Wallpaper* Categories

Tickets are available from maxineweb.net