When the Norwegian pianist Leif Ove Andsnes and the Mahler Chamber Orchestra step on to the stage for this summer’s BBC Proms at the Royal Albert Hall they’ll be marking the end of a four year journey together playing Beethoven’s five Piano Concertos, with Leif Ove taking on the roles of both soloist and conductor, directing the orchestra from the piano. They’ve done this together in 55 cities in 22 countries to great acclaim.

They’ll be arriving in London directly from Bodø, a Norwegian city north of the Arctic Circle which boasts a brand new concert Hall, Stormen, a thriving arts and festival scene, tantalizing views of the Lofoten Islands and  lungs full of clean, fresh air.  But  the Proms, with concerts every day from mid July to the famous ‘Last Night’  in mid September, is a hot ticket welcoming soloists and orchestras from all over the world to play in this London landmark, with an audience unlike any other. The ‘Promenaders’ stand in the arena, those lucky enough to be near the front almost close enough to touch the performers. Walking out on to the stage is a memorable moment for any artist, with the loudest of welcomes and the quietest, most intent listening during the music.

Leif Ove has been a regular visitor to the Proms since 1992, the Bergen Philharmonic Orchestra have become familiar faces (returning to the Proms this year too), the Norwegian Chamber Orchestra has flown the flag for Norway as has the Oslo Philharmonic Orchestra. Grieg, of course, has a special place in the hearts of audiences: the full scale performance of Peer Gynt in 2001 featuring the celebrated Norwegian actress Wenche Foss just one of the memorable Proms concerts.

Grieg has played an important part in Leif Ove’s career, but this summer he’s keen to share his passion for Beethoven and the very special relationship he has built with the Mahler Chamber Orchestra. It wasn’t love at first sight for Leif Ove and Beethoven, though the composer was “impossible to ignore”, but when he was organizing a series of concerts in Norway in the 1990s something struck him: “ Beethoven speaks with an unvarnished directness and sincerity that goes straight from the heart to the heart. The slow movements achieve an extraordinary level of spiritual intensity”. The  idea to work on the Piano Concertos in this way, directing the orchestra from the piano, came to Leif Ove in a lift in Sao Paulo. Clearly this was a lift with an elevated taste in music as it was playing the first two Piano Concertos on a loop. Beethoven’s originality and exuberance struck Leif Ove and he made up his mind to devote extensive time to his music.

When we hear the concertos at the Proms we’ll witness the result of a close relationship between the soloist and conductor, and the orchestra, musicians who now know each other so well that  they’re no longer relying on every gesture, they have a deep understanding of each other  and are, by now, enjoying the freedom this gives them in expression and spontaneity. Beethoven after all is not a ‘cosy’ composer and his music is not for polite chamber music circles. It’s edgy, not afraid to confront, full of energy, of joy and sorrow. A visit to the Beethoven house in Bonn added food for thought for Leif Ove, especially with the opportunity to try out Beethoven’s own pianos. 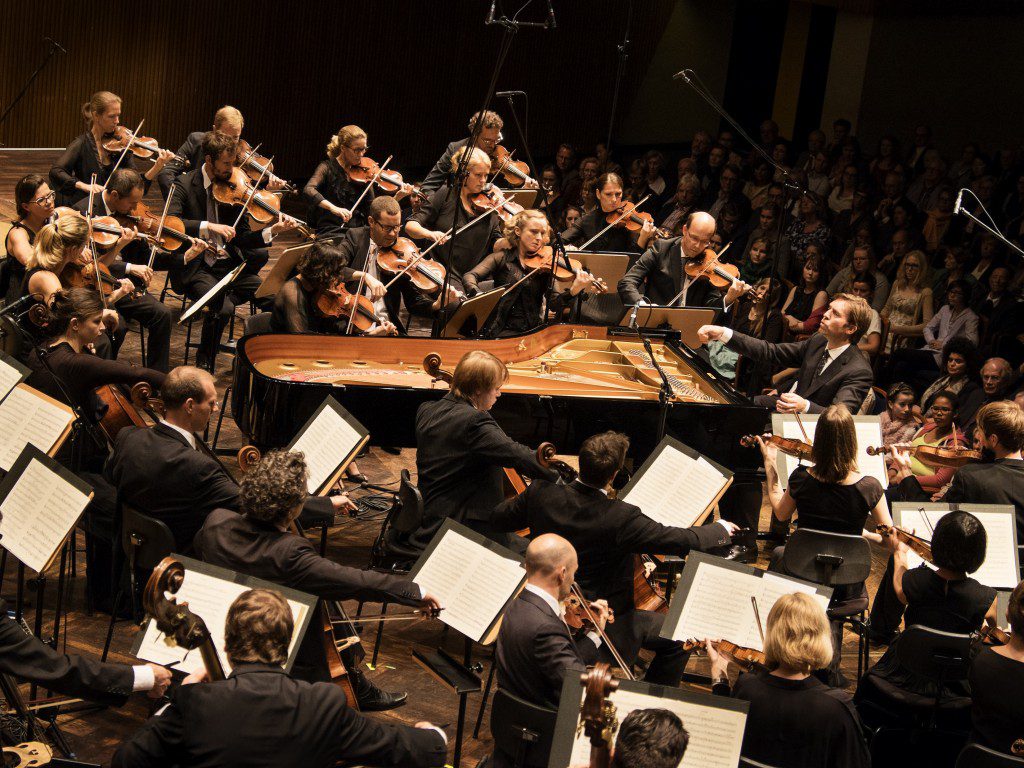 There have been memorable performances over the four years, but perhaps no more so than in Leif Ove’s home city of Bergen. His twins had been born 12 weeks early and he had had to miss out on some performances, but when the Bergen concerts happened  Leif Ove was back on stage finding that all his  emotions  came spilling out at the end of the Fourth Concerto whose “bracing affirmation of life inspired tears of joy”.

Bergen’s own orchestra, the Bergen Philharmonic Orchestra, appear at the Proms later in the season (27th August) a fine way to mark their 250th anniversary. Their Chief Conductor and Music Director, Andrew Litton, will hand over the reins to Edward Gardner this October, but his time in Bergen has been notable for an increase in the orchestra’s international profile, a busy touring schedule and a number of new commissions. Bergen has a vibrant and innovative cultural life across the arts, perhaps inspiring a piece called Bergen’s Bonfire by the Russian-British composer Alissa Firsova which has its world premiere at the Proms. They’ll also bring with them music by the young Norwegian composer Ørjan Matre, Mendelssohn’s Violin Concerto featuring Alina Ibragimova as soloist, and a work always designed to lift that famous Royal Albert Hall roof, Stravinsky’s the Rite of Spring.

By then Leif Ove Andsnes may be enjoying a well earned rest but not before we experience this very special approach to Beethoven: “I adore the special atmosphere generated by Proms audiences and I imagine there will be quite a celebration afterwards to mark the end of what has been an extraordinary pilgrimage for me and the orchestra”.

Leif Ove Andsnes and the Mahler Chamber Orchestra perform at the BBC Proms on 23, 24, 26 July 2015.
The Bergen Philharmonic Orchestra and Andrew Litton perform on 27 August 2015.

20 July 2015 | Fiona Talkington is a presenter for BBC Radio 3 who has presented the Proms live on radio for over 20 years, as well as the award winning programme ‘Late Junction’. She is a regular visitor to Norway and works with a number of Norwegian venues and festivals. Top photo: Chris Aadland Categories