A Decade of Eyes as Big as Plates 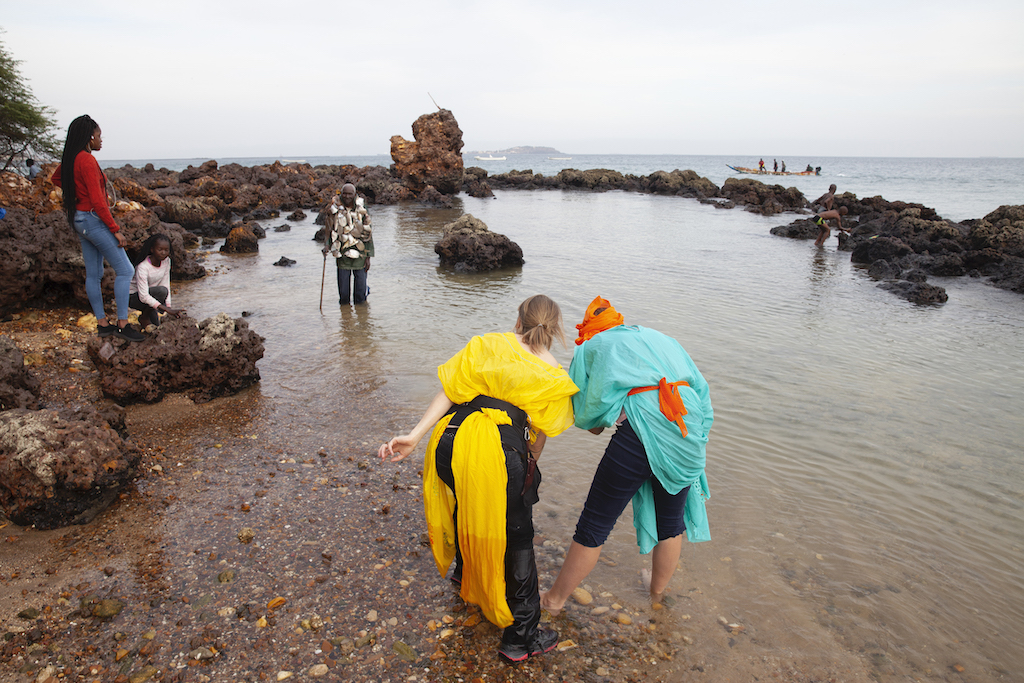 With a new book and works included in a Barbican exhibition, photographers Karoline Hjorth and Riitta Ikonen are engaging ecologically-minded audiences with their enigmatic shots of elderly figures immersed in the natural world.

“Armed with binoculars, camera gear, sculpture bases, cinnamon buns, two beers and tinned mackerel, we drove hundreds of kilometres in our trusty rent-a-wreck,” recall photographers Karoline Hjorth and Riitta Ikonen about touring northern Norway in search of figures to snap swathed in the tangled embrace of nature. Over the past decade, the Norwegian-Finnish duo have taken en plein air photography to windswept heights. 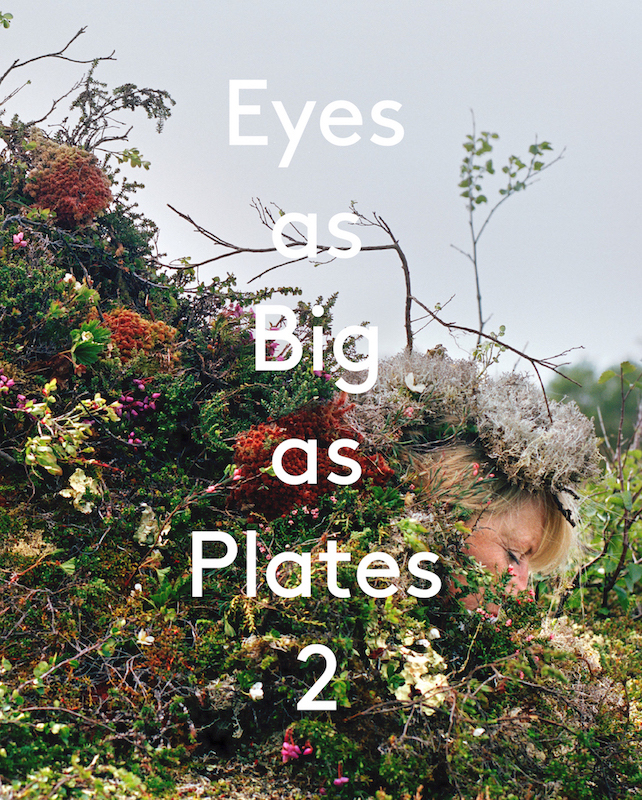 Talking at the London launch of their photobook Eyes as Big as Plates 2, the pair explain their environmental mission. Their practice is playful. First, they find an elderly, curious model willing to discuss the flora, fauna and topography that moves them. With this information in mind, they create sculptural sets or costumes – garlands of shells and seaweed, capes of rowan berries – into which the sitter disappears. A suitable location is chosen and – with wellingtons and waterproofs to hand – only then does a camera get involved. It is an exercise in serendipity in which satnav and sturdy footwear are crucial.

Their first volume was published in 2017 and focused primarily on people and places within the Nordic countries. They borrowed their title from The Three Billy Goats Gruff, the famous 19th-century tale by Norwegian folklorists Peter Christen Asbjørnsen and Jørgen Moe, in which a troll living under a bridge has “eyes as big as tin plates”. The artists recall how the title “seemed to fittingly describe many of our model’s way of looking at the world.” 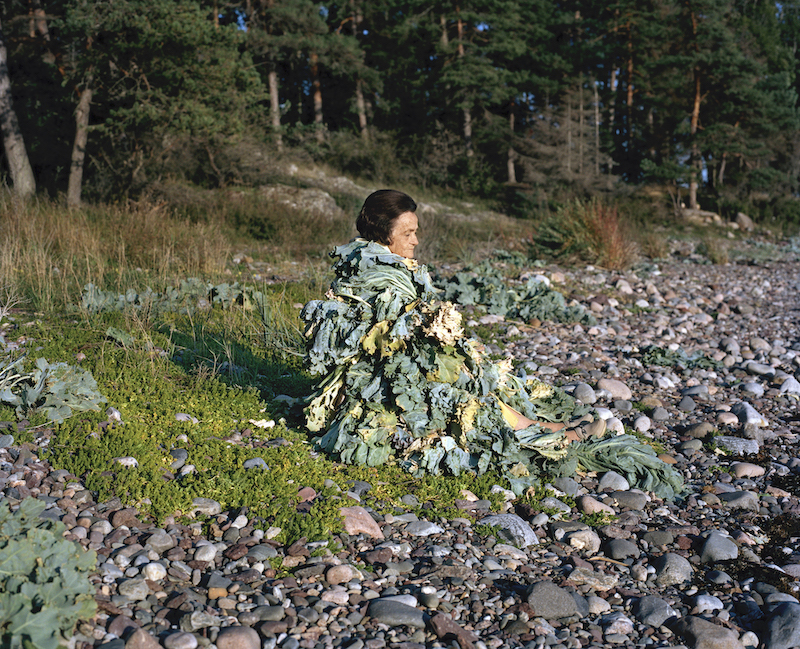 Initially, they were interested in the personification of Nordic folklore. Hjorth recalls how her grandmother, who grew up on a Norwegian farm, would not pour boiling water on the ground “because it would disturb the people in the ground.” While, in Iceland, Ikonen tells me, roads would be moved because “enough locals believe that someone lives in a rock.” Although, they note, pragmatism often overrides tradition: stories are luxuries for those living in nature’s extremities.

As the project progressed their quest turned into a search for modern humanity’s place within nature. Eyes as Big as Plates 2 features 50 new portraits, created over the last four years, each illustrated with explanations on how the person links to the landscape. Locations vary from South Korea, Tasmania and Senegal to more northern climes, such as the Outer Hebrides, Iceland and obscure corners of the Norwegian countryside. “We really don’t enjoy the borders and barriers and boxes when it comes to countries,” Ikonen says.

Their models – or rather collaborators – are equally diverse: wrestling coaches, housewives, hunters, fishermen, reindeer herders, Aboriginal Uncles, kantele players, village chiefs and surfers. These spirited sitters are framed in bull kelp, ferns and puff-ball mushrooms, punctuated by reeds and branches and carpeted in clay and waterweed (their cover-girl, Eli, is pictured enveloped in the lichen and Alpine flowers of the Finnmark mountains).

Both photographers have their own separate careers: in 2022, Hjorth, a Norwegian who trained in London, was recently appointed artistic director of Fotografihuset, a photography centre next to the Oslo Fjord, while Ikonen, a Finn, works between London and New York. They met, however, in a virtual landscape. “We just bumped into each other on the internet,” Ikonen laughs. A mutual interest in nature and the lives of the elderly grew into an idea for a series. Hjorth recalls how, in 2011, they decided to share a tiny little flat on the west coast of Norway to pursue the concept. “We had no idea if we were even going to get along.” Today, they finish each-others’ sentences. 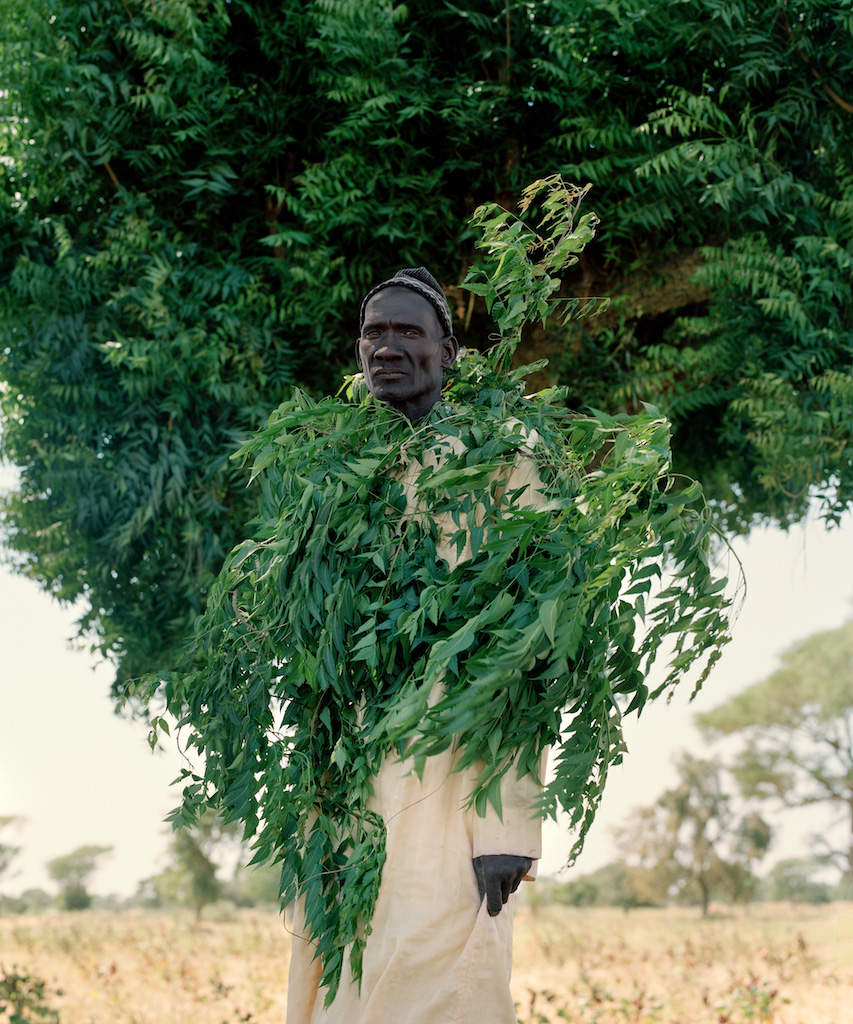 Their photographs follow in a Nordic tradition of folk art, particularly the pictures of fin-de-siecle painters such as Theodor Kittelsen and Gerhard Munthe. But their work remains contemporary in style and international in scope. It has proved a timely tack: the new Barbican exhibition Our Time on Earth, featuring works from Eyes as Big of Plates alongside video pieces and installations by other artists, encourages communities to look at the natural world in new ways.

‘While mingling with Manhattan gardeners they discovered Bob, a veteran of the city’s fashion world, who allowed himself to be shot encased in a carefully-coiffed coat and cap of pine needles amongst the trees of Forest Park, Queens’

With the climate crisis reaching fever pitch, Hjorth and Ikonen suggest that part of the solution lies in not seeing humanity as separate from nature but as part of its fabric. The Barbican exhibition, which explores the tentative balancing act performed by the planet’s various species, emphasises the power of “equal-diversity” rather than “ego-diversity”. In this regard, Ikonen notes, we should be grateful to “our indigenous brothers and sisters for having shown us the way.”

Inclusivity, both human and environmental, underpins their approach. “This is not taking a picture, it’s making one together,” explains Hjorth. The otherness of old age is diluted by an element of childlike performance in the shoots. There are, Ikonen explains, four players in the process: “Us and the person and the weather and the landscape.” Hjorth suggests that in future they could caption their compositions with meteorological details: “cloudy and a little bit of mist” or “in tense north wind”.

Some of their participants are found through open calls published in local newspapers and others by chance. “In New York we went to the Indoor Gardening Society and just infiltrated the meeting and looked around a little bit,” Hjorth says. An interesting figure with the right “vibe” gets buttonholed. While mingling with Manhattan gardeners they discovered Bob, a veteran of the city’s fashion world, who allowed himself to be shot encased in a carefully-coiffed coat and cap of pine needles amongst the trees of Forest Park, Queens. “It turned me into another person I didn’t know existed,” Bob noted. 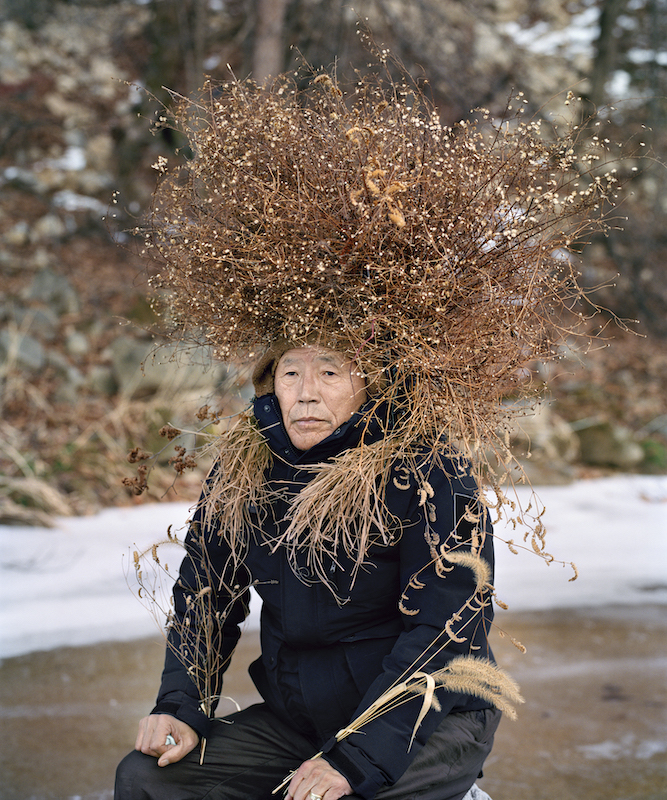 Ten years ago, before they had a body of work to illustrate their vision, sourcing sitters was more problematic. “We approached a gentleman on a pier in Norway at the beginning of the project. We were being very friendly. He looked a little distant, a little cold,” Ikonen recalls. “He told us afterwards that he thought we were Jehovah’s Witnesses.”

In their new book, “field notes” detail the extraordinary lengths to which the pair go to achieve such atmospheric pictures: skinning reindeer the Sámi way, chasing lost luggage in Stornaway, shooting from upturned buckets and tree stumps in forests and lakes. And they seem to be set for another decade of adventures. Hjorth and Ikonen are photographers who have morphed into make-up artists, costumiers, weather forecasters and location scouts. But, they insist, it’s worth all the long hikes and cold, wet weather to promote a “more-than-human world.”

31 May 2022 / Christian House is a freelance arts and books writer for Financial Times, Sotheby's and The Art Newspaper. Categories