Kåre Conradi is both an actor and the artistic director of the Norwegian Ibsen Company. Conradi has starred in numerous Ibsen productions, and is now starring in a new co-production with Print Room theatre of Henrik Ibsen’s classic The Lady from the Sea.

Since Conradi debuted as an actor in 1989, he has played many different roles both in theatre and on screen. He is known by many as Orm in Netflix’s Norsemen, but Conradi is also one of Norway’s leading actors on Ibsen. In 2010, he decided to establish a Norwegian Ibsen Company to bring Ibsen’s work to audiences in Norway and abroad.

Conradi last appeared at The Print Room in the critically acclaimed production of Little Eyolf, and is now set to play the role of Arnholm in The Lady from the Sea. The Stage writes that the play is a “beautifully conceived bilingual update of Ibsen’s drama about loss and longing.” We spoke to him about what makes The Lady from the Sea special, Ibsen’s relevance in modern times, and doing theatre productions in the UK. 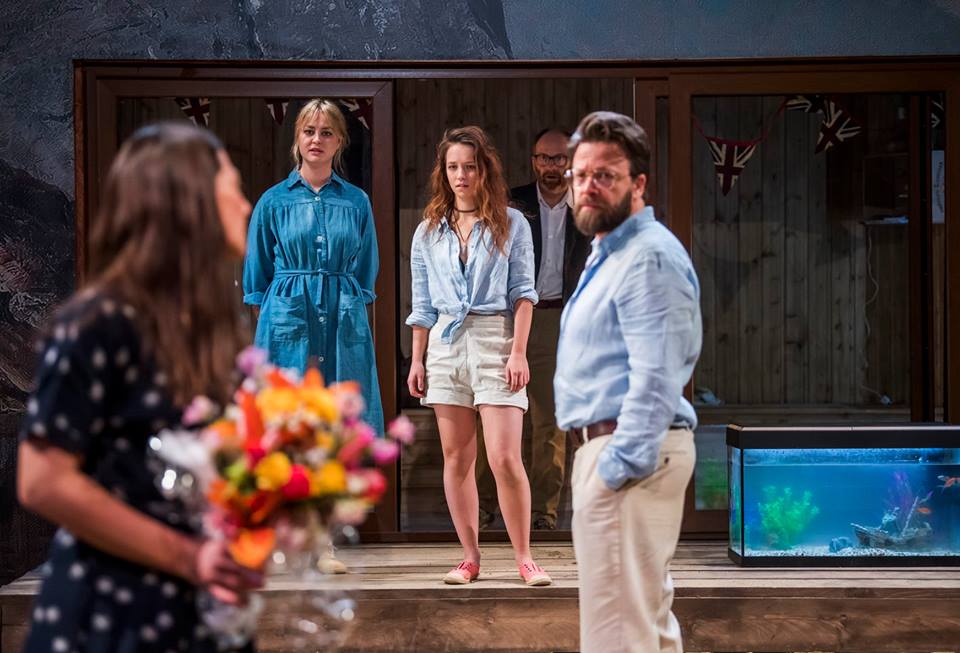 The Lady from the Sea is The Norwegian Ibsen Company’s first big production. Can you tell us more about the company and your collaboration with Print Room?

We are very happy to be working with the Print Room and the team there lead by Anda Winters. Anda and I met some years ago when I was looking for a kindred spirit in my pursuit to do more Ibsen over here in the UK, as well as around the world. We almost immediately agreed on making a full production together. I also started discussions with the artistic team at The National Theatre of Norway, where I am based. I suggested we visit London for some days with the production of Ibsen’s Little Eyolf that Pia Tjelta and I were still performing in Oslo. The response for both productions has been tremendous, and especially the joy of now seeing the bilingual take on Ibsen in The Lady from the Sea is received so well.

My idea of creating a Norwegian Ibsen Company came from the inspiration of seeing how Shakespeare Companies like The Royal Shakespeare Company and Shakespeare’s Globe take such good care of the heritage of the world’s greatest playwright. They manage to do this on so many levels from a wide spectre of performances, to working towards youth and education. Henrik Ibsen is the most performed playwright in the world after William Shakespeare and the impact he has all around the world is tremendous. Yet we didn’t have our own Norwegian Ibsen Company, wanting to create even more possibilities and collaborations. I decided in 2012 that I would slowly build one. I started in Edinburgh at the Fringe festival, playing for just one person in the audience in the beginning. Now for The Lady from the Sea we experience full house and I have a wonderful team of actors, creatives and stage-team with me from Norway. 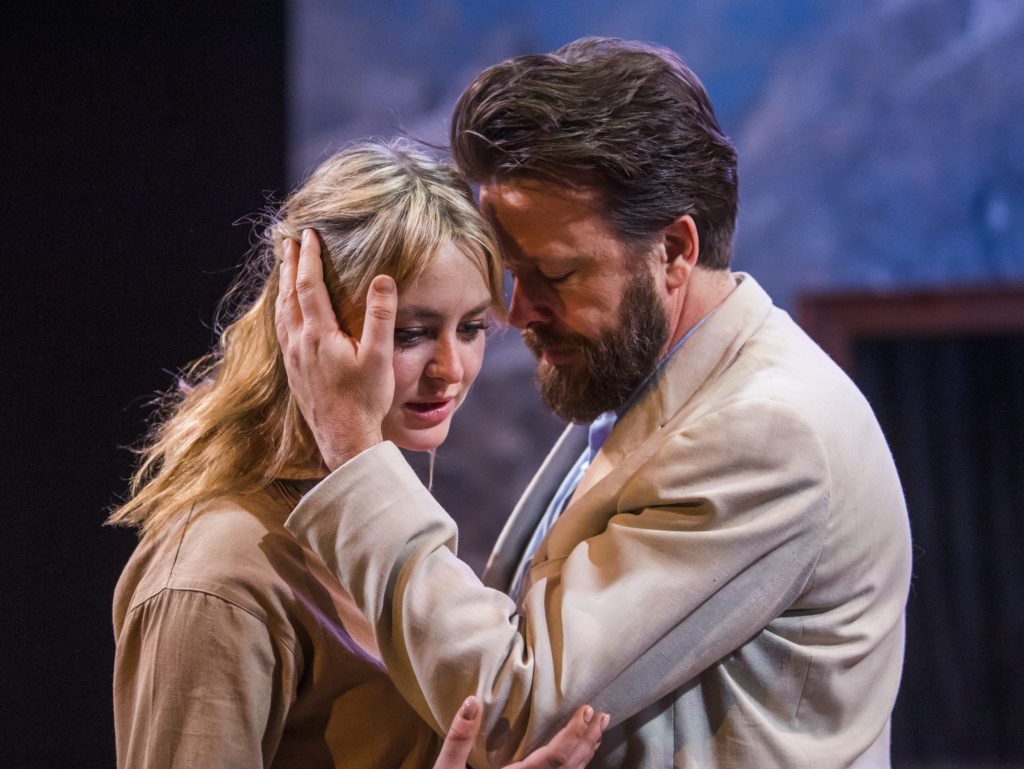 Kåre Conradi (Arnholm) and Marina Bye (Bolette) in The Lady from the Sea. Photo: Tristram Kenton.

You have worked on numerous Ibsen productions in the past. Why have you chosen The Lady from the Sea, and what makes this play special?

Firstly, this was a play that both Anda Winters, the director Marit Moum Aune and I loved. It has so many layers of human yearning, longings, strength and weakness, and it is a thrill to explore and present this. Secondly, it is the play’s 130th Anniversary; it opened in Norway and Germany on the 12th of February 1889. I have also recently discovered that the actor that Henrik Ibsen chose to play the role I play, Arnholm, is related to me. The day I discovered that was a wonderful and surreal day. Last, but not least: The play presents an almost natural solution to why our version can be bilingual. Ellida feels estranged to her husband and his children from his first marriage. We made him and the daughters English.

The Lady from the Sea was performed for the first time 130 years ago. What makes the play, and Ibsen’s work in general, relevant in modern times?

Henrik Ibsen said that if you want to get to know me you must read my plays. He searched deep inside and gave so much of himself in every play that he has given us a true gift of human insight. Yes, the language sometimes needs to be tweaked and relationships explored, but my aim with the Ibsen Company is to be as true as possible to Ibsen’s intentions and stories. He has this rare gift of seeing us as we are, with all our strengths and weaknesses, and with all our shortcomings. He was able to see us as human beings, more than we sometimes manage to see ourselves, or want to see. He reveals all the secrets we hide from each other, and more importantly: from ourselves. This makes the essence of all his plays so incredibly relevant. His plays are about longing, loss, lust and all that makes us human. 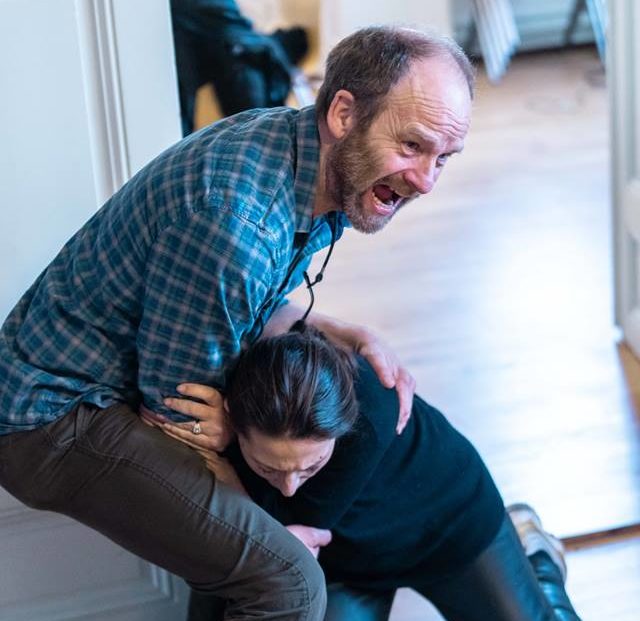 You and the rest of the team were recently rehearsing in Ibsen’s apartment in Oslo. How did it inspire the creative process?

We feel it somehow brought us all a tad closer to Ibsen. And it gave us a good focus. The apartment is an apartment that I rediscovered and have engaged myself in. And I have been fortunate enough to be able to rent and use the apartment on different occasions. This is the flat where Ibsen wrote Little Eyolf and The Master Builder. His small study was also used as a studio for most of the famous portraits of him. Ibsen sat there modelling for many of the famous paintings we know of him, and he even modelled for the famous statue of him outside The National Theatre of Norway. The Norwegian Ibsen Company want to work so this flat is not forgotten, and we are trying to find a way to rent it for good. It has an incredible history. And just around the corner lies the Ibsen museum where Ibsen’s last flat is intact and restored. An actor called Knut Wigert begun that particular process many years ago and I cannot see why we shouldn’t manage to do the same with the other flat.

As an example: In Stratford the audience rush to an empty spot “New Place” where Shakespeare’s house once was. We still have Ibsen’s flat and we need to keep it. It’s on the foundation of our history that the future is built, Ibsen once wrote.

The actors from both countries have embraced this without many questions, and it feels inspiring on both sides they say. Our dramaturg Mari Kjeldstadli and our director Marit Moum Aune have both done a wonderful job in selecting the excerpts so that they seem natural. The translation is very good too.

Naturally, it takes effort for the English actors to learn the lines in Norwegian and to know the other actors’ lines well so they can react as if they understand everything. But it also adds a different concentration and presence. Both the wonderful actors and the audience from the UK have expressed that they like having Ibsen’s original words presented to them throughout the play. 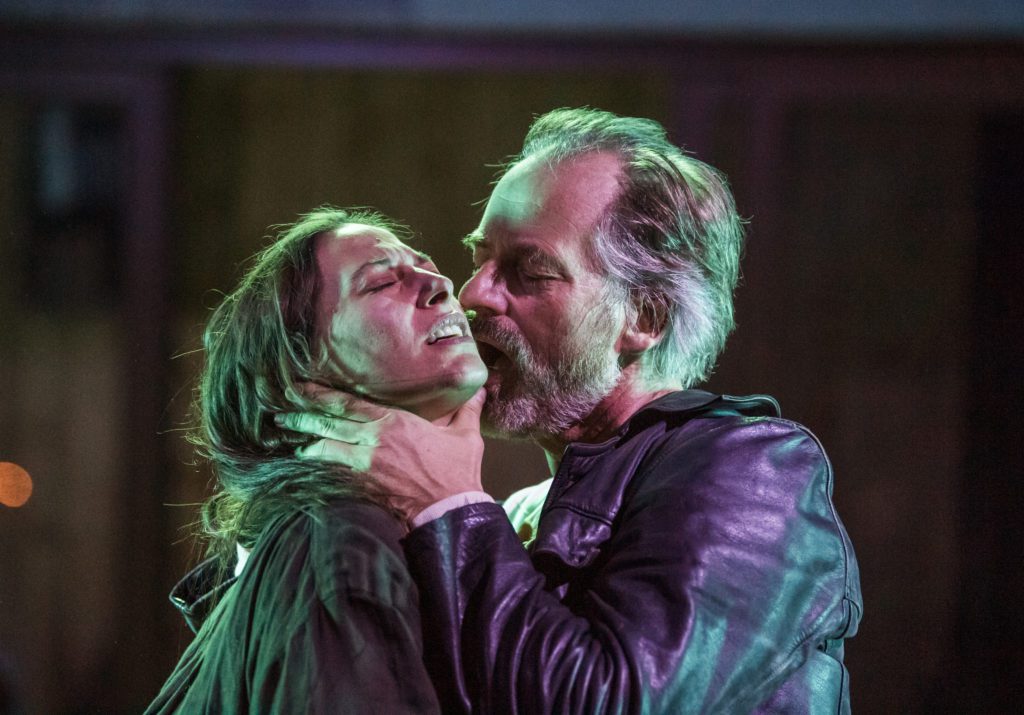 Pia Tjelta (Ellida) and Øystein Røger (The Stranger) in The Lady from the Sea. Photo: Tristram Kenton.

In extension to this: How does this influence how the characters interplay? What does the different languages add to the play?

We have worked on translating even more during rehearsals, to make all scenes as clear as possible. The translation by May Brit Akerli was very good and during rehearsals we also tweaked more for precision. It gives us an extra round of working with the text compared to in other productions where one works in one language, and it forces us all to know exactly what we mean when on stage. This search for truth is something that Marit Moum Aune, our director, also focuses on in all of her work. 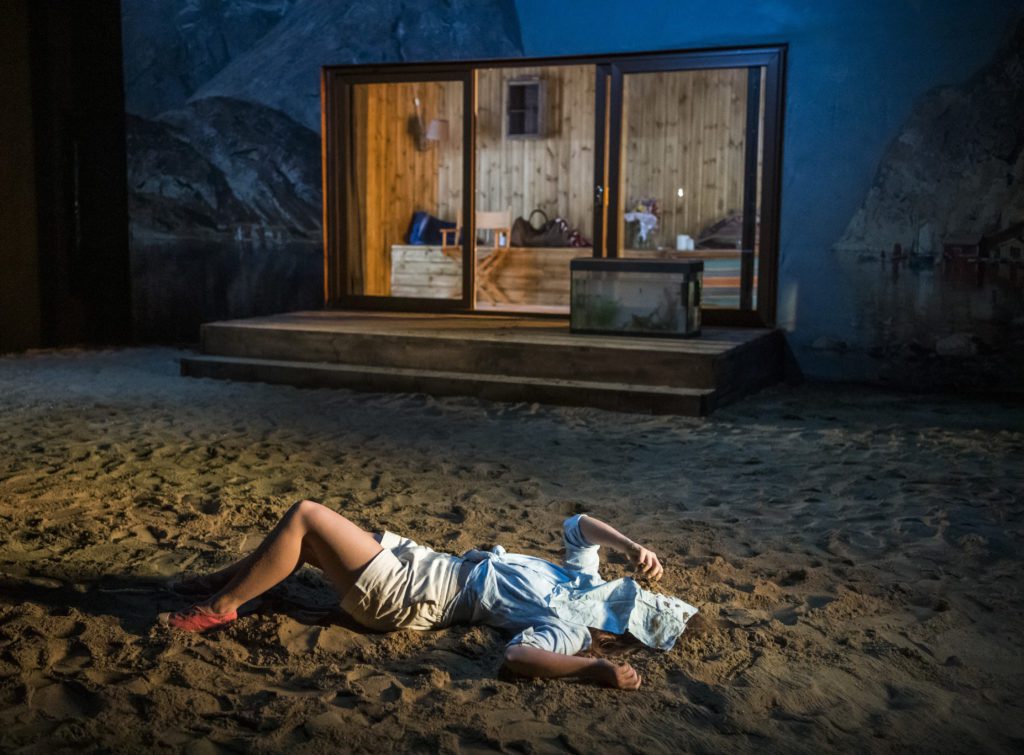 Molly Windsor (Hilde) in The Lady from the Sea. Photo: Tristram Kenton.

In your experience, what has it been like doing theatre productions in the UK?

I love working here. I also always love to be inspired by actors and creatives from all over the world. The respect in the UK for the written word and the theatre’s base in pure storytelling is inspiring. I truly enjoy being in performances where a director decides to twist everything around, take away text and add completely new layers. As a way to move art and ourselves forward this is not just enjoyable, but very important and vital. On the other hand, I also have a niece who at the age of twenty-three has never seen a play by Ibsen told through the story that Ibsen originally wrote. I therefore also feel there is a responsibility to tell these originals with conviction.

This too, I find to be both brave and modern in 2019. In general, I believe that as Norwegians we can take the chance to be even more brave and proud of Henrik Ibsen and his legacy. The idea of The Norwegian Ibsen Company is to explore more, together with creative forces and Ibsen enthusiasts from all over the world.

Kåre Conradi and The Norwegian Ibsen Company’s collaboration with Print Room The Lady from the Sea will play at Print Room at the Coronet from February 8 to March 9. Tickets here.