The Women of Rosmersholm: Ibsen and Emancipation

In a mesmeric new London production of Rosmersholm – Henrik Ibsen’s tragedy of social and sexual politics – the women look like the décor: frayed around the edges. Beautifully staged at the Duke of York’s Theatre, the play is set in a once-grand, now mildewed, Norwegian manor house at the tail end of the 19th-century. The dust sheets are on, the flowers are dead, the good china is packed away. And the women want to let the air in.

Rosmersholm hasn’t been staged in London for more than a decade and Duncan Macmillan’s streamlined adaptation proves to be a timely revival. The play – a blend of political manifesto, ghost story and melodrama – fuses together some extremely live gender wires. The fin-de-siècle mansplaining triggered ripples of uncomfortable giggles on the night I went.

At the centre of Ibsen’s story is Rebecca West (played by Hayley Atwell), a former companion to Beth, the wife of the master of the house, Pastor Johannes Rosmer (Tom Burke). A year earlier, distraught by her childlessness and marital problems, Beth drowned herself in the local mill race. Since then, Rebecca and Rosmer – stricken by guilt and tortured by a tacit passion for one another – have endured a kind of domestic stalemate. 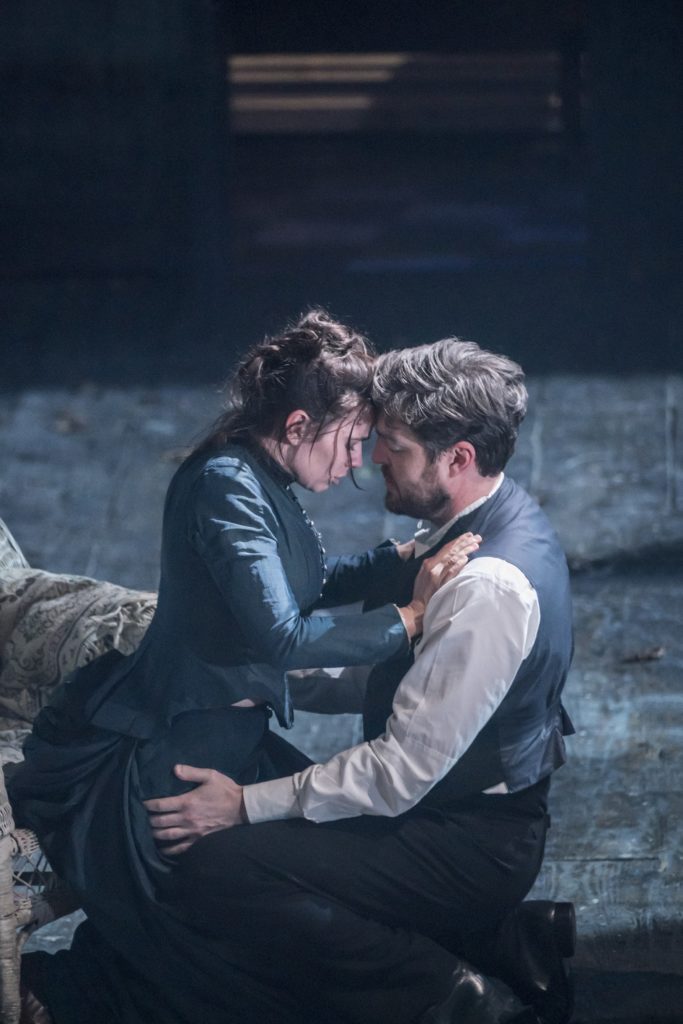 This personal crisis coincides with a very public debate on the rights of women. With an election on the horizon, Rebecca – powerless to effect change herself – tries to influence a man of influence by gaining Rosmer’s support for reform.

The status quo is represented by Governor Kroll, Beth’s brother and local spokesman for the traditional ruling class. “A woman who follows politics!” an incredulous Kroll says. “I thought being excluded from voting would afford you the luxury of not needing an opinion.”

For women navigating the choppy waters of pre-emancipation Norway, there were as many rocks and hard places as there were in the fjords. But Rebecca is a woman who sees herself at the helm.

“The character had been perceived through quite a misogynistic lens,” said Atwell in a recent interview on Radio 4. “Reduced to a manipulative, cold, femme fatale. The destroyer. And, ultimately, what she is, is a free-thinking radical. A woman born before her time who inherited nothing, had no vote, no wealth or status of her own and wants agency in the world.”

With considerable skill, Atwell details a juggling act of ethics, sentiments and practicalities – she did something similar on television as Margaret Schlegel, the conflicted heroine of EM Forster’s Howard’s End. Her performance on stage is a masterclass in emotional archaeology, as Rebecca’s veneer of confidence cracks to reveal layers of compromise. 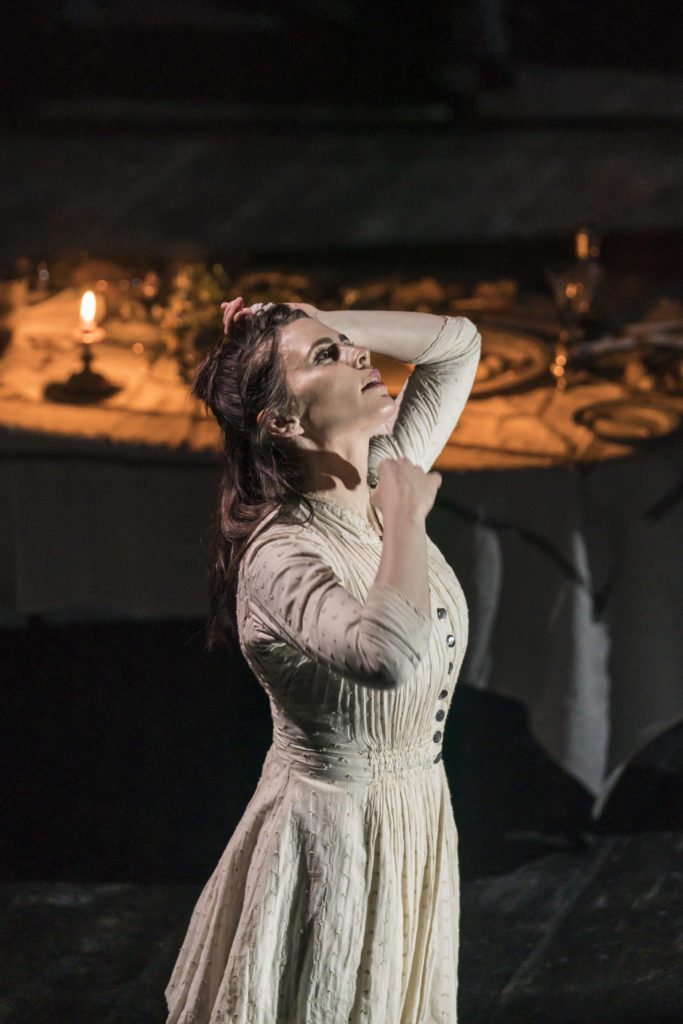 “Let me speak,” demands Rebecca three quarters of the way through the play. As Atwell points out, West is “an alpha female”. But she is no simple cypher for a cause. She is elegant, teasing, funny and furious. And it is her tangled psychology – Sigmund Freud was fascinated by the character – which is her undoing as much as the men in her life.

There are other women at Rosmersholm, unsettled in other ways. A counterpoint to Rebecca – a woman of action – is the manor’s housekeeper, Mrs Helseth, whose mind is shelved like the larder she maintains. As played by Lucy Briers, she is a retainer of no-nonsense rigidity. When Mrs Helseth questions the perceived wisdom of her position, however, we discover a sour understanding curdling underneath. “You notice a lot when you run a man’s household,” she says drily. 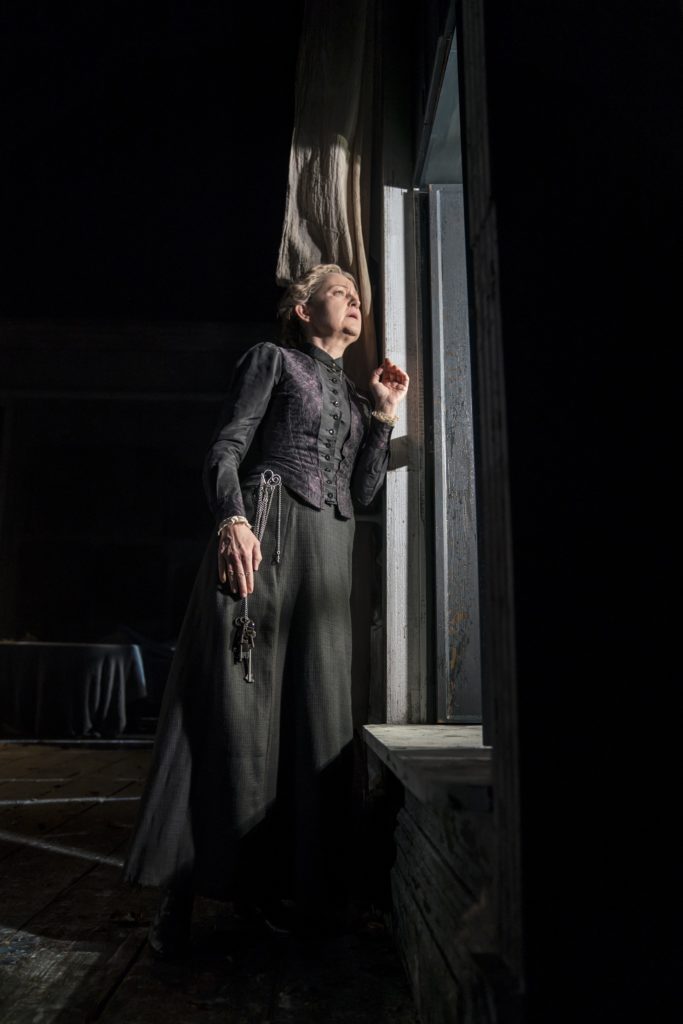 Meanwhile, the house maids come and go and listen in (Ibsen’s first love was a maid, with whom he fathered a child). In this sleek production the supporting cast express a lot with little: a minor revolt with a glance, an awakening with a pause in their duties.

But, perhaps, the most intriguing women of Rosmersholm are the ones that are absent. The spectre of Beth hangs like the mist around the manor, not a malign force exactly, rather a portent. Ibsen never dismisses her as the “mad wife”. Her capacity for love is recalled. Indeed, Rosmer’s inability to satisfy his wife’s “appetites” was part of the problem. 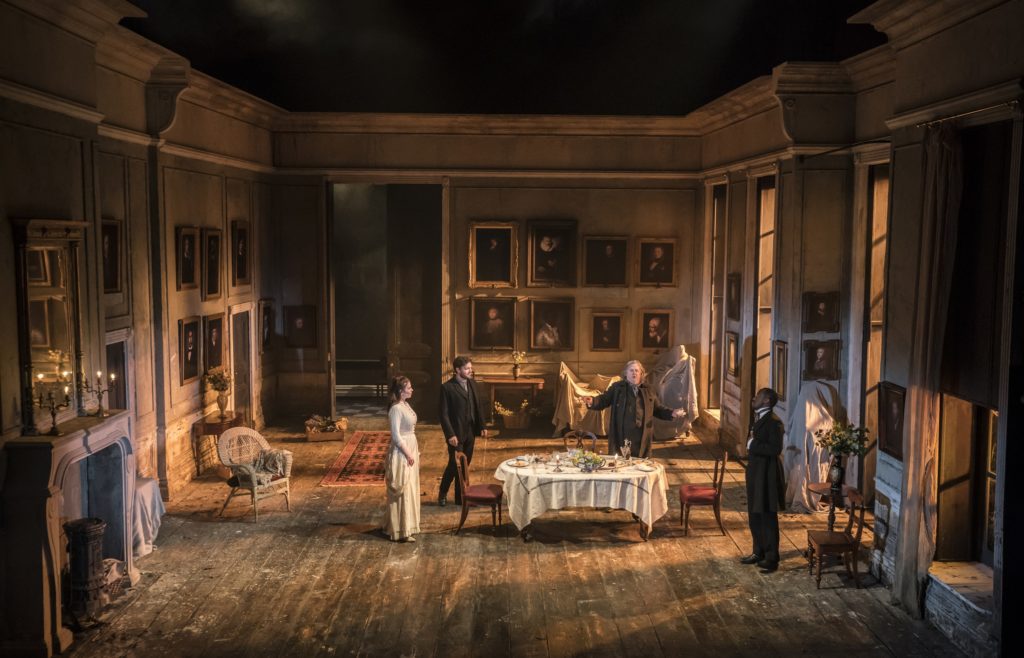 Rosmersholm at the Duke of York’s Theatre (Photograph: Johan Persson)

And then there is the vanishing act presented by the house itself. Rae Smith’s set design creates an atmosphere of nobility gone to seed. Most of the play takes part in Beth’s room, which, in Norwegian tradition, has been shut up for a year and a day following her death. The walls are a gallery of dusty portraits of steely-eyed old men, not a mother in sight. “I love the idea of patriarchy being represented by the paintings in Rosmer’s house,” Smith says.

This theme, of a blemished and redundant edifice, is echoed in the words of Ibsen’s heroine – when she does finally get to speak: “This house – everything it represents,” Rebecca says, “I wanted to burn it to the ground.”

10 June 2019 / Christian House is a freelance arts and books writer for The Telegraph, Observer and The Art Newspaper Categories