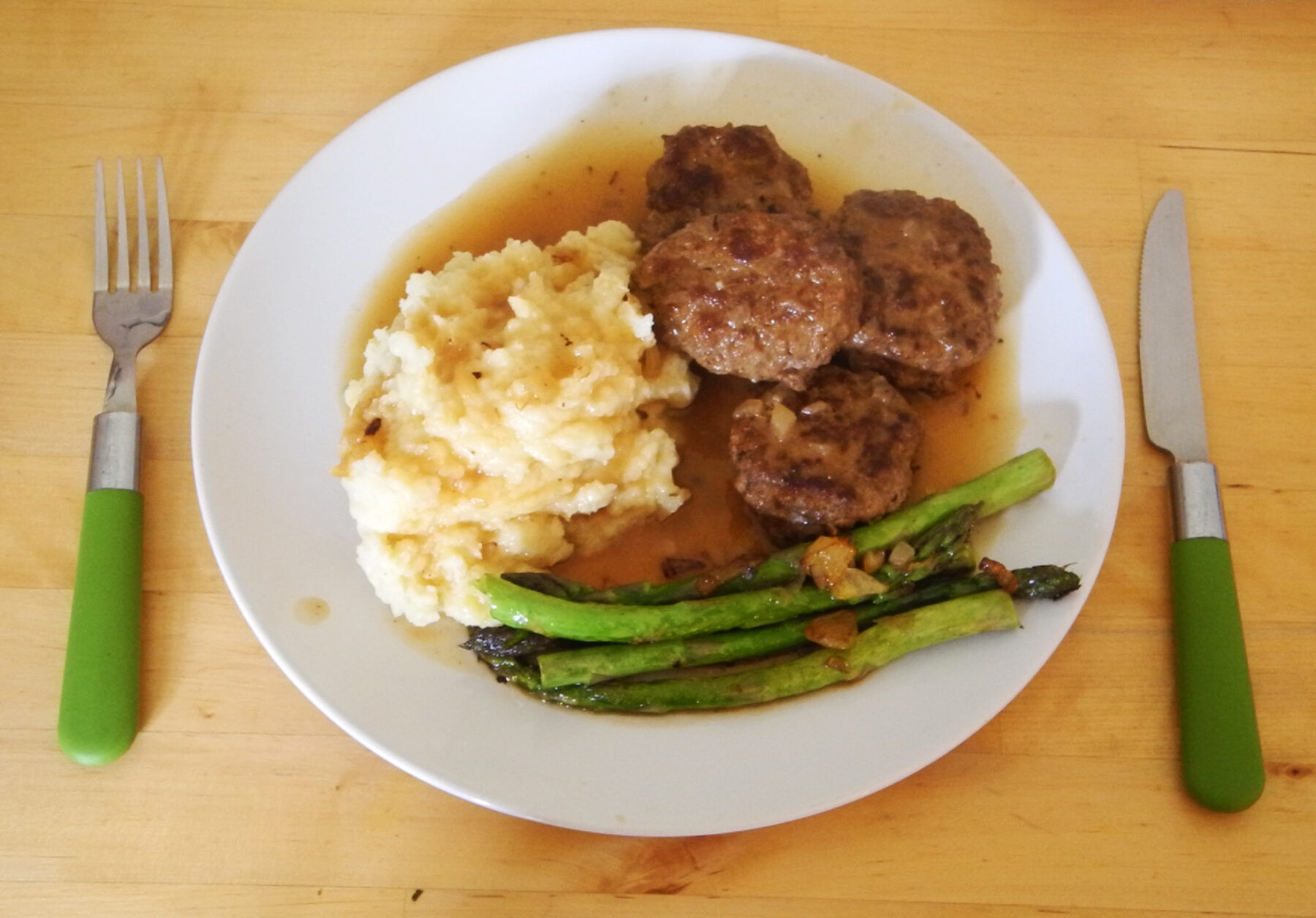 After taking on the Norwegian brown cheese last month, our resident food writer and all-round explorer of Norwegian culture, Luke Slater, is ready for a proper challenge in his new column, trying out traditional dishes from Norway: kjøttkaker – or meatcakes – are next up on the menu.

My first genuine attempt at cooking a classic Norwegian dish – putting brunost on scones doesn’t really count – is kjøttkaker. They are something you can’t, or at least shouldn’t, go wrong with. Even in a kitchen as small as mine. It’s a simple enough dish that doesn’t require too many ingredients, much preparation or any challenging culinary skills.

My first experience of kjøttkaker came during one of my early trips to Norway, whilst staying with my English friend and his Norwegian girlfriend. They had both raved about them to me before serving them for dinner one night but my basic Norwegian skills meant I couldn’t work out what exactly I’d be eating. 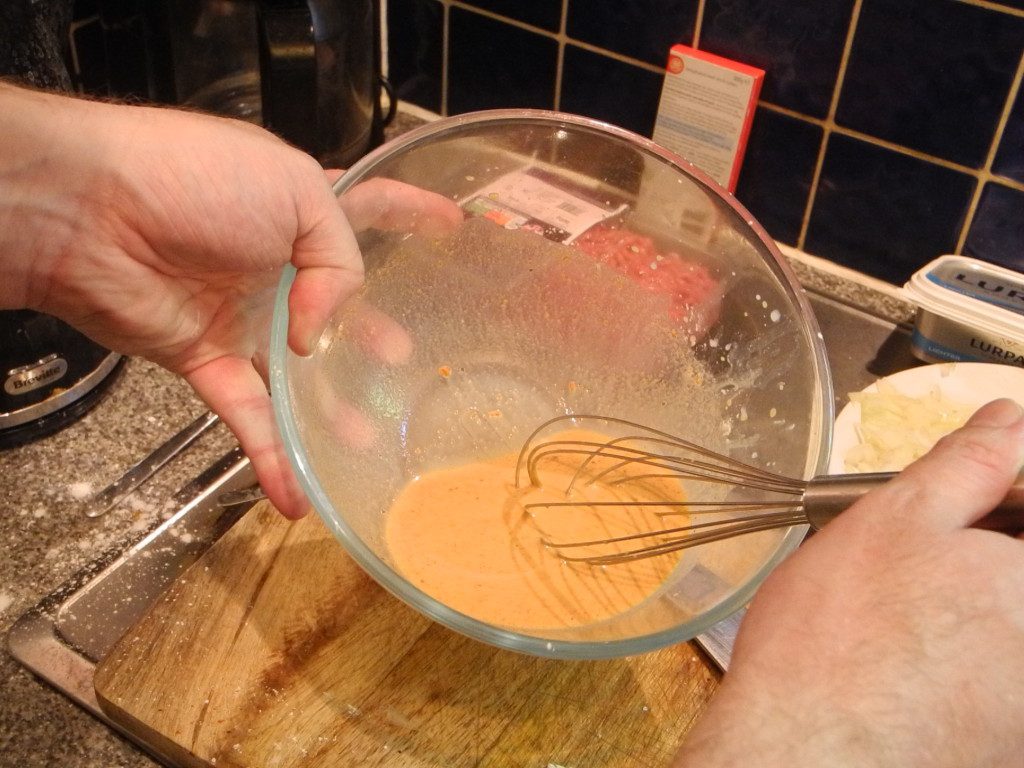 After a little thinking, I realised that the “kaker” meant “cakes” but the “kjøtt”? Not a clue. I thought of savoury cakes and imagined a pie of some kind. I was a little surprised, then, when my plate arrived with several meat patties, lathered in a thick brown gravy. Not that I was disappointed with something that appeared to be a meatball-burger hybrid. “Kjøtt” it turned out, is “meat”, and “kjøttkaker” are literally “meatcakes”: an accurate description.

Now, onto the cooking. Making the binding agent for the mincemeat is the first job. The recipe I had used nutmeg, salt, black pepper, paprika, cornflour, all-purpose flour and milk. You put this all into a large bowl and then whisk until the mixture has no lumps. Then the minced meat (half a kilo of beef for me, but pork and/or veal or a combination works) goes in and you stir until the mixture is absorbed. The smell at this point is delicious and you’ll most likely to be keen to get going. 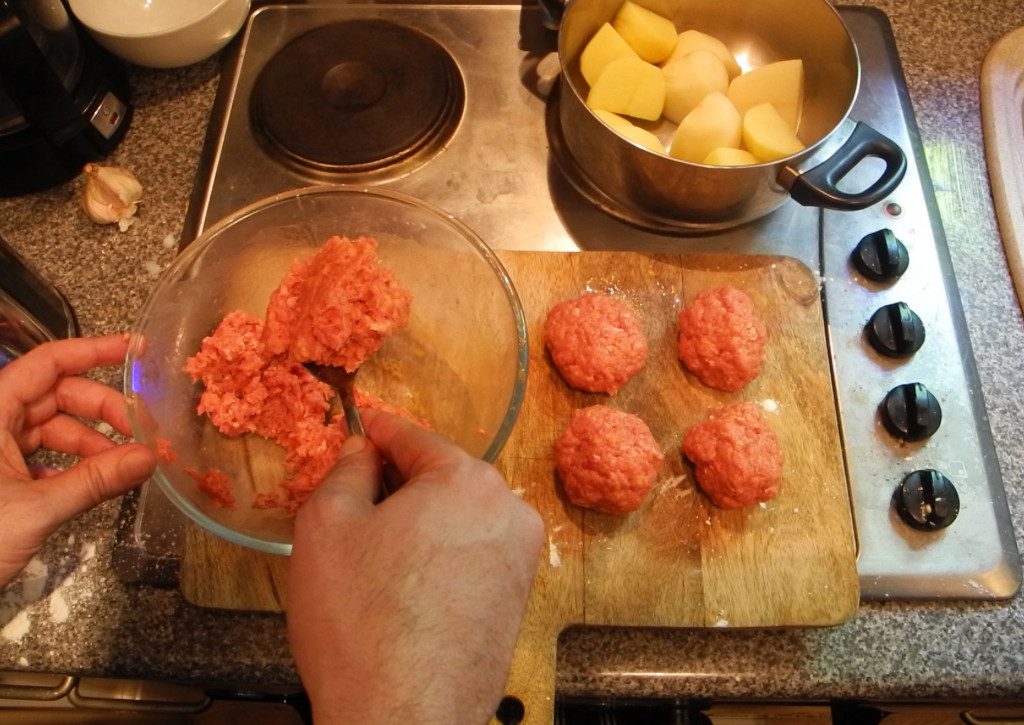 After that, portion the meat out into the individual “cakes”, shaping with a spoon or just your hands (this is surprisingly therapeutic). Then firm them up and pop them in a frying pan with butter on medium-high heat, flattening the tops as you go to make a rounded, coarse burger shape.

Serving kjøttkaker with boiled potatoes and mixed vegetables is quite traditional. Ultimately, though, it’s up to you but the dish is versatile enough that you could have it with a wealth of options. I go for a creamy, buttery mash potato with onion gravy (the gravy is an important part) and, because it’s the best time of the year for it, a few sautéed asparagus spears. 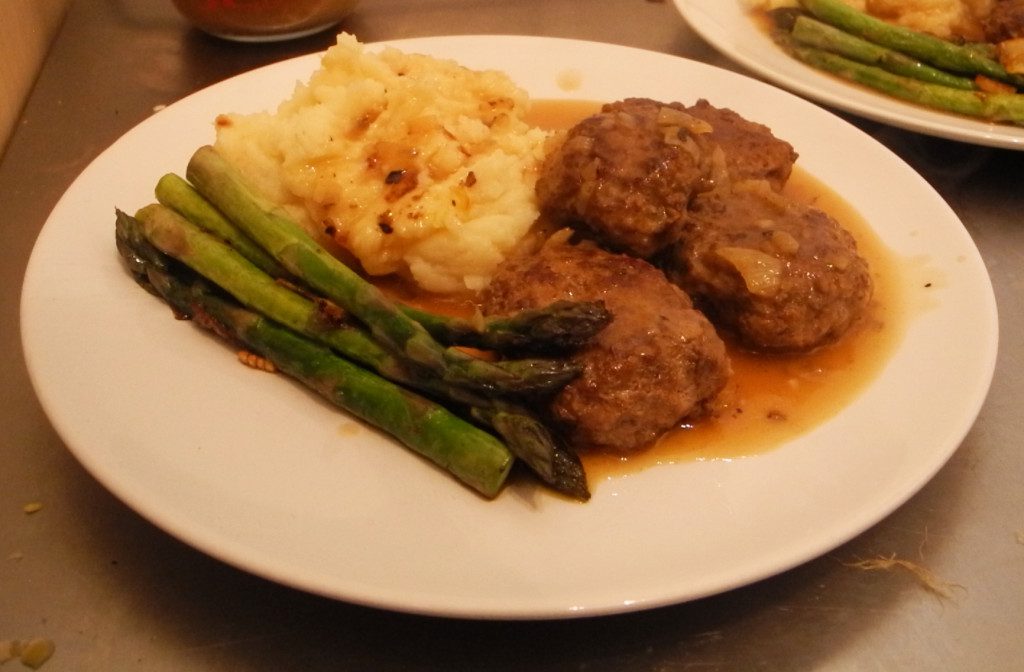 Result: success. The only slight negative was that I put the kjøttkaker in the oven on a low heat whilst I mashed the potatoes, which dried them out a little – a note for next time. The flavour, however, wasn’t affected at all. I bit into the first one expecting the flavour to essentially be a peppery burger, but the paprika and especially nutmeg come through strongly. To conclude: a dish this simple and tasty deserves to be made again and again.