Odd is an Egg, Going West and Thelma represent Norway at this year’s festival.

BFI London Film Festival has started. The annual festival is known for an international assemblage of films, and this year two feature films and one animated short film from Norway is included.

Odd is an Egg

Odd is an Egg is the story of Odd, who stops worrying about danger when he befriends a girl who is like a bee. The acclaimed story has now been adapted into film, directed by Kristin Ulseth.

Imagine that your head is an egg that can break at any time. Every move has to be made with caution and all activities and games are unfeasible. Odd’s head is infact an egg, and every day he faces these challenges. However, Odd’s life turns upside down when he meets the fearless and optimistic Gunn. 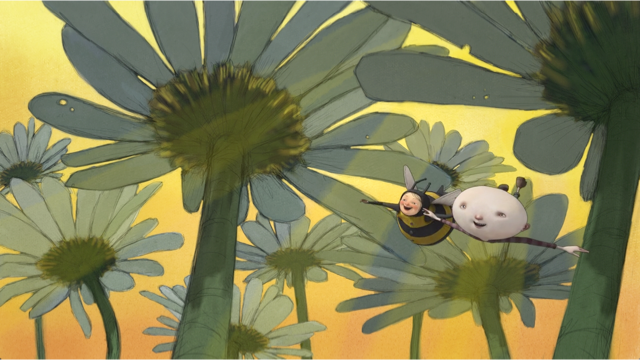 Odd is an Egg is part of London Film Festival’s Animated shorts for younger audiences at 8 October at BFI Southbank.

Going West is a warm and amusing film about the silver linings of grief and sorrow. The film is written and directed by Henrik M. Dahlsbakken.

Substitute teacher Kasper loses his job, and the very same day, his transgender father Margrethe is having a mental breakdown. In order to escape their misery the two of them travel across the mountains to the remote island Ona. There, they intend to represent Kasper’s recent deceased mother in the national quilting championship and hopefully find a way to revitalise their relationship.

Going West is set for two screenings 9 and 10 October at Curzon Mayfair Cinema and Vue Leicester Square. Director Henrik M. Dahlsbakken will be present for a Q&A after the first screening.

Co-written and directed by Joachim Trier (Oslo August 31th, Reprise, Louder than Bombs), Thelma is a romantic, supernatural thriller about a young woman’s encounter with love and frightening, baffling powers.

After having left her religious, overprotective family on the Norwegian west coast to study biology in Oslo, Thelma experiences a severe seizure. At the same time, she meets fellow student Anja, and a mystical attraction occurs between them. As Thelma’s emotions grows beyond her control and assertiveness, her seizures become stronger and more frequent. Frightening and baffling powers emerges and one day, Anja is gone.

Still from Thelma – Photo: Motlys AS

Thelma is set for two screenings 14 and 15 October at Embankment Garden Cinema, and director Joachim Trier will attend both screenings for exclusive talks.