With their overview exhibition at London’s Whitechapel Gallery drawing to a close, Ingar Dragset, the Norwegian half of the Berlin-based Scandi artist duo Elmgreen & Dragset, talks to Norwegian Arts about the pair’s relationship and shared persona, the sense of humour in their work, national identity, and his thoughts on the Norwegian contemporary art scene

Since unveiling a decaying public swimming pool as part of their major overview exhibition at the Whitechapel Gallery back in September, Elmgreen & Dragset – the Berlin-based, Scandi artistic duo comprising Michael Elmgreen (b1961, Copenhagen) and Ingar Dragset (b1969, Trondheim) – have been the talk of the town. Their often parodic and playful work, of course, was already familiar to Londoners and tourists alike (even if the artists’ names remained unknown), as their 4.1-metre golden sculpture of a boy on a rocking horse, Powerless Structures, Fig 101, had regally crowned Trafalgar Square’s Fourth Plinth for 18 months from February 2012 – throughout the London Olympic Games – attracting largely positive responses, including from British actress Joanna Lumley, who unveiled the piece, describing herself as “thrilled” to be revealing such a “completely unthreatening and adorable creature” to the public.

Elmgreen & Dragset met in a gay club in Copenhagen in 1995 – Elmgreen was a poet, and Dragset had studied theatre – and, discovering they lived in the same building, went on to form both an artistic and personal partnership. Twenty-three years on and the latter has dissolved, but the strength of their artistic commitment and unity has survived this rupture and their creativity is as prolific as ever. “As for us as a duo”, Dragset says, “we’ve been working together for so long that it’s like a third persona has arisen from our collaboration. We are definitely one unit.”

Elmgreen & Dragset’s work interrogates notions of identity – both personal and political, in terms of nationality, class, sexuality – and more often than not the ghost of this third persona haunts their sculptures and installations. For example, “Tomorrow”, at the Victoria and Albert Museum, London, in late 2013, transformed the former Textile Galleries into an apartment belonging to a fictional, elderly and disillusioned architect. In 2009, they exhibited across both the Nordic and Danish pavilions at the Venice Biennale – a first in the history of the international art event, for ‘one’ artist to take on two national pavilions in the same year. “This felt like a very special occasion”, Dragset recollects. “We immediately thought that we wanted to blur the idea of national representation further, so we combined our own work with that of 23 other artists to create a mise-en-scène installation of the home of a dysfunctional family in the Danish Pavilion, and that of their bachelor neighbour – a dead collector – who resided in the Hockney-esque Nordic Pavilion next door.”

“We’ve been working together for so long that it’s like a third persona has arisen from our collaboration. We are definitely one unit.”

Despite having lived abroad for most of his life, Dragset still has his finger on the pulse of the Norwegian contemporary art scene. “With the comparatively good funding system for younger artists and artist-run spaces, [there seems to be] quite a big number of interesting young galleries that are not necessarily commercially focused,” he says. “Long-standing institutions such as UKS (Young Artists’ Society) and OCA (Office of Contemporary Art Norway) continue to do a great job creating a dialogue between the Norwegian art scene and foreign art communities. Private/public collaborations such as the Ekeberg Sculpture Park have also heightened the country’s art profile domestically and abroad.” 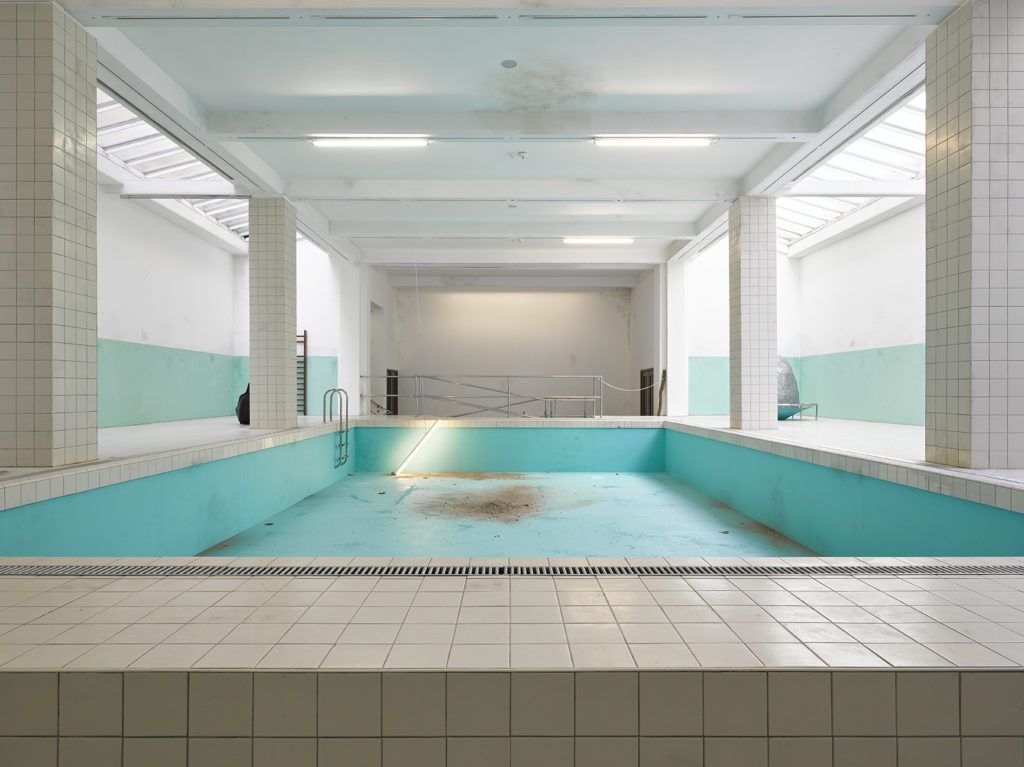 Recently he was positively surprised by the scope and professionalism of the less famous public sculpture programme of the municipality of Trondheim where he grew up. This summer, the duo unveiled a permanent sculpture in front of the city’s train station, entitled Forventning [Expectation]. “There are also a few new biennials around,” Dragset continues, “and I am myself a member of the artistic advisory board for Bergen Assembly, a triennial that serves as a model for new kinds of artistic production and research. It seeks to recognise the diversity of practices in contemporary art today, and is not necessarily presented in a traditional exhibition format. Being a part of something like this in Norway means a lot to me because it’s a chance to be part of a larger dialogue about changing methods and new forms of experimentation in contemporary art and related fields.”

For Elmgreen, the native Dane, the duo is also behind the contemporary revisioning of the Danish national icon, The Little Mermaid, at the Kulturevaerftet Helsingør. Entitled Han [Him], it stands on a jetty just below the famous Kronborg Castle, which served as the setting for Shakespeare’s Hamlet. I wonder whether they might create something similar for Norway, but Dragset says he can’t think of a Norwegian icon open to such a twist. “You are always welcome to imagine one under the white veil of Forventning,” he offers, however. “It looks like a sculpture that will soon be unveiled, but never will – it is all cast in stainless steel and will forever defy or fulfil expectation – depending on one’s personal take on it.”

“After we’ve realised a work, it’s like we set it free out into the world. Then it’s up to the audience to make their own interpretations of it depending on their backgrounds.”

The audience indeed plays a big role in Elmgreen & Dragset’s work and visitors are often invited in to sit, handle objects and books, even drink within their installations. “After we’ve realised a work, it’s like we set it free out into the world,” says Dragset. “Then it’s up to the audience to make their own interpretations of it depending on their backgrounds, and to fulfil the narratives we have only given clues to.” He thinks this perception of the audience as co-author might derive from the duo’s having started out in a very collaborative scene in Scandinavia in the 1990s, as well as from having worked with performance. “Performance art make you very aware of your surroundings and the audience’s presence and reactions.”

“It’s a show about feelings being held inside, about silence. It’s about looking for a new language in a time that feels unsettling and uncertain to many of us.”

The duo is currently also exhibiting at the National Gallery in Singapore, as part of a large group exhibition called ‘Minimalism: Space. Light. Object’. For this, they have created a life-sized oval bar, Queer Bar/Powerless Structures, Fig. 221, complete with stools and beer taps and apparently fully functional. Appearances are deceptive, however, since visitors soon become trapped inside the closed loop of the bar, with the taps only accessible from the outside. “The work questions matters of exclusion and inclusion and considers the direct influence that design and architecture can have on individuals’ behaviour,” Dragset explains. “The bar is an impasse: people can see and approach it, but they are not able to have a drink.” To date, this is the artists’ fourth ‘inverted bar sculpture’, all of which, in juxtaposition to so many of their other works, reject public engagement and create a distance between the structure and the viewer – something the duo terms ‘denial’. “Through these ‘denials’– a physical rejection of a seeming invitation – we hope to trigger another way of thinking in the audience, rather than what comes more easily with straightforward interactivity.”

As was the case with Powerless Structures, Fig 101, which was created in dialogue with the other equestrian sculptures in Trafalgar Square, when conceiving The Whitechapel Pool, Elmgreen & Dragset were very aware of the location for which it was being created. “We were thinking about the kind of gentrification that’s happened in East London over the past decade, as well as the disappearance of shared community spaces. Eventually, we came up with the idea of transforming the gallery space into an abandoned swimming pool.”  Again, they created a fictional history to accompany the pool, detailing its rise as a famed public amenity that later lost government funding and then got sold off for private investment. “Even though we incorporated local details into our narrative – including hinting at [former Mayor of London] Boris Johnson being responsible for the sell-off of the building – stories like these are not unique to London,”  Dragset is quick to point out. “They’re also happening in other cities where austerity measures, privatisation, and real estate speculation are impacting community spaces.” 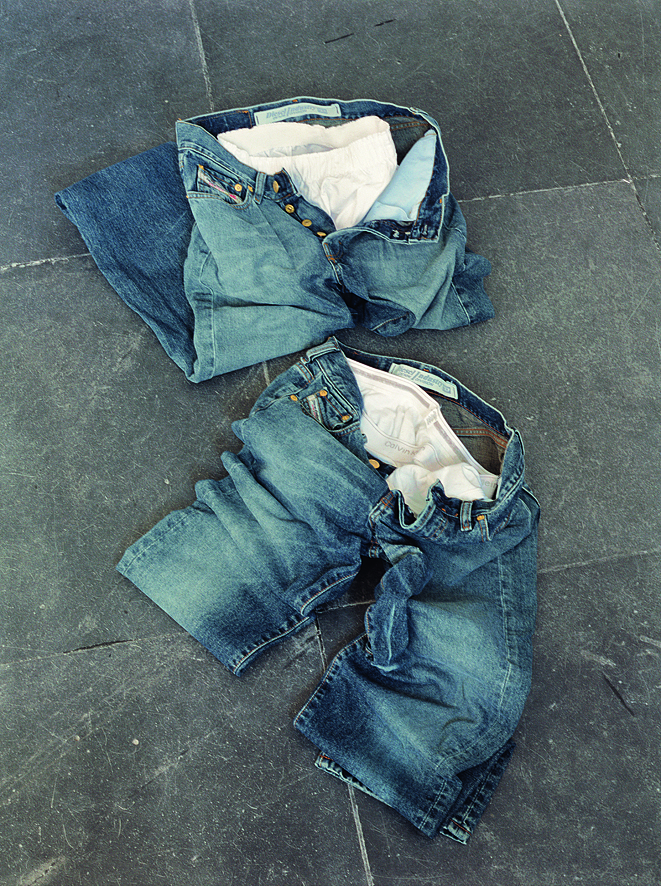 The title of the exhibition, This Is How We Bite Our Tongue, refers, he says, to the things that people don’t say aloud. “It’s a show about feelings being held inside, about silence. It’s about looking for a new language in a time that feels unsettling and uncertain to many of us. And, even though the expression ‘to bite one’s tongue’ exists in Scandinavia as well, there seems to be something very British about it – no offence!” And that, in a nutshell, is what makes Elmgreen & Dragset’s work so enjoyable and enduring – despite being subversive and political, it doesn’t set out to offend. Rather, its raw honesty and intriguing hints of narrative draw the audience in – although who has the ultimate say as to just how far remains firmly in the hands of the artists.

Elmgreen & Dragset’s This is How We Bite Our Tongue is on at Whitechapel Gallery until January 13th.