As MUNCH – a monumental new museum dedicated to Edvard Munch – opens on the Oslo waterfront, the surrounding Bjørvika development gains worldwide attention. Giovanna Dunmall looks at an endeavour that has blended culture, commerce, home life and water sports and helped bring the city together.

Oslo is home to one of the largest waterfront redevelopment projects in Europe and, by some measure, the biggest urban renewal project in Norwegian history. Slowly but surely some 228 hectares of former industrial land running along the capital’s breathtaking fjord are being transformed into a series of mixed-use neighbourhoods connected by a 9km-long harbour promenade dedicated to cycling, walking and water sports. The most high profile of these new neighbourhoods, Bjørvika, is located in a former container port just below the city’s main train station and now boasts three of the city’s most important cultural buildings – the Opera House, the city’s Deichman library and MUNCH, a museum dedicated to the prolific output of Norway’s most celebrated artist, Edvard Munch, opening 22 October – as well as, among other things, residential quarters, offices, recreational spaces and a park featuring the medieval remains of the city. 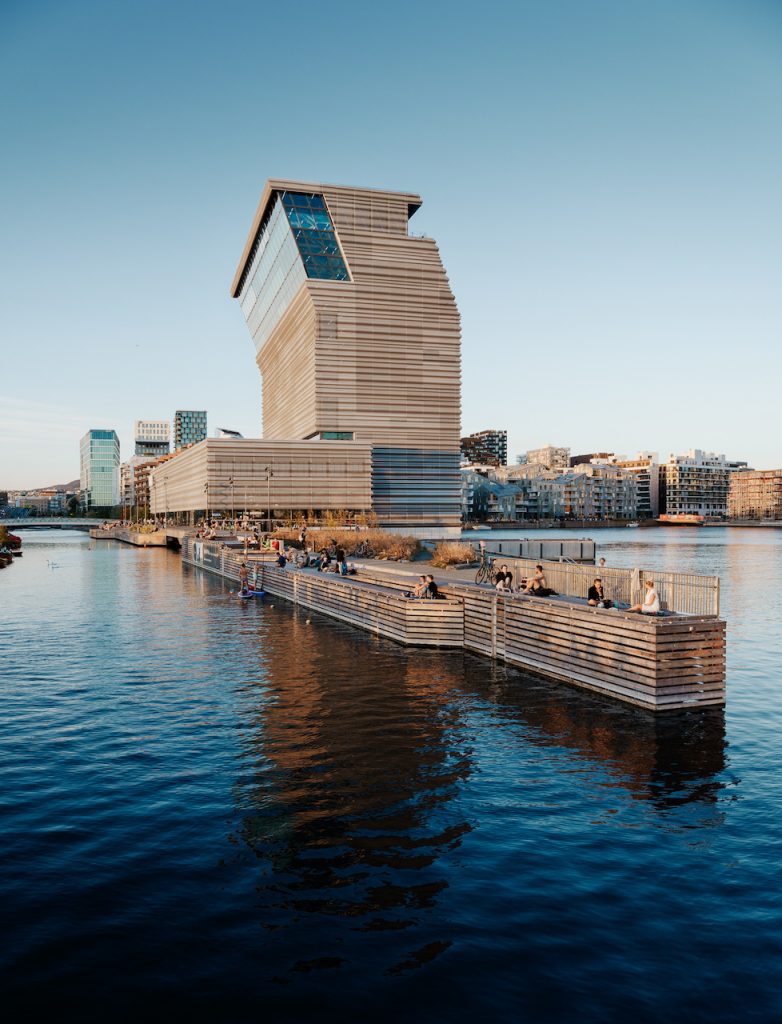 Though the Fjord City project, as it is known, was first set in motion in the early 1980s, it was the 2008 opening of the all-white Oslo Opera House, designed by the internationally famed architecture practice Snøhetta, with its hugely popular walkable sloping roof, that really changed things for Bjørvika. The next major development was the Barcode, a series of graphic monochrome skyscrapers by big name practices such as MVRDV, Dark Arkitekter and Snøhetta, followed by Sørenga, an upmarket residential area to the east which opened in 2015, with a seawater pool at its tip.

“We couldn’t ever have imagined all the floating saunas, the kayaking, the paddle boarding and the diving.”

This urban beach started a ripple effect of recreational water sports across the waterfront and a literal beach – Opera Stranden – opened in Bjørvika this summer. “We thought that people would come and have a swim every now and again but we couldn’t ever have imagined all the floating saunas, the kayaking, the paddle boarding and the diving that goes on in the water now all year round,” says Stein Kolstø of Oslo’s Waterfront Planning Office. Cycling is also at record levels, he says, partly due to the intentional lack of parking space for cars in the district. 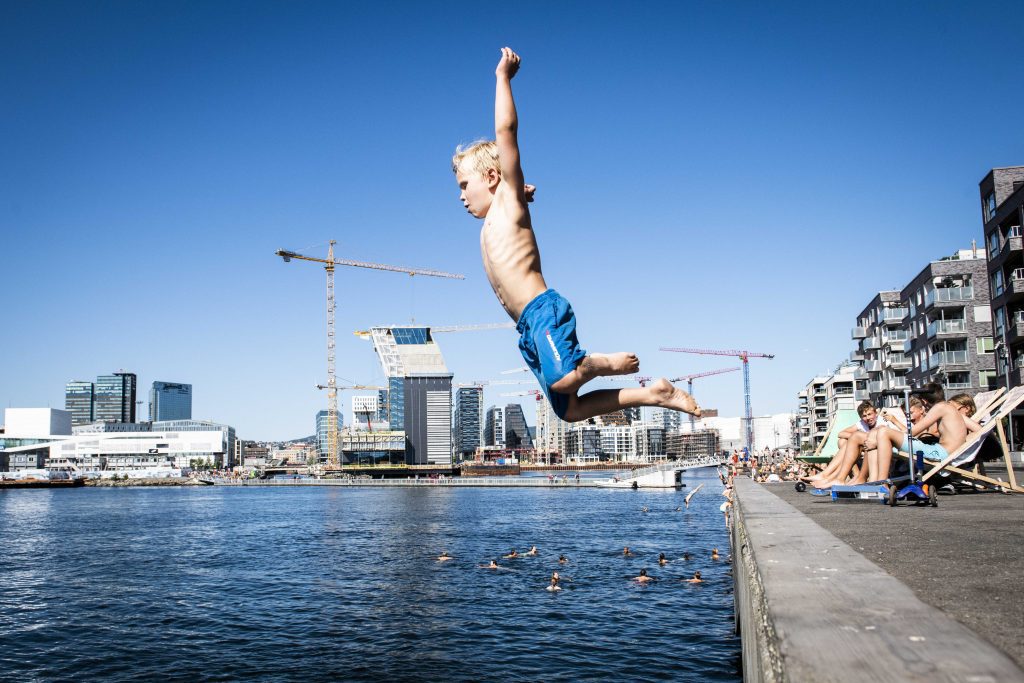 Just two decades ago it was a very different story. Huge swathes of the waterfront, which was mostly owned by the port, were no longer in use. “There were some harbour activities but there was also crime and it had become a bit of a wasteland,” says Anne Beate Hovind, who has been responsible for art programming in Bjørvika for 18 years.“There were signs saying no entrance and in people’s minds the waterfront was really far from the city, which shows how distance isn’t always a matter of physical distance but also a mental thing.”

That divide was exacerbated, explains Kolstø, by a three physical barriers: a busy motorway that ran alongside the coast from west to east (including a major raised intersection above Bjørvika), a railway line that connected the city’s two stations in the east and west, and cargo terminals used by the Port Authority.

“We want the whole population to come down and use the harbour promenade.”

The port has since been relocated south-east of Bjørvika, the motorway has become a set of underground tunnels (financed by an Oslo-wide toll system) and the city now has just one main railway terminal, Oslo Central, to the east. Above all, a great deal of care has gone into stitching the waterfront area into the rest of the city so that it doesn’t feel cut off or unwelcoming. “We do not want the fjord city to be a segregated area for just a few people to use, we want the whole population to come down and use the harbour promenade,” says Kolstø. “That is very important.” 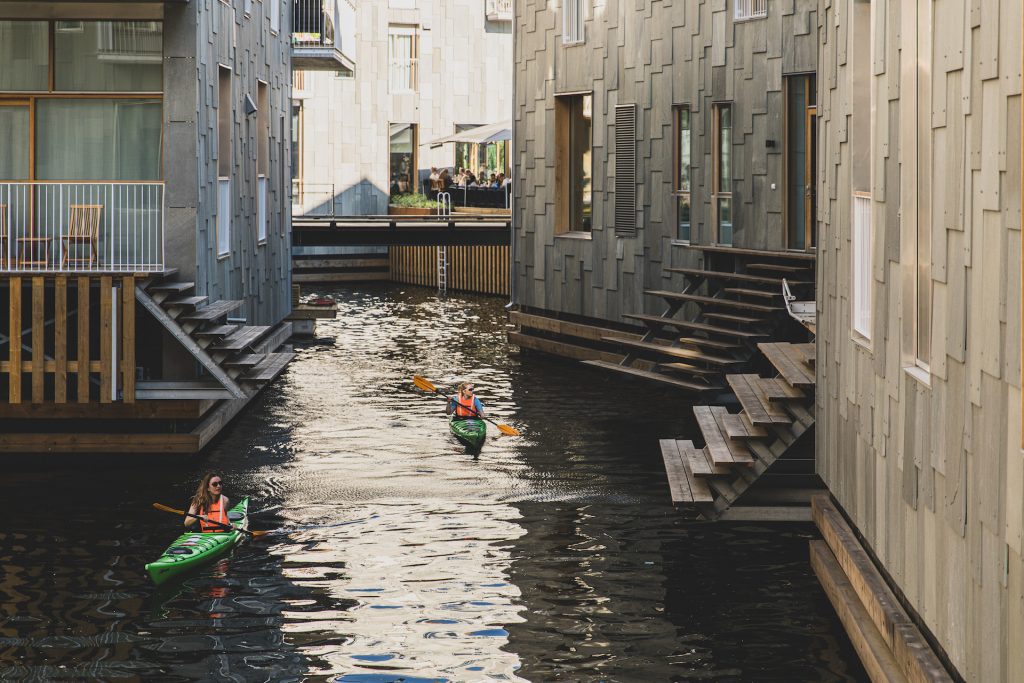 To encourage this, a series of seven Allmenninger – the equivalent of a common in Britain – have been created in Bjørvika, public spaces designed to connect the existing city to the newly developed areas and the fjord. Allmenning is a concept that has existed for centuries and first came about when cities were made of wood, explains Kolstø. “Originally these allmenninger were public spaces where it was forbidden to build houses, so that when there was a city fire, it would not be able to spread. But, of course, these spaces also became popular with residents as gathering areas.” 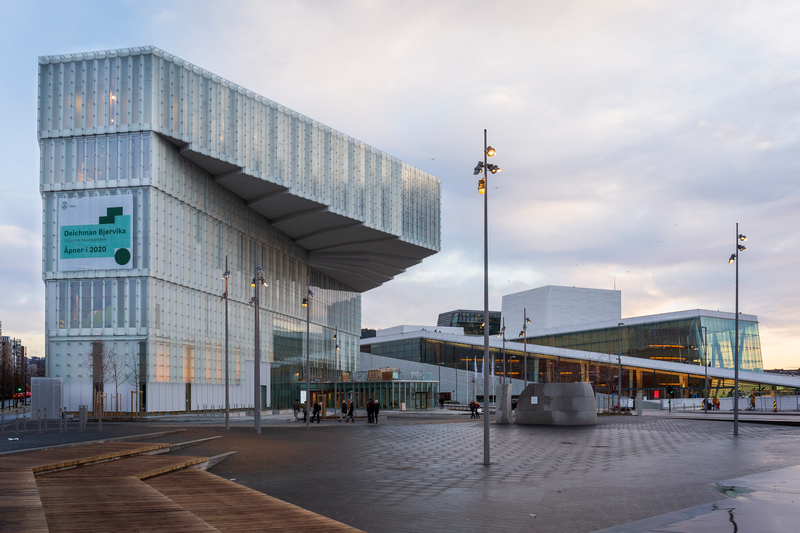 One of the most famous ‘commons’ is the Opera Allmenning, which starts at Karl Johans gate, the main pedestrianised shopping street in the city, and passes through two public squares to reach the new Deichman library in Bjørvika and then on to the Opera House and the waterfront. If the success of the new library is anything to go by, these connecting spaces are already a success. “I actually get a bit emotional when I visit the library because I see people from all over the city and of all ages just hanging out,” says Hovind. “Libraries have always been safe spaces for young women and people from poorer or immigrant communities but this one has managed to attract an even more diverse mix than its predecessor. It’s a genuinely successful public space.” And one that offers the sort of sweeping views of the fjord, especially from its dramatic top floor cantilever, that one might associate rather more with a high-end hotel than a free-to-access civic space. 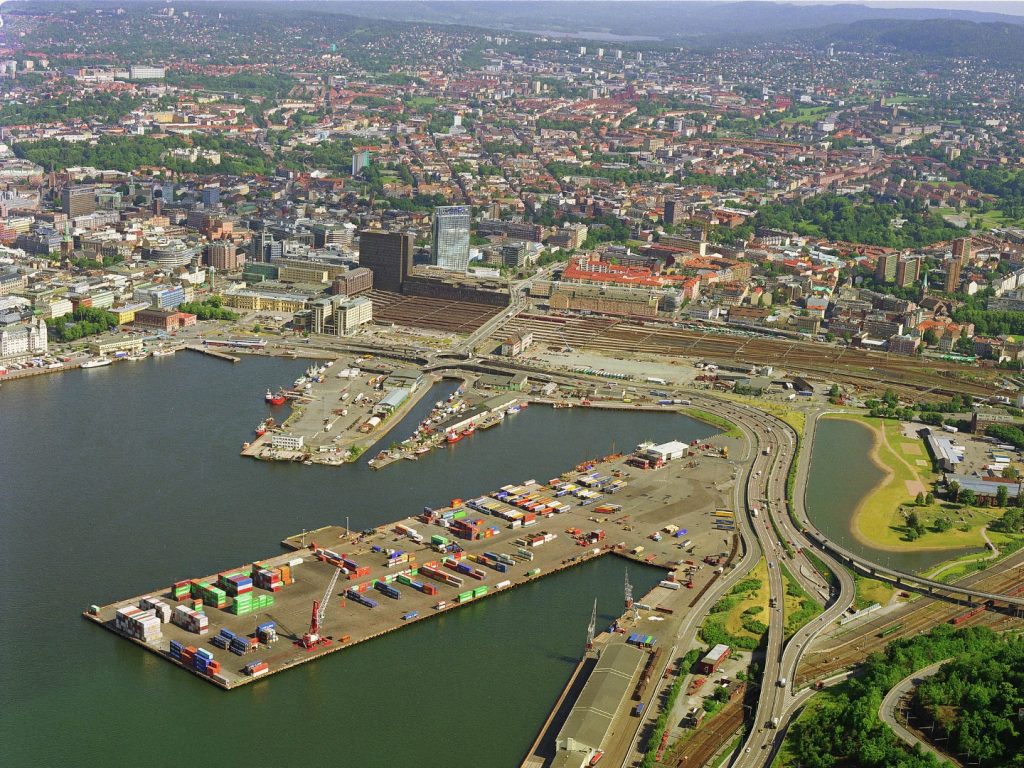 The Oslo waterfront before the Bjørvika development (Photo: courtesy of Anne Beate Hovind)

As with many urban renewal projects, it hasn’t been without its difficulties. When you are dealing with a regeneration project of this length and magnitude (the Fjord City plan is intended to conclude circa 2040-45, though Bjørvika is already about two thirds complete), the people involved will change several times, as will social values, customs and requirements, says Hovind. At first people found it hard to understand the thinking behind Bjørvika, especially when the famous Barcode buildings were built and impacted the view. 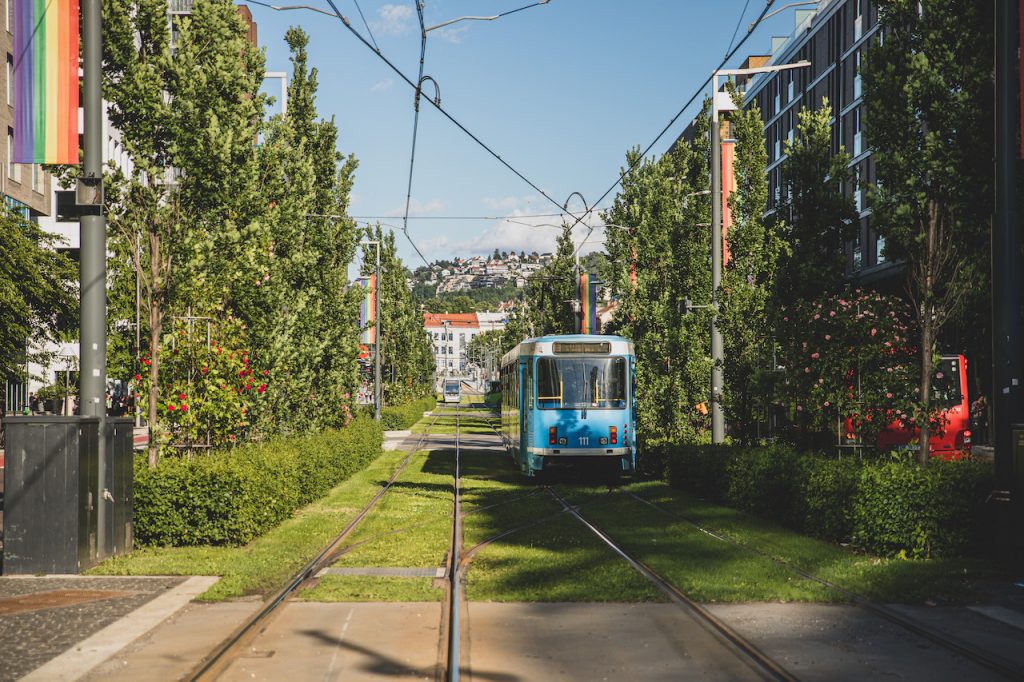 “One of the last parcels of land for development in Bjørvika is a small island situated between the opera and the Munch museum, known as Sukkerbiten [sugar cube],” says Hovind. “Originally the masterplan foresaw a certain amount of square metres of cultural space here but many people now want to see a park and green space here instead.” There is a developer-led proposal for a new photography exhibition centre to be situated here, modelled on Fotografiska in Stockholm, but opponents of the scheme say another landmark building is not needed, nor is more concrete, and have suggested alternative more low-key uses. No decision has yet been taken by the city government but whatever the outcome, says Hovind, what is important is that as the city and its population change, any strategy or plan be as flexible and responsive as possible. 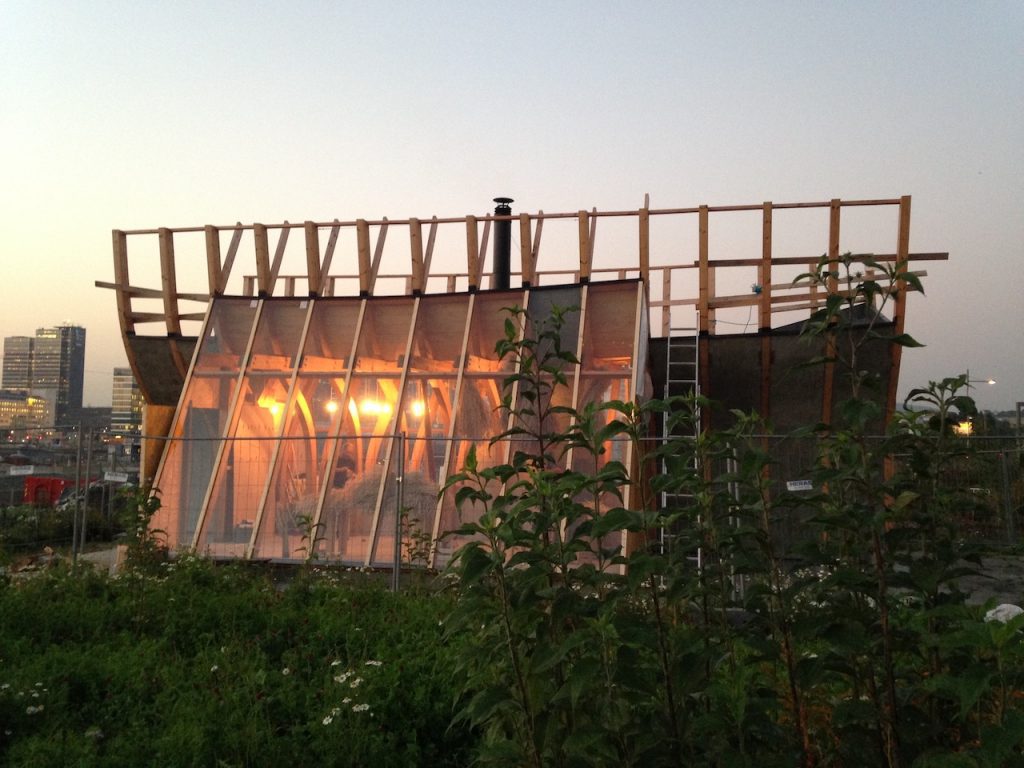 Bakehuset – the bakehouse – in Bjøvika (Photo: Oslo S Utvikling AS)

“What’s relevant for our urban lives now?” she asks. “Nobody was talking about urban farming 20 years ago for instance, nobody thought of programming it but if we hadn’t been willing to adjust our direction, we would never have built a farm here.” Hovind is referring to the art and urban food production project by the Futurefarmers art collective, commissioned in 2011 by Bjørvika Utvikling (the organisation responsible for public space in the district). Located on a parcel of land above Sørenga, it started as a temporary scheme but today it attracts some 400 volunteers, as well as visitors who use it as a park. In the summer, it also hosts popular weekly community meals. The city recently took over management of the site (which houses a bakehouse, a field dedicated to growing heritage grains and a collective organic farm) and hired a full-time farmer. “It is now “98% certain it will remain,” Hovind says with pride. “It just has to get through the regular planning process.”

In some ways, Bjørvika has become a victim of its own success, admits Kolstø. Despite an impressive 40% of the new neighbourhood being dedicated to public or green space, he believes they would have allotted even more had they known how popular its recreational waterfront spaces would become. This has been taken into account in the next neighbourhood in the Fjord City project, Filipstad, located near the new Norwegian National Museum (opening in June 2022) in the west of the city. “We have reserved more space for parks and urban beaches there and larger buffer zones between residential and recreational areas,” he says, adding that the residential offering in this area will hopefully be more affordable than in Bjørvika, though this will “depend on the political will”. When a project is this long term, you can afford to make adjustments, he says. Filipstad won’t be complete for another 20 years. 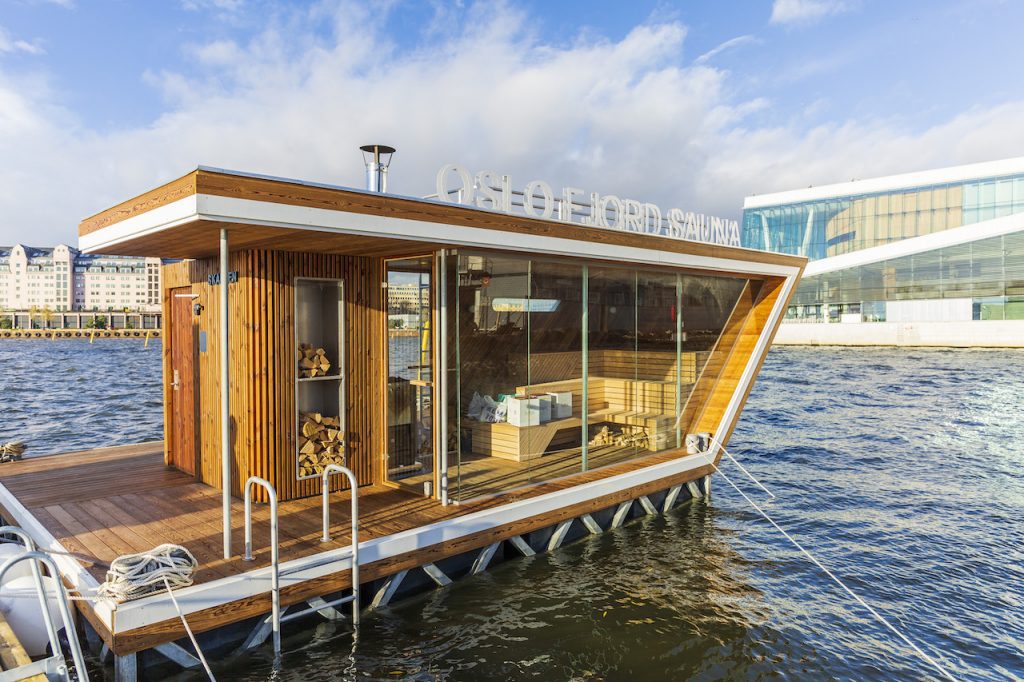 In the meantime, the popularity of the waterfront and its high-profile cultural institutions will undoubtedly continue to grow. But it may be the less obvious and more low-key aspects of the redevelopment in Bjørvika and beyond – such as the new public spaces, the medieval park to the east or the two new bridges (one pedestrian) over the city’s railway tracks – that end up being just as profound and transformative for Oslo as a whole. That is to say: a city that had been cut off from its fjord, but also divided between its eastern and western parts, is slowly becoming more permeable, more accessible and a lot better connected. And that’s something to talk about.

For more on Bjørvika, MUNCH and the Oslo waterfront see: Visit Oslo

22 October 2021 / Giovanna Dunmall is a London-based journalist who writes about architecture, design and the arts for publications such as Wallpaper, Azure, Metropolis, South China Morning Post, The National and Conde Nast Traveller. Categories