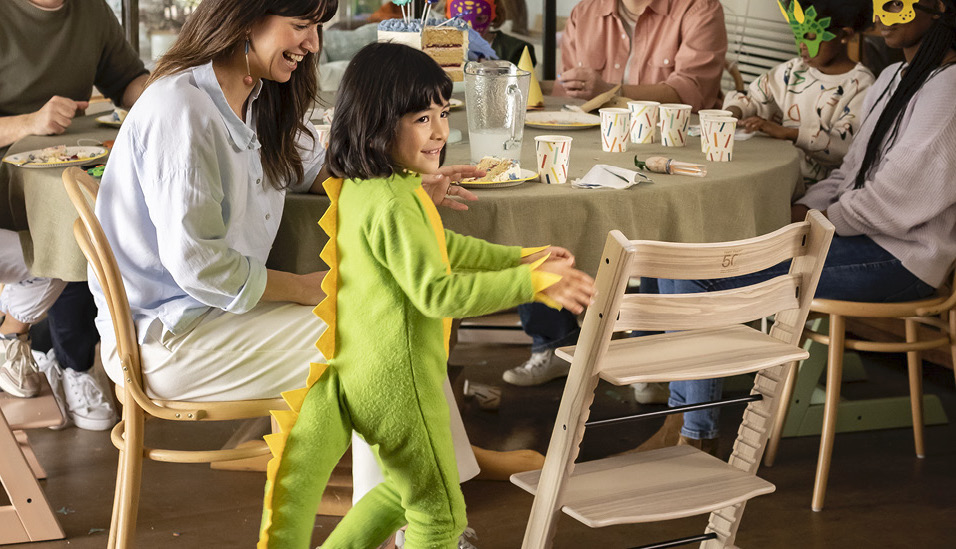 On his website, Norwegian industrial designer Peter Opsvik provides a little film he made in 1975. In it a woman sits on a chair at an oversized table that barely comes to her neck, a scenario sort of like Alice in Wonderland in reverse. Next you see a child sitting at a table with a huge pile of books under his bottom, his feet and behind his back, so that he is at the right height for the table. It looks fun but also uncomfortable and precarious. Finally, you see Opsvik himself assemble a very special slanted children’s chair, with a footrest and seat, and place a young child on it who is effortlessly at the right height for the table. 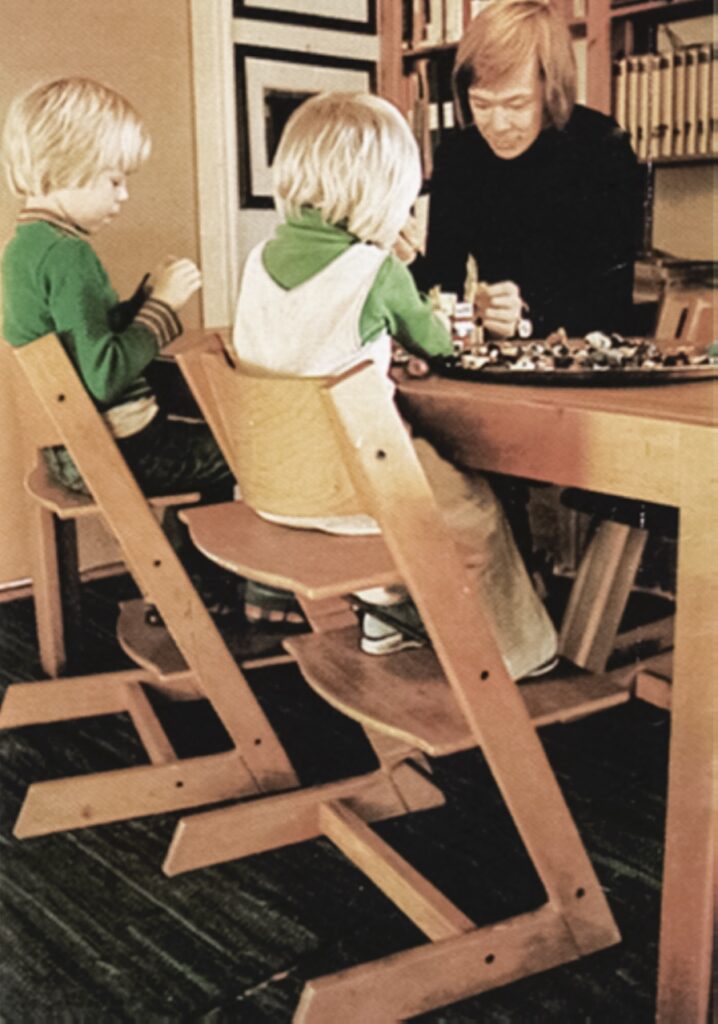 It’s a simple, grainy and dated video, but it’s a humorous and empathetic way of presenting a design – and family – problem: what should children who have outgrown a high chair but can’t yet sit on a regular chair do? Should they put up with an unreachable world of adults and bigger kids, a world they can only peer at from below? Do they have to be seated on dozens of telephone directories to be able to ‘join in’ at mealtimes? Opsvik searched high and low for an existing solution on the market and, when he found none, he designed one himself. Enter the Tripp Trapp chair.

Even if you haven’t heard the name before, you will have seen one of these chairs. Shaped like an incomplete letter Z, or a slanted letter L, to provide stability should a baby push themselves away from the table, it features a minimal geometric timber frame. Designed to be adjusted for seat and footrest height and depth, the main concept behind the Tripp Trapp chair is that it grows with the child and allows children an all-important seat and place at the family table. By reducing the height difference between the kids and their parents and allowing them to sit together at the same eye level, family life should become more relaxed and rewarding. Kirsti Vandraas, a physiotherapist and ergonomist who works closely with Opsvik, describes this transition as “getting used to being part of the flock”. 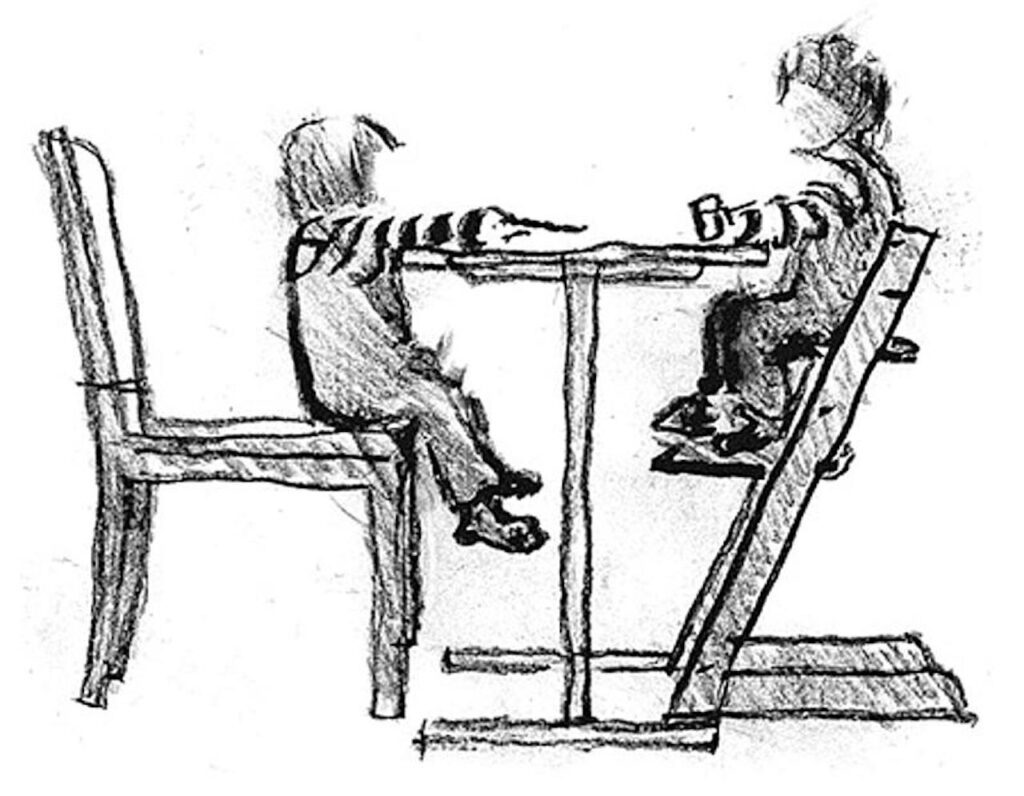 Importantly, the chair allows for freedom of movement. “Peter realised early on that when people are allowed to move, they move,” Vandraas says. Opsvik has never believed in chairs that you can only sit in one way, she continues, in fact he is famous for saying “the best sitting position is always the next one”. Moving around is only possible in the Tripp Trapp because of Opsvik’s focus on the feet, which he calls the “ignored extremities in ergonomics”. Unlike most chairs for kids, which allow the legs to hang in mid-air, the Tripp Trapp features a broad and solid foot support that allows the child to change sitting posture and gives them control over their movements.

Designed in 1972, this unconventional and innovative chair turned 50 this year. The past half a century has seen it become a perennial bestseller, with over 13 million chairs sold to date in over 80 countries and a growing popularity in markets where it has sold modestly in the past, such as the US and the Asia-Pacific countries. The chair is considered so iconic that it can be found in the permanent collections of MOMA in New York, the Victoria and Albert Museum in London and The Vitra Design Museum in Germany. But it’s not the only ‘iconic’ chair Opsvik has designed. His highly varied portfolio of seating designs is a testament to all of the ideas listed above, as well as to his aesthetic expressiveness, something Vandraas attributes to Opsvik also being a visual artist and a jazz musician. 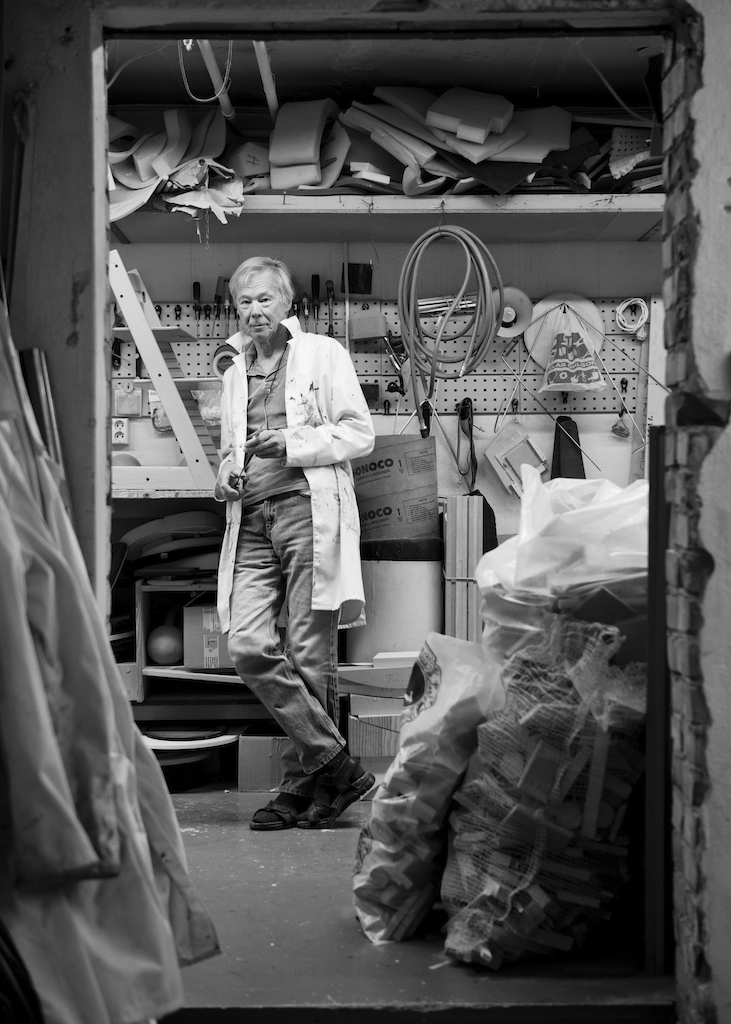 His artist’s eye is particularly evident in another famous chair of his, the Garden chair (1985), which features a sculptural tree-like design and upholstered back, arm and seat globes that encourage and incorporate as many sitting positions as possible. Peter’s son Tor, the little boy being put in the Tripp Trapp by his dad in the video, says that when his father gets an idea he doesn’t let go. “He won’t accept established views unless he understands why they exist. He always says that if you have an idea, it should be so good you can’t sleep at night.” 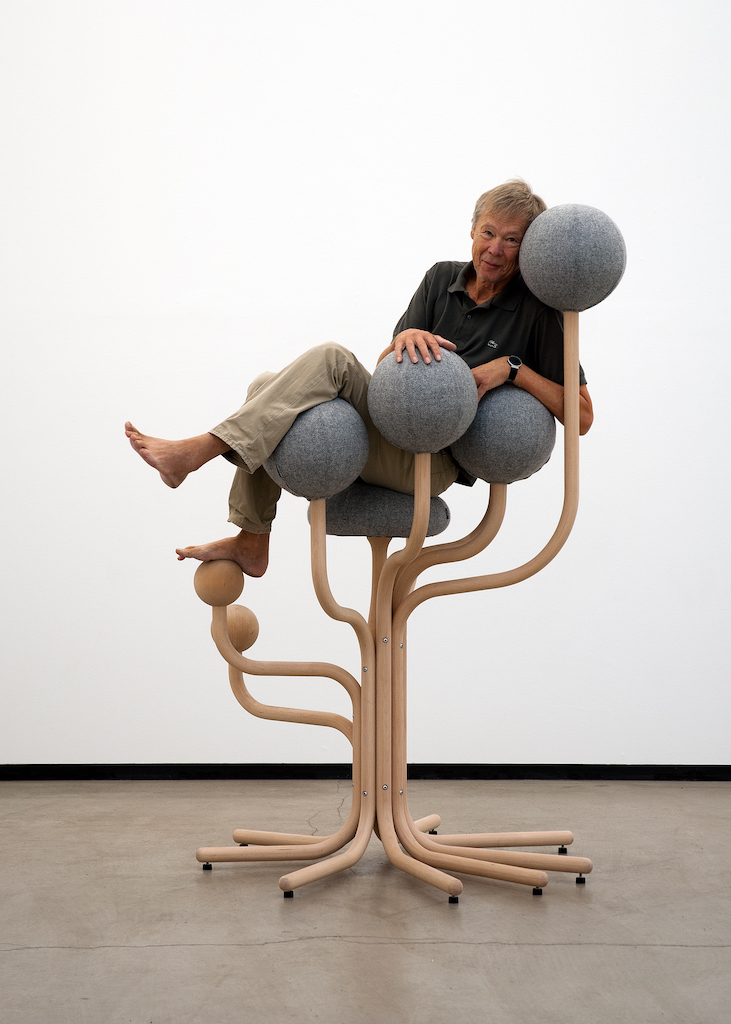 The Tripp Trapp is manufactured under license by the Norwegian furniture company Stokke; and it hasn’t changed in five decades, although some accessories have been added, some in response to changing safety standards. A plastic ‘baby set’ was launched in 2009, which provides back and side support for six-month-olds and upwards, and, in 2010, the ‘newborn set’ was introduced, a chair that is mounted on the Tripp Trapp that allows babies to be present at mealtimes from the beginning of their lives. In 2019, an upgraded version with an adjustable angle was introduced. But, despite these minor additions, the piece is still the same as it was in 1972, largely due to its good and typically Norwegian design, says Kimberly Bschor, Product Management Director at Stokke. “There is nothing on that product that isn’t there for a very clear reason, there are no trend elements. There’s a cleanness in the design approach that is typical of Norway and more generally of Nordic design.”

Though sustainability wasn’t a buzzword when Opsvik first designed the Tripp Trapp, it’s clear now that the chair was a pioneer and precursor in that sphere too. The spareness of the design, the durability of the design and materials used (European beech wood) mean that it chairs are often passed on from generation to generation and from family and friends to other families and friends. Bschor says that within Stokke they like to joke that “Stokke’s biggest competitor for the Tripp Trapp is secondhand Stokke”. In fact, many fans of the chair say it is much easier to find Tripp Trapp wanted ads online, than Tripp Trapps being offered.

So is there anything that this chair doesn’t get right, you might ask? It isn’t cheap but given how long it lasts that seems reasonable. A more legitimate criticism levelled at the chair is that it is not foldable, something people living in smaller spaces might benefit from. Bschor says that making the chair foldable is something the company has looked at more than once but that it’s just not feasible given the chair’s structure. Interestingly, the company has carried out research about parents’ desire for high chairs and children’s chairs to fold and found that it was mostly during the purchasing process that this request was voiced. “What we found is that nine times out of 10, even if you have a folding high chair, you won’t fold it at home and instead you will leave it at the table alongside all your other chairs. Your child is sitting in that chair for breakfast, lunch, dinner and snack times, why would you put it away?” 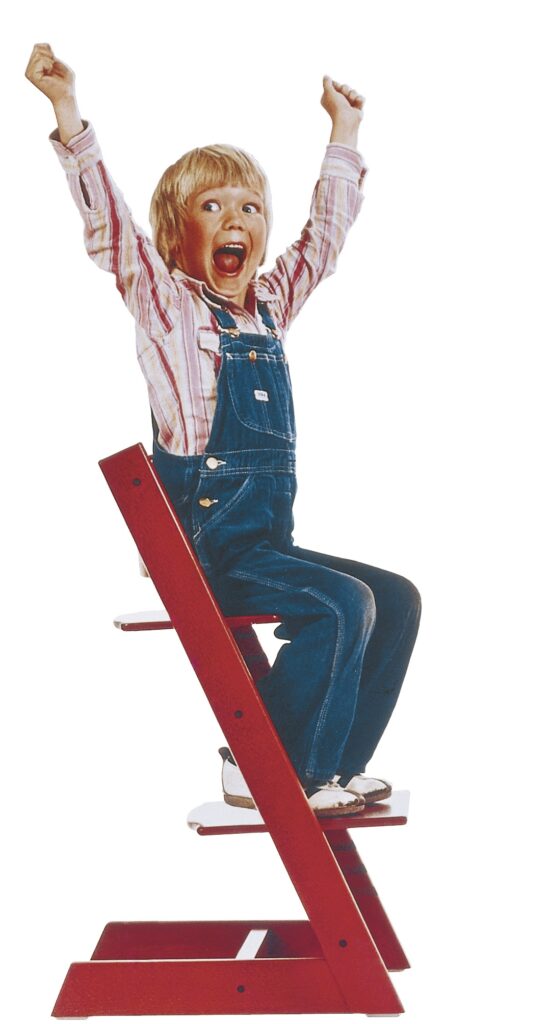 Despite being in his 80s, Peter Opsvik is still working on new and innovative seating ideas, says Tor. Currently, his studio in Oslo is working on a folding e-bike and also looking to design some dining room chairs that encourage movement, much like the Tripp Trapp, but that can be sold at an affordable price point so that people can buy six of them. “That’s an ambition or goal of my father’s,” explains Tor. It’s another sign that for Opsvik furniture design is about inclusivity and a non-elitist approach. It’s a winning formula, as the Tripp Trapp success story has shown.

For more information on the Tripp Trapp chair visit: Stokke

22 July 2022 / Giovanna Dunmall is a London-based journalist who writes about architecture, design and the arts for publications such as Wallpaper, Azure, Metropolis, South China Morning Post, The National and Conde Nast Traveller. Categories