For most people, Norwegian pop gem Cham Léon (aka Sondre Kittelsen Paalgard) is a well kept musical secret as of now, but that is about to change.

Recently announced as one of the first nine artists ready for by:Larm 2021, Cham Léon released their debut album on 23rd April, appropriately titled I (don’t feel like myself today). Throughout seven songs, we are taken back to the childhood and to the feeling of growing up and slowly losing ourselves. One of the songs on the album is Dice, this week’s Top Track.

Cham Léon released three singles in 2020; four, three and two, navigating in the landscape of pop, with inspiration from genres such as electronica, jazz, R&B, film scores and classical music.

“Through music I want to inspire, excite and surprise, as well as providing a message of equality, acceptance and love,” they say. 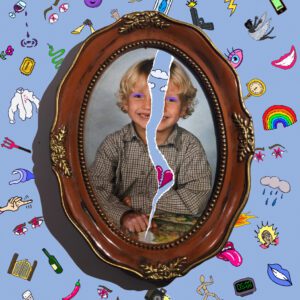 Artwork for the album I (don’t feel like myself today) created by Cham Léon.

For a large part of their life, 24-year-old Cham Léon has felt the need to adapt to their surroundings and finding it difficult to feel a sense of belonging. Art is their way of dealing with this, creating a safe space where stereotypes and norms are set aside.

They have created a gender-neutral universe, an inclusive space, based on a whole range of different artistic expressions.

Their stories are told through music, artwork, illustration, acting, design, styling, video, live – and the list goes on.

“I want my music to feel like an escape from reality. I want everyone to feel welcome, regardless of how you define yourself,” Cham Léon say.

Dice and the debut album I (don’t feel like myself today) are both out now on Little Big Music.