The Painter and the Thief: An Exploration of Human Connection

When a drug addict stole a painting from an Oslo gallery in 2015, a chain of unlikely events were set off that would culminate in The Painter and the Thief, one of the most successful Norwegian documentary features of recent years. Marte Eide talks to its director Benjamin Lee about the redemptive nature of art and friendship.

Like most viewers, I was intrigued by the premise of the documentary The Painter and the Thief: an artist has two of her artworks stolen and then wants to paint a portrait of the thief. Two strangers with completely different starting points: Barbora Kysilkova is a Czech painter, living in Oslo and struggling to make ends meet; Karl-Bertil Nordland is a Norwegian thief, struggling with drug addiction. “I started this project wanting to explore the contrast between them. As it turns out, they’re very much alike: passionate, direct, sensitive and multi-layered,” says director Benjamin Ree from Oslo.

“For me, filmmaking is about asking intellectually stimulating and emotionally engaging questions through observing human behaviour. That’s why I’ve made a movie that asks the complex questions around such a unique and complex relationship as Barbora and Karl-Bertil.” At 31, Ree is one of Norway’s most talented young documentary filmmakers. The Painter and the Thief is the first Norwegian feature documentary to be invited to the prestigious Sundance Film Festival. Ree’s road to becoming a full time filmmaker has not been straightforward, however. For years he made short documentaries while also working as a journalist. At 23, he embarked on his directorial debut: a feature documentary about the world chess champion, Magnus Carlsen. “His feelings were hidden on the inside; rarely, if ever, shown,” Ree recalls. “The big challenge was to find a visual form to convey those veiled emotion.” The documentary Magnus premiered at the Tribeca Film Festival in 2016 and sold to 64 countries. 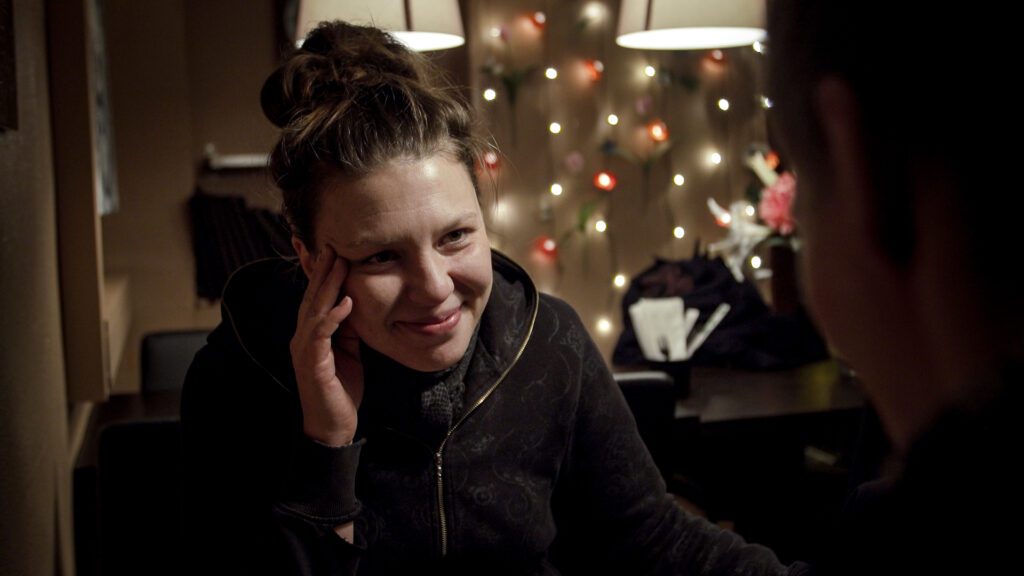 Following the success of Magnus, Ree began looking for his next project and found a story in the news. At Gallery Nobel in Oslo in 2015, two thieves meticulously stole two paintings, Swan Song and Chloe & Emma, by the then little-known Czech artist Barbora Kysilkova. The thieves were caught and sentenced to 75 days in prison, but the paintings remained missing. One of the thieves, Karl-Bertil Nordstrand, showed up for trial, and Barbora saw an opportunity to meet him. She recorded the audio of their first encounter, asking if she could paint his portrait. “I got really lucky that so much material already existed before I started the project; the surveillance footage, film of the making of the two pictures that later got stolen, and the exhibition itself,” Ree says. 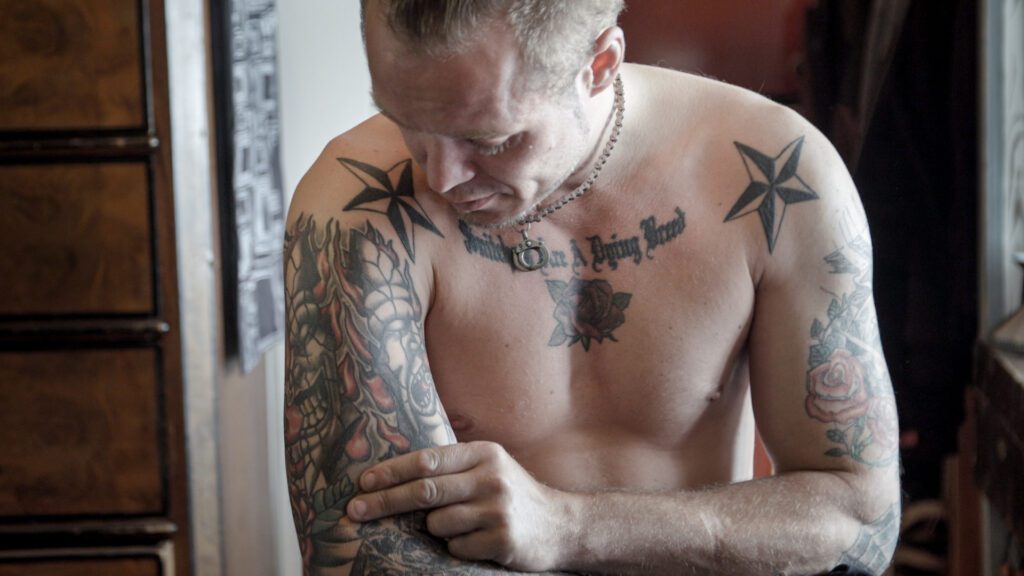 Ree asked Barbora if he could film her painting the portrait of the thief who stole her paintings, Karl-Bertil. “I thought the premise was very exciting, of her painting him. When I first got access to begin filming, it was about the fourth time they had met.” The plan was for it to become a 10-minute short documentary for VGTV. “I thought the movie would end once he had seen himself being painted and that’s it. I had no idea they were going to become friends. I did not know anything about where the story would go. It just kept growing.”

The painting of the portrait turned out to be just the beginning of something that would become a unique, beautiful and at times difficult friendship between the painter and the thief. Him, an addict wanting to be seen but also quite sceptic of the world. Her, drawn to his darkness, inspiring her artistically. Would the pair be able to move on from the fact that he had stolen her painting, and had no recollection of its whereabouts? Filming continued for 3 years, a collaborative project relying on the director and his camera assistant to be available at short notice. “When something was happening, I had to drop everything, and cancel plans, to travel to wherever they were.” 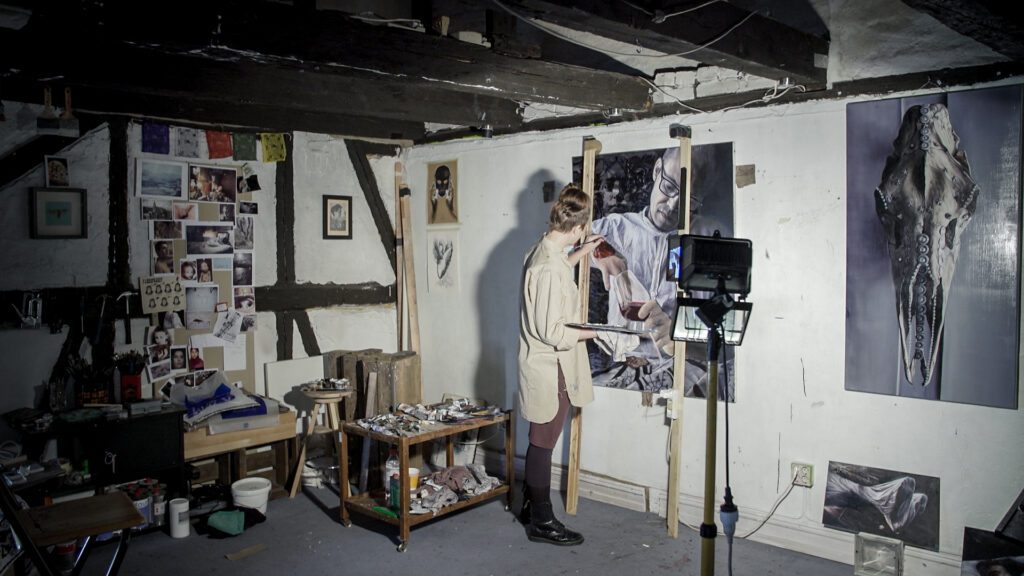 The three of them had many conversations about the kind of story they wanted to tell. “Barbora and Karl-Bertil have both been poor and hungry, and have come to me to have lunch,”Ree says half-jokingly. “That has given us the opportunity to talk about film creation, what this film is about and how we want to show it. They’ve been a part of the filmmaking process and I believe that inclusion has given me even better access to their lives.” A friendship grew between the director and his subjects. “I’m very fond of both, and they’re still my friends today. Our friendship has changed over time, it’s a different relationship when I’m there filming, and has grown a lot more once I put the camera away.”

One of the film’s main characteristics is its non-linear storytelling with the two narrator perspectives jumping back and forth in time. “We realised early on what the film would be about: What do we humans do to be seen and appreciated, and what does it take to help us see others? It then became very relevant to see their view on each other and on each scene, to have both of their perspectives.” It is an effective way to show the stories of the two characters, while also revealing new elements of their friendship throughout the film. It starts with the presumably strong party; the artist Barbora. Once we have seen her perspective, the story rewinds and shows the same meetings from the more fragile Karl-Bertil’s point of view. Building the documentary this way gives it layers and complexity that linear storytelling would have missed. “This choice was largely based on us wanting to portray Karl-Bertil’s complexity, to show how funny, charismatic, intelligent, destructive and dark he is. We felt that the only way to do that would be to see the world from his perspective.” 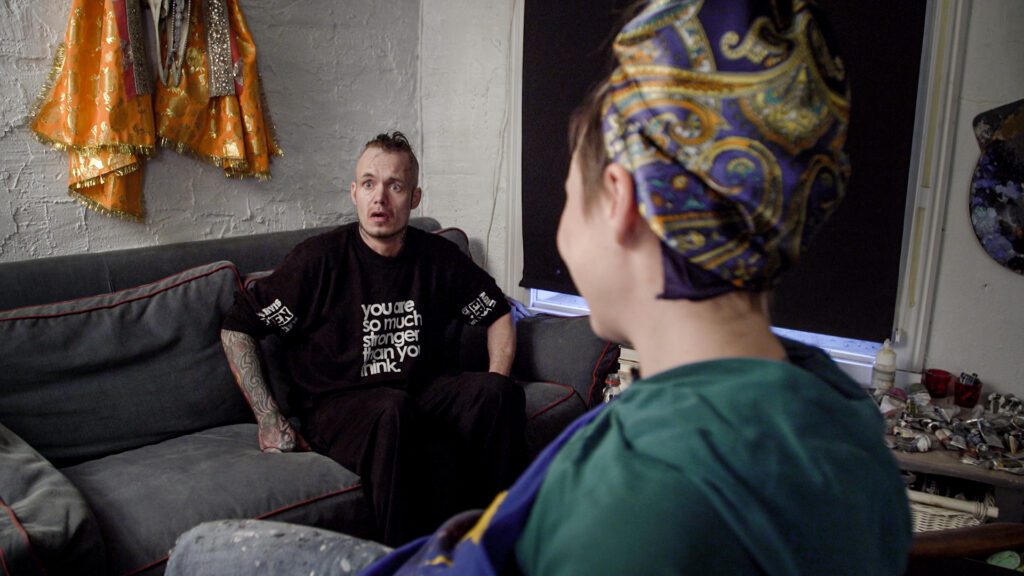 The Painter and The Thief does not shy away from intimate and personal moments. From difficult childhoods and past traumas, to the struggle of paying bills and attending therapy, both Barbora and Karl-Bertil allow the audience to see their lives unfold. “If you have access to film people over a longer period of time, something is always bound to happen. Just thinking about my own life five years ago, so much has happened since then,” Ree says. It was especially important to portray drug addiction properly. “I’ve had many conversations with Karl-Bertil about wanting to portray drug addiction, and the uncomfortable truth around it. There have been enough films that glorify drugs. This film shows what happens once the party is over. When you’re about to die because of your addiction.”

In the film, Karl-Bertil goes through an incredible journey, that sometimes sees him in a pit of despair and other times offers a glimpse of hope. “The fact that Karl-Bertil manages to raise up physically and mentally is first and foremost thanks to himself, and his own resilience. Nobody else can make those choices for him. He has worked so hard on himself, it’s important to realise how demanding it is for someone to change the way he has,” Ree observes. 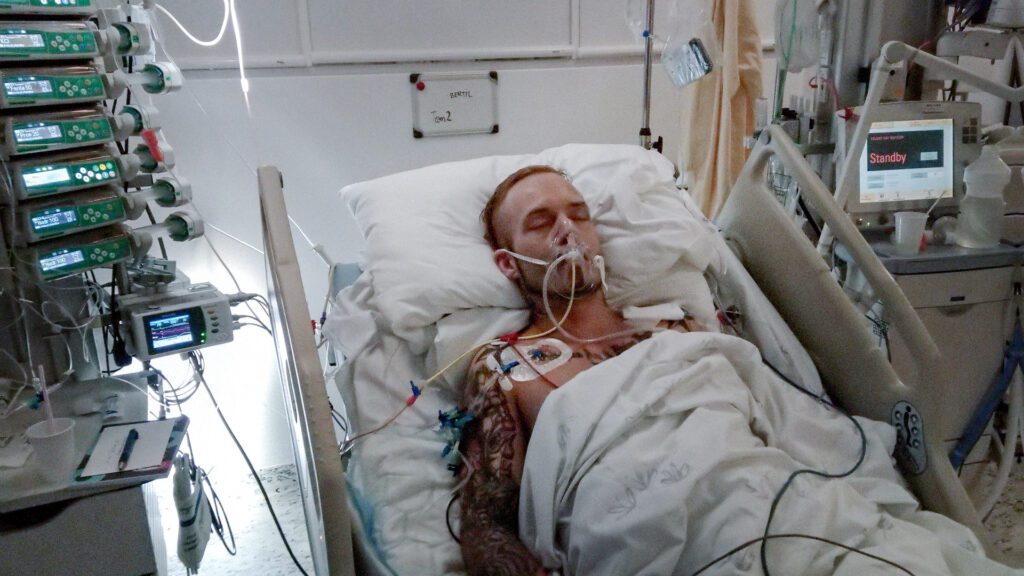 Barbora comes with her own complicated background. Having moved to Norway to be with her Norwegian partner, she is a struggling artist living from hand to mouth. When her two paintings go missing, it’s her need to find them that moves her story forward. The connection between her own struggles and her attraction to darkness becomes clearer as the film progresses, portraying a type of woman we don’t see too often on screen. “Barbora is extremely talented, self-destructive, complex, dark, funny, warm and open. She puts her art first, it’s the number one most important thing in her life, above everything else,” notes Ree. “It’s very liberating to portray a woman who is completely uncompromising about her artistry.” Viewers can see how pain, darkness and death are elements that inspire her to create art, something that her Norwegian partner has a hard time to reconcile with. 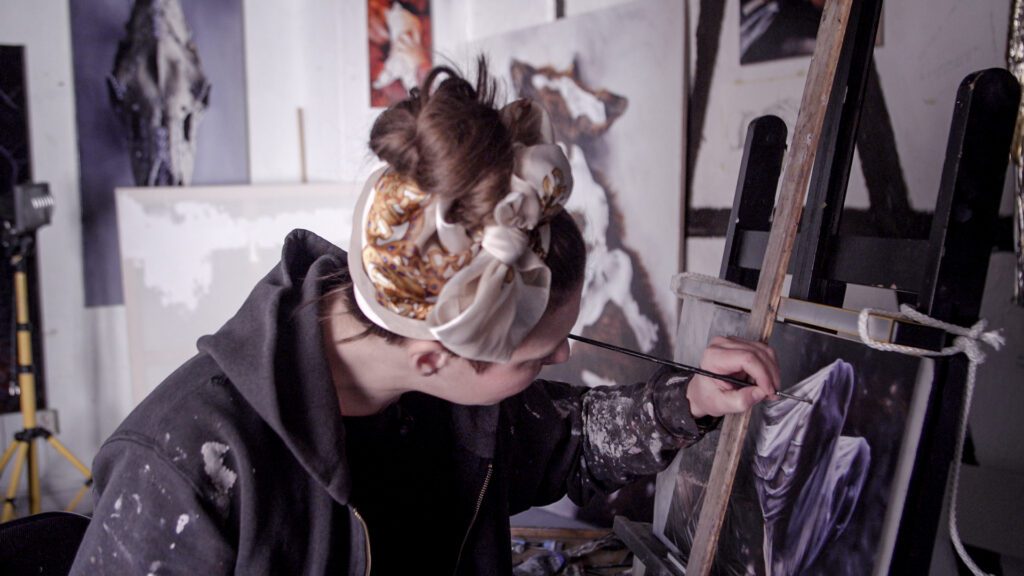 Barbora Kyslikova in The Painter and the Thief (Photo: Neon)

I wonder if Ree recognises himself in Barbora’s dilemma of using pain and suffering to create art. “Absolutely. Is it OK to use suffering to create art?” Ree asks. “The big dilemma of being a documentary filmmaker is that when you get good material it often is of people suffering. In those situations, I often feel sorry for them and empathise, and at the same time I’m happy to get good content. It’s a challenging and contradictory feeling.” 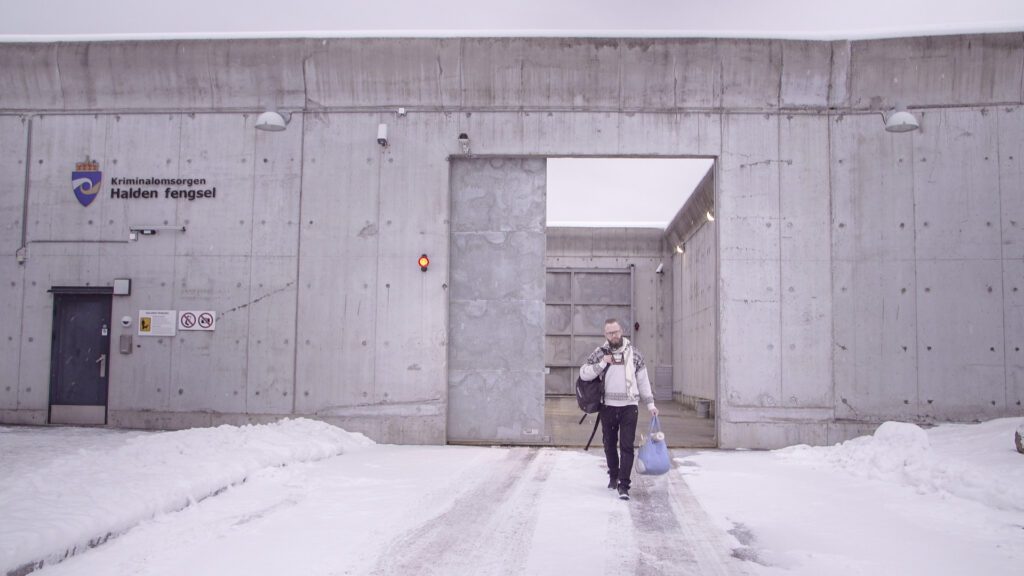 Dramaturgy in documentaries is about making both artistic and ethical choices. “When should you put the camera away and give the person a hug instead? When should you continue filming and not influence the situation?” Ree wonders. “These are real people, living in the real world, who have to live with this movie afterwards. It’s important that the portrait of them is nuanced and representative.”

Ree shares one of his favourite scenes from the film, towards the end where Karl-Bertil gives Barbora advice. “It’s brilliant. Who would have ever imagined?”

Before the launch of The Painter and the Thief these were two people going about their lives. Now, Barbora’s art is getting international attention and Karl-Bertil is counting not days, but years of being clean. “Karl-Bertil receives messages everyday of people who have seen the movie and his fight to change. That’s the best feedback we can ever have, that the film has made a difference in someone’s life,” Ree says. 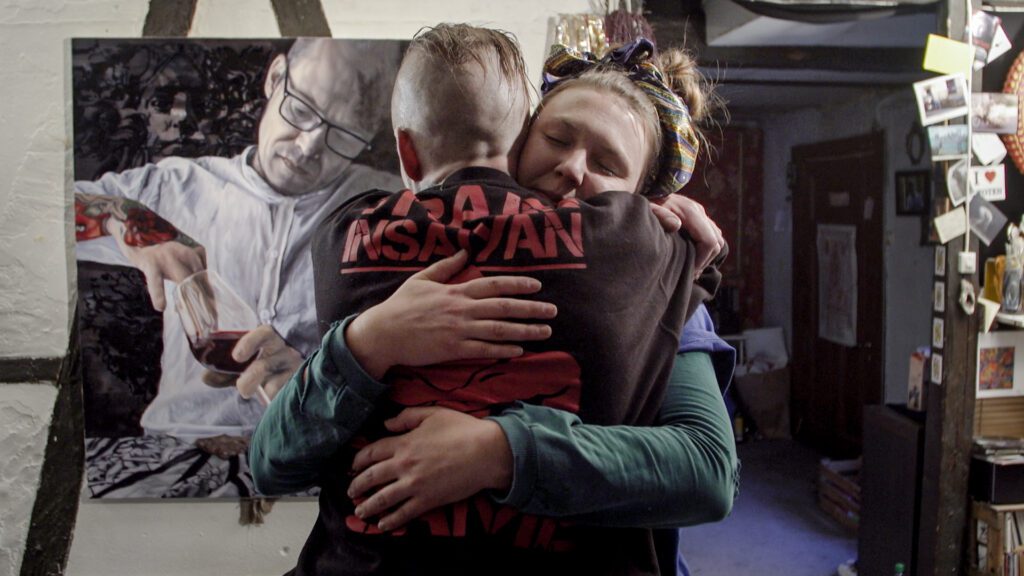 Their story comes full circle in a moving and unexpected turn of events that leaves the audience with unanswered questions. “I was lucky to get this ending. I did not expect it at all. I hope the audience is just as surprised as I was!” says Ree.

The Painter and the Thief  premiered in UK 30thOctober 2020. See https://www.thepainterandthethief.co.uk for more information and on demand platforms.

6 November 2020 / Marte Eide is an arts and communications adviser at the Royal Norwegian Embassy in London. Categories