“I was really struck, when I read the translation of it, of how unpretentious Jørn was in his de-mythologising of so much. He’s not giving any excuses for who he is and he makes no excuses for some of the lame aspects of what his friends got involved with: ‘We were just kids in a band, and that’s all there is to it’. He doesn’t pretend to be anything he’s not.”

Known mostly by his assumed moniker, Necrobutcher, Jørn has been an uncompromising and forthright fixture in the Norwegian musical underground since Mayhem formed in 1984, famously turning down interviews and telling journalists to, well to put it politely, not bother him.

While the black metal inner circle hail Mayhem as one of the most important bands of the genre, celebrating their 1994 album De Mysteriis Dom Sathanas as the pinnacle of black metal’s so-called second wave, his band have been a fascination of those outside the genre as a black sheep of Norwegian culture, a band steeped in myth and mystery. But now Jørn has lifted the veil on Mayhem’s early days through an autobiographical photography book, The Death Archives: Mayhem 1984-94, released through Moore’s publishing house, Ecstatic Peace Library.

The book itself is an intimate insight into the early days of Norway’s most notorious band, but if you’re looking for scandal, sensationalism and sordid debauchery you will be disappointed. Jørn reveals his truth, and his truth is that, like most other bands setting out on a rock and roll journey, his is a story of friends getting together in a garage to play music and emulate their heroes, in their case early extreme metal progenitors Venom and Celtic Frost. It’s a story of innocence and adventure, of Euronymous preferring to drink Coca-Cola to alcohol, of inter-railing around Europe to distribute their hand-made demo tapes, of narrowly avoiding the wrath of British skinhead punks and sneaking in to quietly listen to a legendary John Peel radio session with their friends in Napalm Death.

When you think of Mayhem, you think of the negativity that rose around the band in the early ’90s regarding church burnings, the tragic suicide of their singer Per ‘Dead’ Ohlin, and eventual murder of guitarist Øystein ‘Euronymous’ Aarseth. You don’t think of four teenagers struggling with language barriers and their disappointment of ordering pizza with octopus on it in Italy. The Death Archives: Mayhem 1984-94 strips down all your preconceived notions of the band known as The True Mayhem. The book makes this band of mythological misfits seem human, seem real and seem like us.

This is where Thurston Moore comes into the picture. How does one of the most famous rock guitarists in the world, ranked by Spin Magazine as #1 in 2012, come to collaborate with a black metal iconoclast to publish an English language version of his book. It starts in 1991.

“I put out a Venom 7″, that’s my claim to fame in the black metal world,” laughs the man who now lives in London with his publisher/girlfriend Eva Prinz, of a live single he released for the British band who coined the term Black Metal. “I was always a Venom fan iand I remember one Sonic Youth gig, I was wearing a Venom t-shirt on stage and some indie rock kids came up to me and said ‘Are you taking the piss?’. Venom to me was as interesting as any of the more experimental punk rock bands I was listening to in the ’80s.” 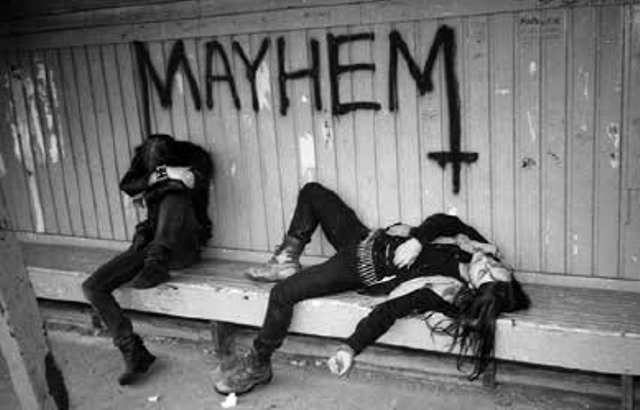 Thousands of miles away from New York, Jørn Stubberud was on the same trajectory, weaving Venom’s post-punk thrash metal into what would become the sound of Mayhem. And while Jørn was creating his music, Thurston Moore was becoming increasingly interested in black metal, collecting as much as he could over the years. “I had heard about it last year,” he says of the Norwegian version of Jørn’s book, which was released in 2015. “I was doing interviews as I had some gigs coming up in Norway. They said ‘I heard you’re a fan of Norwegian black metal’, and I get this a lot. I’ve publicised my fascination with it and it’s a genre of music that I was really immersed in. I got more curious about the groups that were making the most confusing sounding noises under the banner of black metal, that stuff was really great and I knew that it all came out of Norway. I was told about this book and I couldn’t believe it. I thought ‘I have to find this’ and as I was touring through Norway last year I would look for it. I was in Stavanger and my girlfriend found it in this tiny CD store on the main street. I was completely fascinated but of course I couldn’t read it. My girlfriend is my partner in Ecstatic Peace Library and she’s worked for Taschen Books so she knows what she’s doing and she said this would be a really great thing to publish. We got it translated and I was surprised at how down to earth it was.”

Having not been able to originally read the book, Thurston, like many, assumed this book would shine another spotlight on the more illicit aspects of the band. The translation was illuminating. This has nothing to do with those elements and Jørn himself is relieved that this side of the story has finally been told. Praising him for his integrity and candid story-telling, he says that “It came out the way I was hoping, that the reader would pick up on that. That I could tell the story of what actually happened from my perspective. It’s going to be very interesting because I have never met Thurston before. And I’ve never listened to his band, Sonic Youth. I think at first he misunderstood me completely. I read his first press release about the church burnings, everything this book is not about. Now they understand, this book has nothing to do with that reputation at all.”

Jørn is an uncompromising as ever, do not mistake his revelations of teenage Coca-Cola addictions and backpacking through Europe as an admission that he and his band are anything but the most dangerous band on the planet, but he is ready to tell the world, on his terms, that his Mayhem have nothing to do with the scandals surrounding the band in the early ’90s. In fact, as Thurston is quick to point out and praise Jørn for, he had left the band in 1991, after an altercation with Euronymous regarding the photographing of Dead’s body after he had killed himself; a photo that has since been published on bootleg record sleeves and in magazines the world over. Jørn is a man of steadfast values and that he left the band he formed over something he still believes was insensitive and unforgivable shows a man unwavering in his beliefs. Of course, Jørn was replaced in the band by a new bass player known as Varg Vikernes and as he says in his book, ‘that’s another story’. “It’s interesting to hear him talk about the only time he met Varg was when he came to borrow his bass amp,” says Thurston. “He hears the chains on Varg’s pants clattering on the stairs and sees this kid. He probably saw him hanging around at Euronymous’ record store but I got a feeling he doesn’t even talk so much about that, because he doesn’t hang out there. In a way he’s interesting because he’s got some modicum of responsibility; he has a relationship, he has a child, he has a job. You realise when he’s writing that this is who he is. How he hears on the first day of his new job about this murder and realises it’s his friend and how that affects him and how he has his wife at home who’s pregnant and that’s his first concern. These boys he’s playing music with are actually getting involved in some really fucked up things and he just wants to be in a band.”

To hear these stories is a view into a world of Mayhem rarely exposed and Thurston’s enthusiasm to release this tome into English is welcomed by the author. “First, it came out in Norwegian, and that was more surprising to me,” Jørn reveals. “I always saw it as an English book, because with Mayhem, very few percentage of our fans are Norwegians. I thought it might be translated to Norwegian and that’s going to be good, but I want it to be translated into 65 different languages, but we’ll see about that [laughs].” 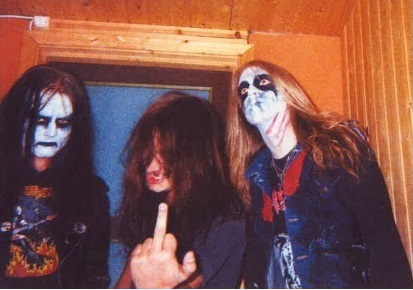 On future plans, Jørn says the story is far from over. “It says on the front of the book, it’s the first ten years. It ends with the line ‘Thats another story‘, regarding what happened after 1993, when we started again. That’s going to be my next book. Naturally it was be good to go out with the next 13 years of Mayhem, the era until Maniac and Blasphemer leave the band and Atilla and Teloch come in, in 2005. Then there will be the third book, but that’s years from now. Others are still writing books, I can’t control that but this is my counter answer to the bullshit that’s going on with the films and books that are coming out. It’s going to be interesting, the journey we just started. Now all these films are coming out, the one based on the Lords Of Chaos book [an infamous account of the church burning and murders that put Mayhem in the spotlight in the mid-1990s]. There will be the time to tell it how it is sometimes and this is one of the times that you say, ‘Hold on, this is what happened’ and take it from there.”

The book is an incredible account of a world few know and will delight fans of black metal but also anyone interested in the life of Norwegian musicians in the pre-internet world of tape-trading, travelling by train and letter-writing. It is a diary of a man with a mission to play music, whatever the cost, a mantra he has not wavered from in 30 years and will continue to do so for many years to come.

An exhibition of photography by Jørn Stubberud along with the book, is open until June 8 at Tenderbooks in London’s Cecil Court www.Tenderbooks.co.uk. You can purchase The Death Archives: Mayhem 1984-94 at Tenderbooks  and at Antenne Books.

The Death Archives: Mayhem 1984-94 is translated to English from Norwegian by Jan Bruun and Victor Szepessy.