In the extremities of northern Norway a group of architectural studios are blending nature with nurture in their ecologically-minded projects. Oliver Lowenstein visited the region to see how birdwatching and boats fit into the picture.

At the far edge of Norway’s spiny shoreline lies Vardø, looking out at the icy Barents Sea and beyond, to the Arctic and the North Pole. Vardø is one of the most north-easterly towns in the country. This might not suggest itself as somewhere to go looking for an intriguing departure in sustainable architecture – the practice of minimising the environmental impact of buildings. But something unusual has been unfolding in the town. 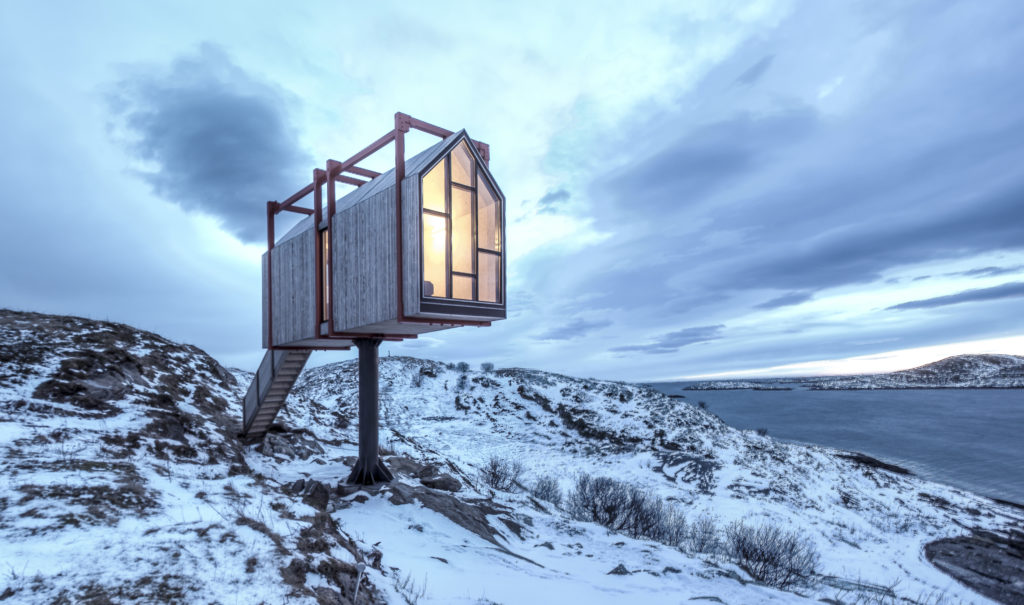 I recently travelled across northern Norway – eventually reaching Vardø – discovering how questions of architectural sustainability fare in the High North. Unsurprisingly, I was impressed by how large, yet sparsely populated, the region is. Its three counties – Nordland, Troms and Finnmark – cover nearly 44,000 square miles, but have a population of less than half a million people. With a relatively modest building culture compared to Oslo, inevitably there are fewer architects practising across the country’s High North; and conditions for sustainable architecture are different from those in urban contexts.

But there are idiosyncratic studios here with a focus on sustainability. Three examples are: Tromso’s 70°N arkitektur; Bodø’s Sami Rintala (partner in Rintala-Eggertsson Architects); and, at its most pronounced, Vardø’s Biotope. Each offers its own alternative approach to sustainability. 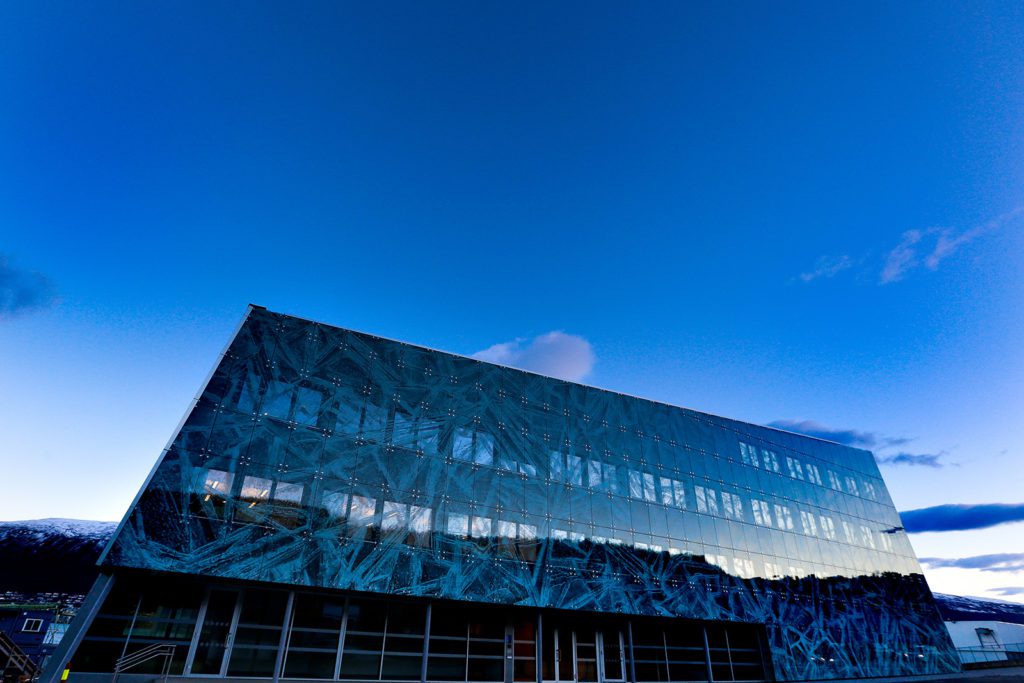 Founded by Gisle Løkken in 1995, 70°N arkitektur was responsible for Trofi Teknopark, Tromsø’s first office building built to ‘passive house’ standards to reduce its ecological footprint. The studio has been involved in shaping urban-living practices to avoid the city from sprawling into the surrounding landscape (including research on the complexities of the landscape of the Lofoten archipelago). Studio partners Magdalena Haggärde and Gisle Løkken have also been involved in the Landscape Architectural and Ecology MA, a collaboration between the University of Tromsø and the Oslo Architecture School (the first course in the Nordic region to integrate ecological systems into architecture).

Meanwhile, Bodø’s Sami Rintala has influenced a wave of young architectural students. Rintala Eggertsson Architects is known for its art-architectural installation set-pieces, staged all across Europe. But it has also been busy in and around Bodø, helping to create Arctic Hideaway – a cluster of boutique cabins on the island of Fleinvær – and the Bodøsjøen open-air boat museum, home to the Anna Karoline, the last surviving Nordland sloop – or “jekt”. 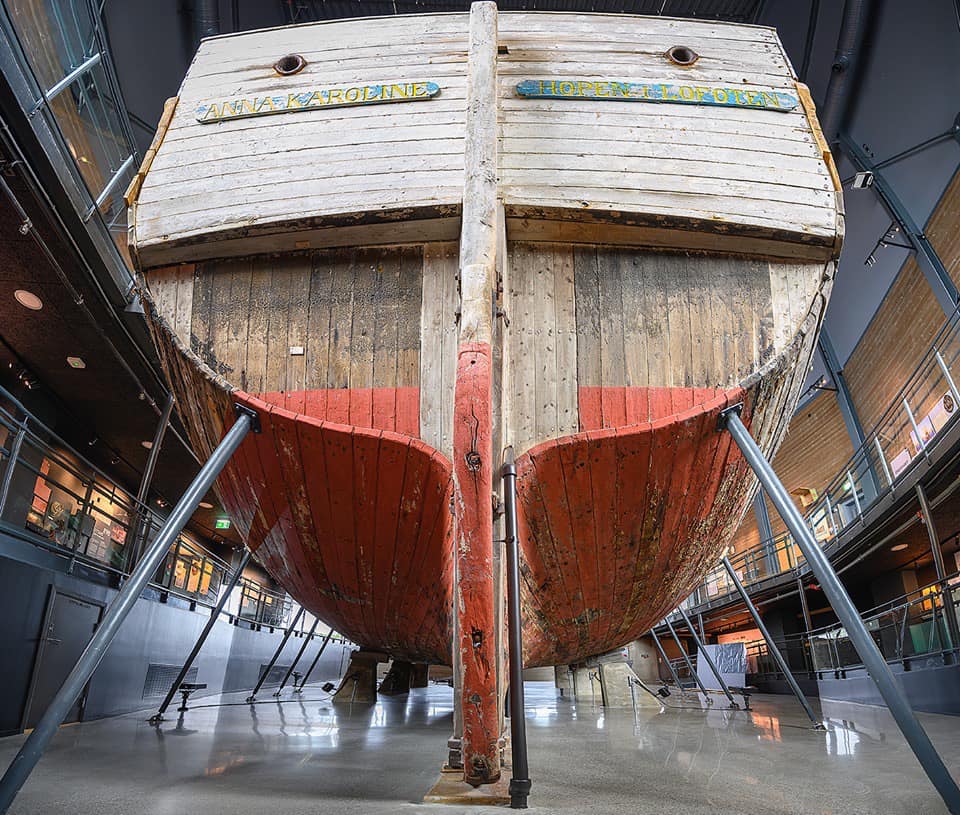 Though these have brought international recognition, it is Rintala’s influence on students at NTNU (Norwegian University of Science and Technology) – particularly through running workshops – that has, perhaps, made the greatest impression. These students have taken their ‘hands-on’ and sustainable approach to studios such as TYIN tegnestue Architects, Nøysom Arkitekter and Rallar Arkitekter.

In recent years, Rintala has worked with Norwegian boat-builder Jan Godal, who eschews electric power tools in favour of saws and axes. One senses that this pragmatic, skills-based sustainable approach has been influenced by making his home in his northern Bodø perch. 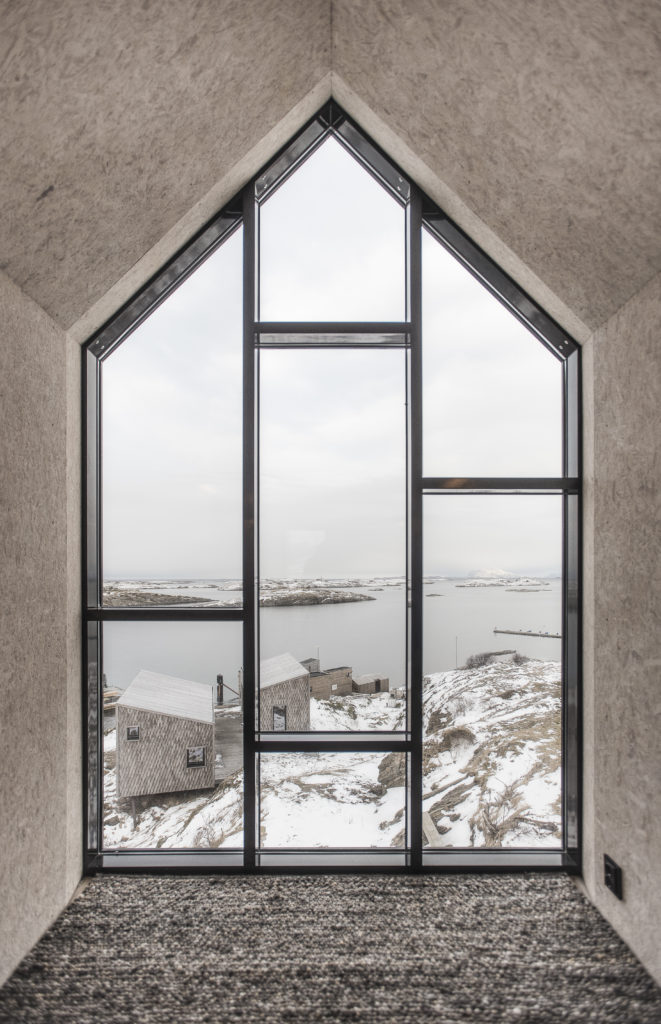 Yet, of the three, it is Biotope in Vardø, on the northern extremes of Finnmark county, which is addressing one of sustainable architecture’s most pressing questions: how to work with nature in the most effective yet subtle way? Tormod Amundsen, Biotope’s founder, is driven by his life-long love of birds. He knew that Vardø, and the surrounding Varanger Peninsula,was world famous among the birding community. Its micro-climate creates a wealth of bird culture. “Different species inhabit the island and the surrounding waters at different times of the year,” Amundsen notes. It is, he says, unique both in a Norwegian and a global context.

“I wanted to connect people with nature through architecture,” says Amundsen. “Vardø felt like a place with a lot of untapped potential.” He wasn’t quite prepared for what he found, however. The town was on the cusp of collapsing. “It was officially ranked as the worst community in Norway for business and development by the Norwegian trade and commerce organisation,” he recalls. Although rich in ecological culture, the collapse of the fishing industry during the 1990s had had a huge effect. Subsequently, the town’s population halved to just over 2,000.

Almost a decade on and Vardø is in the process of being rejuvenated, thanks in part to Amundsen and his studio. Other ventures – such as Vardø Restored, a development and cultural programme – have helped restore the viability of the town. Making the case for birdwatching tourism as part of a wider strategy to regenerate the region was a challenge. Working with the local community and international conservation organisations was pivotal. According to a report by the National Tourist Routes Agency (NTR) there was an 80% growth in tourism across Varanger region between 2010 and 2015.

In 2012, NTR commissioned Biotope to build a bird hide close to the Steilneset Memorial, a landmark monument created by Swiss architect Peter Zumthor and artist Louise Bourgeois, which commemorates the 17th-century Vardø witch trials. A further 16 bird hides and nature shelters followed, spread out across the Varanger Peninsula. These are valued by naturalists for their sensitivity to the immediate ecology, and the possibility they offer to get very close to the birds. Amundsen describes the enterprise as “minimal impact infrastructure”. Biotope’s future projects will, he states, have a similar ecological emphasis. 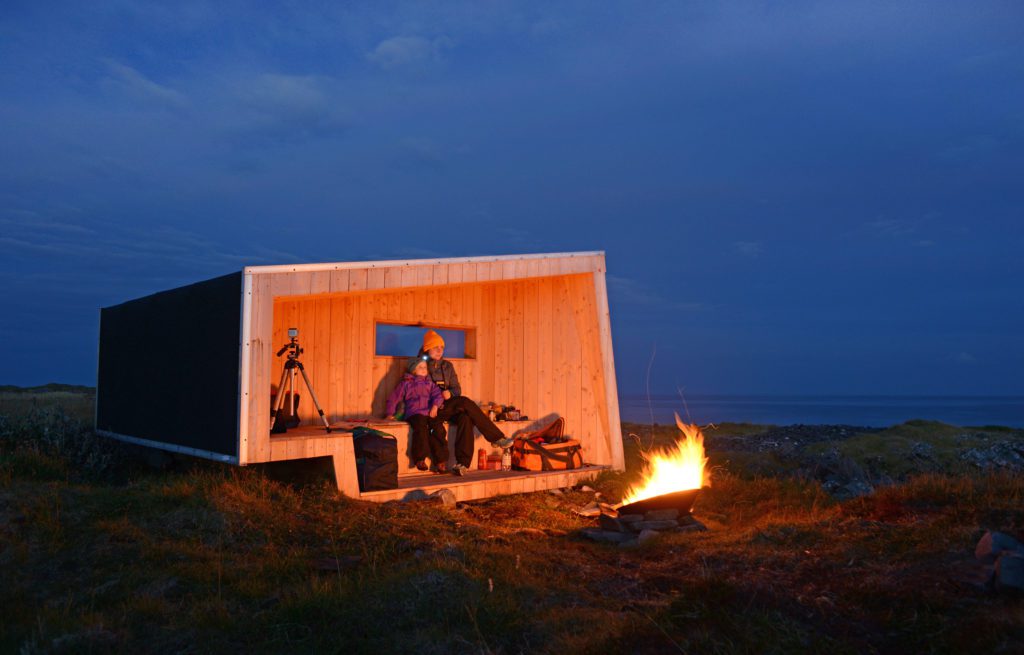 “We moved to Northern Norway to connect people to nature,” Amundsen says. “Though it drew birders and nature types and others closer to nature, it also helped show local communities the value of nature, and how to work with and respect nature.”

Biotope are now spreading their wings, with a new British office in the one-time Viking city of York. Their first UK designs were for hides at the Wallasea Island Nature Reserve in Essex which is run by the Royal Society for the Preservation of Birds (RSPB). There have since been two projects in Middlesborough. 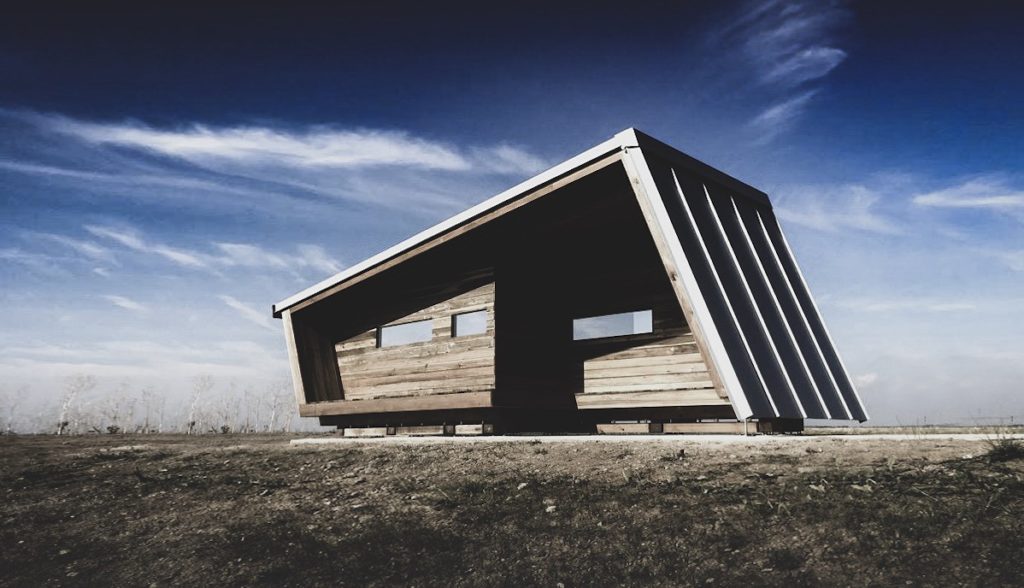 Amundsen is adamant that architecture can unite people and, in the process, educate them about nature. Here, architecture is a means towards an experience, not the experience itself. Rather than ‘starchitecture’, he says, “it’s about small-scale projects and about birds and nature and being outdoors. It’s just such a great way into understanding the ecological systems we’re dependent on.”

The world’s perilous ecological situation has again returned to the forefront of our attention. In Britain and other parts of Europe, reawakened concerns have shaken the architectural community, enough to acknowledge that they must do more. In the UK a group of architects recently released a Climate and Biodiversity Declaration. 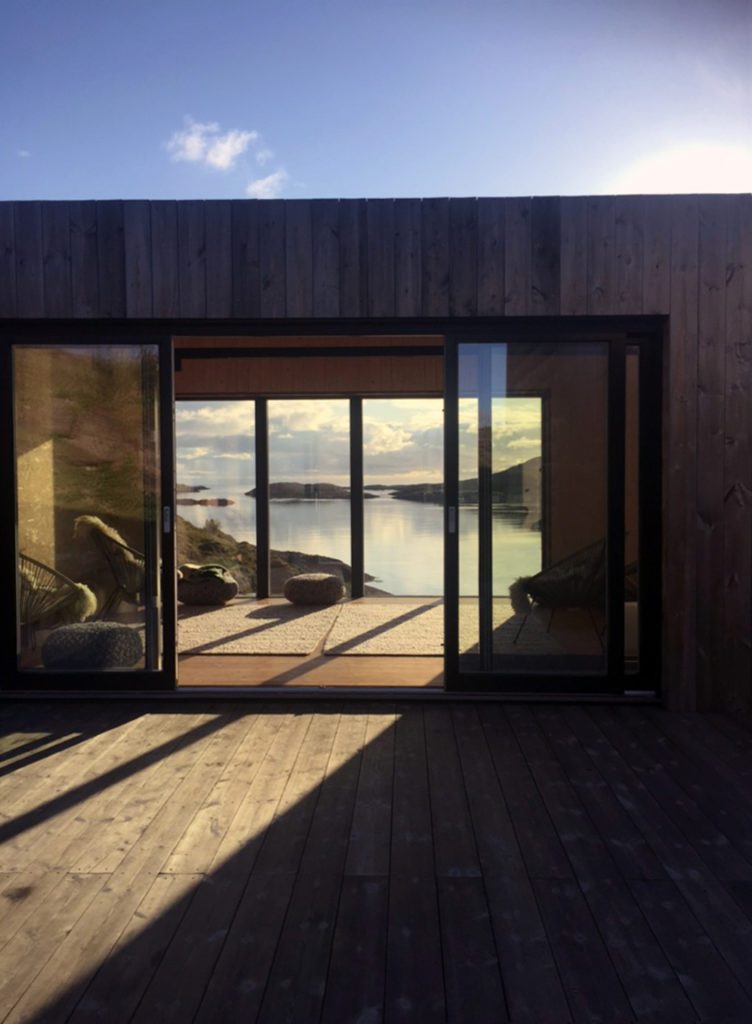 Even so, much thinking about sustainable architecture remains focused on technical approaches. The success of Biotope – and its like-minded peers in the High North – offers a different paradigm, one which draws people closer to nature, one in which buildings are always created with ecological considerations in mind.