Pride and no prejudice in the Norwegian countryside

The first official Pride parade in Norway was held in the streets of Oslo in 1982, since then the festival and protest has grown exponentially. Every year, proud members of the LGBTQ+ community and their allies gather to celebrate, not only in the capital, but increasingly so in smaller places around the country, as Marte Eide investigates.

The importance of smaller communities showing support for the LGBTQ+ community might be of even more significance. By leading by example and embracing all the members of their community, they are proving that the countryside isn’t necessarily a place of prejudice as one might believe, and that there is hope for LGBTQ+ individuals all across the country to be accepted for who they are. 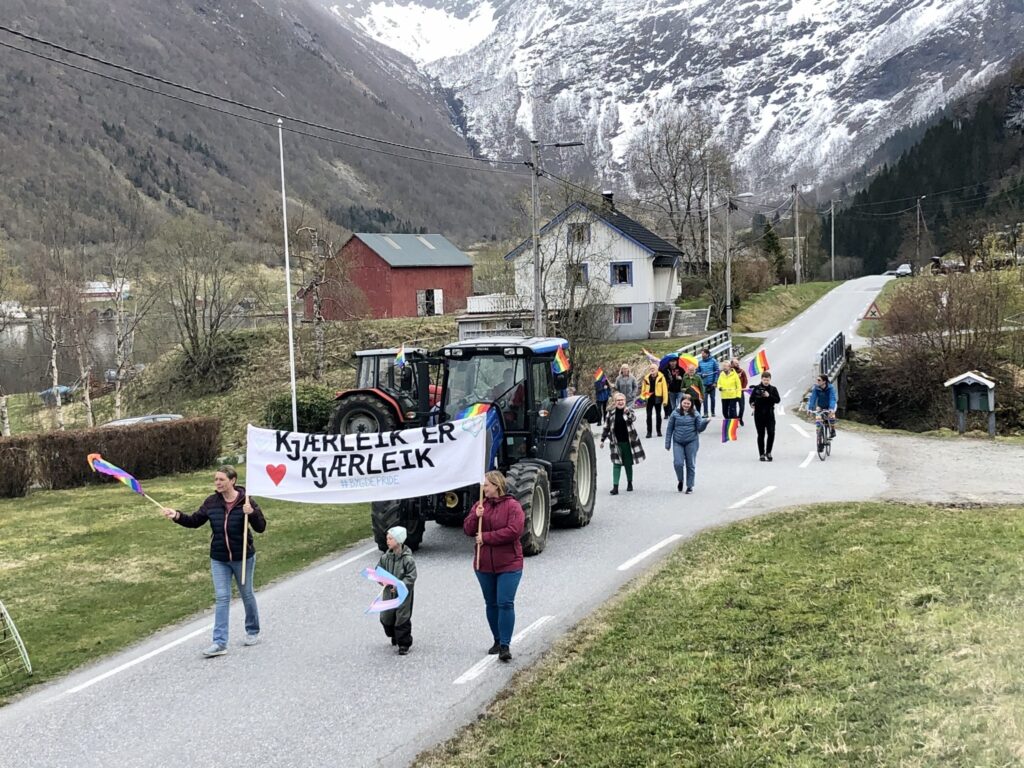 Pride in the countryside. The banner says ‘love is love’ in Norwegian. Photo: BygdePride 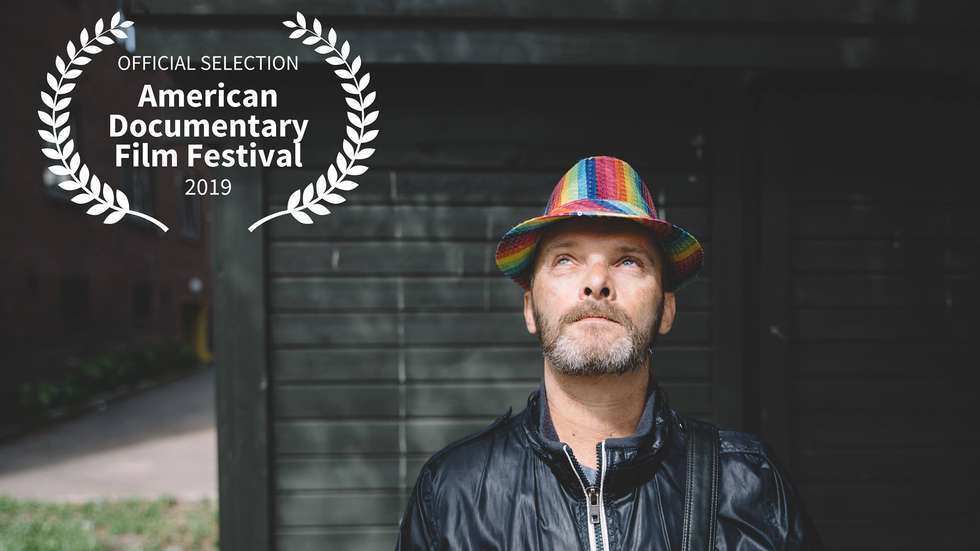 The documentary follows 52-year-old Bjørn-Tore who moved from the small town Volda to live an openly gay life in Oslo. When he returns to Volda to participate in Norway’s first Bygdepride, he has mixed feelings about going to a parade in the place he once experienced many prejudices, especially as the organisers meet protests from a local congregation.

It’s been 3 years since the tradition began, and Volda is not looking back. Bygdepride has become an annual happening, one that many inhabitants look forward to and where diversity can be celebrated.

This year, queer history is being made at Oslo Pride as NRK, Scandinavia’s first state channel, invites viewers to a Pride broadcast on Friday 25th June. The live program has Oslo Pride as a backdrop, and focuses on diversity, inclusion, and the breadth of queer culture. This year’s broadcast will also be a natural warm-up to Norway’s Queer Culture Year in 2022, which marks the 50th anniversary of the decriminalization of homosexuality in Norway.

“It’s a historic event, and an enormous recognition of the efforts countless volunteers put in throughout the year to make Pride both here in Oslo and elsewhere in the country,” observes Fredrik Dreyer, chairman of the Board of Oslo Pride. “The queer movement and our supporters now have a unique opportunity to show the party and the protest for the whole of Norway, even where Pride is not yet arranged.”

“I hope the message of freedom, equality, love and diversity reaches the innermost fjord and the deepest valley” Fredrik Dreyer

Inge Alexander Gjestvang, the Leader of the Association for Gender and Sexuality Diversity in Norway (FRI), believes that the reach Pride will get, both with a broadcast on NRK and digital streaming on oslopride.no, will have positive effects across the country. 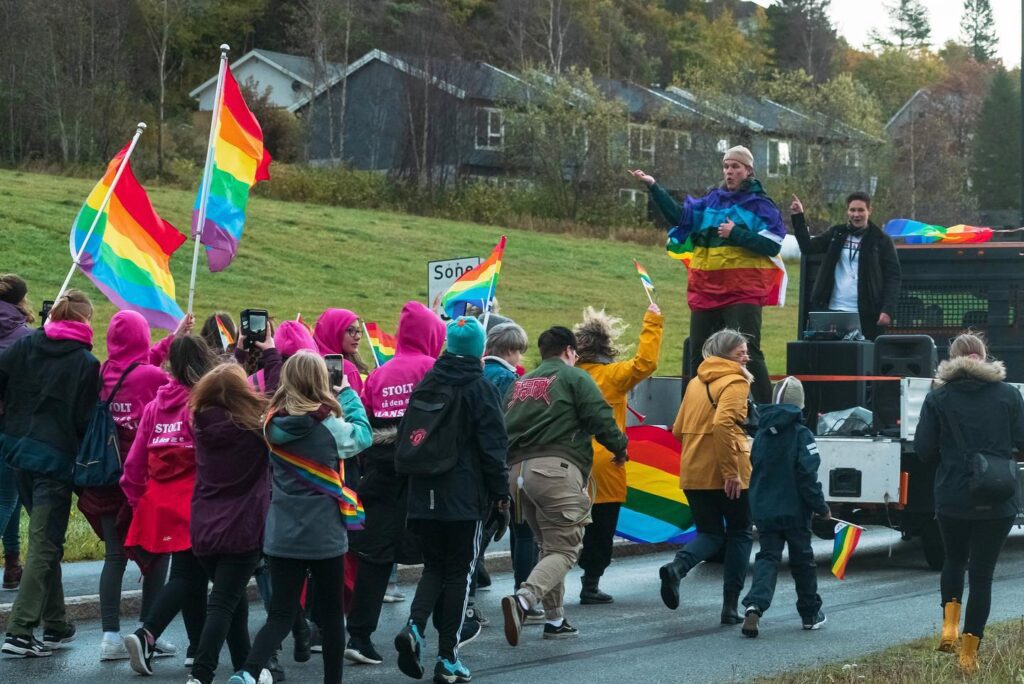 “It is important that everyone can live good lives like themselves no matter who they are and where they live in the country,” says Gjestvang. “We still have a way to go before this goal is reached, and Pride will, in many ways, be the queer event many look forward to throughout the year. We can never take our rights for granted, and the work for an open and inclusive society must take place every single day in every town and village.”

Proud on the mountain tops

Norway is a country of mountains, and hiking is a natural part of many people’s lives. Perhaps that’s why the concept of Fjell Pride (mountain Pride) is quite unique. Fjell Pride at Sota Sæter (or “summer dairy”), a lodge in Breheimen National Park, is possibly the world’s highest Pride parade, taking place 2,088 metres above sea level. 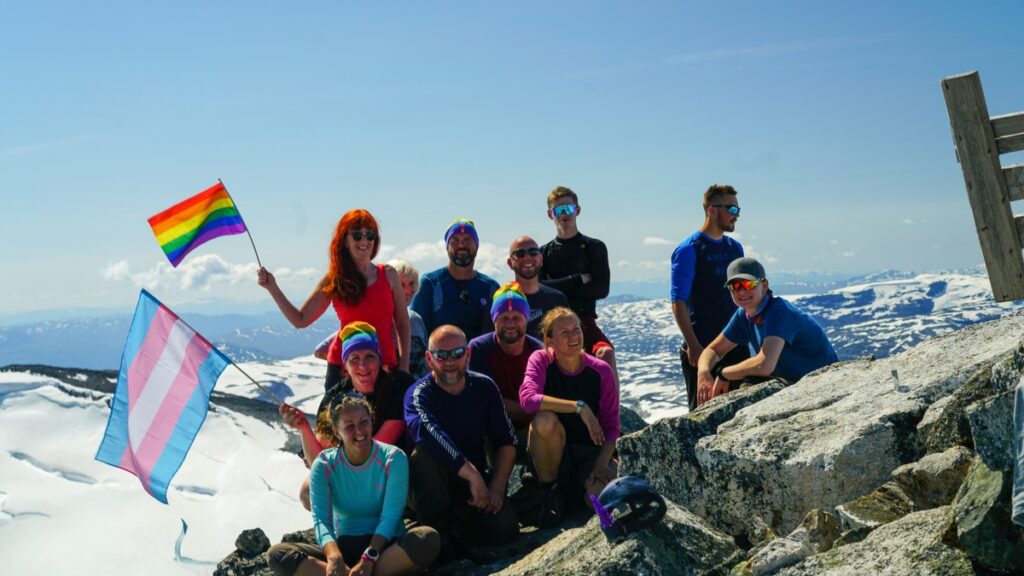 Participants at Fjell Pride in Skjåk. Minister Bent Høie (in the middle with a rainbow hat). Photo by Fredrik Kleppe.

Last year, mountain-top celebrations made national news when Norway’s Minister of Health and Care Services, Bent Høie, participated alongside his husband. “It’s a great initiative. The idea behind “pride” is to bring out the diversity of the queer world. Then society as a whole can understand that people love different people, but that we all still have the same value and rights,” Høie said about the festival in 2020 to NRK. This year the event will take place on 8 July.

“Society as a whole can understand that people love different people,” Bent Høie, Norway’s Minister of Health and Care Services

Ove Lilleengen, the organiser and host at Sota Sæter, wants to show the mountain village as inclusive and health-promoting. “We have a saying up here, that ‘in the mountains you are free’. The Pride celebration is a continuation of just that. In today’s society not everyone dares to be themselves and that is not good, that’s why this is a very important focus,” says Lilleengen.

Celebrating unity, diversity and love
This year, Oslo Pride will once again fill the streets of the capital, with Pride Park, Pride House and Pride Parade, running from 18 – 27 June. The festival will add its colourful character physically across the city and digitally across screens, providing a big celebration and a protest. 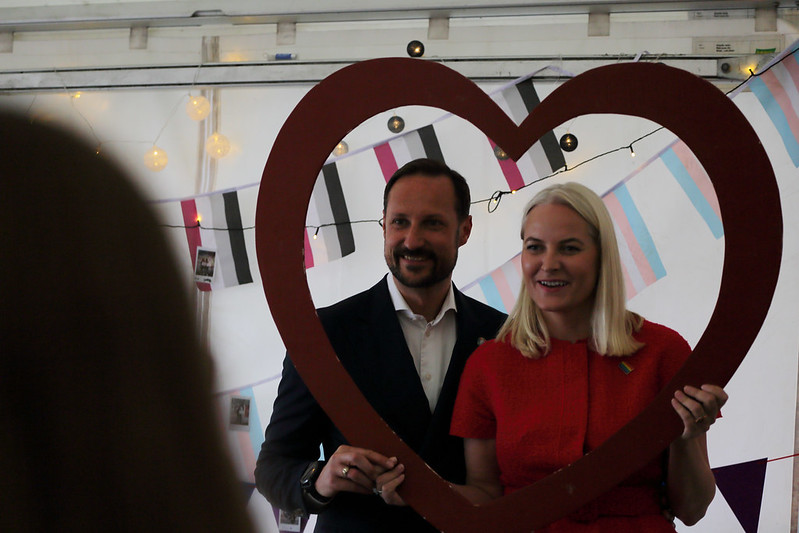 “After a long time where many of us have felt isolated and lonely, Oslo Pride is an all the more important gathering point,” says Oslo Pride’s head of communication, Tone Simonnes.

“Thanks to the digital elements we are able to reach those who cannot participate in person, as well as a larger national and international audience – which works particularly well this year, with the theme being international solidarity,” explains Inger Kristin Haugsevje, a board member of Oslo Pride. 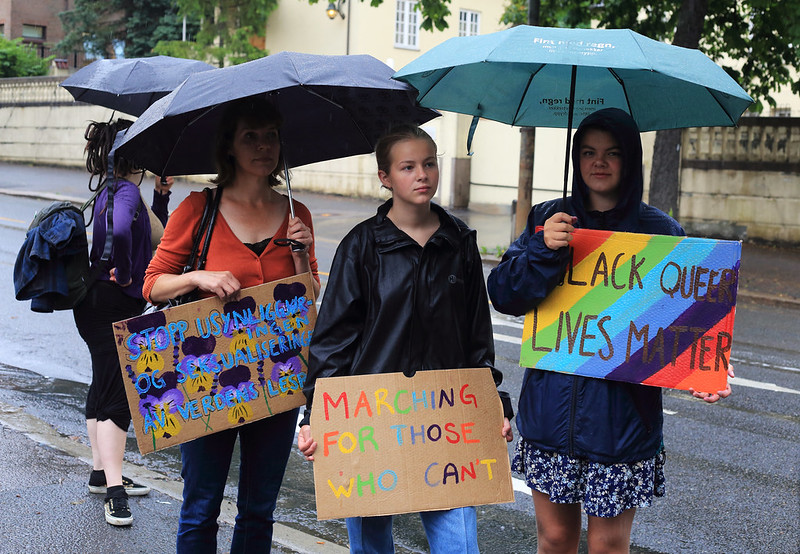 Many march for those who can’t. From Oslo Pride 2020. Photo by Oslo Pride

The last decade has seen a strong mobilisation for LGBTQ+ rights worldwide, which has, in turn, led to many important breakthroughs. Queer movements in different countries have built up strong solidarity strategies, where a common fight against discrimination and marginalisation has been central. However, the situation for people whose gender and sexuality are different from the ‘norm’ is still extremely demanding in many countries.

“We will show our support and solidarity to those of us who experience deprivation of liberty and discrimination by putting this issue on the agenda,” says Tor Kjetil Edland, head of department at Pride House. “Oslo Pride emphasises international solidarity in the festival’s cultural and political program to stress that one should not take the struggle for rights or victories for granted.”

For more information on Fjell Pride in Sota.
Details on this year’s program for  Oslo Pride.