Height of the Reeds, composed by musician and professor Jan Bang, guitarist Eivind Aarset and jazz musician Arve Henriksen, is a commissioned work to the city of Hull – Great Britain’s Cultural Capital 2017. Bang is currently supplying the piece which will be played during the whole of April.

“This piece is one of the two largest commissions for the cultural capital,” says Bang.

Height of the Reeds is the name of the work in question, and it was composed by Jan Bang, Eivind Aarset and Arve Henriksen. The music will be played whilst the audience move – each with their own headphones – over the 2220 metre-long suspension bridge, Humber Bridge, in Hull. The work has turned into a forty-five minute musical sound trip, which takes the bridge’s own sounds as its point of departure. 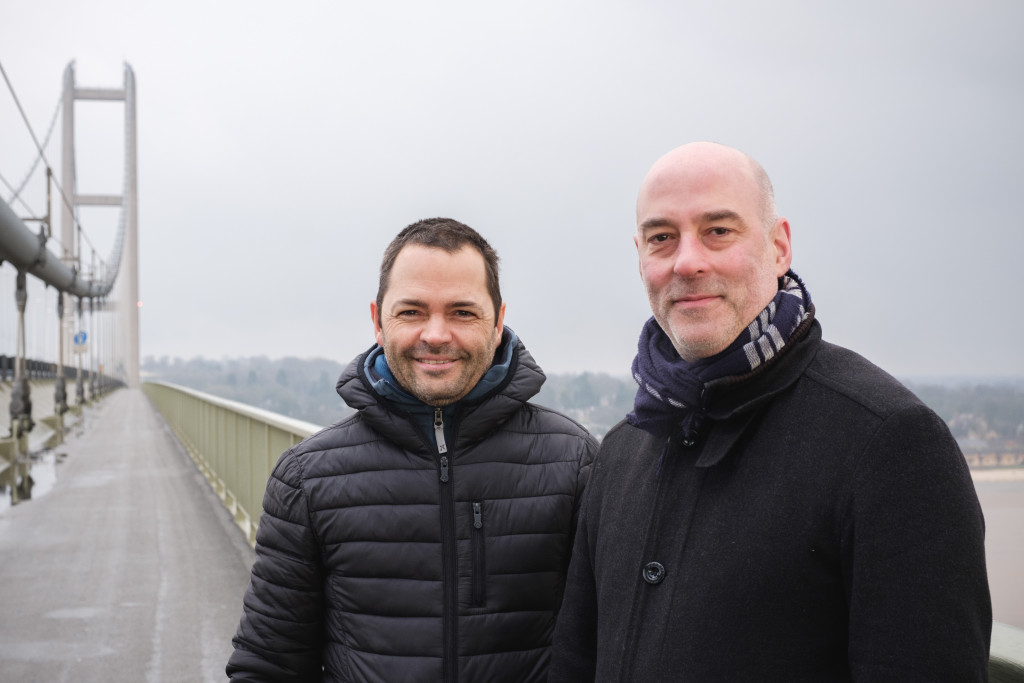 The ambience emanating from the bridge has been pre-recorded by the Hull-based sound artist, Jez Riley French.

Authentic ambience
“His authentic soundscapes have been a condition required by the cultural capital, which ordered the work. The sounds are a backdrop to the composition. Jez Riley French is a supreme man to work with. He was also present during the first survey of the bridge last summer,” says Bang.

They walked across the bridge and listened. Everyone walked and listened intently – the composers and the “ambience man” from Hull. They listened to the wind, the river and the bridge’s “song”. The sound from the steel against the concrete, the rubber wheels against the asphalt, the waves against the noise of the engines, and the song of the reeds in the wind. 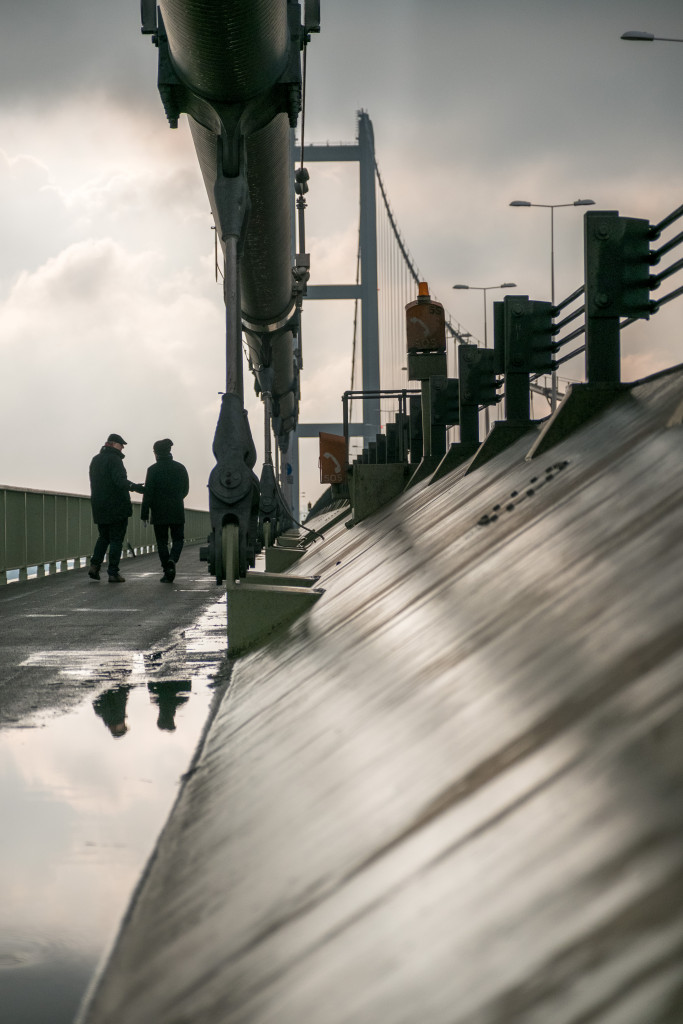 For Bang and his fellow composers, it was important to capture the character of the bridge and to ensure an interaction between Riley French’s recordings and Opera North’s choir and orchestra. This was, in fact, the other condition named by the commissioner: that the well-known musicians from Opera North, with their headquarters in Leeds, were to perform the music.

“It was important to find musical space for the trumpet, Arve Henriksen’s voice, and Eivind Aarset’s guitar. Henriksen’s singing is a kind of humming,” says Bang.

Plays most abroad
In common with his fellow composers, Jan Bang plays more abroad than in his home country. After one concert in London, he was asked by Opera North about whether he was able to contribute a commissioned work to the cultural capital, Hull, in 2017. He was. 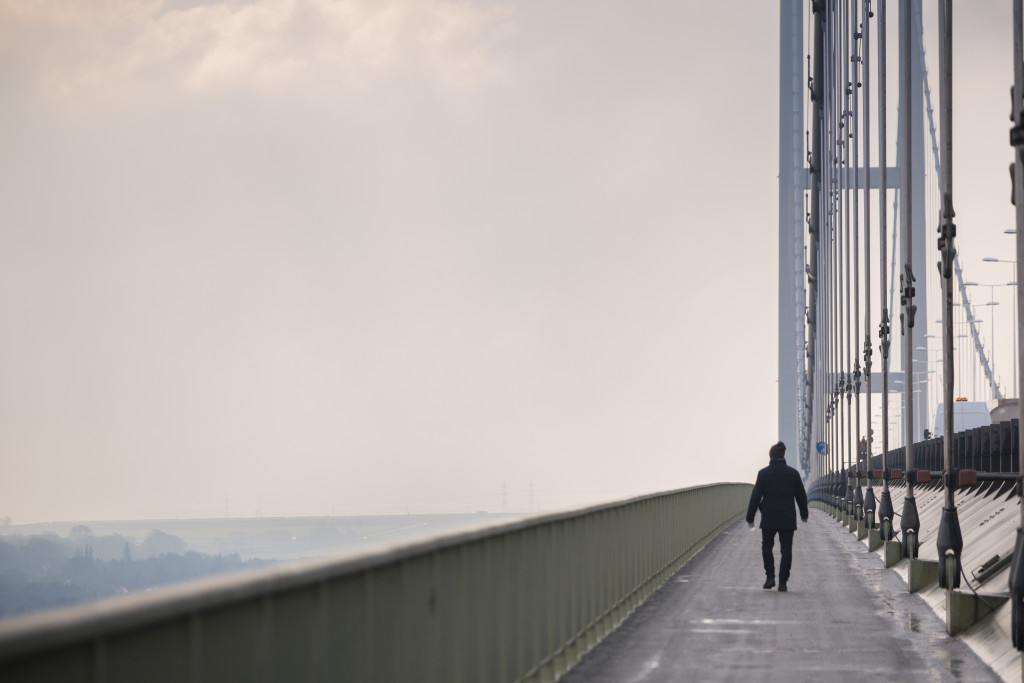 Jan Bang on his way over the bridge in Hull. Photo – Tom Arber

At the moment, he is giving a finishing touch to the soundscape, which involves in part adjusting the sound to the headphones the audience is actually going to use when they walk over the bridge and listen.

“All of the details must work,” says Bang.

The music has acquired a kind of cinematic or narrative character, which works together with the sounds and the view from the bridge on which the audience stand.

“The process has been organic, where each element has grown out of others. First, the authentic recordings, then we added in Eivind Aarset’s guitar in the studio, Henriksen’s trumpets and vocals, my samples, and quotations from British composers like Benjamin Britten and Henry Purcell. I searched UiA’s archives for good audio tracks from British composers. There is a doctrine which I have imposed upon myself – that there will always be something which showcases the place in which we are working,” says Bang.

Norwegian poetry in English
The organic compositional process has also led to the translation of ten poems from the poet Nils Christian Moe-Repstad’s book, Wunderkammer (2016), which are read aloud by English actors during the sound trip over the bridge. 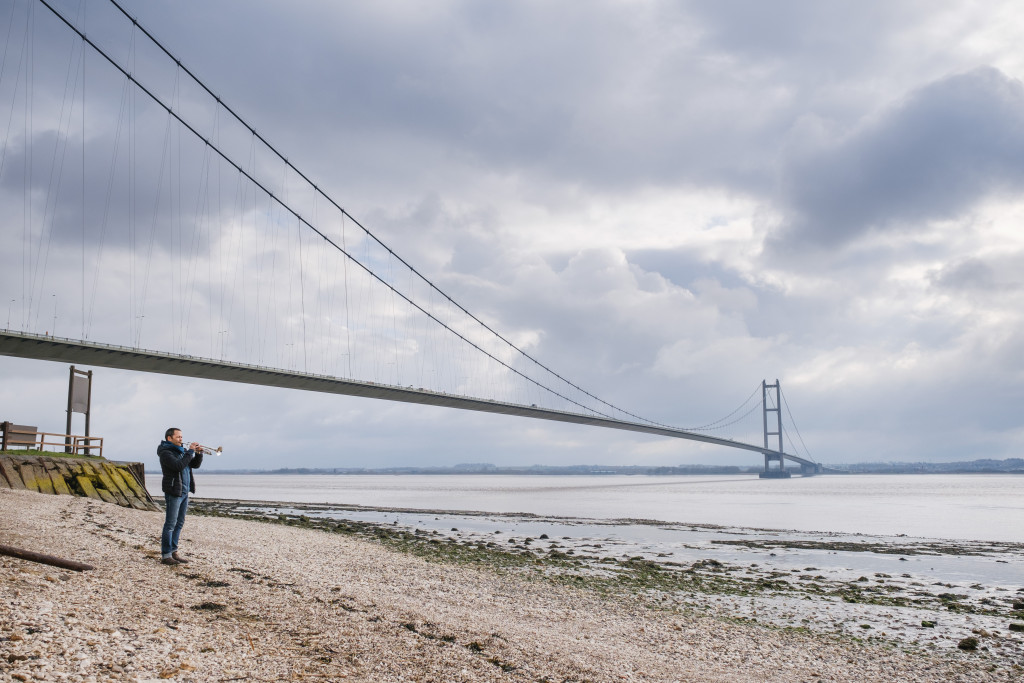 “The audience passes different trigger points on the bridge which provide new experiences all the time. They will, amongst other things, hear Moe-Repstad’s poetry,” says Bang.

In a few days, he will take with him the finished musical work and take part in the “maiden voyage” over the bridge, together with the audience, on the opening day, 1 April.