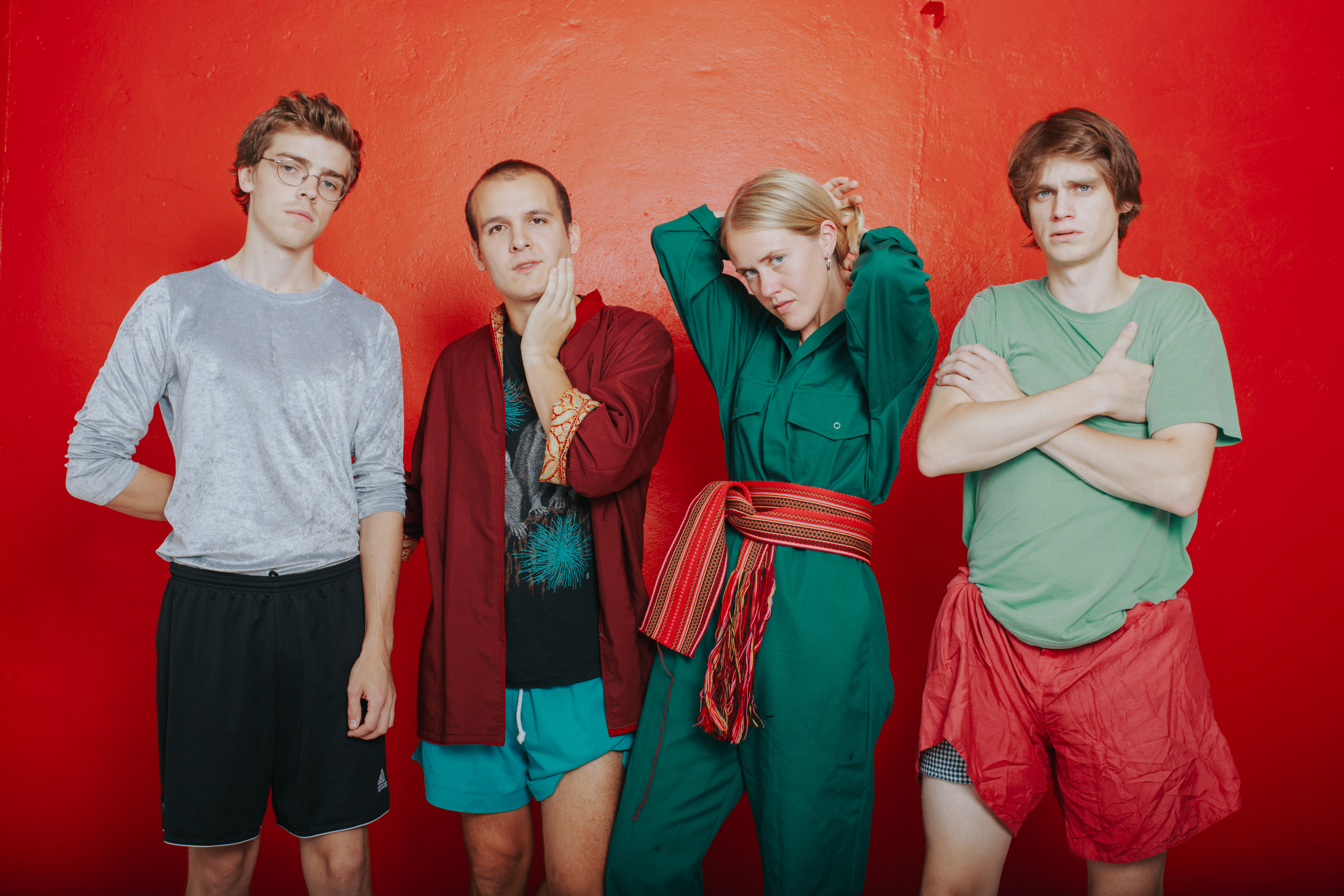 There’s a lot of hype about a lot of artists a lot of the time these days. Sometimes artists never quite live up to those expectations. At other times, they surpass them. And then there’s the rare occasion where the artists smash the hype right out of the park several times over and then smash it about some more, just because they can. That’s exactly the case with Pom Poko, one of Norway’s hottest talents around right now.

Defining their own brand of noisy and frantic punk-pop, listening to Pom Poko’s recently released debut album “Birthday” is a wild ride, having been described as “gloriously unhinged” by the NME, “Willy Wonka-esque” by DIY magazine and “thrilling and quirky” by the Line of Best Fit. Whether it’s the happy distortion on If U Want Me 2 Stay, the off-kilter title-track Birthday, the fuzziness of Peachy or the down-tempo Honey, there’s a lot on offer here. However, listening to the lyrics on the stunning My Work Is Full of Art describes all you need to know – “Please don’t fear me, I am just art…I want you to stay, I want you to love me”. And love them you will.

Their live performances have been drawing similar praise, focussing on the seemingly unstoppable energy of the band on stage. Fronted by the effervescent and irresistibly charming Ragnhild, ably supported by Ola (Drums), Jonas (Bass) and Martin (Guitar), Pom Poko are the perfect example of a band who are so clearly having the time of their lives when they perform, it’s impossible not to join in. Having kicked things off in the UK back in 2017 with a now classic performance at the Great Escape Festival in Brighton, they’re set to emulate that again at this year’s festival, making not one but two appearances. We had the pleasure of speaking to bassist Jonas Krøvel ahead of these performances, so read on below to find out how they got started, what they think about making mistakes on stage (spoiler: both delight and catastrophe) and why you might just be seeing Pom Poko in a Wallace and Gromit style stop-motion animation soon.

For those that haven’t had the pleasure of hearing about you yet, can you introduce yourselves?

We are Ola, Martin, Ragnhild and Jonas. We come from and live in different parts of Norway. We are very good friends and had known each other for a long time before we started making music together. Now we know each other even better, and love to make new music and love even more to perform new music!

You’ve developed a unique sound, mixing punk, art-rock, jazz and pop. You all have a ‘traditional’ jazz background from the Trondheim Music Conservatory, so where else do you draw your musical inspiration from?

Although three fourths of the band are educated jazz-musicians, none of us were never really full-on committed to the jazz tradition. We are all interested in jazz, but the interest was never really determined, so none of us ever got exceptionally good at it. But, having studied jazz, we have encountered a lot of different, sometimes very weird or very academic music, which has helped us to be open-minded to a lot of different music. Our common musical inspiration is mainly music all of us listen to, with individual additions. Music we all listen to, or have listened to extensively, is for example: Broen, The Beatles, Deerhoof, Zach Hill, Big Thief, Gentle Giant, Mats & Morgan, Coldplay and Atomic.

How do you approach writing as a four-piece and how do you decide collectively which direction to take your music in?

When we make music it’s always in the same room, everyone makes it together. One idea usually leads to another, sometimes they add up, sometimes they don’t, and in the end we usually have a song that’s completely different from the original idea. The musical direction is rarely intentional. Occasionally we get a specific idea, but nothing more than ‘very similar to the Beatles’ or ‘happy/delightful’, for example.

If you had the opportunity to collaborate with any other artists around at the moment who would you choose and why?

Maybe make a music video with the people who made Wallace and Gromit, Aardman Animations. That would be grand!

Your live shows have been described as “the most fun you can have with your clothes on” and you’ve developed quite a reputation for your frenetic energy during live performances. What should we expect from your appearance at this years TGE festival?

The same as last time, but different songs! No, but we still want to play loud and fast.

What do you enjoy most about performing together on stage?

When someone does something wrong, that’s always fun, and usually leads to general delight, sometimes catastrophe.

You’ve recently released your debut album Birthday. How have you found the reaction to the record and how do you feel knowing people out there are enjoying it?

The reactions have been very interesting to observe, with a lot of different views on which songs people like, and which bands people think we sound like. We haven’t even heard of half of the bands people compare us with, which leads us to discovering even more music! It’s strange and delightful for us to have people listening to our music at all, and it’s even stranger, or more delightful, that they enjoy it. We don’t want to waste people’s time, so we really hope they enjoy it.

Can you recommend three Norwegian artists to look out for over the next few months?

Fieh is a great group, a happy band, we always look forward to hearing news from them, and go to their shows if we can! We also saw a band called Delish on this year’s by:Larm, their songs were extremely satisfying and attractive, we hope they will release more music soon! We almost always, and with good reason, recommend Broen, our label mates. We recently played the same festival, and they were as rad as they always have been! We think they said that they’re releasing new music soon, which is great news.

Pom Poko are performing at The Great Escape Festival in Brighton at Jubilee Square at 2:15pm on Friday and at Sallis Benney Theatre at 7:15pm on the Saturday. If you’re going to be at this year’s festival, miss them at your peril. In the meantime, Birthday is out in the UK on Bella Union records now, so strap yourself in and give it a listen.