The critically acclaimed performing theatre company De Utvalgte – meaning The Chosen Ones – represents something very special in Norwegian theatre: a successful fusion of form and content. De Utvalgte address serious and topical social policy issues – issues they elaborate on and illustrate through their distinctive visual stage language. De Utvalgte have distinguished themselves by exploring the dialogue between video footage and actors. Video artist and company member Boya Bøckman has even researched ways to use 3D technology in the theatre.

De Utvalgte are now bringing their production of Shadows – by award-winning Norwegian dramatist Jon Fosse – to London for their first British performance. Ahead of the opening night, we sat down with director Kari Holtan and the rest of the group to hear their thoughts on Fosse, technology and contemporary theatre in Norway. 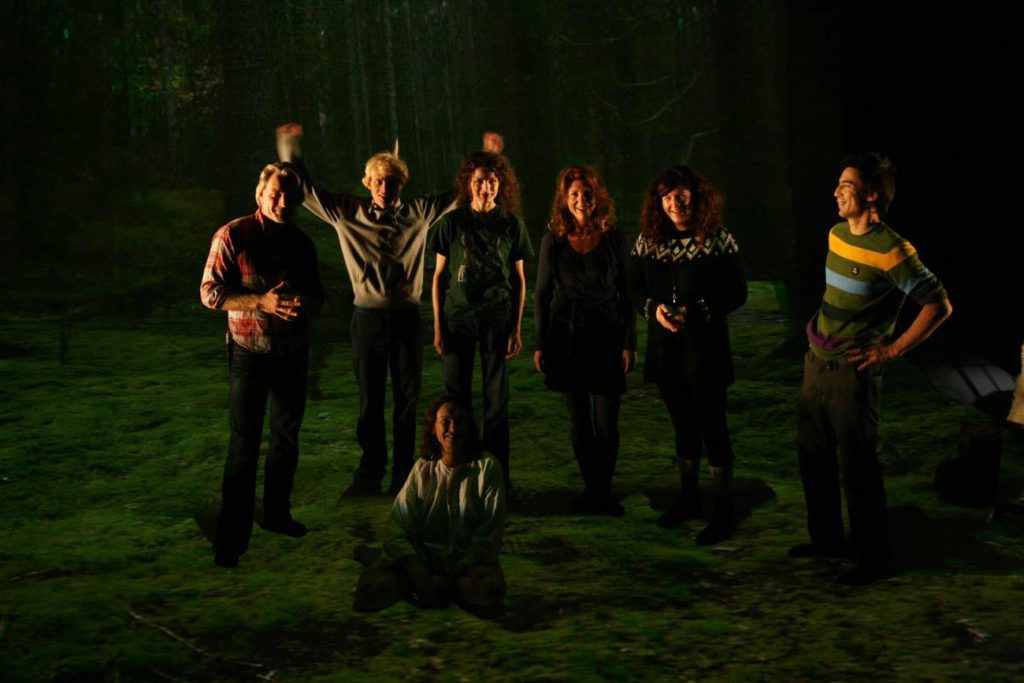 De Utvalgte away from the stage, with Kari Holtan second from right (Photo: De Utvalgte)

How – and why – did De Utvalgte come into being?

Five actors founded the company in 1994 after finishing at the Nordic Theater School in Denmark, a three-year education focusing on experimental physical and visual theatre language. The intention of starting our own group was to create the kind of theatre we wanted to experience ourselves, and to continue experimenting and searching for new expressions. Today, our group consists of Boya Bøckman, Torbjørn Davidsen, Anne Holtan, Morten Kippe, and myself. We work with other artists as needed. 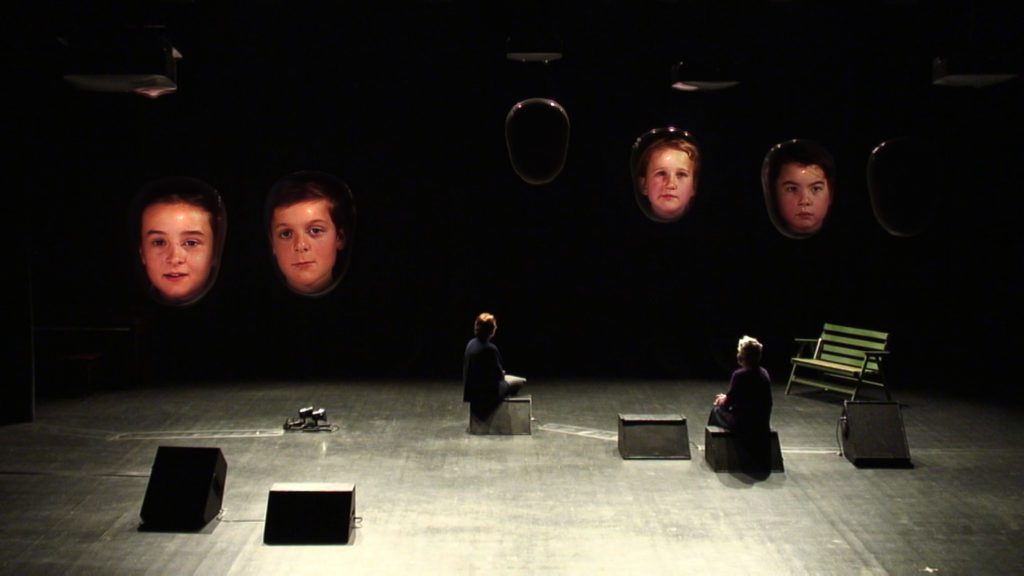 How has the Norwegian contemporary theatre scene evolved since De Utvalgte was founded 25 years ago?

Our experience is that it has developed a lot during this time. There are plenty of upcoming artists with a great desire to experiment and blast the framework for accustomed conceptions of what performing arts should and can be. The traditional distinctions between dance, theatre, visual arts, architecture and performance exist to a lesser extent.

For independent companies, the financial framework has improved in the form of support schemes, which has helped increase artistic quality and made Norwegian performing arts attractive to the international market. Three independent theatres in Norway – the Black Box Teater, Oslo; the BIT theatre garage, Bergen; and the Avant Garden (now Rosendahl Theatre), Trondheim; – have been crucial to the development of Norwegian contemporary theatre, by programming the best of Norwegian and international performing arts.

Moreover, there are now far more opportunities to educate within the performing arts profession both nationally and internationally. I also feel that there has been a change in the institutional theatres when it comes to the willingness to focus on contemporary theatre and contemporary drama, and the willingness to experiment with new expressions within performing arts. 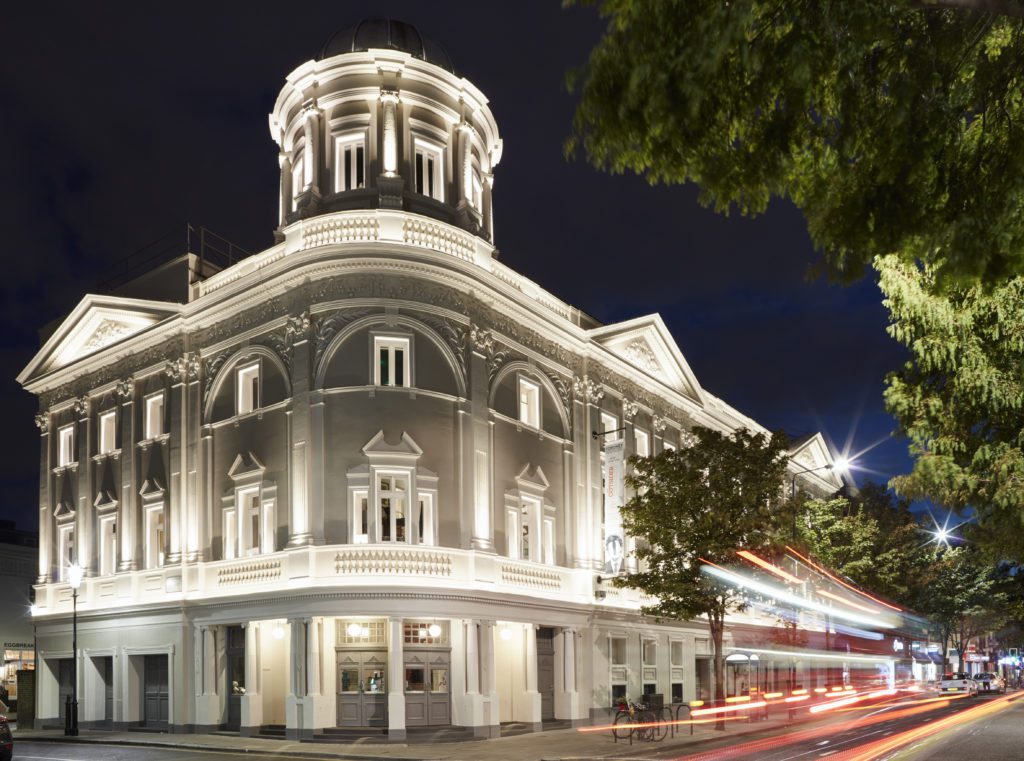 For those unfamiliar with Shadows, what is the story of the play and its themes?

The play is about people who are in some kind of limbo, an intangible space, where the memories of a life together become their only foundation. The characters are interrelated in different ways: as children and parents, or through marriage and infidelity. The text asks existential questions and reflects on who we are and how we trace each others’ lives.

Your production of Shadows has been staged all over Europe, as well as in Colombia, Iraq, Russia and China. How can you make a theatre performance understandable to an international audience?

Shadows has touched, and been recognizable, to many people, independent of their cultural background and nationality. Practically, the piece has been translated, and subtitled, into Spanish, Russian, Chinese, German, Dutch, Kurdish and English. This works well since the dialogue is short and repetitive and the language is simple and concrete. The performance takes place in a stylized space where everything is centred on what is said and unsaid – and this makes it easy for the audience to follow. 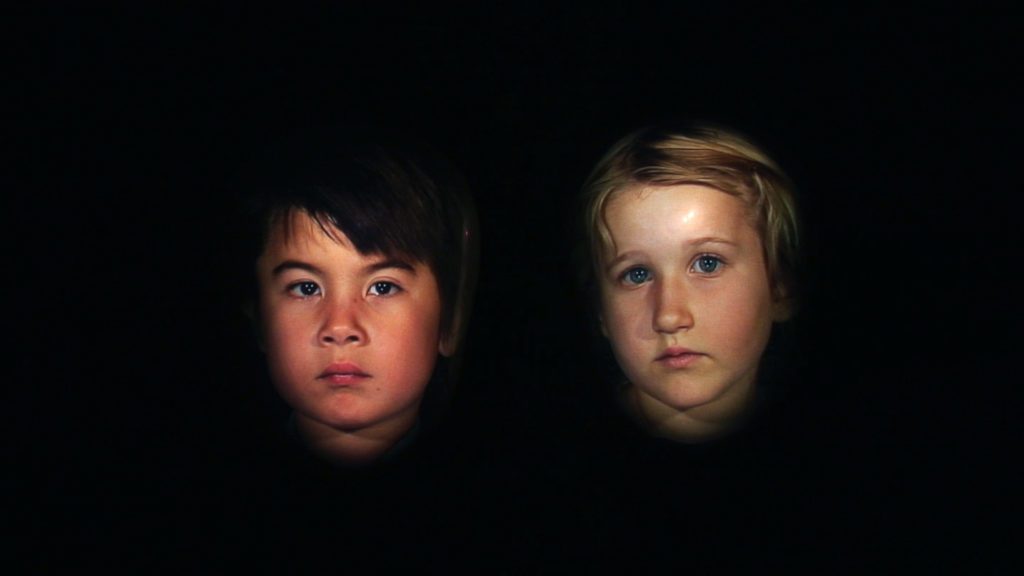 Where did the company’s fascination for using technology and multimedia in performances originate?

The use of video has always been an integral part of the artistic expression of De Utvalgte. It provides opportunities for parallel storytelling, reinforcing, enlarging or diminishing the expression in interaction with the actors on stage. As Boya developed a display system for the use of 3D on the stage, this was a natural way to proceed.

The fact that the actor can be integrated into a world where images can be displayed above and below, behind and in front of the actor with astonishing naturalness is fascinating. This has allowed us to recreate any environment and bring nature into the theatre room.

Fosse is by far the biggest and most performed Norwegian playwright after Ibsen. Many younger playwrights have probably been inspired by his textual universe without being able to highlight anything in particular. Where Ibsen has long stage directions with detailed descriptions of space, time and scenic acts, Fosse’s texts seem to be completely open, which also provides a space for the director’s interpretation and staging. The charged and often repetitive dialogue also leaves a lot of room for the actors’ physical interpretation. Nevertheless, the texts are almost fixed, because of their strong composition and rhythm. This was also the case with the staging of Shadows, where not even a single word or a break is erased from the script. Fosse has created a very unique theatrical language where dialogue is the very act, which inspires me as a director.

De Utvalgte performed works by Fosse before his breakthrough as a playwright. Do you remember when and how you encountered his work?

We were first introduced to Jon Fosse’s texts in 1994 by the Danish theatre director Thorkil Evan Nilsen. We read all the books he had published at that time, and we were very intrigued and shaken by the brutal and insistent narrative of vulnerable people on the margins. With the author’s approval, we created a performance based on excerpts from several of his novels: The bottle collector, Closed guitar, Lead and water as well as Two stories, which were merged into a new story, Erosion.

How do you, as a director, add something new to a production?

What is special about this performance of Shadows is that we let children, aged between six and ten, play all the characters in the piece: the mother, the father, the man, the woman, the girl and the friend are all played by children. During the production period, we made video recordings of the children’s faces while they were instructed to perform the text in the various roles. This film material was later edited and then projected onto six cocoon-like heads moulded in plastic. On stage, four elderly people wander around without saying a word. 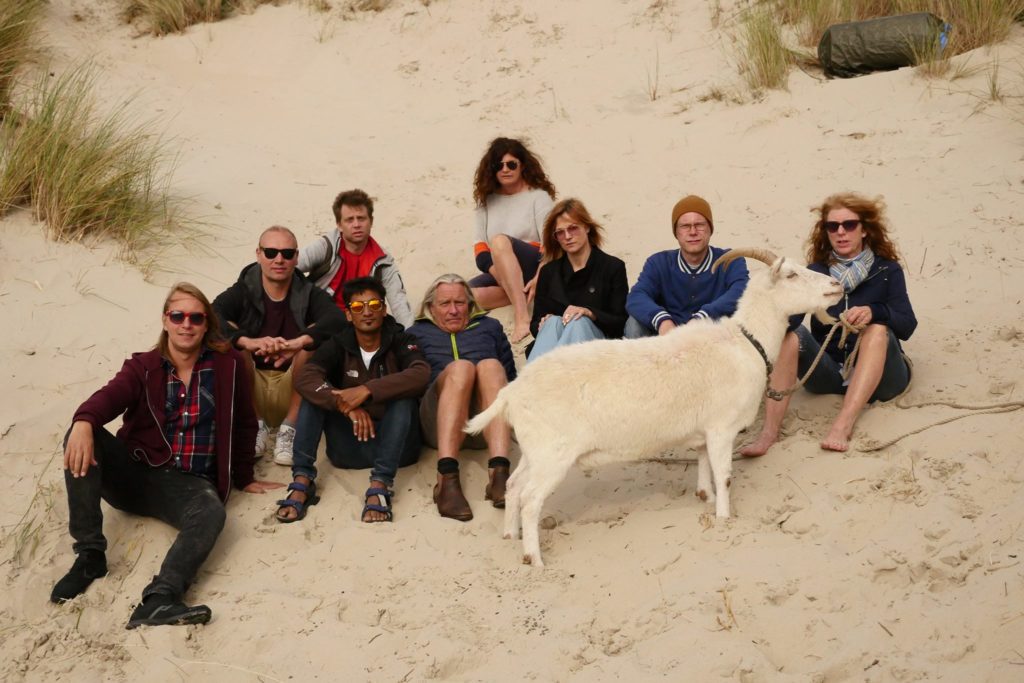 De Utvalgte away from the stage, with Kari Holtan at back centre (Photo: De Utvalgte)

Several of your productions feature a cast of people both with and without acting experience. What does this add to a performance?

We often work within the play of contradictions, roles and identities, with fiction and facts. By inviting people who are not actors onto the stage, we often see a vulnerability occur.

What do you think is the most challenging thing about working with free performing arts?

Working in the independent field gives us artistic freedom – and this is a privilege. We mostly create everything from scratch – everything from text, music and sound to scenography and video. This is a demanding process and a great artistic challenge. For the past seven years, De Utvalgte have been fortunate to have support from the Norwegian Arts Council. This has been crucial to our work and the productions we have completed. It has also given us the opportunity to work out ideas faster and at the same time allowed us to do long-term projects.

Outside of this scheme, many are struggling due to unpredictable income, lack of production premises, and demanding, lengthy rounds of funding applications. But compared to many other European countries, there are financial incentives for performing artists in the independent field in Norway. This has resulted in a rich diversity of artistic expression.

Shadows is on at The Coronet Theatre, London, 6-9 November