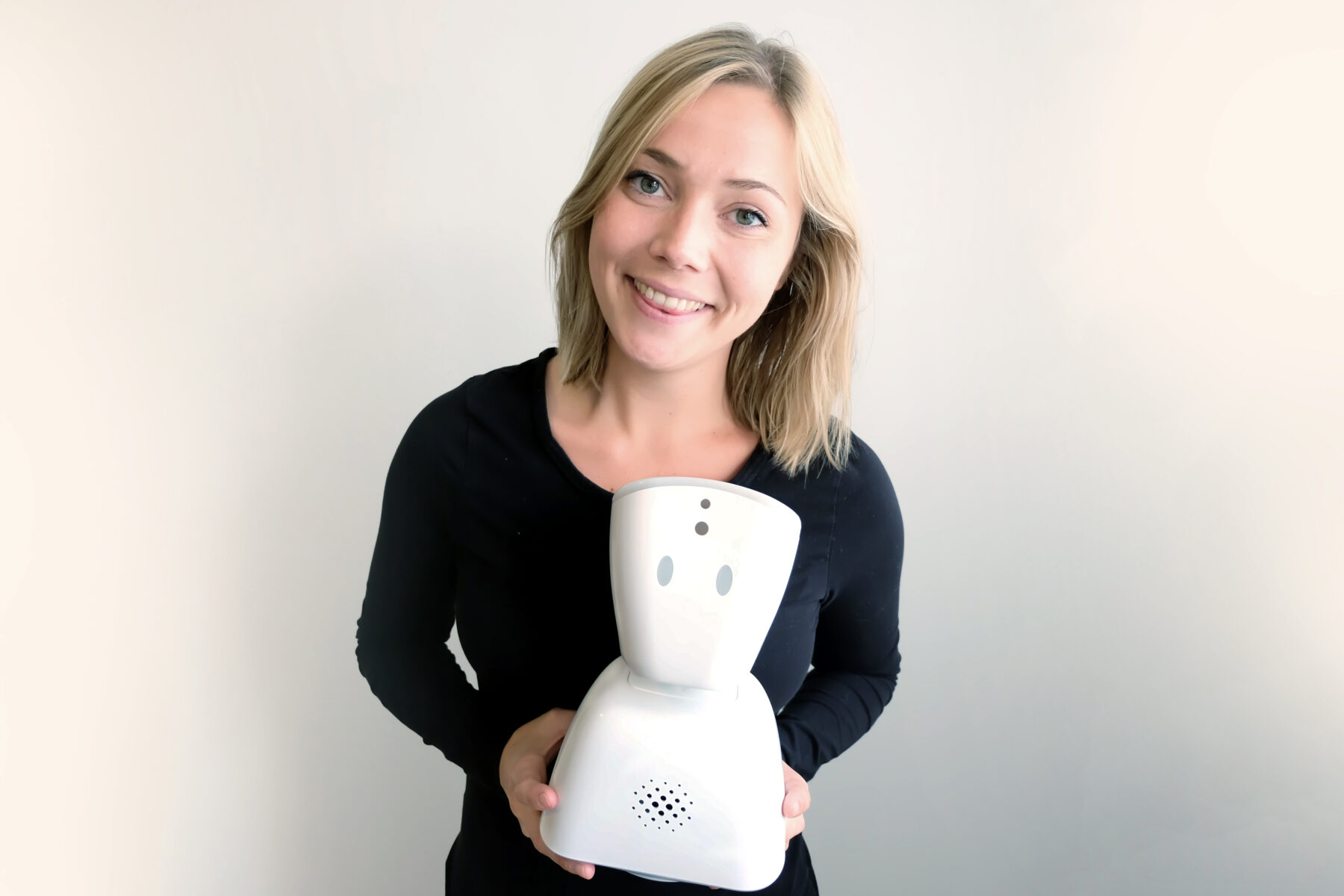 Karen Dolva is the CEO and co-founder of Oslo-based company No Isolation, which for the past five years has been on a global quest to end loneliness. The company has developed what it calls ‘warm technology’, aimed at bringing people together and combating loneliness.

They have launched two products on the market so far. The first is AV1, a robot which allows children with long-term illnesses a presence in the classroom. Acting as a ‘distance learning avatar’ this robot sits in class, with the pupil connected via an app from home or hospital, so they can see, hear and participate with their classmates and continue their education. Their second product is KOMP, a simple and safe one-button computer that allows elderly family members, who didn’t grow up with technology, a way to video call, share photos and send messages to their children and grandchildren. 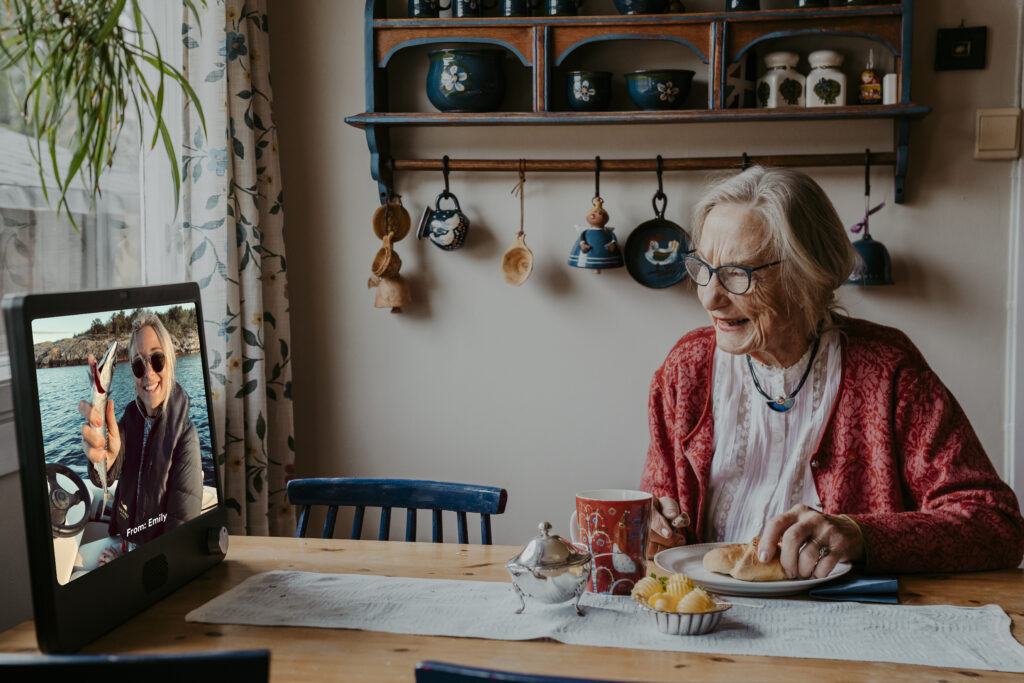 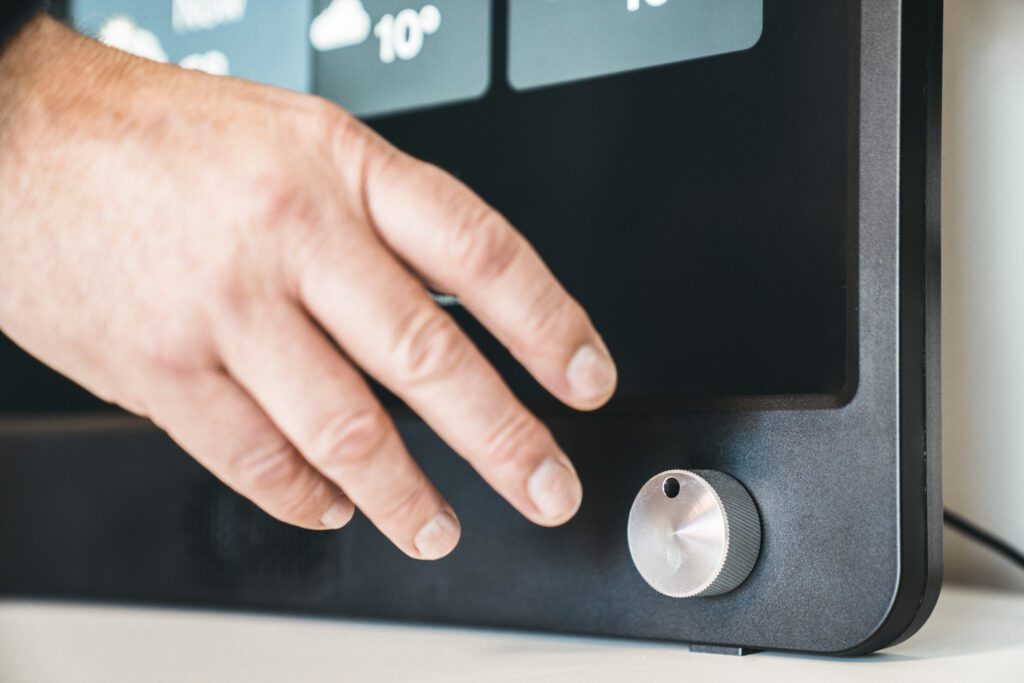 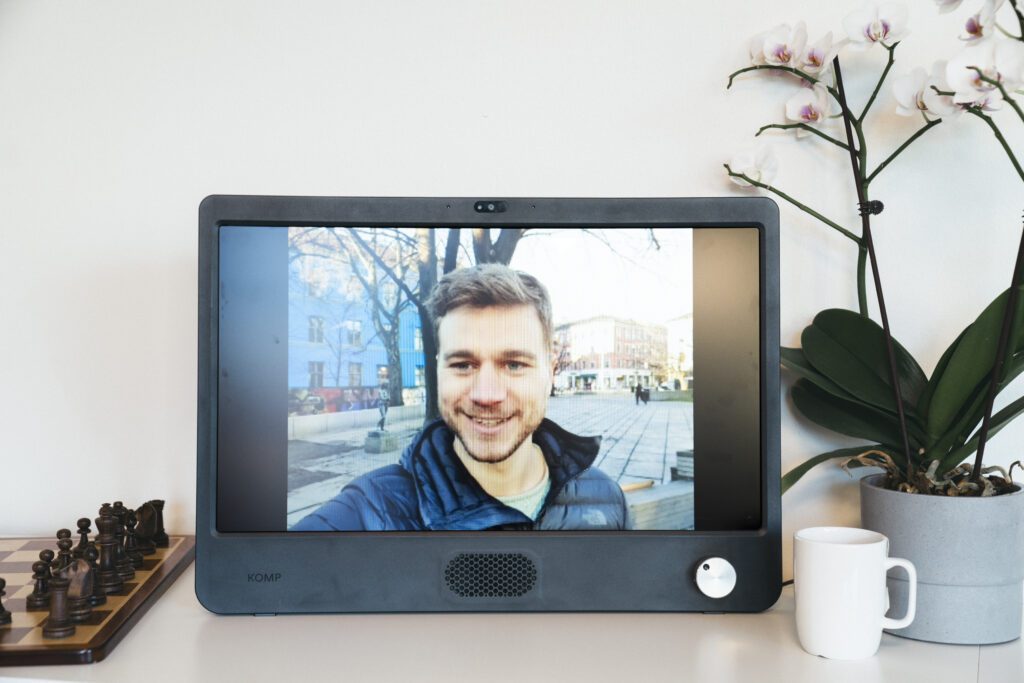 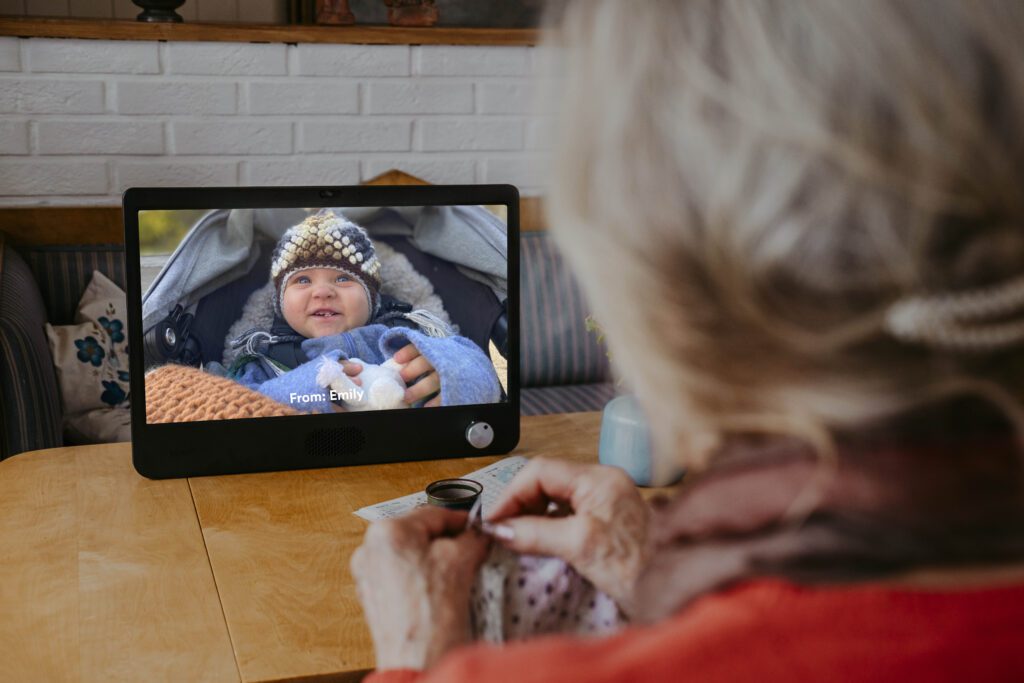 With the past year seeing loneliness and isolation reach epidemic levels, what No Isolation is doing has become more relevant and urgent than ever. It now has offices in Munich and London and the UK office nearly tripled its staff in 2020. At such a timely moment for her company’s mission, Dolva talked to Norwegian Arts about how technology can be a tool for togetherness.

How did No Isolation come about?

Co-founders Marius Aabel, Matias Doyle and I knew each other from a ‘tech incubator’ and had worked with start-ups before, separately. All of us knew that at some point we would start something together but we agreed that it is too easy to just do small things and small fixes and then say I am done; we had to find something that was big enough for us to dedicate our lives to. 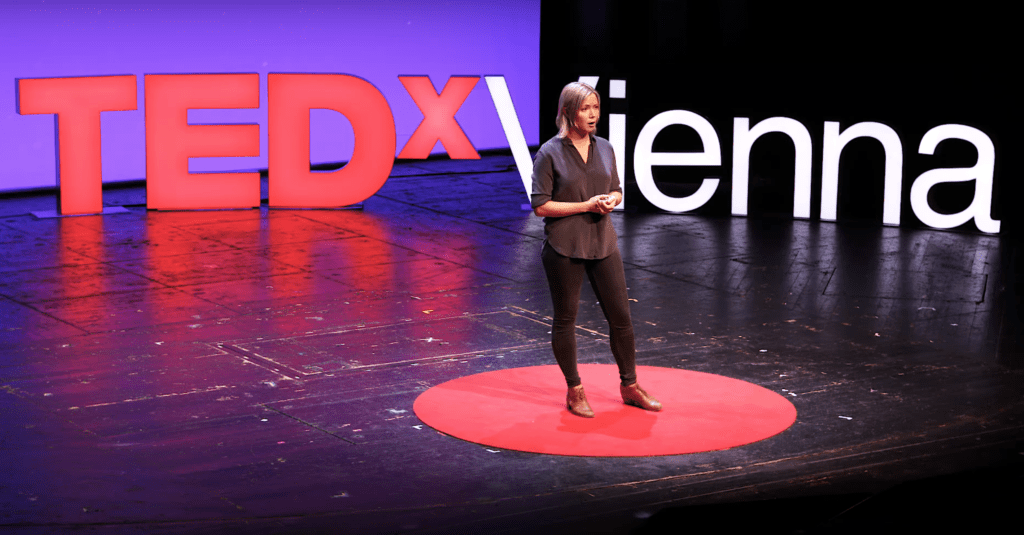 We wanted to make technology that wasn’t cold and efficient but that was warm and could contribute [to society]. We knew we couldn’t solve loneliness or social isolation on our own but we thought we could start shaping that market.

When you first started, was using technology to combat loneliness a new concept?

Five and a half years ago, we didn’t know of anyone else [in the technology industry] who defined loneliness as their market. There were quite a few charities and local community initiatives working in the area but the sad thing about local initiatives is that they are not scalable, and if you lose the one person that drives them, they lose momentum. I don’t think technology can solve this entirely but it can make things significantly better. Then communities need to take it that last mile.

You work in the area of ‘warm technology’. What does that mean?

There is no pre-existing definition because we believe we invented the term. At some point we started using it to counter the idea that tech is always something very cold. ‘Warm technology’ takes into consideration participants’ differing needs and abilities and provides equal access to communication.

It is defined by the feeling of belonging that it generates, as opposed to cold technology, which can create an illusion of togetherness but is often a barrier to genuine connection.

You once said that tech designers and engineers often want to make something cool instead of something useful. Can you elaborate on what you meant by this?

I think the main problem isn’t necessarily that engineers want to make something cool, I understand that, I want to make something cool as well! I think the main problem is that engineers and designers have for far too long made and designed products that they want themselves, things that will make their lives faster, happier and better. But, unfortunately, engineers and designers do not represent the whole population, so if they are given the power to make all the tools we use then what about the other groups? And I think that’s the crucial thing we try to address at No Isolation. 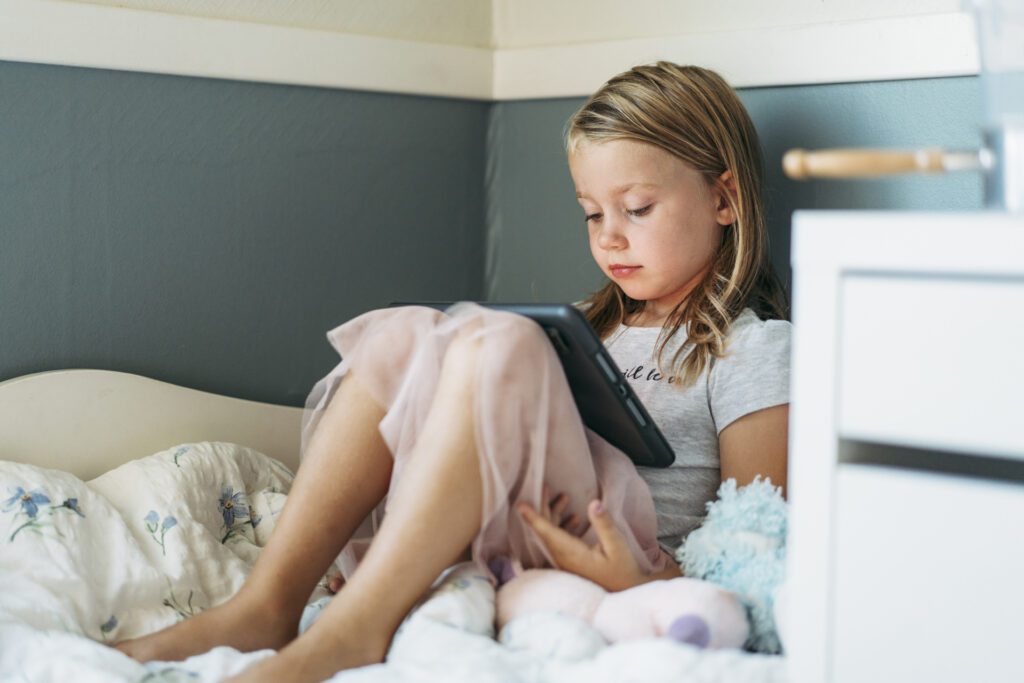 Children can use the AV1 robot from home to access learning in schools.

None of us are in any of the user groups that we have made something for, so far, but it’s about reading up on the data and doing enough research to put ourselves in the mindset of those users and design and make something that will really work.

How often do you upgrade and change your products based on user feedback and data?

Software-wise, continuously. Hardware-wise the changes obviously come in longer loops because it takes a lot more time. AV1 as a hardware concept is more resolved and complete than KOMP. AV1 is super specific. These kids cannot go to school; they should be able to. We know the problem, here is a solution. KOMP is targeting a more complex user group. The question is, should it do more or less?

We have a lot of dementia patients that don’t necessarily understand the device itself but all of a sudden see their kids or their grand-kids pop up and have video dialogues without actually realising how that happens.

At the other end of the spectrum, we have people who are completely fine and actually want it to have more features. So you have to balance how many features would ruin the experience for the dementia patient and how few features is enough for those who could actually do more.

There are obviously significant privacy issues with products like these, especially the AV1, which is targeted at minors. How have you overcome these?

The AV1 is end to end encrypted, and there is only one person on the other end of the robot. No company or anyone else can look at that video stream so it is unique to that user. We worked a lot on it. But I have to say, we walked into a minefield when we decided that we were going to put a camera in a classroom, connected to a hospital bed, with kids either end. 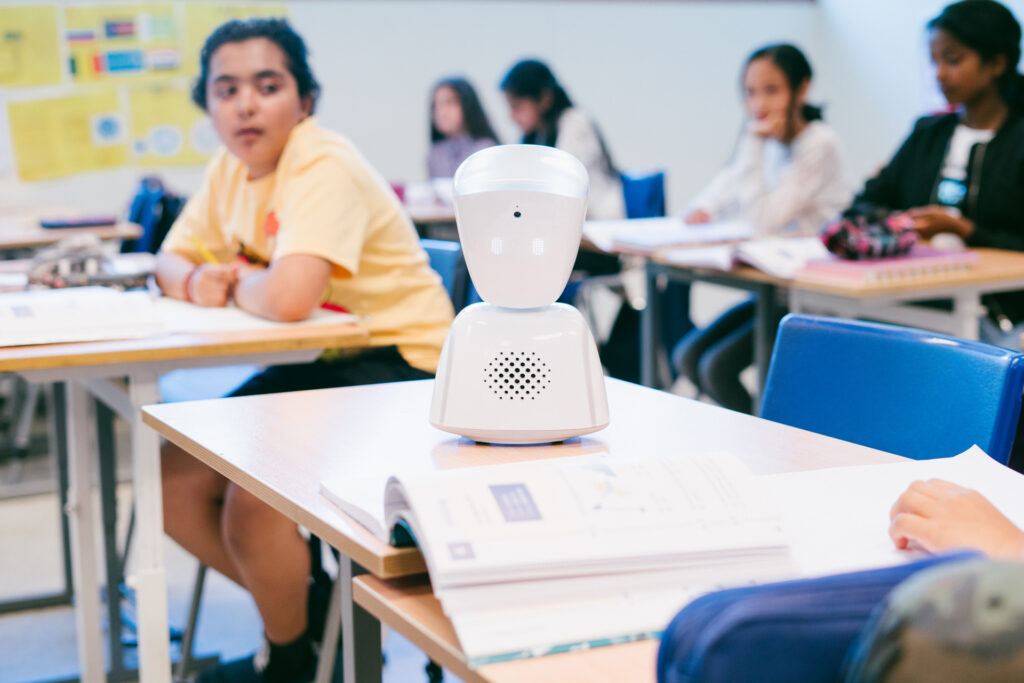 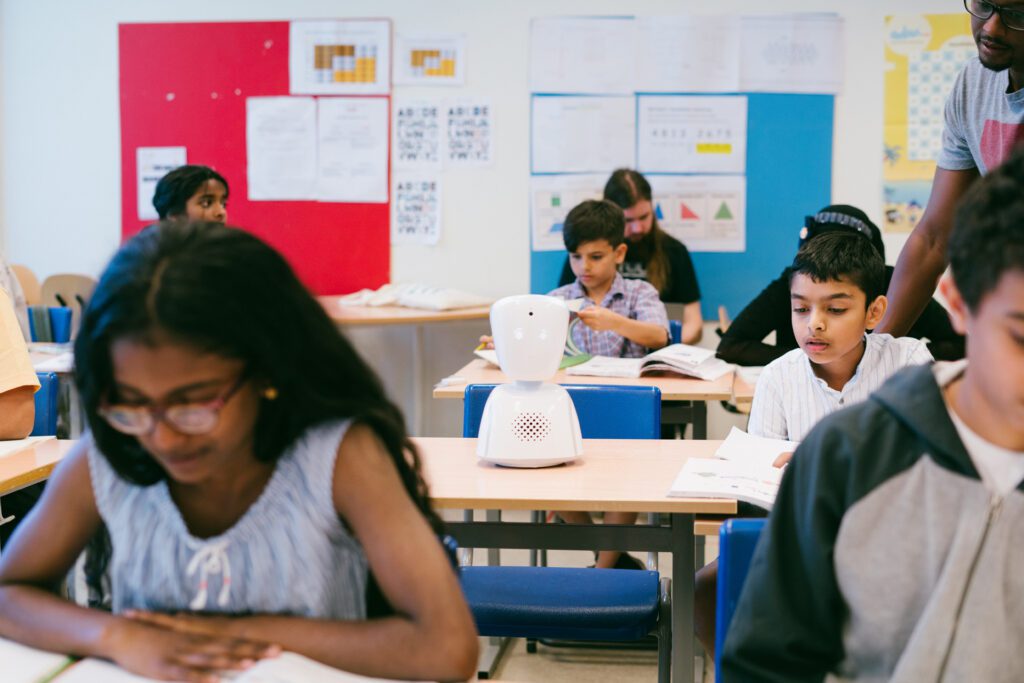 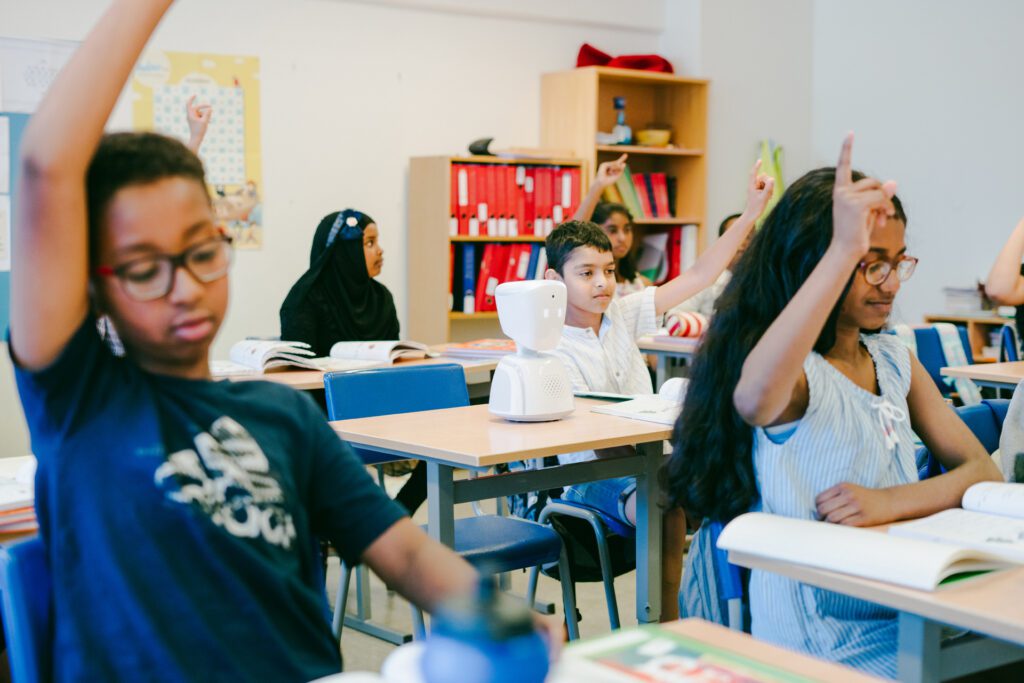 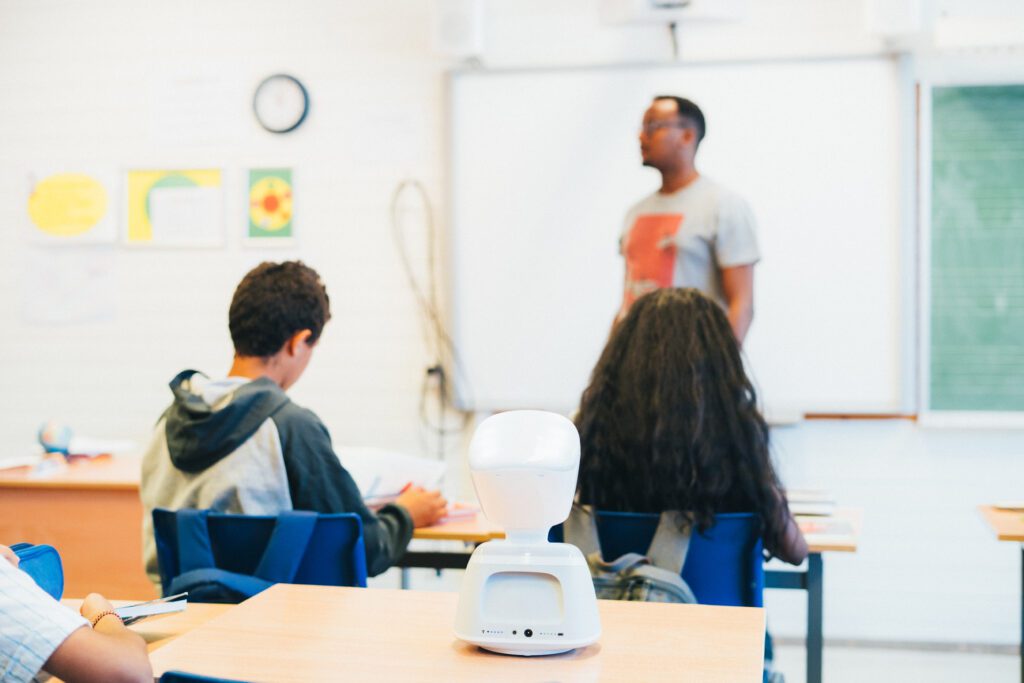 We called the Norwegian privacy and data security government department to ask for help and they were like ‘wow, okay’. But they have been very helpful and explained how to comply with existing laws, and in 2018 they gave AV1 second place in their ‘privacy by design’ competition. Too much tech that is designed to help us in our lives stores and uses that data, it is the number one business model right now, which is very scary because a lot of us don’t know what we are buying.

Norway is often cited as one of the happiest places on earth. Why is that and how does that impact on loneliness and isolation?

I think what pushes us to the top of these lists is the fact that we have an economy that supports us, meaning that most of us can have a work/life balance, we don’t have to work two or three jobs to be fine. Also, the difference between the CEO salary at a big company and those working with the machinery there is not very big, which I think is brilliant, and I don’t understand why it is not like that everywhere in the world. Basically, there are very solid social safety nets here, so if something happens to you the government and existing infrastructure has your back. 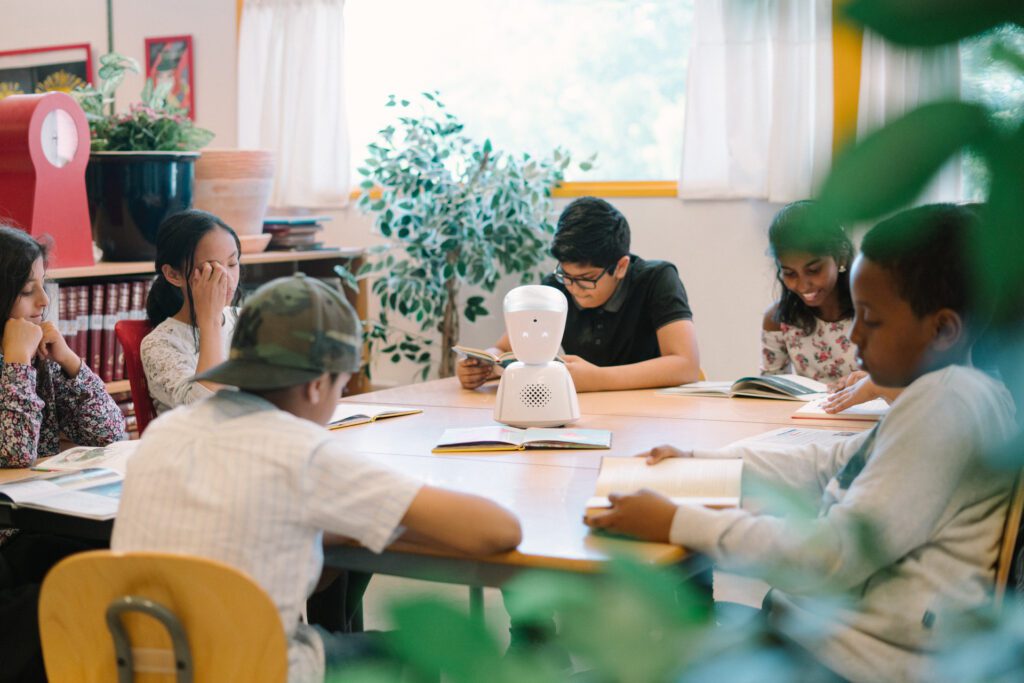 AV1 in use in a classroom. Photo by No Isolation.

That being said, mental health has not been very high on the agenda in Norway. The UK has been much better at highlighting the importance of talking about mental health. Norway is only catching up now. The flipside of having the luxury of being a welfare country however, is that you have time and energy to focus on these issues and we are now expecting more and more of ourselves. If you can be anything you want that leaves you much more vulnerable to not meeting your own expectations.

Do you know who you want to help next?

We would like to work with migrants and prisoners. New parents, especially first-time parents, who are significantly lonelier than the rest of the population. Young depression, in the age group 18-25, is where the highest suicide rates are. Also, the so-called ‘incel’ community.

Why are huge groups of young men feeling completely left out? There are so many things we would like to do.

We haven’t chosen our next group but I am hoping we will soon.

Covid-19 has highlighted issues such as inequality and isolation. Are you optimistic that this will result in real change and a more organised approach to combating isolation?

I am really not sure. Heading into this, I think I was more optimistic than I am now, to be honest. I think everyone who found social integration slightly difficult before Covid is going to find it close to impossible now. And I don’t think anyone has any overview of how many people that is. 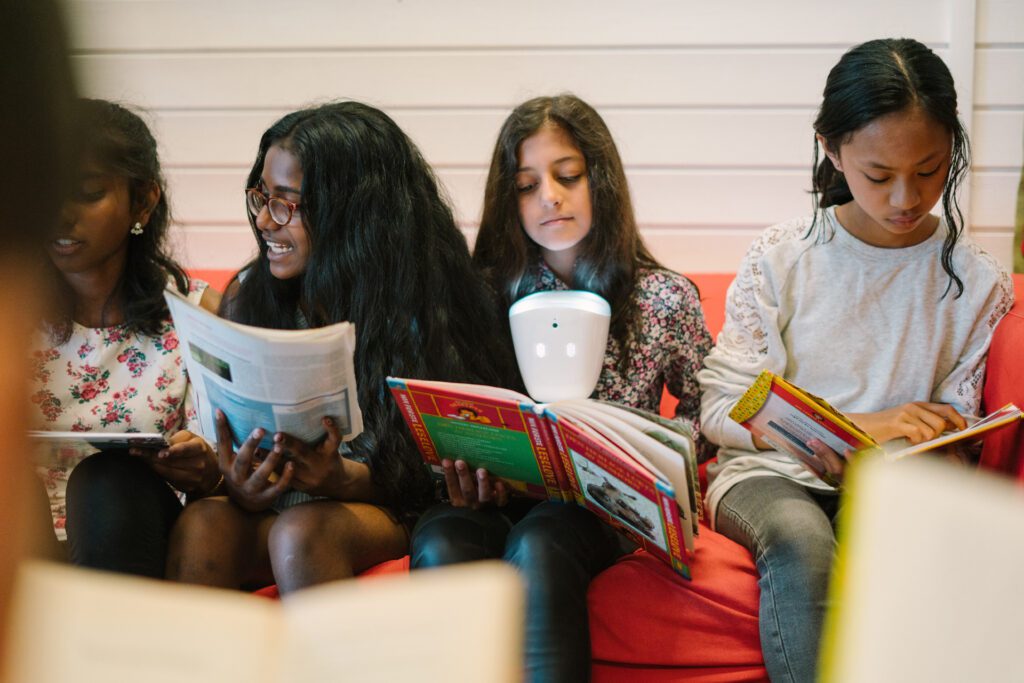 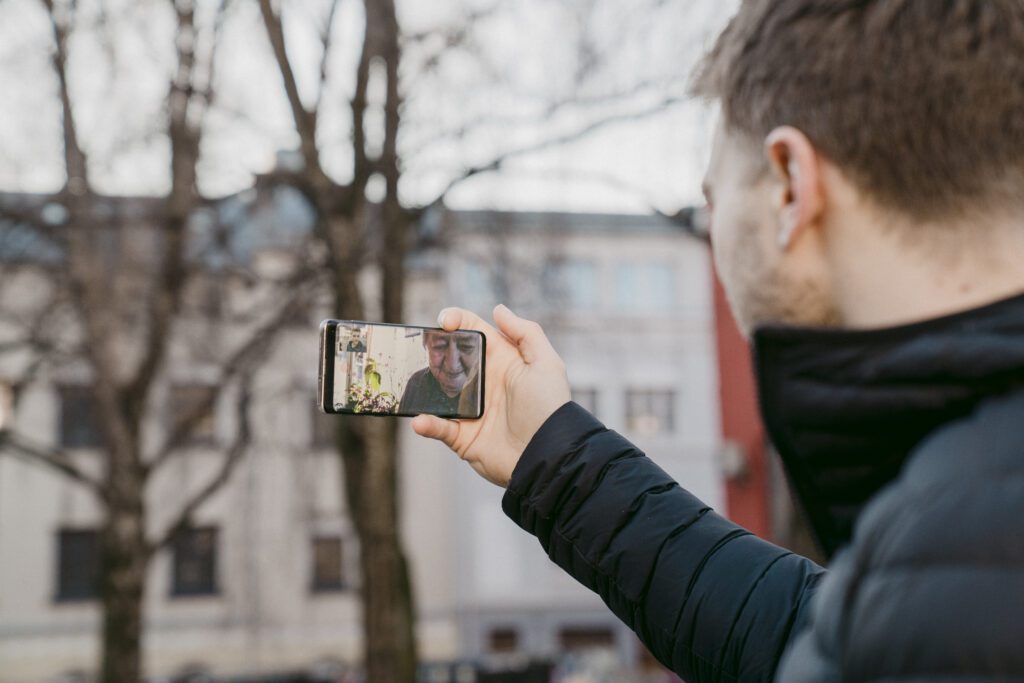 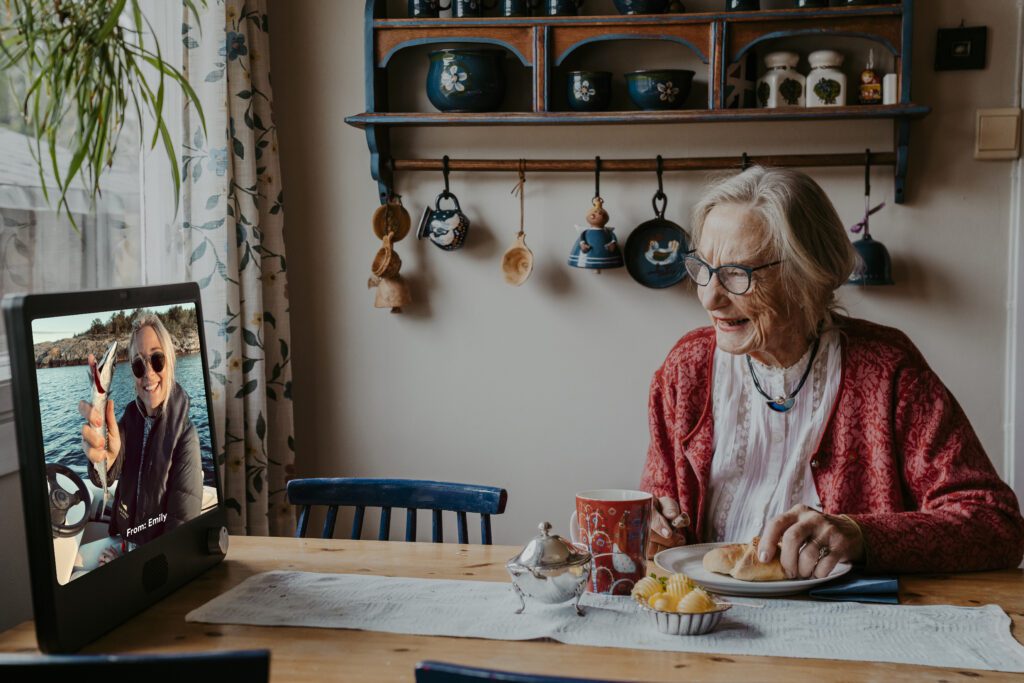 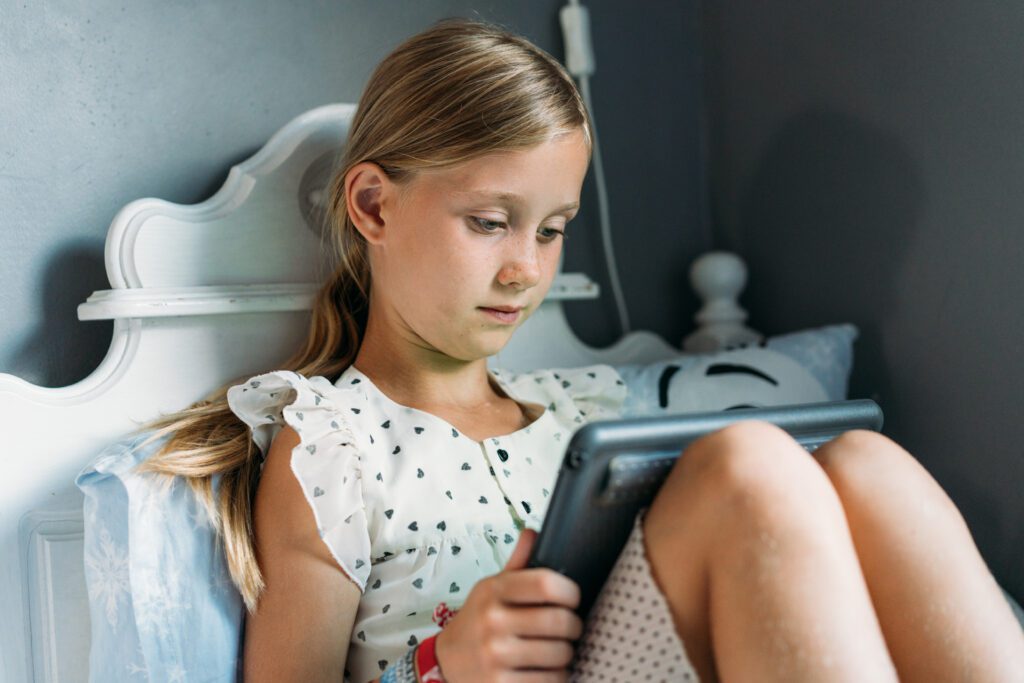 This is going to get worse, especially for the young population. A lot of people are going to be out partying, happy about things opening up, but for those who aren’t a part of that group, it is going to hurt so bad.

Some people who have trouble socialising in real life appear to have thrived on digital platforms during the past year.

There are a lot of people who have found new tools, which is brilliant. But if you have stopped all your regular social routines in the past few months and haven’t found online routines to replace them, you are going to struggle. A lot of us, myself included, have found it scarily comfortable to be at home. That’s why the next time someone asks me to go out and do something I am going to say ‘yes’, even if I don’t want to!

Top photo: No Isolation CoFounder KarenDolva holding AV1, a robot which allows children with long-term illnesses a presence in the classroom. Photo by No Isolation.

Giovanna Dunmall is a London-based journalist who writes about architecture, design and culture for publications such as South China Morning Post, Economist online, Conde Nast Traveller and The Guardian Categories