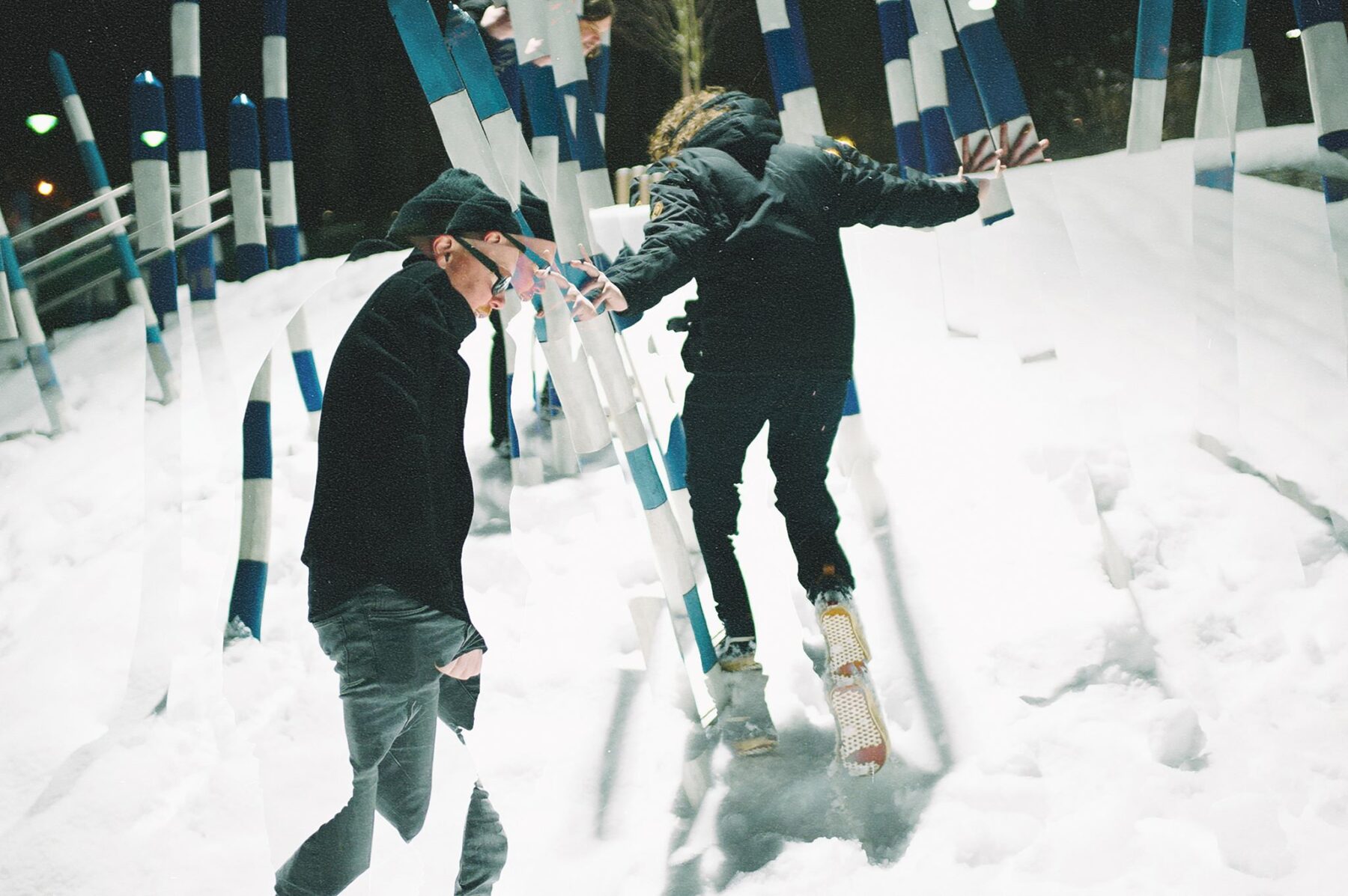 Despite only playing their second ever show at the start of last year, Spielbergs’ line up has been knocking about in Norway’s indie scene in various guises for a while now – from Grammy award-winning pop troupe Team Me to touring members of rustic rockers Lukestar. It only felt natural then that after too many nights on the road sleeping on strangers’ floors, the pair would come together and turn inwards to channel their creativity afresh. Fast-forward 12 months on and the band are preparing to release their debut, with The Guardian and NME already calling them as Ones to Watch in 2019.

From his flat in Oslo against the soft glow of the city lights from the window, drummer Christian Løvhaug finds a spot of downtime in between pre-tour rehearsals to talk recording, royal castles and rediscovering themselves.

As this is an Introducing article for Norwegian Arts, let’s get the introductions out of the way. Who are you, and what do you do? 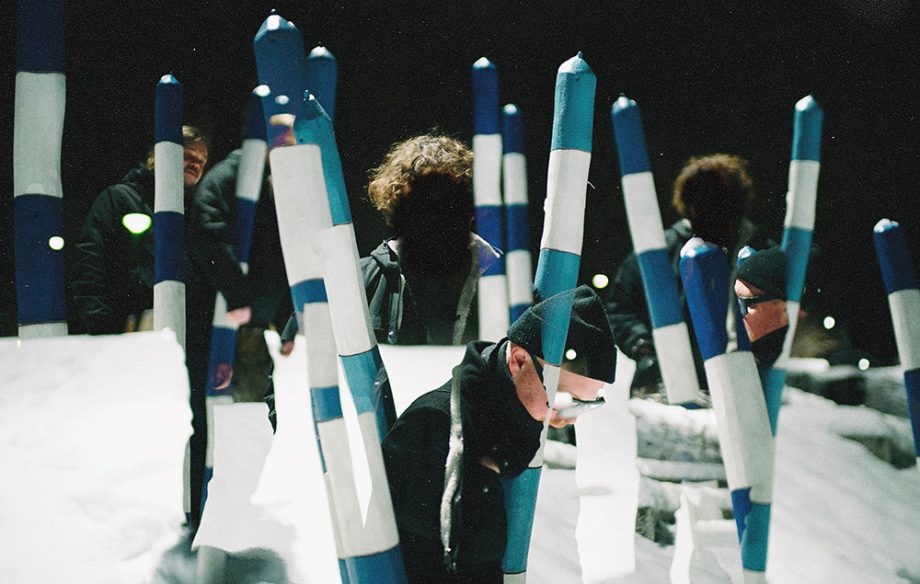 Take me back to the leap from DIY band to signed outfit. Is it true industry types saw you performing up in the North of Trondheim and were so blown away they started a label so they could release your music?

We played our second ever gig at the Norwegian showcase festival for Trondheim Calling in February 2017. All I can remember from that gig was the constant feedback from the monitors. After the show, two British, partly drunk dudes (James and Jay) came over to talk to us, telling us that they loved the gig. They kept writing to us on Twitter through the night telling us how much they loved one of our songs (laughs) so we continued chatting from there really. Originally they offered to do PR for us through their PR company.

Late 2017, I sent James and Jay a new song while down with a severe case of man-flu. We’d just started preliminary conversations with some other very interesting labels regarding the release of our first album when James emailed me back, saying they were seriously considering starting up a label IF we decided to go with them. With all the experience they had from different jobs in the music industry AND the fact that they are really good human beings focusing on being artist-friendly, it felt like a very easy decision to go for them. It has been like winning the lottery for us really.

Similarly, your coming together as a band felt very natural with both Christian and Mads setting up an “adult youth club thing” to get out of the house and make music. How often and where did you meet?

Yeah, both Mads and I really tried very hard not to do music for a period of three years or something, to see if we could live our lives without doing the music thing. Many years of gigging and sleeping on floors around the world without making any money didn’t really give us much and the joy of making music and being in a band was lost along the way. After three years of trying to rediscovering ourselves as something more than two guys playing music, we started to miss being creative – getting together for some drinks and a Friday jam. Also, yes, our girlfriends were quite sick and tired of us being home in a bad mood as well (laughs) so that’s how it started really.

Mads and I started jamming a couple of Fridays every month in a partly abandoned warehouse with the intention of having fun and enjoying music again. There was no direction or goals to it, to be honest. Just to have fun and enjoy making good songs. I don’t think we thought that we ever would record or release any of it, or even play it live. It’s safe to say a lot of things have happened since then. We asked Stian to join us around six months in and then we quite quickly had a bunch of finished songs. We recorded some of them as a demo, several of which ended up on our first EP Distant Star.

Two years on from its humble beginnings, Spielbergs’ debut album This Is Not The End comes out via the UK based newcomers, By The Time It Gets Dark. What can people expect?

I think the album has turned out just as diverse as we wanted it to be. We love albums and bands that dare to be diverse within an album. Bands like And You Will Know Us By The Trail of Dead and Norwegian band Motorpsycho have done it for years or the new generation in Wolf Alice recently. They combine the shorter, catchy songs with noisier tunes, really long jam-based songs and acoustic song into one album. That’s why we love them and most of their albums as well. We wanted to make something we could listen to ourselves, I can tell you this much. You will get plenty of guitars, bass, and drums in different shapes and moods.

What was the recording and songwriting process like for the album? Was it all done in Norway against a backdrop of mountains and glistening lakes?

Now that would have been some backdrop. It was more of an urban location in the middle of Oslo actually. We recorded the album with some very good friends of ours – Tord Ø. Knudsen (The Wombats) and Marius D. Hagen (Team Me) – and the studio that they are a part of called Stable Studio. It’s near the royal castle were the King and Queen live. I think it used to be the stable to some of the horses that belonged to the King’s sister (the Princess, presumably) or something many years ago.

Anyway, we recorded most of it during four or five long weekends. Luckily, we had a lot of songs to choose from since we had been and writing loads the year before. Some of the songs we made all together through and some of them Mads or Stian brought in as ideas and we put the finishing touches on them together.

Do you remember when you wrote your very first song and what was it about?

The first song we wrote and finished was actually from when it was only me and Mads playing as a duo. It was a punk song with Norwegian lyrics. I think it was around 1.30 min long. Who knows. Maybe it ends up as a B-side or a hidden track in the future. It is actually quite good now that I am thinking back (laughs). Not sure if the lyrics would work as good in English as in Norwegian though. The song was about how we all need someone to talk to.

Spielbergs is doing some dates in the UK to support the record release in February, what’s the reception been like here in the UK so far? Does it help to have a UK based label in terms of touring outside of Scandinavia?

Yes, our first UK headline tour. We are super excited. I think the reception has been a bit overwhelming, to be honest, and the press has been very kind to us. Lovely backing from NME, Kerrang, The Guardian and loads of other magazines and blogs, bands, BBC1, BBC6, and Amazing Radio. We are really fortunate to have a UK label that has introduced our music to lots of people and that we work with Jamie Wade at X-ray Touring as well. Without them, touring outside of Scandinavia would be a bigger challenge and probably not even an option.

Norway does seem to be having a bit of a resurgence lately with some incredible indie acts like HighAsAKite, AURORA, and Susanna – why do you think that might be?

Propper pop stars if you ask me. A lot of talent and hard work, I reckon. They are only the tip of the iceberg though. There’s an enormous amount of talent in a wide range of genres from black metal to electronic music to pop to indie. It really has exploded in recent years.

Surreal! But it truly is a good start to 2019, innit? To be fair, the response to the EP and now going into the album has taken us a bit by surprise, but we must be doing something right and maybe rock is not entirely dead after all? Hopefully, people will enjoy, stream and buy the album so that we can do a lot of touring in our second homeland of the UK this coming year. And we cannot wait for the first dates from February 11th and to show our firstborn to the world.

Spielbergs’ debut, This Is Not The End is out February 1st on By The Time It Gets Dark.
Read more about their upcomming UK tour from February 11-15.