During the first London lockdown in March 2020, the Norwegian author and illustrator Cecilie Maurud Barstad began to notice her neighbours – and draw them.

At home in Highbury Square, the redevelopment of the former Arsenal stadium in North London, Maurud Barstad sat on her balcony, watching the comings and goings in the communal garden (the former football pitch). She began to sketch and create short texts about the figures, imagining stories about what they might be doing, thinking or feeling.

Born in Tonsberg on the Oslo Fjord, Maurud Barstad has lived with her partner Gilles Jourdan in the Highbury development of 650 sustainably-designed flats for the past five years. The couple met in 2002, during a fire drill break from their studies at Central St Martins, and today run a design studio for clients such as Harvey Nichols and UNICEF while raising their young daughter Niki (named after the artist Niki de Saint Phalle).

A year after sharing her lockdown compositions with friends, Maurud Barstad has now brought them together in the book Rear Window. As the limited-edition volume is published, Norwegian Arts spoke to Maurud Barstad about bookbinding, peering into the lives of others and the colour of sunny days.

Can you tell me a little about where you live?

It used to be the old Arsenal football ground before they moved to the Emirates Stadium. All the flats have balconies, there are a few courtyards, and then there is the big football pitch, which has been converted into a garden. It’s far enough away from traffic, so it’s quiet, and the garden in the middle is private. It’s modern, simple and easy. Initially, there were just a few neighbours we said hello to in the hallway, but that all changed when the pandemic hit last year. People became more friendly. Everyone would say hello and have a chat in the garden.

You began spending time on your balcony – observing, sketching and writing about other people. When did you have the idea of a book?

I started to share my sketches and stories with my friends on Facebook. This generated a lot of conversation, and people seemed to relate to them more than I had expected. Then a friend of mine, Nina Ansten, saw them, and she had the idea of making a book. We began to work on it more seriously.

What were you looking for when you made your drawings?

I always liked the Hitchcock film Rear Window, where the protagonist, sitting there looking out of his window at all his neighbours’ private goings on, uncovers a murder. Of course, I wasn’t looking for trouble. Some people here haven’t got any curtains, so that, for me, was an open invitation. Generally, people were just cooking or eating. I was surprised I didn’t see anything else, actually. I didn’t even see any naked people! 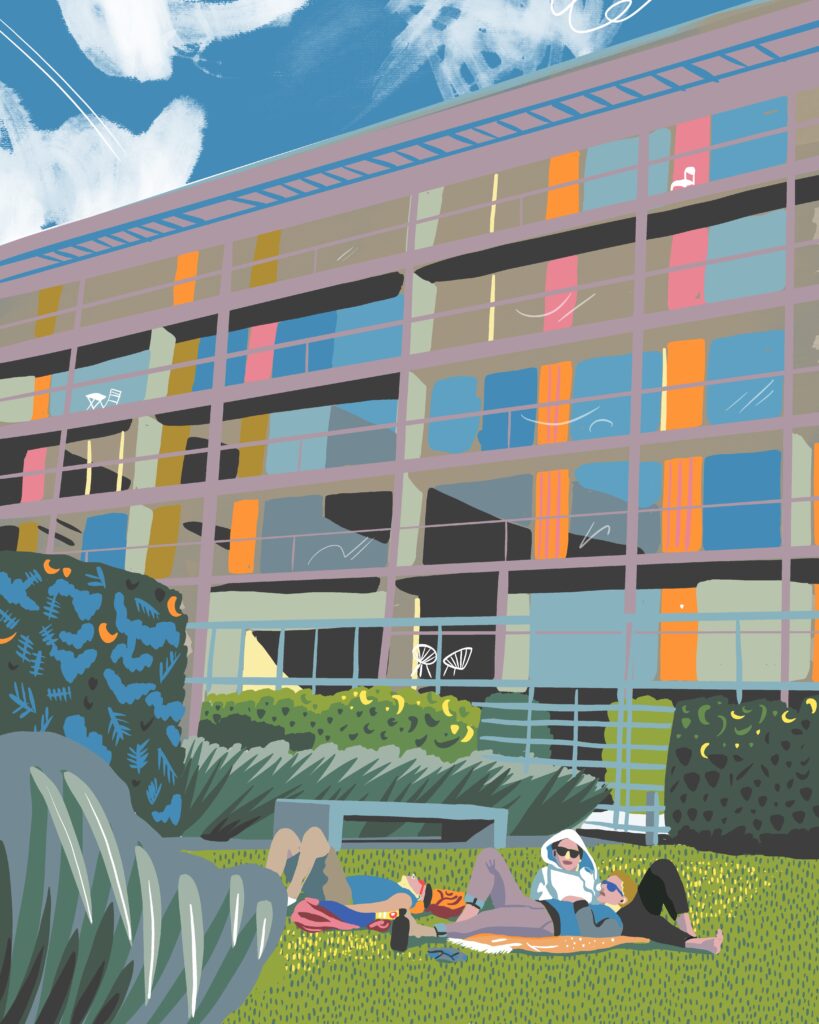 I’m always looking around me – not just for this project. If I see an amazing colour combination, I have to capture it. That’s the way I was seeing things here: the spring light, that kind of super-green on the trees, new leaves, the sunshine coming from behind and casting a reflection on the side of the building and making fantastic waves on the windows. I didn’t look for anything else beyond this, really. I let the moments come to me.

Did the stories and images always arrive together?

No, not always. Sometimes I wrote the story first and then needed an image for it; sometimes it was the other way round.

Did you write the stories in Norwegian?

I wrote mostly in Norwegian, with a few in English. We have an editor to translate and tidy up the rest. I could have written both, but I liked the fact that the project became a collaboration with more people involved. 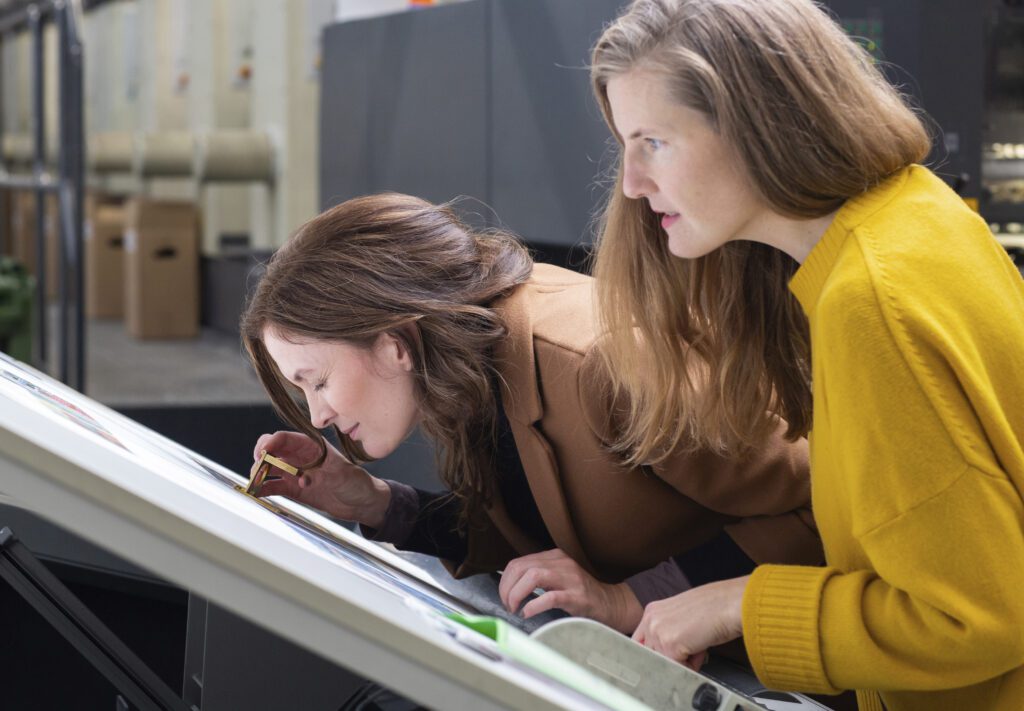 The book was printed and bound in Skien, Norway, by ETN Grafisk – a climate-neutral printer – and Bokbinderiet Johnsen. It is a craft production with a choice of four distinct covers, printed in an exclusive limited edition of 700. Can you say more about this element of sustainability?

That is also down to Nina. We went to the bookbinders to choose fabrics they already had, rather than sending the design by computer and ordering metres of cloth, most of which would be left on the shelf. And we did the same with the paper. The book size is determined by how many times the paper folds, so there are very few offcuts. I used to work as a bookbinder here in London at the Wyvern Bindery, so I know a lot about the craft.

We are also making an artist’s edition with 20 copies. They will probably have silkscreen covers. I’ve always loved artists’ books, and, when I worked at the bindery, I used to make artists’ book boxes for the photographer Martin Parr. You would open up the box, and there would be a limited-edition print, gold writing, and a lot of extra effort – like a gift. 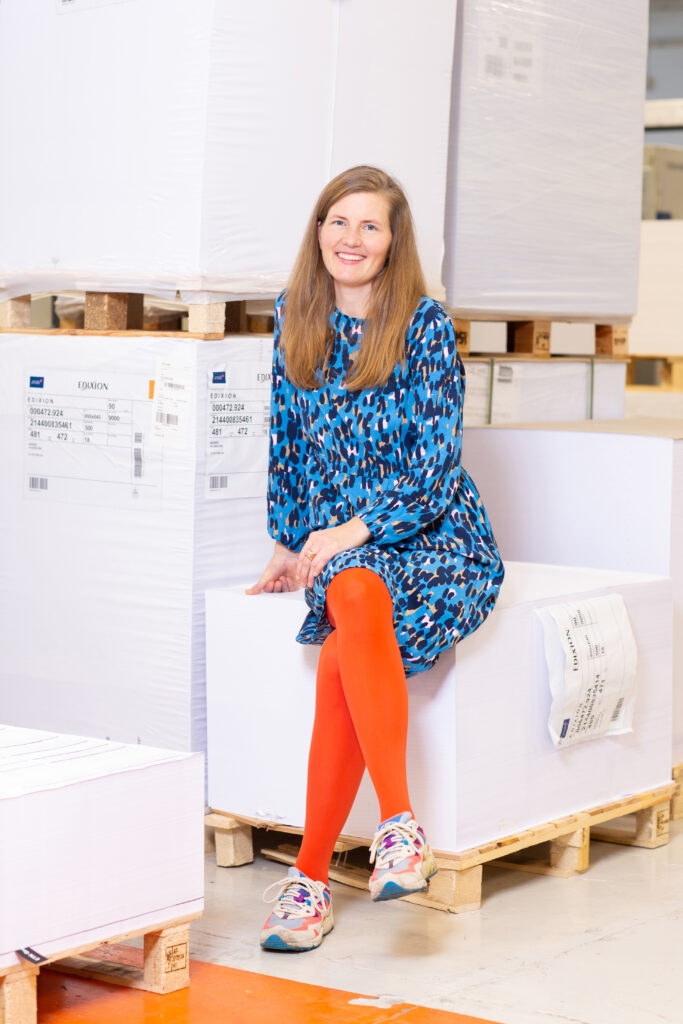 There is a quote from you on the press release: “I have created one colour palette for sunlit days, one for evening light, and one for gloomy afternoons”.

I never used more than 20 colours. Some of the drawings are very sparsely coloured, because it’s night or evening. Towards the end of summer, some of the drawings also became very simple, and were done much more quickly, because I needed to get the project finished. But it was great to challenge myself to do some views as simply as possible, using just three or four colours, big fields, and block colour. 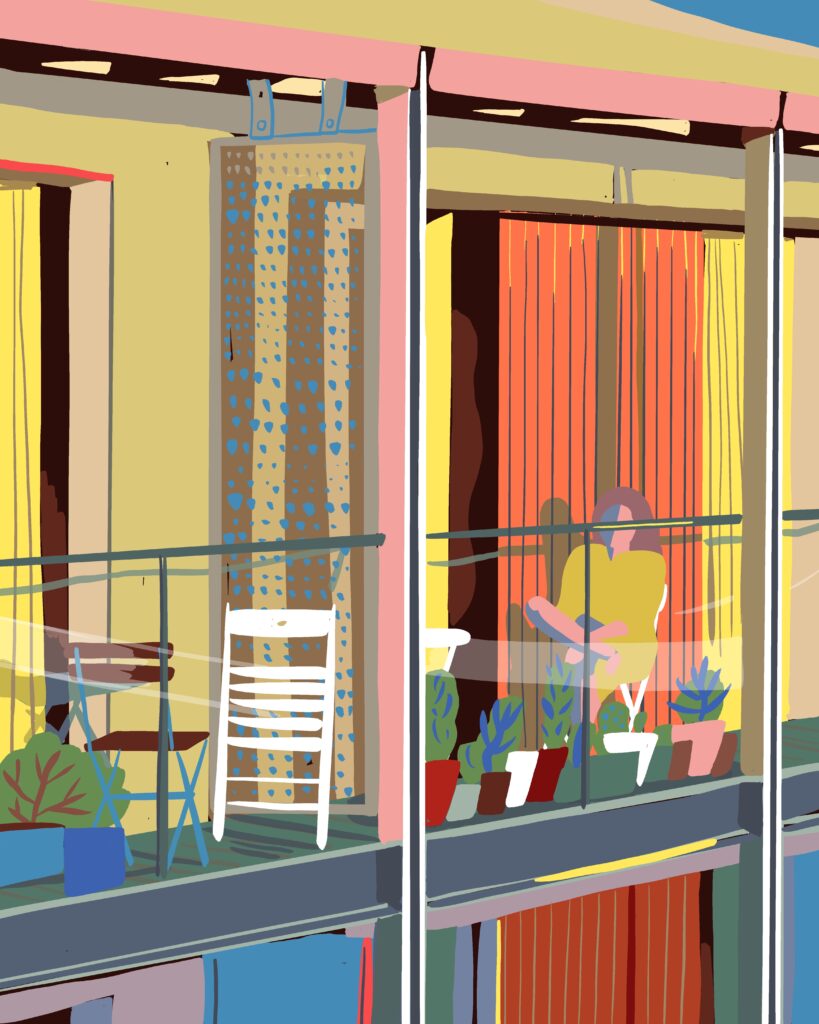 Miss Lonelyhearts by Cecilie Maurud Barstad (courtesy of the artist)

What medium were you working in? Also, the frames of the balconies, windows and doors add to the graphicality of the composition – even though you often render them askew. Is this typical of your style of illustration?

It is interesting because I didn’t really think about that until later when people started to comment on it. I’m not very good with perspective. I wasn’t trained in it. I love drawing things from lots of different angles. I look for the composition that I feel sits within the frame. As for the medium, it was a mix. I did some pencil drawings, but most of them were done on my iPad and coloured digitally. One of my plans is to have an exhibition somewhere down the line and to work on some linocuts and silkscreens. I love printmaking.

In the introduction to the book, you write: “As artists, we have a responsibility to depict the spirit of our times, to capture a picture of life as we know it”.

Exactly. I feel this is very important. That’s why I started to post the stories in the first place. Life is serious, and sometimes things make us panic, but there is a still hope. There are always shifts and cycles, and things will get better – maybe not everything, but that’s life. Some things for better, some things for worse. I know it’s not that easy, but things change all the time. I wanted to capture those moments.

I think it’s really important to question what your dreams are and then make a plan. If this is where I am today, and this is the finished book, or whatever, what are the missing links in between? It really is as simple as that. Lots of us say no to something before we believe in it. This book got made because I believed in it, and Nina believed in it. And then the people who bought it on pre-sale believed in it. You make people believe, and it’s going to happen. Anything is possible when you put the forces together.

You can buy Rear Window at anstenpress.no

25 May 2021 / Anna McNay is a freelance art writer, editor and curator. She regularly contributes to a range of art and photography journals, including Studio International, Art Quarterly, The Flux Review, Photomonitor and Elephant magazine. Categories