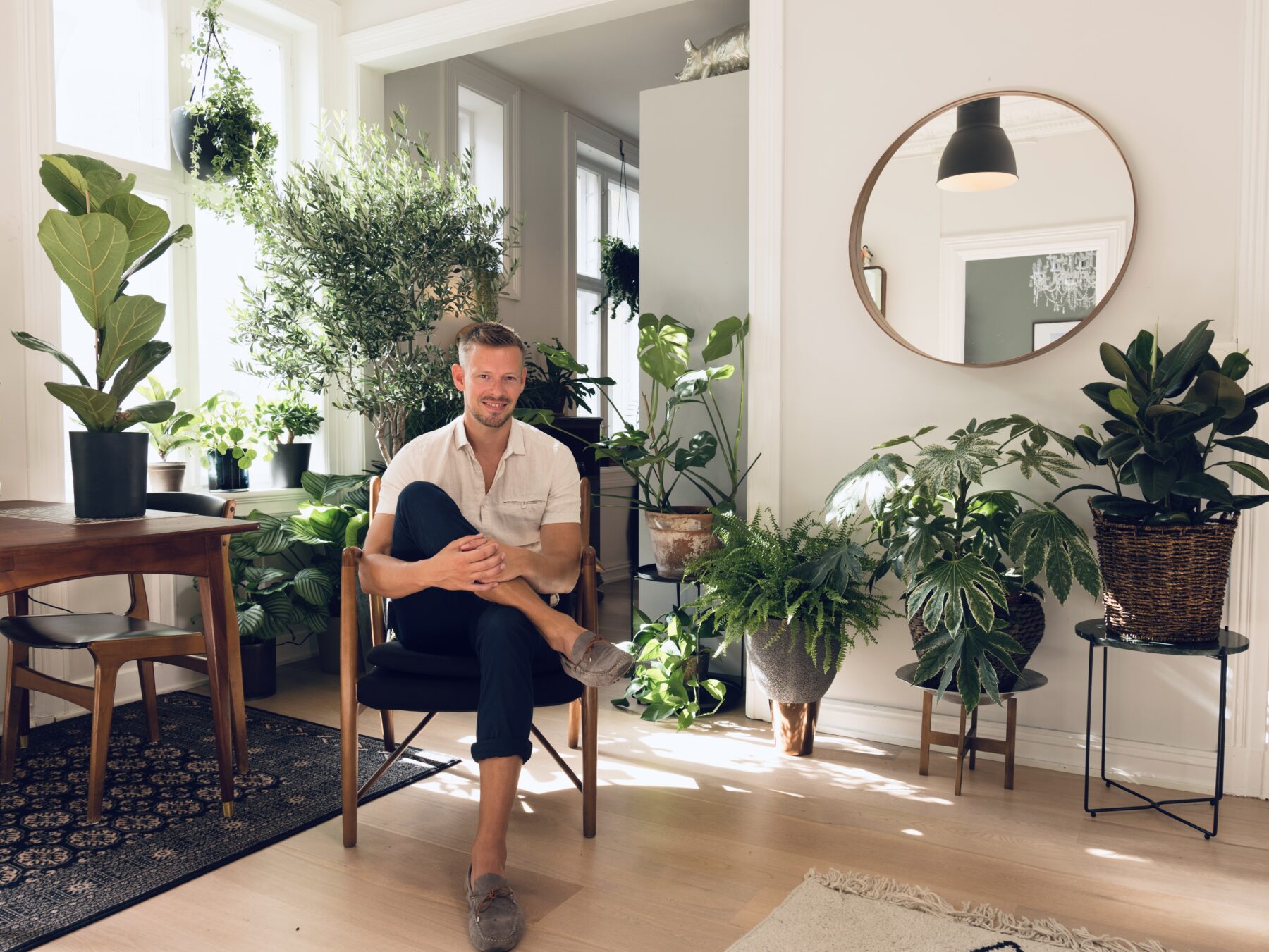 The trend for growing plants is blooming. Even in Norway, as highlighted by Anders Røyneberg’s new book Green Home: The Joy of Living with Plants. Peppered with beautiful photographs, it’s filled with tips on how to succeed with tropical plants in the cold north, species like those that fill Røyneberg’s small Oslo home, a flat of just 50 square meters (which can also be seen on his popular Instagram account @arcticgardener). 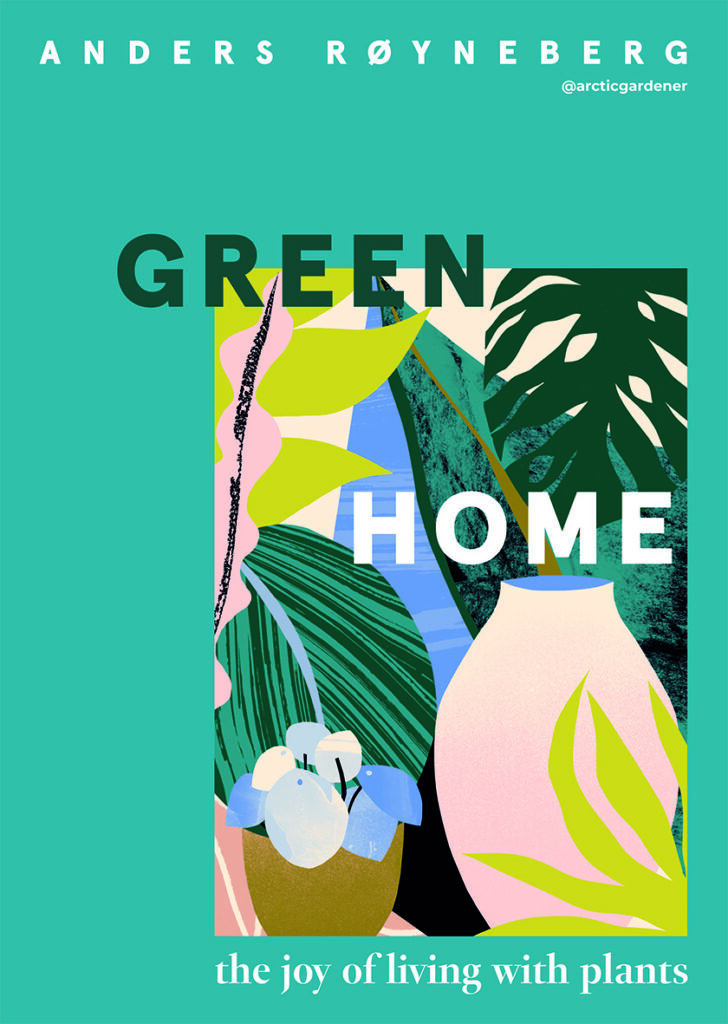 Cover of Green Home. Published in the UK by Hardie Grant Publishing.

Røyneberg’s project began with a heartbreak: following the end of a relationship, he turned his energies into making plants grow. Over 300 plants later – now tended to with the help of his new partner, Erik Schjerven – he has written a book that he hopes will inspire others to furnish their homes with green leaves. 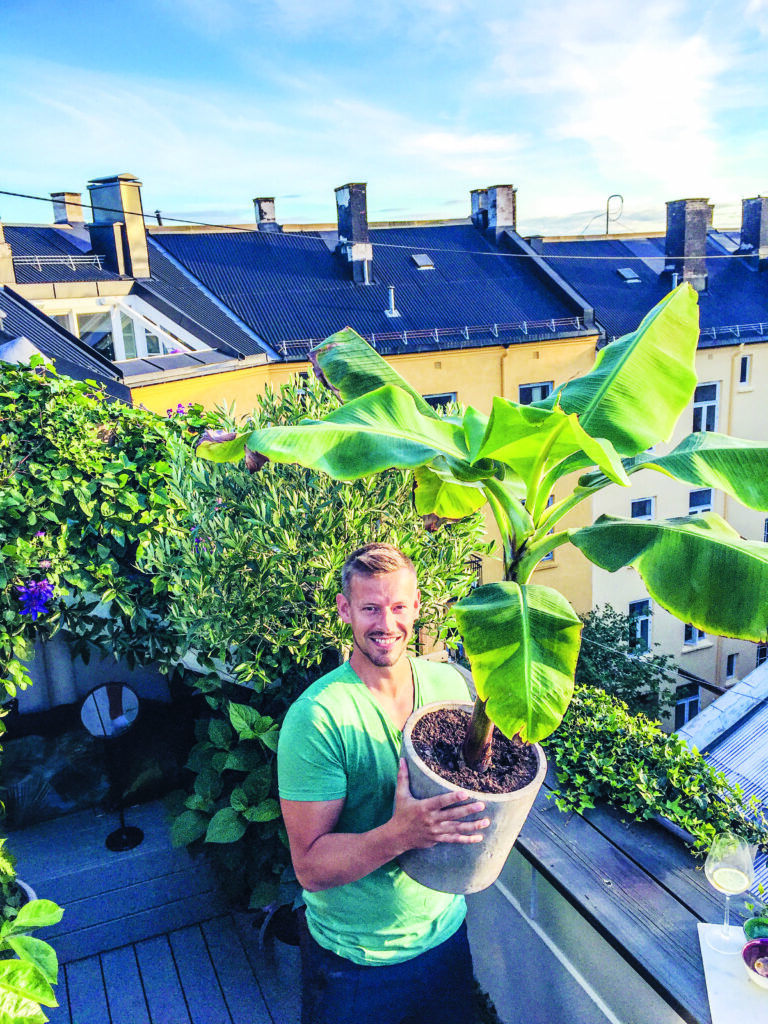 Anders Røyneberg on his balcony in Oslo. Photo by Erik Schjerven

Taking time out between his day job as a psychiatric nurse and his watering schedule, Røyneberg talked to Norwegian Arts about the benefits of being surrounded by plants, how the pandemic has increased our need to be closer to nature, and why he believes the younger generation is taking the plant trend so seriously.

Why did you write Green Home: The Joy of Living with Plants?

It actually started from a break-up. I became single, moved into a flat on my own in St. Hanshaugen in Oslo, and started bringing in more and more plants. I didn’t think of it much back then, but looking back it probably was a substitute, being something that made me feel calmer and better. Most people who’ve been heartbroken know how tough it can be. This became one of the ways that I dealt with it. The thing about plants is that once you start getting more of them, it can quickly grow into almost an addiction, at least for me that’s how it was. It’s quite contagious. A big reason why I wanted to write the book was to inspire others beyond the Instagram account. 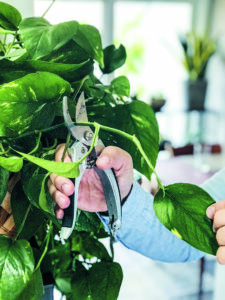 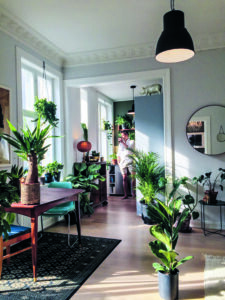 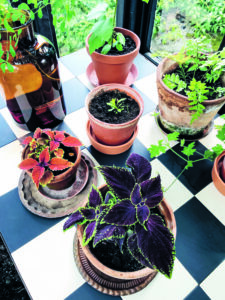 You now have more than 70,000 followers on your Instagram account. How did it start, and did you plan for it to grow this much?

I started posting pictures of plants on my Instagram account @arcticgardener in 2017 and quickly got a lot of attention, particularly from big cities like New York, London, and Sydney. I was writing in English to reach more people, and my audience is now around 40-50% Norwegians, the rest is international. Myself and my partner Erik wanted to make a book about it and tested the idea with different publishers. We got a book deal with Cappelen Damm and the book was published in Norway two years ago. Last week, I was told that the book is in its 8th edition. It’s almost selling as much now as it did when it first came out, which I think has a lot to do with [the effects of] Covid.

Has the Covid pandemic increased people’s desire to have more plants at home?

Absolutely! It has to do with nesting. During Covid we’ve been increasingly more focused on our homes and nature, making spaces more pleasant, safe, and comfortable. With that mindset, green plants fit in very well. The plant trend has become more accessible across a range of people. It’s less bound to age, gender, sexual orientation, and ethnicity, which is good. 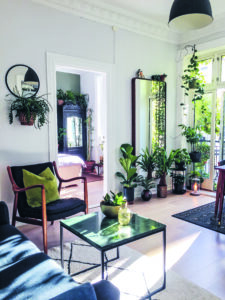 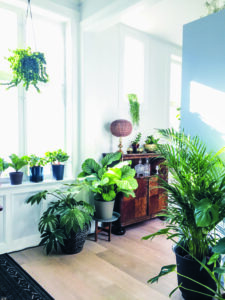 I think there’s been an increased focus on plants because they represent something quite opposite to the society that we live in – being on social media, always being available and in a rush, being under a lot of stress and pressure. Plants on the other hand, grow slowly, they don’t go anywhere. I think that’s why so many young people have an interest in plants.

What advice would you give people who want to have plants but don’t have a lot of space?

I usually say less furniture, more plants. It’s not for everyone, but we have gotten rid of quite a few pieces of furniture over the years. We now have a green plant wall where the TV used to be, a literal ‘slow TV’.

How did your fascination for plants develop?

I grew up on a farm and was taught from a young age how to make plants thrive and grow. Being a farmer was a bit lonely and I moved to Oslo where I became a psychiatric nurse and a sexologist, before diving deeper into psychology and trauma treatment. I like to think that working with mental health and plants has some beautiful commonalities: it’s about making something sprout and grow, become healthier and stronger. In the plant world there’s something called ‘traumatropism’ which means that when a stalk breaks and the plant survives, new shoots often grow from the breaking point. What breaks becomes stronger, robust, and bigger. Trauma tropism also exist within psychology, if you heal after a trauma, you can become healthier, stronger and grow. 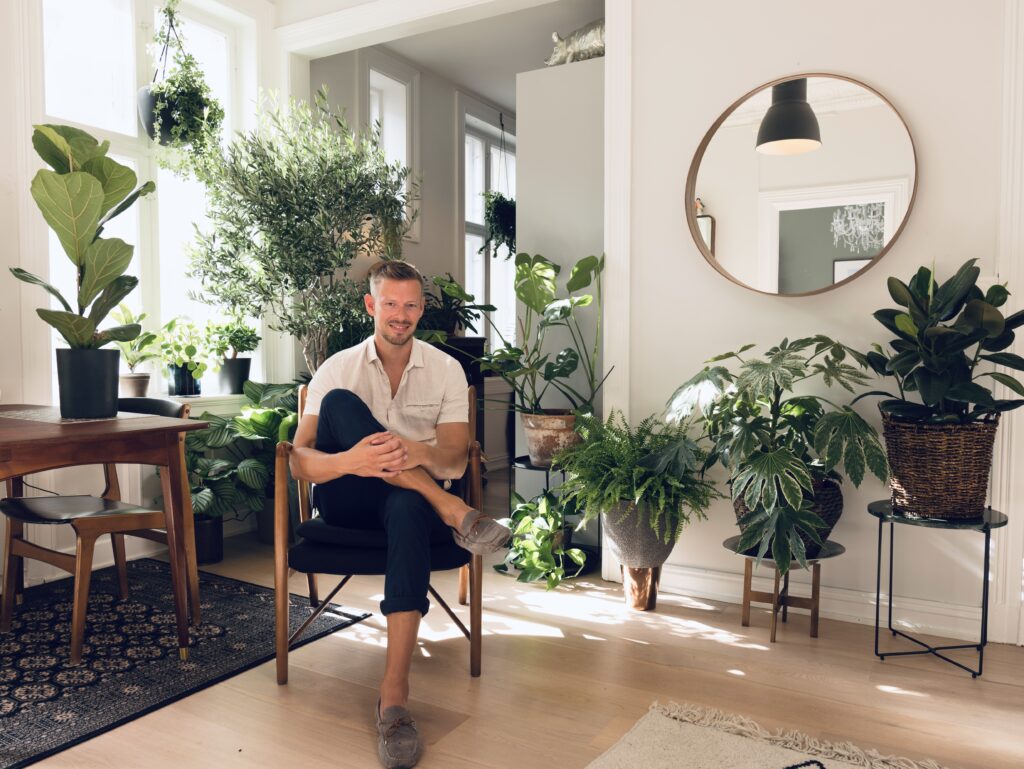 Anders surrounded by plants in his Grünerløkka flat. Photo by Morten Krogvold.

I don’t think it is a coincidence that people take care of plants when they’re stressed out, struggling with anxiety or are depressed. There’s something very grounding about it. Plant therapy is very important for me; I also keep a lot of green plants in my office.

How many plants do you currently have in your home?

Living in Oslo, there were over 100 plants in the flat. We’ve now moved out of the city and live in a house with around 300 plants. We removed part of the second floor to gain space for some truly tall plants like palm trees. We are striving towards achieving the atmosphere of entering a botanical garden, the smells, the temperature and so on. I think it’s beautiful to give away plant cuttings, and the best gift I can receive is when someone has spent time, effort, and love, growing a plant from a cutting. Green Home tells you how to multiply the plants that you have, to make it cheaper to have plants. 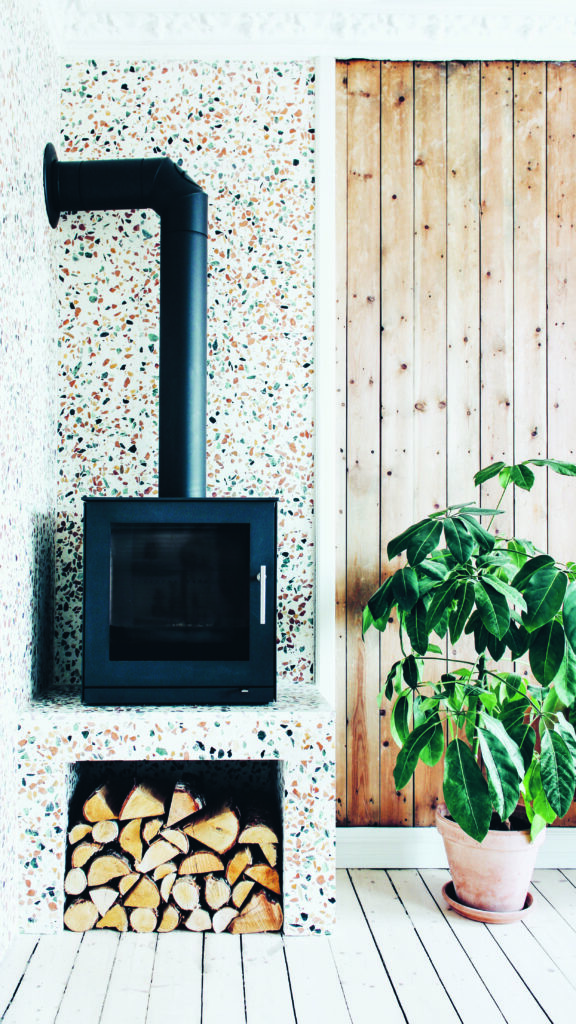 Detail picture from the flat. Photo by: Steffen Olsen

That number of plants must surely require a well-established watering routine?

If you’re a beginner, it’s smart to have a watering system. You can divide the plants into tropical plants and desert plants, such as succulents and cacti. But as you develop, you become more observant and gain more knowledge of what they need. It takes time. Usually, you kill a plant before you are successful with it. Even if everything looks great on my Instagram, my plants can also die. My best advice is to try to understand the plant’s needs depending on where it comes from, and replicate it at home. Tropical plants for example like a good shower!

With many of us working from home, there’s been an increased interest in the positive effects of plants.

This is also what Green Home is about. We write about the philosophy behind the green plant trend, which I believe is part of the ‘green change’. Young people particularly are very interested in taking care of plants, they’re hungry for that knowledge. Another important element is to help people succeed with their plants. The book contains basic tips, particularly for those living in bigger cities with less space, colder weather and less light.
I’m also interested in the visual aspects, plants are beautiful, and I think that does something to us, just like growing up in a concrete city environment impacts us. Finally, the book is about plants being healthy for us, both when it comes to improving air quality, but also having a positive impact on our mental health. 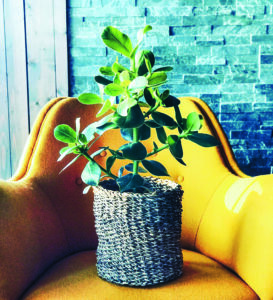 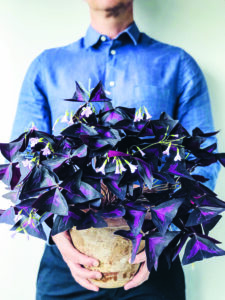 Would you say that Green Home is also a book for novice gardeners?

I would say that’s the main message of the book: that anyone can be successful with plants at home. It also contains detailed information about different plants, for example which plants can live under challenging climate such as the Nordic countries. If I can make my plants thrive in the cold climate of Norway, you can make the plants thrive everywhere. People are also attracted to the Nordic lifestyle. The appeal is a combination of Nordic interior design, the Nordic light, and the green plants; seeing plants indoors with snow outside – it gives a unique visual impression.

If you had to choose one plant, which would it be?
I would choose a tropical plant called Calathea orbifolia, which I call a Colombian Beauty. All homes need an eye-catching plant that stands out, and this is one of them. 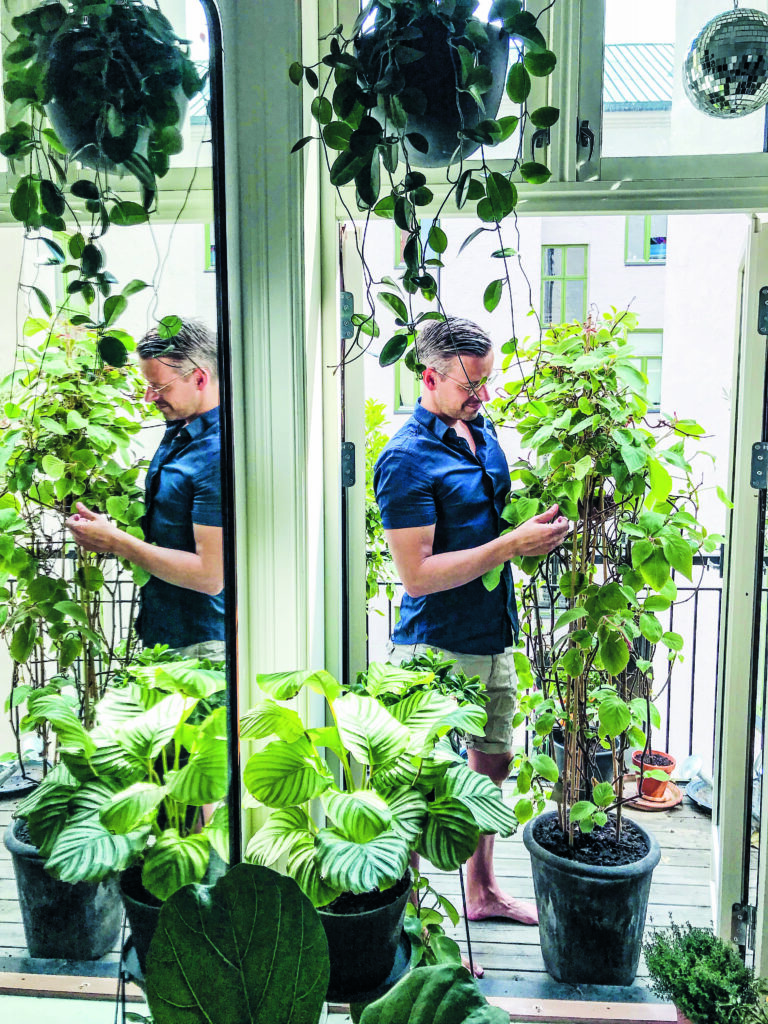 Anders with his Calathea (next to the mirror).

And if you were to suggest one plant for someone who is starting out?

There’s a plant called Chinese Evergreen (Sjømannstrøst in Norwegian) which was a common houseplant during the industrial revolution in England. Despite all the smog, the plant managed to live. Having lived through such challenging conditions, the plant survives quite a lot. So that would be a good plant to start out with.

Do you have any books or social media accounts on plants that you would recommend?

The plant part of social media is very nice. It’s part of the effect that plants have: calming and not confrontational. Plant people are rarely bullies!

Books: Urban Jungle: Living and Styling with Plants by Josifovic & de Graaff and The New Plant Parent by Darryl Cheng.

Green Home: The Joy of Living With Plants is published on 15 April by Hardie Grant Publishing

Marte Eide is an arts and communications adviser at the Royal Norwegian Embassy in London. Categories