Film maker and musician Deeyah Khan fled from Oslo to London at the age of 17 after repeated threats from the Norwegian Muslim community. Since then she has explored the dangers of creating a “them” and “us” and the explanations behind people’s beliefs and actions. Now her documentary White Right: Meeting the Enemy is nominated for a BAFTA for Best Current Affairs Programme. Norwegian Arts’ journalist Luke Slater talks to her about fear, success, vulnerability and the possibility of change.

“I consider you a friend at this point and I would personally hate to see you go. What I would be doing is ensuring the preservation of our race and my nation. That’s the only way forward and I would have to make sure that everyone who was ordered to do so would leave.”

This unusual and deeply uncomfortable exchange between the National Socialist Movement’s Brian Culpepper and documentary-maker Deeyah Khan sums up much of the latter’s BAFTA-nominated film White Right: Meeting the Enemy.

It also reflects Norwegian-born Khan’s approach to film-making – being part of difficult conversations that few would desire. To discover what motivated Khan to go so deep into the murky world of neo-Nazis, it’s necessary to look at her own story; one filled with sadness, success, threats of violence and an undeniable creative desire. 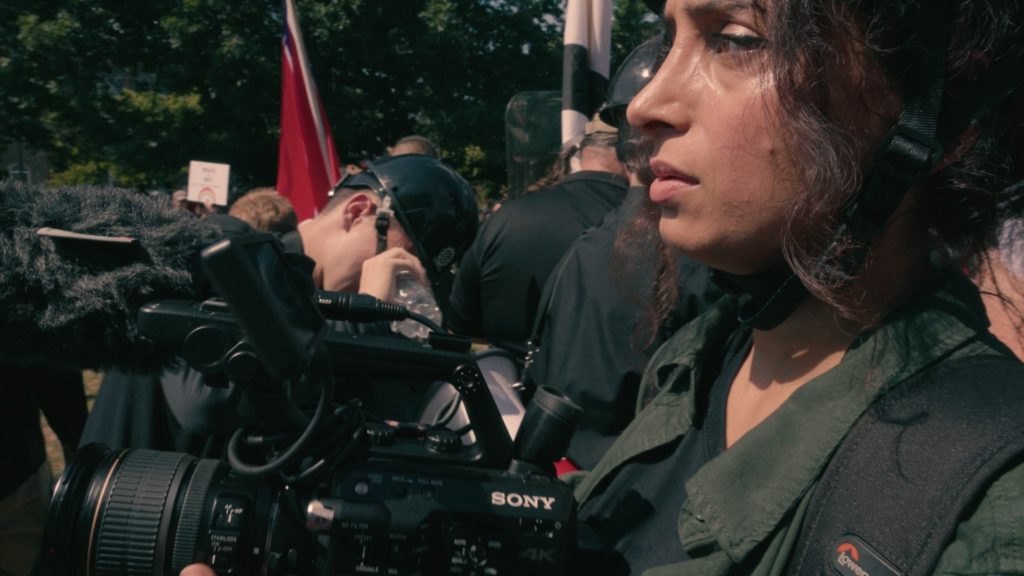 Deeyah Khan at the Unite the Right rally in Charlottesville, 2017. Photo: Fuuse

Deeyah was born in Oslo to a Pakistani father and an Afghan mother. It was here she was raised in a “very liberal and supportive” household. She became a musician and singer in her youth but this was when that trouble arrived on her doorstep. Groups of men from her father’s community would visit their house to register their disapproval and ask him to make her stop.

“My father would only show them the door. He would say, look, it’s my daughter, my responsibility and nothing to do with you,” Khan says. As she became more successful in Norway, the threats increased and her family became isolated.

She was attacked at her own concert and received constant threats of violence and worse. Then Deeyah’s mother told her that her family could no longer protect her. She soon packed her bags and moved to London.

“I remember just staring out the window going: now what?”

She started her new life as a 17-year-old in an unfamiliar city, occasionally returning to Norway and even then, only after a few years. Khan began to make music again. But the threats returned. This time she chose not to fight it and moved to Atlanta, Georgia. Here came a turning point.

It was especially hard to have sacrificed her life for a pursuit that was nothing but a source of pain and difficulty. “I remember just staring out the window just going ‘now what?’. I don’t know what to do any more with myself,” says Khan.

Throughout it all, Khan received messages from people seeking support, particularly young Asians. This triggered Khan into volunteering for organisations in the UK for women and young people. Honour violence was particularly close to her heart and an area that she desperately wanted to approach, somehow.

“I remember thinking at the time, how do I do that? I’m not an academic. I’m not a politician. The only thing that I know is the kind of space of creativity and artistic expression,” she says.

Khan considered various outlets but she knew the best way to tell this story would be a documentary. The skills for this would be learned from scratch, with hours sat online Googling manuals and instructions. 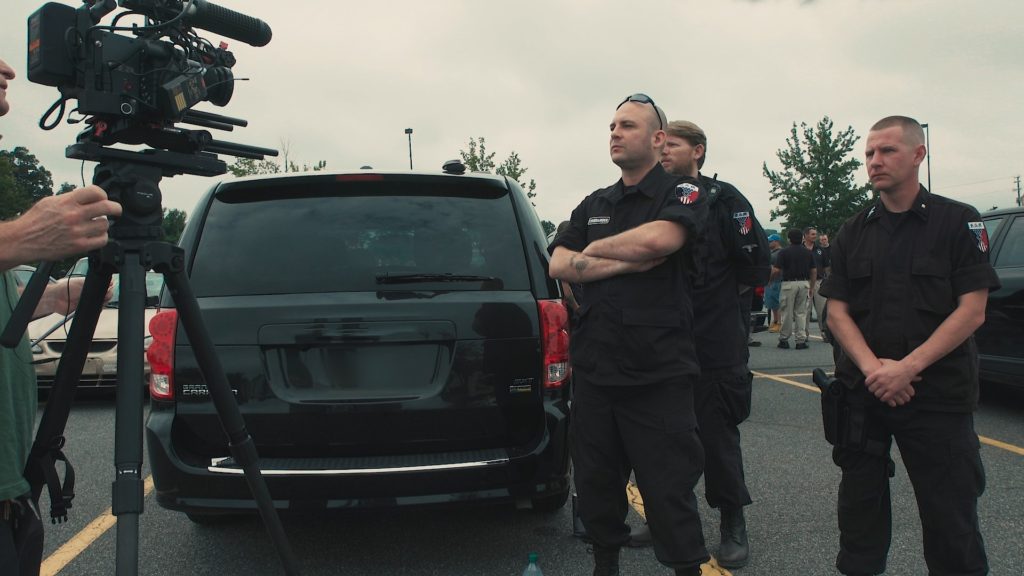 Representatives from the counter-protest at the Unite the Right rally in Charlottesville, 2017. Photo: Fuuse

Four years in the making, Khan’s first documentary was Banaz: A Love Story. The film deals with the 2006 honour killing of Banaz Mahmod, an Iraqi-Kurdish woman living in London, and the determined actions of Metropolitan Police Detective Chief Inspector Caroline Goode to fight to prosecute her killers. It got nominated for an RTSA and and also won an Emmy and Peabody Awards.

“My purpose is to create work that increases our understanding of each other.”

“Banaz’s story contains all the failures and all the problems and everything that we need to understand and examine much closer. But her story, because of Caroline, contains the solution. The way to stop this is we actually have to care,” Khan says.

This approach firmly underpins her work and worldview: “My purpose is to create work that increases our understanding of each other. In that process, we can find a better way of living with each other, through understanding and through being open and honest and having the conversations that are quite difficult to have.”

Art and stories, she says, can create cracks in the impossible, seemingly impermeable surfaces of the taboo, something used to great effect in White Right. “Hopefully through those cracks, if we can create just a moment where we can recognise ourselves in each other, then that understanding becomes much more possible,” she adds.

“I have always been interested in racism in general because I have experienced it from a very early age, having had very difficult experiences with neo-Nazis growing up.”

The catalyst for looking at the far-right, though, was created by the extreme reaction to a BBC interview she gave on multiculturalism. Her point was that all cultures must work together but it was one phrase – “Britain is never going to be white again” – that was the spark for more hatred.

“The death threats that I got were insane. The volume of them; the intensity of them,” Khan says. This kind of vitriol was nothing new, but it set something moving within her. “I have always been interested in racism in general because I have experienced it from a very early age, having had very difficult experiences with neo-Nazis growing up. I’m going to go to see if I can find people who subscribe to these views and see if any of them would be willing to speak to me.”

Getting anyone from the American extreme right to speak to her proved unsurprisingly difficult. But there were some. This was not, though, going to be a documentary about the ideology of neo-Nazis that would focus on hate. Khan’s aim was to see if the “monsters” she had been afraid of as a child had something more to them. “I already know their views. I wasn’t interested in what they think. I’m interested in why they think it and what kind of human beings they are,” she says.

White Right is fundamentally uncomfortable viewing from the start. One of the first figures to appear is Jeff Schoep, the leader of America’s neo-Nazi National Socialist Movement (NSM). Initially Schoup had granted Khan an hour interview. On camera, he is clearly guarded and wary of Khan’s motives. In the end, though, they spent five hours together. 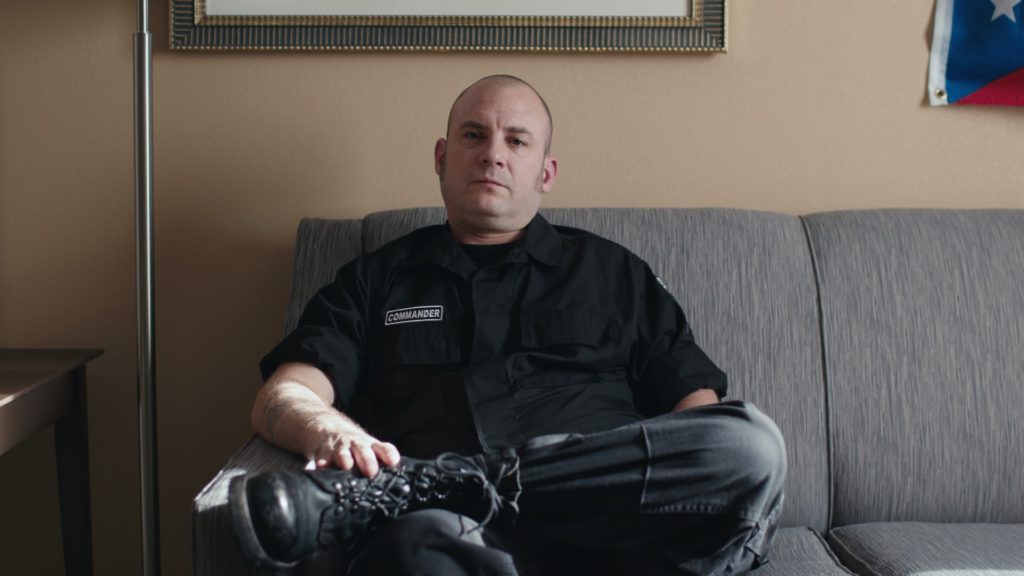 White Right, though, wasn’t all about getting neo-Nazis to open up. There were more than a few moments of terror and danger being a Muslim woman with a camera around neo-Nazis. Khan was present at the Unite the Right rally and counter-protest in Charlottesville in 2017 in which protester Heather Heyer was mowed down and killed by James Alex Fields Jr.

The most striking thing about White Right is how vulnerable her subjects appear. This is detectable and tangible, despite their extreme opinions. It is conflicting for us and, obviously, Khan. Ken Parker, who in the movie says he thinks Jews and homosexuals should be exterminated, is perhaps the most vulnerable of them all. Parker, like fellow NSM member Mike Schloer are former military men. Schloer confesses how that part of his life still haunts him. Of course, they hold extreme and repulsive views, but Khan finds the humanity in all of them. 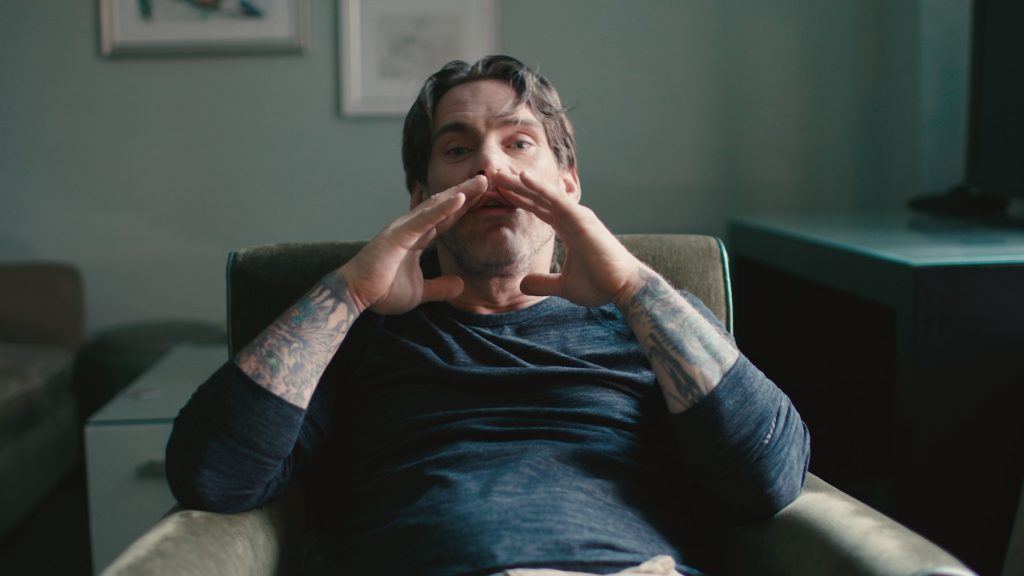 Frank Meeink used to be a Neo Nazi, but has since changed and now works against hate and racism. Photo: Fuuse.

The most emotional moment of the film comes with the NSM PR Director of 11 years Brian Culpepper. Culpepper, who had previously said he would have Khan deported, calls her to tell her he has left the movement, partly due to how she was treated by people within the white power movement.

“It was one of the most moving things I’ve ever experienced. To leave after so many years, it’s a very isolating and a very brave thing to do. It restores your faith, in a way. It doesn’t make his opinions and his actions okay but just the fact that that possibility exists and to experience that in front of me is a very precious thing to see,” Khan says.

It clearly moved Khan, who says that her telling her own story and experiences was crucial to open the cracks and find common humanity.

“If we’re going to try and sit and understand each other it’s going to have to be on the basis of my humanity and your humanity. What they’re not convinced of is my humanity. When they’re faced with that – that’s what I believe made it possible, on both sides.”